The pandemic forced the cancellation of last year’s AT&T Byron Nelson, whose two previous incarnations had struggled at Trinity Forest Golf Club. Its southern Dallas location confused White people. Its treelessness invited heatstroke. Even The Pavilion, that bacchanal tent under which so much Michelob Ultra had flowed when it stood at the Four Seasons, couldn’t get people swinging. So they moved the tournament to TPC Craig Ranch, in McKinney, and organizers promised to “bring the party back.”

But you knew all that already, didn’t you? My apologies. What you don’t know: now that Tim has attended Round 1, how will he write a blog post that breaks down his thoughts into three categories as determined by the title of a 1966 spaghetti Western starring Clint Eastwood? Ah, here we go.

The trees! Craig Ranch has them. They provide shade. Although yesterday’s wondrous weather meant they weren’t needed much, as far as spectators were concerned.

The galleries. With only 12,500 fans allowed per day, even following Jordan Spieth (paired with his hometown hommies Will Zalatoris and Scottie Scheffler) was no sweat.

The parties. I drank a Michelob Ultra Organic Seltzer Cucumber Lime at one point yesterday. I am not making this up. That’s how crazy things were. But no kidding: there are lots of places to perch and responsibly exercise your elbow while watching wheel-to-wheel golf action. You’ve got your ULTRA Club, your Choctaw Club, your Cadillac Club, and, of course, your The Bunker Presented by Garrison Brothers Distillery. I know there’s a definite article awkwardness going on there, but I feel like The Bunker Presented by Garrison Brothers Distillery, no matter the sentence construction, deserves its “the.” When I left the course after play had ended, The Bunker Presented by Garrison Brothers Distillery was looking like it was giving the old The Pavilion a run for its sobriety. PRO TIP: there is a small public, unnamed (so far as I can recall) bar on an elevated walkway near No. 17 green, between the corporate skyboxes, that offers a great view of No. 18 tee. I mean, it’s stunning how close it is to the players.

The food. I ate lunch in a corporate skybox. All three taco varieties were delicious. So were the spicy elotes.

The parking. It’s shambolic, not to put too fine a point on it. I parked in the small handicap lot, which is so far from the main (and only) entrance that it really makes no sense. I’m guessing conservatively that it was half a mile. A coconspirator had a parking pass for a different lot that, he discovered upon arrival, was underwater. He was directed to a nearby stadium lot, team affiliation undetermined. When he got there, he was told all the spots were full. Cops directing traffic couldn’t offer a definitive alternate parking environment. So the coconspirator just found a spot on one of the many confusing streets that crisscross the sprawling and under-construction Craig Ranch development. Thankfully his car was still there when he again needed it. PRO TIP: charter a helicopter to drop you off at the front gate.

I watched Jordan Spieth chunk an easy chip on the short par-4 No. 14. He shot a 9-under 63 yesterday, putting him in a tie for first. He should have had the lead to himself. (He finished Round 2 today tied for second at 11 under. (Update: when all the players were in the clubhouse, he was tied for sixth.))

This is really the only important part of this post. I would like to publicly thank the folks from the Salesmanship Club, those red-pantsed angels scattered all across the course.

The reason I parked in the handicap lot is because I was with my father-in-law, whose arthritis has limited his mobility in recent years. He’s got the blue handicap tag. Having looked at a map ahead of time, it seemed to us that the jaunt from the handicap lot to our destination in the skybox overlooking No. 17 green would be a short one. We were wrong.

It would have been impossible for him to walk from the handicap lot to the course entrance. I had to wave down a passing Efrogs cart. Once inside, he walked as far as he could, but it became clear we were in trouble. We found a place for him to sit down. I tracked down two Red Pantses sitting in a cart and explained our situation. Without hesitation, they picked up my father-in-law and drove him to the skybox, no short trip by any means.

At the end of the day, we used the same method to get back to our car. I walked up to a Red Pants and asked for help. Three rides in total. Each time no hesitation to help. Each time a lifesaver. I wish I’d taken note of the names of the kind men who literally made it possible for my father-in-law and me to watch some golf together. I’d love to thank them personally. This post will have to do.

“Did you notice,” my father-in-law later asked, “that each time they thanked us? They said, ‘Thank you for coming today.’” It was a small thing. And huge.

So when you see a Red Pants carrying one of those styrofoam cups late (or sometimes even early) in the day, just know that he deserves it.

Thank you to everyone in the Salesmanship Club. What you do to support the Momentous Institute is a massive help to the city. What you did yesterday was a minor miracle for two guys who will never forget it. 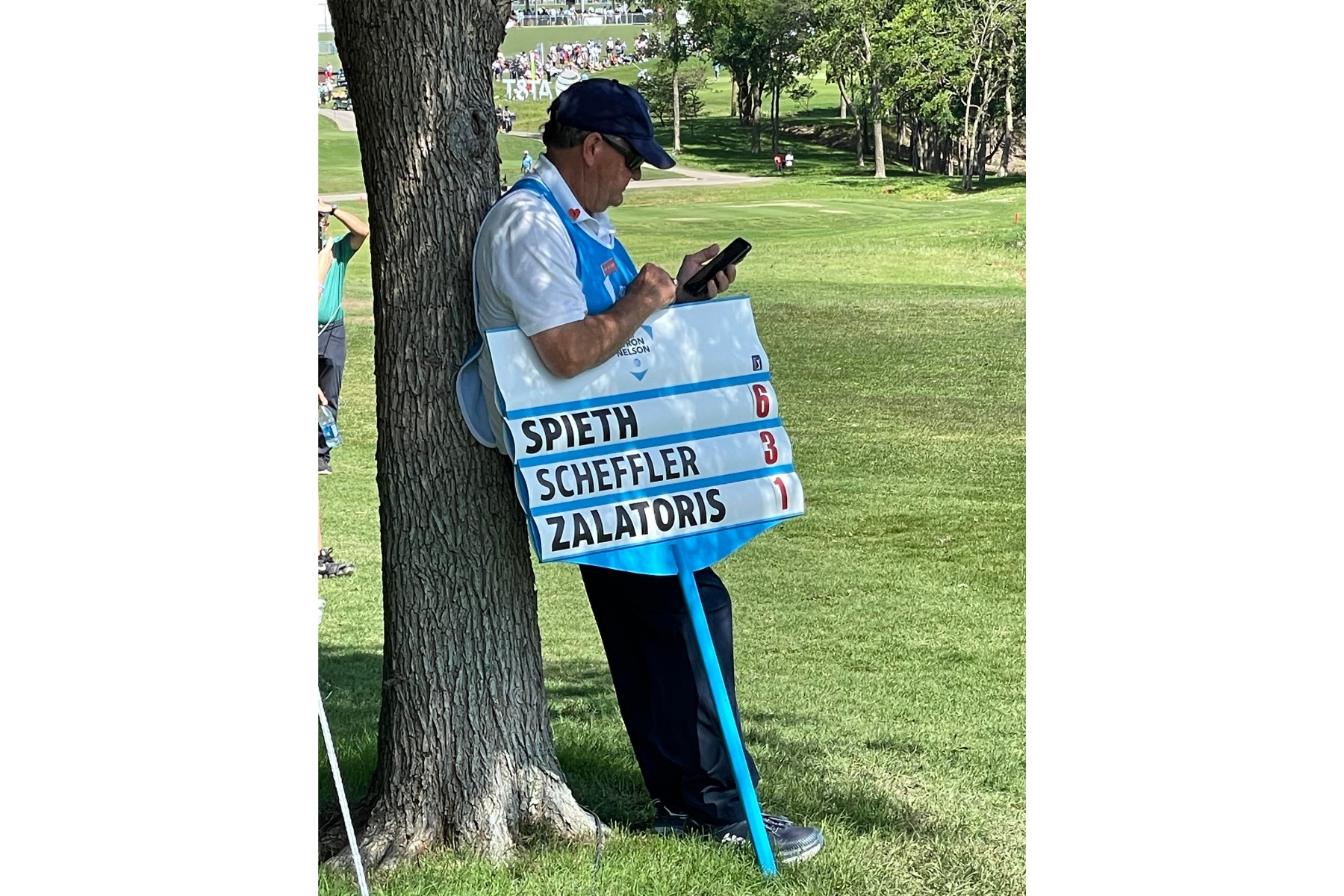 What are these folks called? Anyway, this one found a tree under which to check his Twitter. 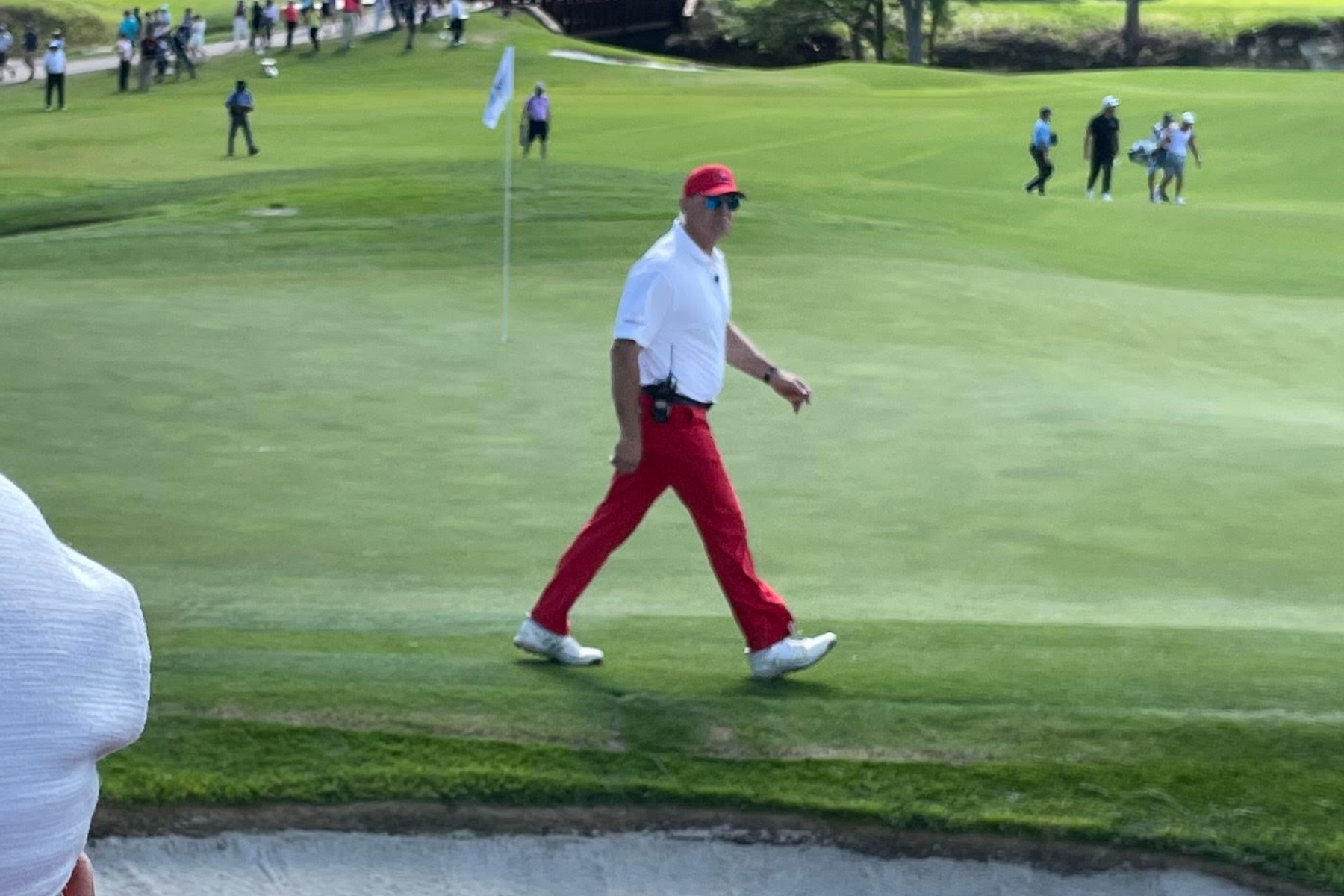 There is one Red Pants who is unlike the others. He follows Spieth around. He doesn’t have a nametag. He looks like he could crack walnuts between his pecs. And he watches the crowd, not the golfers. This, my friends, is Spieth’s bodyguard. Do. Not. Test. Him. 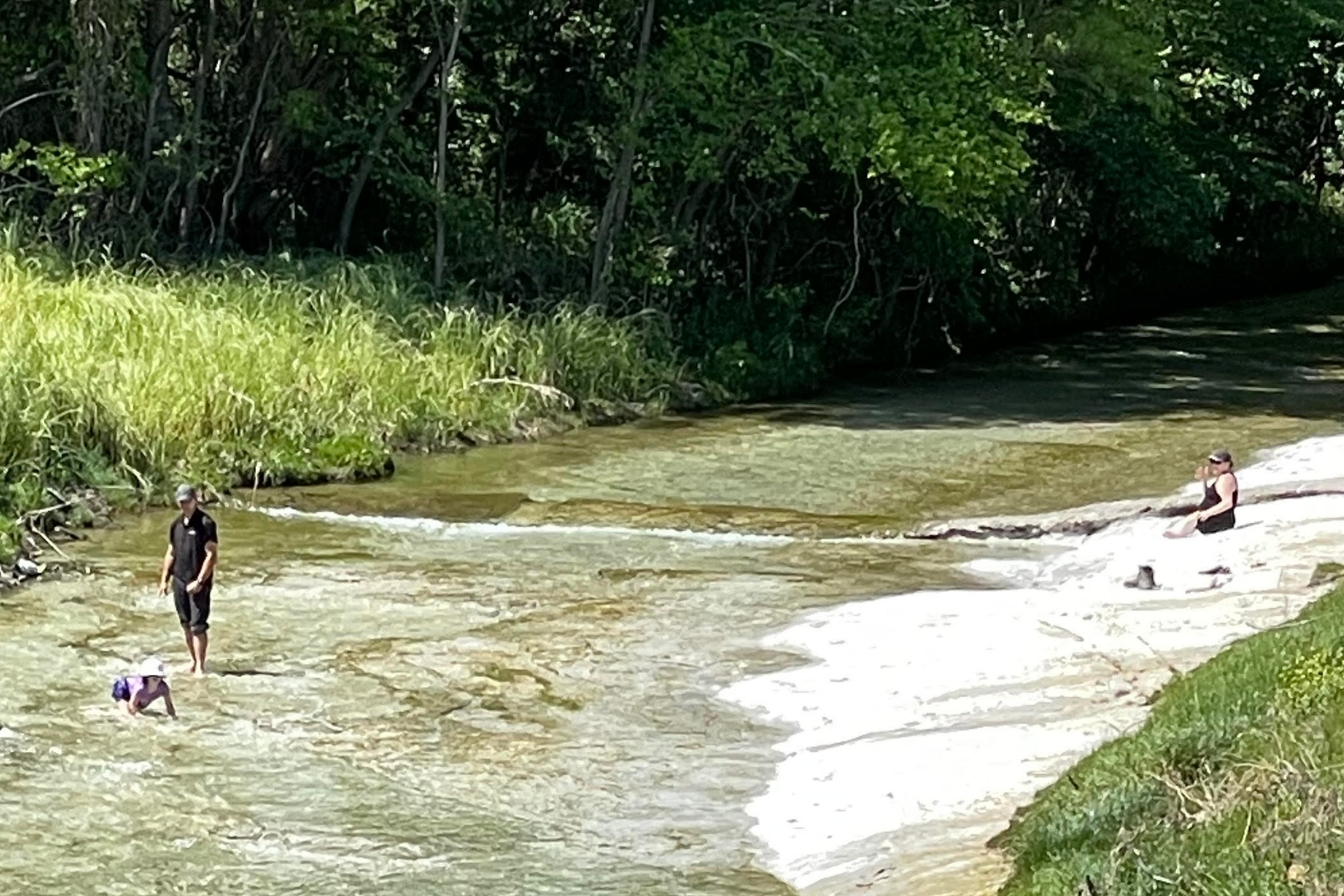 Weird deal. I spotted a family that had parked their own cart alongside a creek that bisects hole No. 14. Their daughter was playing in the water. Shortly before Spieth teed off on the hole, five bicycle cops shooed them off. 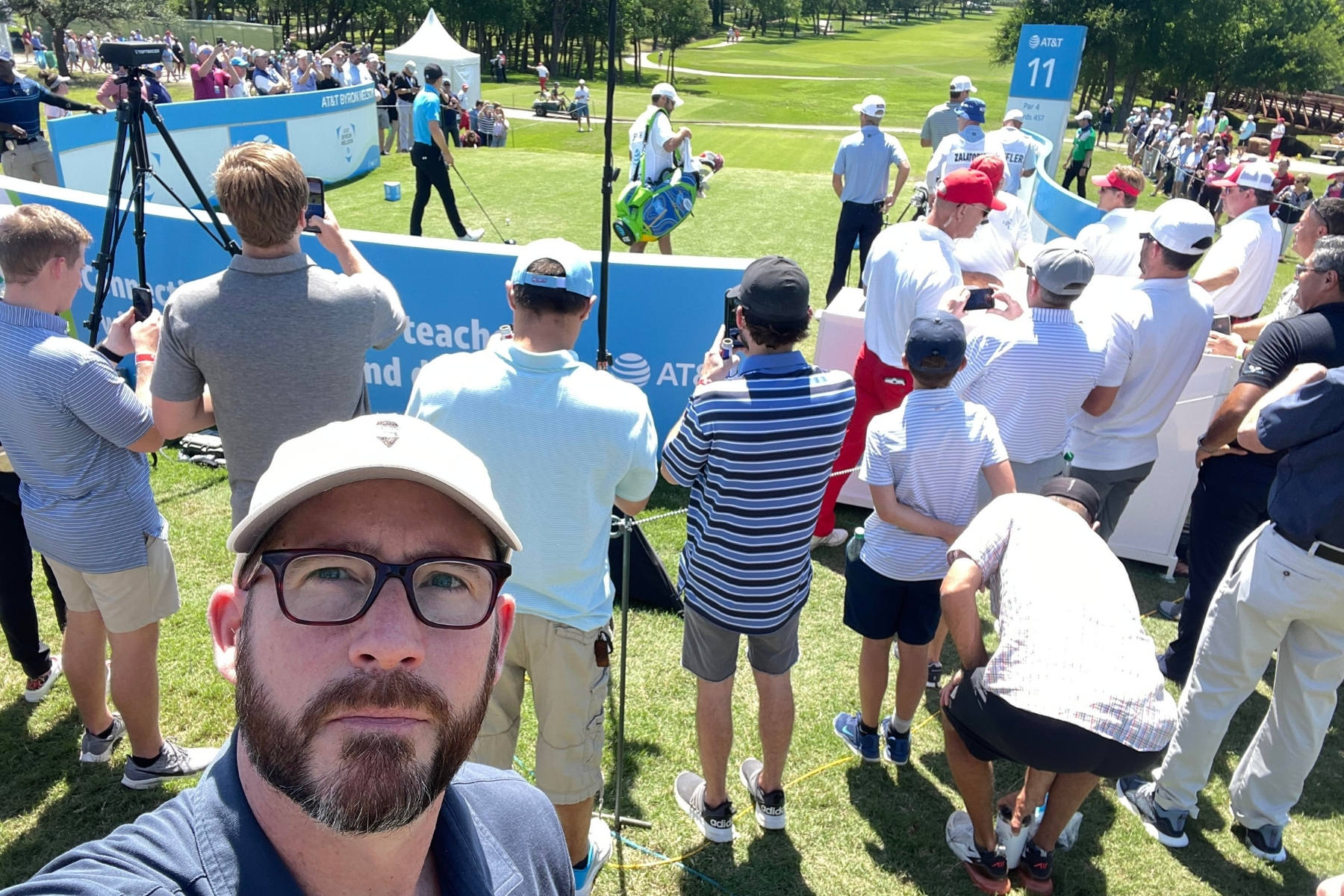 Spieth was kind enough to take this selfie with me before he teed off on No. 11.
Tags: