Dallas Polling Sites Were Down for Hours on Election Day

'We’ll never know, I suspect, how many people literally did not get to vote in this election that wanted to,' Mayor Eric Johnson said.
By Alex Macon | May 12, 2021|5:58 pm
Advertisement

Snafus downed 9 polling locations for as many as four hours during Dallas City Council elections on May 1, showing that there were more Election Day problems than had been previously reported. [Update: 9 polling locations were temporarily closed, with other issues reported at two others; the original headline of this story has been changed to reflect that.] This emerged Wednesday as City Council members grilled Michael Scarpello, the county’s election administrator. They further decided in a 11-3 vote (one council member was absent) to tell off the Dallas County Elections Department by refusing to pay it to run the upcoming runoffs scheduled for June 5.

“We’ll never know, I suspect, how many people literally did not get to vote in this election that wanted to,” said Mayor Eric Johnson, who appeared to be the most pissed of several very displeased council members—and who, despite not appearing on the ballot, already had reason to be unhappy about the May 1 election. “That wouldn’t be OK in a presidential election or gubernatorial election where millions of people are going to get to vote.” In a low-turnout election like this one, where races could be decided by a few dozen votes, “we should be outraged,” Johnson said. The mayor’s preferred candidate in District 7, Donald Parish Jr., missed the runoff by just 25 votes.

Several of his colleagues agreed, including council members Carolyn King Arnold, in South Oak Cliff, and Cara Mendelsohn, in Far North Dallas, both of whom likened the issues on Election Day to voter suppression. Mendelsohn and other council members also pressed Scarpello on what they described as inefficiency and waste in how the elections were run.

Speaking to council members and in a phone interview afterward, Scarpello acknowledged systematic issues in the elections department that created problems on Election Day. But overall, the “ability to vote” in this election far exceeded the ability to vote in municipal elections in 2019, he says. There were more polling locations, which were open longer—accounting for 415 more hours during early voting and 1,100 more hours on Election Day, or an overall 19 percent increase from two years ago, Scarpello said. This was the first local election in which Dallas County voters were allowed to vote at any polling location in the county, both during early voting and on Election Day. And turnout this year was consistent (which is to say, pretty low) with past municipal elections.

“There were no obvious problems as far as having a net effect on the election,” he told me.

Dallas County’s elections department was responsible for 468 polling locations on Election Day. More than 250 of those were in the city of Dallas. Scarpello shared details on which ones were down, why, and for how long. Looking at a hastily put-together Google Map shows that most of the issues were concentrated in southern Dallas. 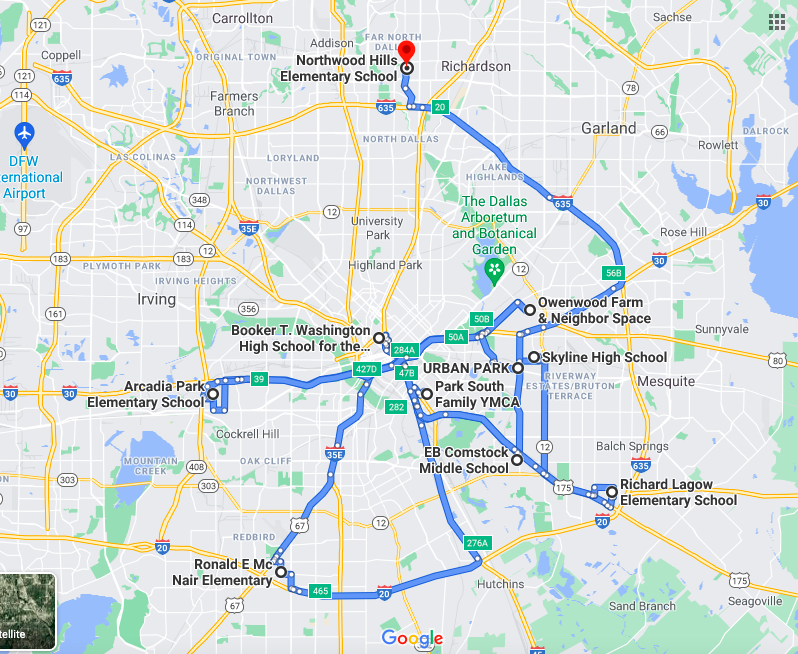 Scarpello, who started the job in December, says the elections department has in the last several years started using new voting machines, and the shift to allowing voters to visit any polling location required adjustments that in many cases still need to be made. (Mendelsohn, for example, questioned the apparent redundancy of two under-attended polling locations that were across the street from each other—Scarpello says state law prevented his office from moving locations from past elections until after this most recent election).

While many of these issues could be attributed to user error, Scarpello made a point of defending poll workers. “I don’t think we’ve provided that good process and that good training yet, to just start telling people they’re doing a bad job,” he said.

The COVID-19 pandemic and record turnout for last year’s presidential election further delayed organizational changes that Scarpello says should address everything from equipment to poll worker training to logistics. Among other things, the elections department is planning a “wholesale change” in its training materials, and is hoping to staff up a communications team that could, for example, let voters know they can vote at any polling location in Dallas County. “Those are the systematic problems we’ve got to address that we simply can’t do overnight,” he says. “This is a major redesign of the way we do business.”

Mendelsohn called for a “much more thorough investigation” into what went wrong on May 1. Arnold, who said that many people may have been denied their constitutional right to vote, added that if there were further problems in future elections, she “would be the first one to advocate we move to the Justice Department.” In the meantime, city council members made clear they don’t want to foot the bill for next month’s runoff. (Council members Chad West, Adam Medrano, and Lee Kleinman voted in favor of the almost $1.5 million contract for the elections department to handle the runoff; Councilman Adam Bazaldua was absent for the vote. Everybody else was against it.)

So who is going to pay for it? “That’s part of what I’m trying to figure out now, is to figure out what the next steps for the county are,” Scarpello says. “I’m not clear what the city’s intent was with the vote.”

The mayor suggested the elections department use whatever money was left over from the city’s payment to run the May 1 election, and that Dallas County pick up the rest of the tab “in recompense” for “an egregious failure to do your job.”

Whatever happens, they don’t have much time to figure it out. Runoff elections are on June 5.

A candidate in a tight City Council race filed the lawsuit after polling locations were downed for hours on Election Day.
By Alex Macon
Politics

What You Should Know About Early Voting in Dallas

The most important thing? It starts today.
By Alex Macon
D Magazine Directories