The Texas Department of Transportation believes its redevelopment of Interstate 30 near downtown aligns with how President Joe Biden plans to spend the federal government’s mobility money. So the state is going after a lot of it.

The federal Infrastructure for Rebuilding America Grant, or INFRA, is a $900 million grant program targeted at projects that will boost the economy and create jobs. In past administrations, that has meant highway expansions. But after his confirmation, Transportation Secretary Pete Buttigieg reshaped the program’s criteria to prioritize projects that featured components to improve racial equity and the environment, favoring those that took comprehensive, collaborative approaches to inform their plans.

TxDOT believes its vision for the Canyon checks a lot of the boxes the feds are looking for. It attempts to restore the street grid the freeway tore apart when it opened to traffic in 1965, giving the Cedars more direct connections with downtown. (TxDOT’s argument: “While the CBD and areas north of I-30 have enjoyed decades of growth and dense commercial development, the area south of I-30 has struggled to thrive, with a fragmented mix of underutilized and underdeveloped parcels, falling far short of the potential that its centralized location would support.”)

The plan features bridge crossings at Lamar/Botham Jean Blvd., Griffin, Akard, Browder, Ervay, Harwood, and Cesar Chavez. Those are planned to include Complete Street elements like wide sidewalks, protected bike lanes, and greenspace. The overhaul frees up about 14 acres of land for private redevelopment, mostly by removing ramps and surplus frontage roads. There are plans for connections to DART’s light rail as well as the planned high-speed rail; that station will be built on the western end of the Canyon. The state is also leaning on its plans for pedestrian-friendly infrastructure and green space to lessen the environmental impact of the freeway.

Too, TxDOT is leaving open the possibility of up to four deck parks to connect downtown with the edge of South Dallas; that money will have to come from other sources. While the design will vary somewhat, Klyde Warren Park and the deck park over Interstate 35 in Oak Cliff cost about $60 million total; the infrastructure itself was $47 million while the park additions added another $13 million.

The state is asking for $146 million from the INFRA program, which would pay for about a quarter of the entire project. The feds haven’t released the full list of applications from other states, but that ask is more than all but two applications submitted for the program in 2020. (California wanted $220 million for a port upgrade and Louisiana requested $185 million for the second phase of its expansion of Highway 1, which extends diagonally across the entire state. Louisiana got $135 million, but California wasn’t awarded the grant for the port.) 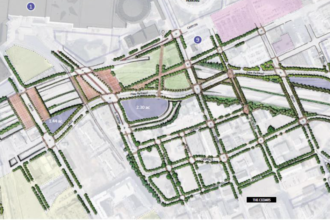 The western edge of the proposed Canyon project. (Photo courtesy city of Dallas) 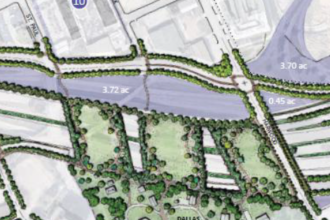 A new parkway that will run adjacent to the freeway and be at-grade with the proposed deck park. (Photo courtesy city of Dallas) 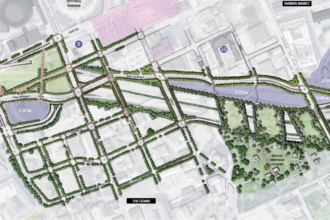 This is the future the city envisions for the Cedars below Interstate 30. Note the deck parks. (Photo courtesy the city of Dallas) 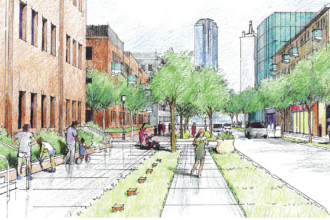 A re-imagined Browder Street, in the Cedars. (From TxDOT's CityMAP study.)
TxDOT's plans for Interstate 30 around the Canyon, between downtown and Deep Ellum.

As the Washington Post reported, cities and states are working on a tight timeline. They had just four weeks to submit proposals after the guidance changed to prioritize minimizing climate change and helping improve racial equity in neighborhoods separated by highways. The paper’s transportation reporter asked the state whether it had to reconfigure its application. It hadn’t; these principles were baked into the project.

The state’s plan for Interstate 30 began in 2016, with the City Master Assessment Plan, or CityMAP. That was TxDOT’s effort to think about how to build around the many highways that crisscross Dallas, focusing on ways to connect the neighborhoods on either side, free up developable land, and make the surrounding areas safer for pedestrians. TxDOT’s application details the CityMAP process, clearly trying to appeal to the parameters that the planning process be comprehensive.

While departments of transportation in other states had to scramble to meet the new criteria, TxDOT showed the public its priorities as far back as 2019, when it revealed its plan at the downtown Omni. And now Buttigieg’s transportation department is speaking a similar language.

“The I-30 Canyon project invests in safety, multimodal connectivity, and mobility on highway and rail corridors of national significance while reducing the interstate’s negative impacts on the local transportation network and social and economic fabric,” reads the state’s application.

Construction is set to begin in 2024, with or without the additional federal help.