Conflicts over political yard signs—and where candidates are allowed to put them—are practically a feature of campaign season in Dallas. Most of these conflicts don’t lead to police reports and accusations on social media that a city council candidate “threatened to have me shot by his cousin.” This one did. There’s a lot of ground (some of it buried in 196-comment Facebook thread) to cover, and some lingering points of confusion. Nevertheless, here’s the gist of it.

Venton Hill-Jones came home Tuesday and noticed a political yard sign in the empty lot that sits next to his Oak Cliff home. Hill-Jones, CEO of the Southern Black Policy and Advocacy Network, said in a phone interview Wednesday that he and his husband keep an eye on the property on behalf of the elderly woman who owns it. After seeing the sign, for District 4 City Council candidate Johnny Aguinaga, Hill-Jones says he called the property’s owner to ask if she’d given her permission for it to be there. She hadn’t, Hill-Jones says.

So he removed the sign and sent Aguinaga a message on Facebook telling the candidate to come pick it up: “I really hope you and other campaigns are getting the necessary permissions to place your materials before you move forward in the future.”

A quick back-and-forth followed; Aguinaga said that “my cousin paid the guys on that land $40” to put up the sign. Then Aguinaga wrote the messages that led Hill-Jones to file a police report and share the screenshots of their conversation in a Facebook thread that, as of Wednesday afternoon, had 196 comments and counting: “You need to [sic] out it back or I’ll have my cousin go deal with you. He carries heat too. He likes trouble like you.” In his caption with the screenshots, Hill-Jones wrote that Aguinaga “just threatened to have me shot by his cousin.” 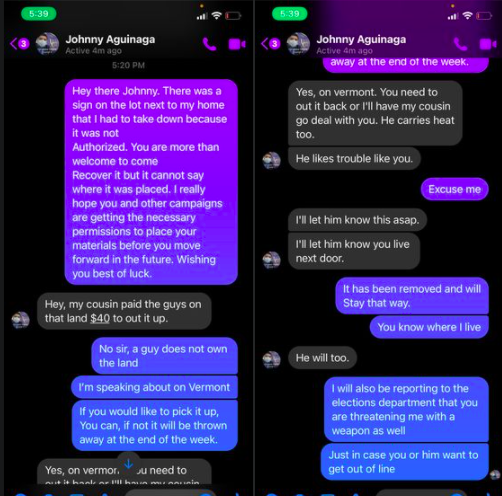 Hill-Jones says Aguinaga was likely referring to a Facebook post he’d made earlier that afternoon, in which Hill-Jones shared a photo of three handguns and tagged himself at the DFW Gun Range and Training Center. “I am a licensed gun owner and I was just at the range after I left the office that day,” he says. He was not carrying a weapon when he removed Aguinaga’s sign from the lot next door, and made no direct mention of guns in his communications with the council candidate, he says. “What he took from that, or what I assumed he took from that [earlier Facebook post], was a need to respond to me in that kind of violent way,” Hill-Jones says.

In text messages on Wednesday, Aguinaga says he had received permission from the family of the property owner to put his campaign sign on the lot next to Hill-Jones’ house. And Aguinaga had in fact seen the Facebook post showing Hill-Jones at the gun range on Tuesday. Some time after making that post, Hill-Jones “went rampage on my signs and invited me to his house to pick them up but [didn’t] want to tell me where they [were] at,” Aguinaga says. “I took it as a threat and mentioned in slang terms that I’ll send someone that does have a license to carry like him and likes trouble like him to talk about this situation. I was scared to go myself. I’m scared of gun toting rage people.” 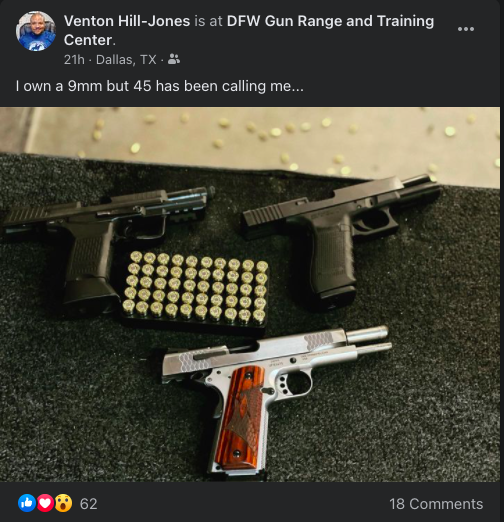 Hill-Jones had posted on Facebook earlier that day he was at the gun range.

Aguinaga, one of four candidates challenging the incumbent to represent a district including parts of South Oak Cliff and southern Dallas, says the kerfuffle is the result of “political rivalry, false stories, stolen signs and misunderstanding.” He says Hill-Jones is supporting one of his opponents in the upcoming election. Hill-Jones says he has not publicly endorsed any candidate.

Both men are precinct chairs for the Dallas County Democratic Party and live in the same district. Each said they’d never had any prior confrontations with each other. Hill-Jones says they connected on social media and had brief conversations on Facebook before this week, but those communications had never been acrimonious.

At some point after their initial exchange on Tuesday, five more Aguinaga campaign signs appeared on the lot, says Hill-Jones. He has filed a police report regarding the messages about Aguinaga’s supposedly heat-carrying cousin. “I don’t want anything outside of him staying away from my property and making clear that threats like that aren’t going to happen,” Hill-Jones says. “If something were to happen, the story is out there. Out of fear for me and my husband’s safety I posted that.”

Aguinaga says it’s Hill-Jones who has committed a crime by removing the campaign yard sign. He says he spoke again Wednesday with family members of the woman who owns the lot, and maintains he had their permission to put signs on the property. It was unclear whether he’d spoken directly to the woman whose name is on the tax rolls for the land. Hill-Jones says he has spoken with her, and that she is still not authorizing any signs on the property.

Got all that? Early voting starts April 19.