Dallas Is Missing More Than 2,000 Miles of Sidewalk

There will soon be a plan to fix the city's broken sidewalk system. But who's going to put the plan into action?
By Alex Macon | April 19, 2021|3:35 pm
Advertisement

Dallas has crummy sidewalks. If you’ve spent any amount of time walking here, you already know this. And If city officials didn’t already know this, they certainly do now that the early returns are in on a survey meant to inform a forthcoming “Sidewalk Master Plan.” It’s one of several such previously adopted or still-in-the-works master plans (including the city’s own separate but related strategic mobility plan) that tell us just how badly we’ve stepped in it over the last 70-plus years of car-centric transportation planning. These plans also show us a better way — if city council members decide to pay for it.

The preliminary data, collected and analyzed by design consultants Kimley-Horn and presented Monday to the city council’s transportation committee, show that the city right now has a sidewalk system covering more than 4,500 miles. That sounds like a lot until you read the next bullet point, which reckons there are more than 2,000 miles of roadway with missing sidewalk. As with so many things, sidewalks in Dallas are not equitably distributed: 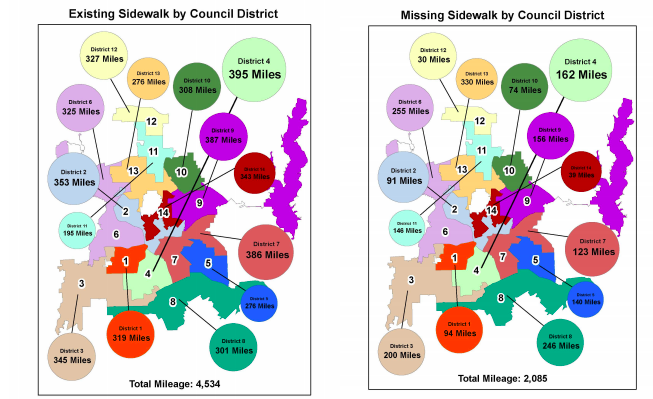 The consultants looked at more than 1,000 survey responses and used information gathered in public meetings to help identify areas of particular need. They also considered:

Taking all that into account, Kimley-Horn created a sidewalk prioritization map:

And a list of very specific neighborhoods where sidewalks could make a world of difference:

Identifying these focus areas isn’t the end of it. Not the start, either. The timeline calls for “report and implementation” in June, when the Sidewalk Master Plan will be readying for its big debut. Then the city can start building out sidewalks, remaking streets to be hospitable to people on foot and furthering Dallas’ transformation into a more walkable, equitable, sustainable place.

“The goal of this plan is to prioritize sidewalk needs so that as funding becomes available we can do it,” Public Works Director Robert Perez told city council members, who seemed to agree that Dallas needs better sidewalks. These are, it should be said, members of the same city council that scrapped to no end over a comparatively measly $7 million in police overtime funding last budget season. In a couple months, these city council members will have a sidewalk plan. But will they have the political will to come up with the millions and millions of dollars it’s going to take to make Dallas stop hating pedestrians?

The event is virtual and free this year.
By Will Maddox
Transportation