Each weekday, Dallas County Judge Clay Jenkins reports a number of local deaths attributed to COVID-19. It’s a grim reminder of the toll the pandemic continues to take on our community.

But in terms of understanding the current state of the virus, it’s an unclear data point that isn’t a snapshot so much as it is an accumulation of the prior days and sometimes weeks. Like so much in this pandemic, it’s confusing, a blurry image of the severity of the coronavirus in the county that doesn’t always match the counts from the Texas Department of State Health Services.

The county says its process of confirming deaths is necessary to identify any errors in the data it receives from the state. When Jenkins reports a certain number of fatalities through the county’s press releases, casual observers are likely to understand it to mean that those people died recently.  In reality, the total is whatever the county could confirm that day despite when the death actually occurred. His chief of staff confirmed this definition, though it is not readily available in any of the county’s press releases.

“I think it’s probably a default interpretation that what is being reported happened that day or the day before,” says Dr. Timothy Bray, the director of the Institute for Urban Policy Research at the University of Texas at Dallas, which manages its own COVID-19 data dashboard. “If the daily number reported is big, we’re alarmed by it. If the number is small, we celebrate it. … But they didn’t all occur that day.”

The pandemic exposed the fine art of presenting data to the public. With many different data points coming from many different sources, the potential for misunderstanding what the data say is quite high. According to Chris Van Deusen, the spokesman for the Texas Department of State Health Services, the state uses death certificates as the basis for its total.

Lauren Trimble, Jenkins’ chief of staff, says the county health department “found that there are many errors in inclusion of non-Dallas County residents or erroneous attribution of cause of death” in the state’s data. In response, the county implemented additional checks to verify both residency and cause of death as a way to get more precise data.

These additional checks, while adding precision to the county’s fatalities, have caused a backlog in the number of deaths verified by the Dallas County epidemiologist and reported by Jenkins each weekday. In the case of Jenkins’ daily death counts, there is a risk that people will misunderstand what the data actually reflect, particularly when it is uncritically repeated in the media. Practically every major publication has done this, D Magazine included.

When you compare the state’s data with the county’s, beginning with the start of the pandemic in March 2020 through the end of last year, you’ll find there has always been a small lag between the deaths reported by the state and those reported by the county. But the seven-day averages—thought to be the clearest way to understand the trends of this pandemic—were always at least in the same ballpark.

That appears to have changed near the end of last October. From November 2020 through the end of January 2021, Dallas County reported about 880 fewer total deaths than the state did. From February 2021 through today, the county played catch-up, reporting about 1,044 more total deaths than the state. At its highest point, in late January, the daily difference between the two entities was 1,175 deaths. Today, the county is still about 100 deaths behind the state’s count. In all, Dallas County is reporting 3,872 deaths since the beginning of the pandemic while the state has the total at 3,962. When the discrepancy was at its height, you can see how a large variance can adjust your impression of what’s actually happening.

Dallas May is an environmental engineer who first noticed the divergence between the daily numbers reported by Jenkins and those verified by the state.

On April 7, the self-professed data wonk shared a graph via Twitter that compared state death numbers with those reported daily by the county. It was accompanied by a concerned statement: “Dallas County fatalities are at a 10-11 month low…. Or they are as bad as they have ever been with dozens of people dying each day. Kinda depends on who you ask.”

A simplified version of the graph is presented below. What it shows is that some time in October, the trend lines between the data sets began to diverge. Numbers of deaths reported daily by Jenkins were regularly lower than what was broadcast by the state. Then, around February 1, this mismatch switched. Since then, Jenkins has consistently reported higher numbers than those confirmed by the state. 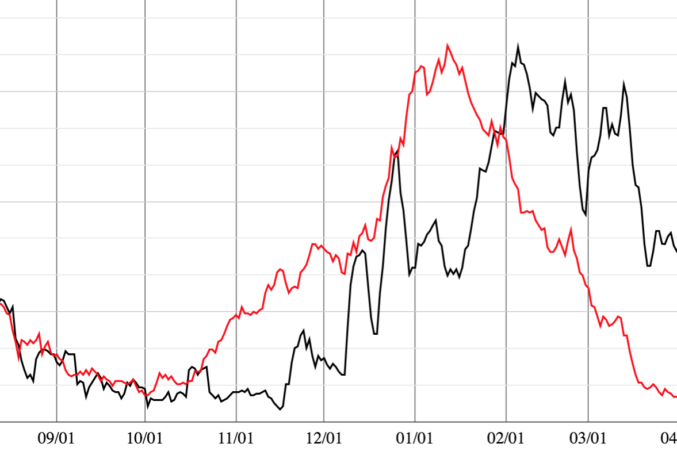 The key reason for this divergence is that the county’s process to verify deaths takes more time than the state’s calculations. The state simply reports deaths based on death certificates, which can take up to 10 days, Van Deusen says. Checks conducted by the county can take longer. Weeks, even months.

To his credit, Jenkins regularly shares a graph that tracks the trend of when deaths actually occurred in Dallas County, based on data verified by county epidemiologists. The graph appears to line up well with death data reported by the state. But it doesn’t get the same sort of attention from local media and the public. That may be because the blurry graph is buried three pages deep into the press release, while the daily death count is prominently reported in Jenkins’ daily tweets and atop the reports.

What results is an odd sort of gulf, where the story that’s playing out in the community is not necessarily reflected in the data that is most often seen by the public.

Perhaps it’s time Jenkins reconsider his approach to reporting deaths. Or at the very least, for the media to reconsider citing the county’s daily death count in their headlines. Because while the trends are improving, the pandemic isn’t over yet, and we should all strive to provide a clear picture of exactly where we are, Bray says.

“We may be at the end of the tunnel on this pandemic, but it’s really highlighted a couple of key changes we need to consider,” says UTD’s Bray. “Developing the narrative around these numbers is important. Communication is a two-way street. It’s not just what I meant. It’s what somebody heard.”