If there is one issue driving Dallas City Council candidates this election season, it’s public safety. That’s fitting. More than 60 percent of the city budget’s general fund is typically spent on public safety, including the police and fire departments, emergency management operations, and court and jail services. Spending on police alone accounts for about a third of that general fund. On May 1, voters will choose the 14 people who have the power to shape that budget—Mayor Eric Johnson is in the middle of his first term, but every other council seat is being contested.

Candidates also focus on public safety because they know it’s a subject voters care about. As they should. Violent crime in Dallas is up, although nobody really knows why or what to do about it, and crime statistics in general are notoriously difficult to interpret and apply. Regardless, people have a right to feel safe no matter where they live. Meanwhile, protests sparked last summer by the killings of Black men and women by police officers have brought renewed national attention to police violence and to long-standing racial inequality in the criminal justice system. This inequality shows in Dallas as much as anywhere else. To take one example of many, Black people in this city have long been disproportionately arrested for nonviolent misdemeanors like marijuana possession. That’s as much a public safety issue as the crime rate.

Is that what City Council candidates talk about when they talk about public safety? Sometimes. Bust most candidates this cycle are referring to the council’s vote last year on the city budget, and to a supposed effort by a group of council members to “defund the police.” This is disingenuous, and the hangover from that vote is driving a lot of the politicking going on right now. It’s worth quickly recapping what happened last year, when activists and residents called on the city council to divert up to $200 million from the police budget to fund other city services.

Although a few council members initially showed a little more appetite for reallocating a small amount of police overtime funding toward things like bike lanes and affordable housing, what they wound up deciding in a 9-6 vote was to use about $7 million from the overtime budget for other public safety measures, like hiring more civilian workers for the department. The approved overall police budget of well over $500 million was actually up from the prior year. Nobody on either side of the debate was much thrilled about all this. Regardless, it was hardly a major cut to police funding.

Yet that’s the picture painted by figures including Gov. Greg Abbott as well as political groups of unknown origin. That vote is further cited by some of the challengers running against incumbents who supported the modest changes to the budget. Mayor Eric Johnson was among those who opposed cutting the overtime funding. He’s not letting anyone forget it, writing this month in his email newsletter to residents that about 90 percent of this year’s budget for police overtime has already been spent. “It was bad budgeting, and that was clear from the start,” Johnson wrote. “You deserve better. Something like that should never happen again.”

Johnson, whose frosty relationship with many of his council colleagues burbles below much of the campaigning this election season, is backing (publicly or otherwise) at least three challengers to incumbents he split with on police funding: Chiropractor John Botefuhr over District 9 Councilwoman Paula Blackmon, South Dallas pastor Donald Parish Jr. over District 7 Councilman Adam Bazaldua, and former Park Board member Yolanda Williams over District 5 Councilman Jaime Resendez.

“We’re not interested in police reform,” says Nora Soto, an organizer with Our City Our Future and In Defense of Black Lives, who was part of the activist push during city council budget talks last year. “Any type of reform usually means more money for the police force. We are interested in defunding. I don’t think there’s anyone on city council who would be up for that.”

Soto described a sense of disappointment and fatigue after the council balked on pulling money from the police budget last year. “It doesn’t help that COVID is ongoing and people are still being killed on the street by police,” she says. She mentioned a few candidates who might be more sympathetic to activists’ demands come this budget season, including Changa Higgins, who has been a leader in calling for police accountability in Dallas and is running against Bazaldua in a crowded District 7 race. Soto also named community organizer Hosanna Yemiru, one of four candidates running to replace term-limited North Dallas incumbent Lee Kleinman in District 11. Yemiru has expressed a willingness to address public safety issues outside of policing.

The Dallas Police Association, the department’s largest union, has endorsed attorney Barry Wernick in District 11 and former city spokeswoman Sana Syed in District 2, where several candidates are looking to succeed a term-limited Adam Medrano. The union also endorsed developer and investor Leland Burk, who’s running laps around his four opponents in fundraising as he tries to secure the North Dallas seat being left empty by a term-limited Jennifer Staubach Gates. The association has made endorsements in two other contests where the outcome seems relatively foreordained, backing incumbents Adam McGough (8) and Cara Mendelsohn (12). The DPA has not made endorsements—a reasonable barometer in judging which candidates are most expected to back steady or increased police funding—in other closely contested races, including those three where the mayor has apparently signaled he’d like to see his colleagues lose.

The union is waiting on the likely inevitable runoff elections, says DPA President Mike Mata, who remains critical of those council members who supported redirecting overtime funding. He reserves his harshest words for Bazaldua in South Dallas. Mata didn’t necessarily love the budget that was approved last year, but he wasn’t too displeased—if the department runs over budget, which it might, the city will still have to find a way to pay officers for overtime hours worked. It’s worse, he says, that the council members acted “just to appease a small but loud activist group.” If that’s the case, council members like Bazaldua might have failed: The District 7 incumbent, who was the lead sponsor of the budget amendment moving the $7 million in overtime funding, seems to have succeeded in making enemies of the cops who wanted to protect the police budget as much as the activists who wanted to defund it. 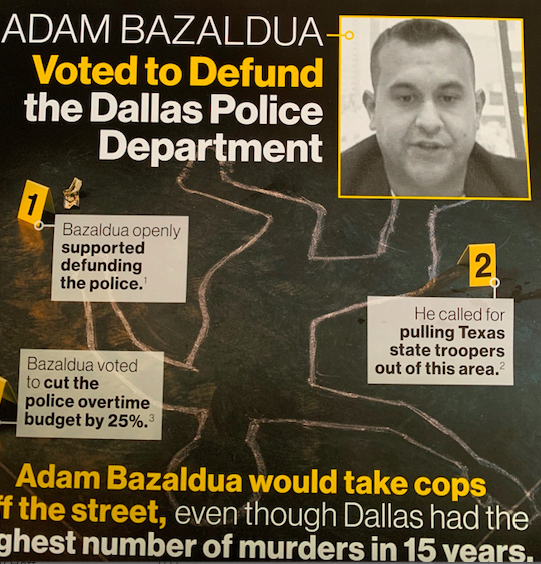 Mata says efforts to shift police funding may continue, regardless of whether the word “defund” is used. “We talked them down to $7 million. So it’s $7 million this budget. The next budget are they going to ask for $14 million? Are they going to ask for $21 million?” He is open to suggestions of finding new approaches to issues that often intersect with police work—as long as they don’t take money from the police department. “They’re absolutely correct that we cannot arrest our way out of mental health and drug addiction and homelessness,” Mata says. “But let’s fund it without touching public safety.”

He says he supports programs like RIGHT Care, which was expanded last year using money from the general fund that did not come from the police department. A collaboration between the Parkland Health and Hospital System, Dallas Fire Rescue, and the Dallas Police Department, it teams police officers with social workers, paramedics, and off-site mental health experts to respond to mental health emergencies reported to 911. The program has been hailed for reducing violent incidents, keeping people out of jail, and connecting residents to mental health services. (Without taking away from the police budget, the city council last year also dedicated money to expanding the Office of Community Police Oversight as well as programs training police in de-escalation and in reducing implicit bias.)

Soto, the activist with Our City Our Future, likes the idea behind programs like RIGHT Care, but says it is too intimately tied to the police department. Officers are still responding to mental health calls alongside social workers, even if they’re not taking the lead. “Communities don’t want more police,” she says. “We do not need reform. We do not need more training. We need to defund police and reallocate that money to resources for the community.”

She says there remains a groundswell of support for defunding the Dallas Police Department, evidenced in part by last summer’s protests. The mayor, who at the time inaccurately blamed “outsiders” for the violence that occurred at what were largely peaceful protests, said during last year’s budget debate he had heard overwhelmingly from Dallas residents who supported maintaining or increasing funding for the police. What might make a difference on May 1—and during any budget debates that may come later this year—is how many people in either camp show up to vote.

“We already have a base in Dallas,” Soto says. “They know what community care is because it has been keeping them safe all their lives: safe from policing. The alternatives [to policing] are not new. They are the basics of looking after one another. That’s how people feel. We just have to grow our base and help the residents of Dallas.”

Activists plan to survey residents, as they did last year, to inform their demands. Whoever’s sitting on the city council in a few months will again hear calls to defund—actually defund—the police. “I really hope to see some change after these elections, but either way the work continues,” Soto says.

Until then, it sounds very much like the arrangement Dallas had before the protests. Don’t let disingenuous mailers convince you otherwise.