The staff of the Dallas Weekly is still surprised by the outpouring of community support after the South Dallas newspaper’s office was vandalized overnight last Wednesday.

“It was pretty overwhelming how many people were irate about it and then wanting to help,” says Patrick Washington, the newspaper’s CEO. “It was pretty heartwarming that so many people stopped by. People were bringing by wood and everything else to help fix it.”

Employees arrived at the office Thursday morning to find its front glass door and window shattered. Someone threw three rocks through the glass on the office’s front façade, but it didn’t look like anyone entered. The interior of the office was untouched.

“We haven’t had much in the sense of vandalism or anything like that in quite a while, which is why I think it was so surprising,” Washington says. “It was kind of shocking to see.”

Community leaders reached out in force, including South Dallas Councilman Adam Bazaldua and the office of Mayor Eric Johnson.

Washington says he filed a police report and the department is investigating. Jessica Washington, the paper’s chief operating officer, said the repairs cost about $800.

“(That) may not seem like a lot a money for some, but for Dallas Weekly, that’s a major and unnecessary financial hit,” she said. “We are hoping to maybe see some footage via the police camera sitting right in front of our building.”

The newspaper is one of the oldest Black-owned publications in the city of Dallas. Tony Davis founded the Dallas Weekly in 1955 and by the 1970s, he’d grown it into the city’s largest Black newspaper. James Washington, Washington’s father, bought the paper in 1985 and handed it to his son in 2019. Despite financial hardships and attacks like the one on Thursday, the paper remains an important outlet for Black voices in the community. 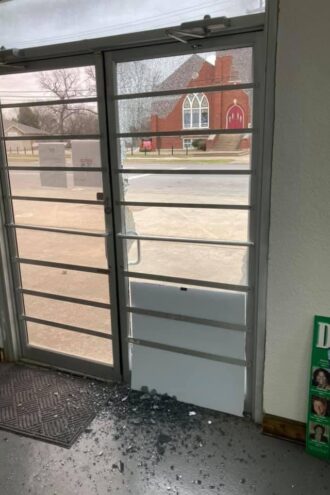 The scene at the Dallas Weekly after it was vandalized.
Courtesy Jessica Washington

Thanks in part to all of the community support, the Dallas Weekly was able to connect with Glass House of Dallas to repair the damage over the weekend. However, this is not the first time the Weekly office has been broken into.

“Most recently it was the same thing, just in a different window,” Washington says. “In the past there have been a couple break-ins here in there, but that is over the whole time we have been in this building.”

They didn’t wait to get back to work. The next issue publishes on Wednesday.