Identifying the largest polluters in North Texas isn’t impossible. The Texas Commission on Environmental Quality keeps tabs on this sort of thing. It shares emissions data with the Environmental Protection Agency, so that the federal government can enforce the Clean Air Act. It releases that same data to the public, without much fanfare and dumped online in hard-to-parse spreadsheets. That’s a problem for those of us who panic at the sight of Microsoft Excel and who can’t immediately tell our volatile organic compounds from our particulate matter.

And it’s why researchers at Paul Quinn College’s Urban Research Initiative have just shared a report making all that data much easier to understand. There are maps showing the biggest sources of industrial air pollutants. There are explanations of the various types of pollutants as well as their effects on the human body–none good. Names are named. Nicknames are named. The report refers to the biggest polluters across North Texas as the “DFW ‘Dirty 30.’”

Evelyn Mayo, a fellow at Paul Quinn College and a paralegal who has for years advocated for eliminating racist zoning patterns in southern and West Dallas, wrote the analysis. Mapping the biggest industrial polluters in the area reinforces some of what environmental advocates already knew: Neighborhoods in southern Dallas and West Dallas, home predominantly to Black and brown residents, carry what Mayo calls a “disparate pollution burden” in the city.

Mayo, who also chairs the environmental advocacy group Downwinders at Risk, has been part of the team working on the SharedAirDFW Network. That network, which is still growing, relies on air monitoring sensors placed across North Texas, all collecting up-to-date data on pollution. (The most recent pollution data from the state is from 2019, although Mayo says it’s a useful benchmark, with few major variations in such a span of time.) Until that comprehensive network is up and running, reports like this one help provide the best picture of where major industrial air pollution is coming from.

Mayo says making pollution data more accessible also gives community groups and residents the information they may need to fight for cleaner air in their neighborhood. “Residents don’t just have to deal with it,” she says. “These are choices that were made at the state and city level, and there are levers you can pull in your community.”

It took that sort of neighborhood activism to finally move Shingle Mountain. Now in West Dallas, a group of neighborhood residents is challenging the permit renewal of the GAF asphalt shingle plant. “There is a way for neighborhoods to create their own plans,” Mayo says.

According to Mayo’s report, here are the biggest sources of industrial air pollution in Dallas County (click the image to enlarge it): 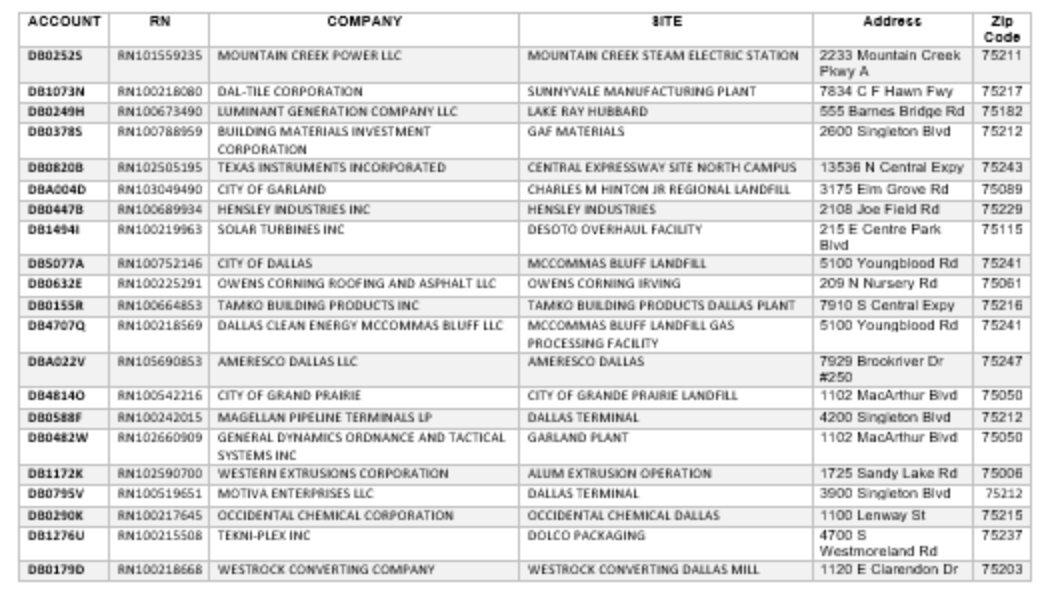