I once watched a car head west on Abrams Road, pull into the bike lane, then drive for a hundred or so feet to make a right turn. The car was able to drive through the protected bike lane because of a significant gap in the raised dividers that were ostensibly there to protect cyclists. The opening existed because that section of the street had previously housed a bus island. But the city had removed it.

Like many of my East Dallas neighbors, I have been excited to see the city of Dallas install a Complete Street project on Abrams/Columbia/Main Street near my house. The section in question was built in the 1970s to connect Abrams Road and Columbia Avenue, slicing through Junius Heights’ street grid and creating a series of awkward angles at various intersections.

Well before the work being done on the street, it was overbuilt. With three lanes in either direction for much of the road, cars going far too fast can whip through the neighborhoods and businesses, including a school zone. This led Nathaniel Barrett, a real estate developer who lives near Columbia, to advocate for funding a Complete Street project for the area in the 2017 bond. The new design eliminates one lane of traffic in each direction, adds a protected bike lane each way, and, for a time, included one bus island so that DART didn’t have to occupy that protected bike lane while it picked up riders. Complete Street projects have a goal of creating a multi-modal street that better serves the neighborhoods and businesses in the area—and makes it safer for people who aren’t in a vehicle. It is one of a couple dozen projects around the city. There are 27 in Dallas, with six more under construction and 14 in the design phase.

The bus island was a curb-level concrete area between the bike lane and car traffic where people waiting for the bus can safely wait so that the bus doesn’t have to pull into the bike lane to pick them up. It was a signal that bicycle traffic is being prioritized along the route, a rarity in car-centric Dallas.

But then one day, the bus island near the intersection of Reiger Avenue and Abrams in front of Juliet Fowler Communities was gone. So what happened?

In short, too many drivers ran into it, so the city took it out. Even though cycling infrastructure and pedestrian-friendly developments are slowly on the rise in Dallas, the car is still king. No more bus islands are being built at the moment because drivers can’t seem to figure them out.

“The bottom line issue was we had some visibility issues that were causing problems with folks running into the bus island. We tried various ways to alleviate that, and it just wasn’t working. So a decision was made to remove the bus island,” says Chris Turner-Noteware, a city engineer and the assistant public works director for the city of Dallas. “At this point, we’ve not come up with a design that we like and that we feel is going to alleviate the issues that we had on Abrams. We’re continuing to investigate that design for bus islands. But they’re not being placed in projects right now.”

After the bus island was built, the city tried to get drivers’ attention by adding signs and stanchions. But cars kept hitting the structure. The city decided to yank it out. This means the bus will need to pull into the bike lane to pick up its customers, which is not ideal for anyone. A bicycle would have to stop behind the bus, hop onto the sidewalk, or venture out into traffic on a road that is still home to mostly speeding cars, even with a road diet.

Despite the step backward, the city hasn’t given up on the idea. There are plans for another iteration of the bus island. Turner-Noteware says that they learned from the experience. There will be modifications to how the islands are designed, placed, and striped. She also says the bus island will be built closer to the end of the project and include final striping to make sure it doesn’t blend with the pavement.

Driver education will also be necessary if the bus island is going to work.

“One of the main purposes of these Complete Street projects is to slow traffic down, so there has to be an element of driver behavior that comes along with it,” Turner-Noteware says. “All of those things have to come together to have a successful project.”

The original street design meant this project was never going to be easy. There are several non-traditional intersection angles, with a few jogs, free-flow right turn lanes, and on-street parking along the way. The street also runs through both neighborhoods and commercial areas, which meant the city didn’t always have the right-of-way it needed without acquiring it. The design is only 60 percent complete, the city says. It is seeking public input to inform the final section between Exposition and Carroll avenues on Main Street.

As of now, at two points along the street, the bike lanes require the cyclist to actually cross a street to continue in a protected lane. This happens at the intersection of Abrams and La Vista as well as Columbia and Carroll (the bike lanes are in green in the design below). If a cyclist is traveling east on Columbia, they’ll be in a bike lane on the north side of the street. But that cyclist must cross Columbia at Carroll and continue in the eastbound bike lane, which is suddenly on the south side of the road. Designs like this can be confusing for an unfamiliar cyclist and annoying for a frequent cyclist commuter. But with the section between Carroll and Columbia still in the design phase, that could change. 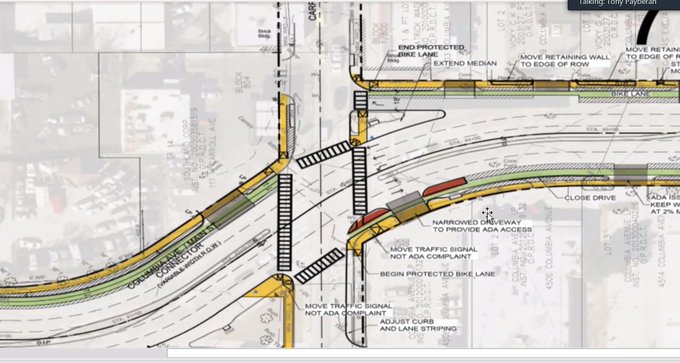 “At a neighborhood meeting and being reminded about this abominable intersection with the bi-directional to uni-directional bike lane conversion,” Barrett tweeted about the design.

Despite the improvements, Barrett would like to see even more of a street diet for the road. “Even with the reductions that you have, it’s still too big or too still too wide,” he says. “It’s still built like a raceway and not like a normal street. I think given the race track-like nature of that portion of Abrams, they should have gotten more aggressive.”

The next public meeting about the project will be in April. The city will present the 60 percent plans for the project, so stay tuned for more information.