Your Next Book: East of Texas, West of Hell

Rod Davis' novel is "a maelstrom of meth dealing, human trafficking, and white supremacy."
By Tim Rogers | February 8, 2021|11:27 am
Advertisement

Attentive FrontBurnervians know the name Rod Davis. He has done two tours of duty at D Magazine. Heck, you know what? It might actually be three. He’s a friend. Let’s just call it four.

Rod has a new(ish) novel that has been out for a couple months. I’ve been remiss in not bringing it to your attention till now. The title is a great one: East of Texas, West of Hell (NewSouth, 276 pages). Here’s what Publishers Weekly had to say about it: 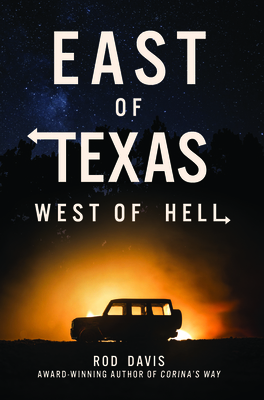 Davis’ Jack Prine returns (after South, America) in this crime powerhouse—a maelstrom of meth dealing, human trafficking, and white supremacy. Prine gets a call from a longtime friend who asks him to find her missing adult daughter, Rose. Prine starts with an address in Atlanta, the only info Elle has on Rose, and finds two corpses behind the house. As Prine perilously navigates an intersecting world of neo-Nazi meth dealers and human traffickers, he learns Rose has been living under an alias. The biggest clues come from a Savannah restaurant Rose had frequented and hoped to work at, where Prine learns more about Rose’s criminal activities. When he realizes he’s in over his head, Prine contacts an old buddy with underworld connections, and the men’s search for Rose uncovers more bodies and more trouble. As the puzzle comes together, Prine learns the truth of how Rose manages to stay alive. The hardscrabble prose sets the perfect tone, and the characters are reliably complex. Davis is a great guide through gritty Southern territory.

Rod says he’s nearly finished with his next novel, this one using Katrina as a backdrop. He also says he’s trying to decide whether to return to Dallas or stay put down near College Station, where they don’t know how to make tacos (my assessment, not his). If you’re one of his many friends in Dallas, drop him a note and tell him to get his act together and move back to the culinary and literary center of Texas.

Dallas’ most important news stories of the week, delivered to your inbox each Sunday.
Rod Davis

Texas Health Resources is a Top Place to Work for Millennials

The health system was recognized for providing work-life balance and care for the individual.
By Will Maddox
Health Systems

After conducting a national search, the health system decided to promote from within.
By Will Maddox
Health Systems