Feeling cooped up and claustrophobic, I had naively signed up a couple of weeks ago for Profound Foods’ Valentine’s Day dinner in their greenhouse in Lucas. Due to Snowpocalypse 2021, the event was delayed until Saturday, when the sun emerged and the thaw began.

Jeff Bednar and his wife, Lee, founded Profound Microfarms as a hydroponic and aquaponic farm in 2014, where they grew rare culinary herbs, edible flowers, and microgreens for chefs in North Texas. A few years later, they started collaborating with other local farms, such as Cartermere Farms in Celina and Chubby Dog Farm in Crockett, to coordinate deliveries and reduce costs, and Profound Foods was born.

When COVID hit, the new distribution network was perfectly situated to shift from commercial to consumer sales. I spent much of the pandemic picking up weekly deliveries of Jubilant Farm tomatoes, Texas Fungus oyster mushrooms, Mill-King milk, Cedar Ridge Egg Farm free-range eggs, Blackland Prairie pork chops, and Our Farmlet’s heirloom eggplants from the Community Beer Co. parking lot downtown. But I’d never had the opportunity to visit the farm in person. (Profound also offers northern pick-up locations and home delivery for certain zip codes, but the downtown location often includes the added bonus of a six-pack of beer.) 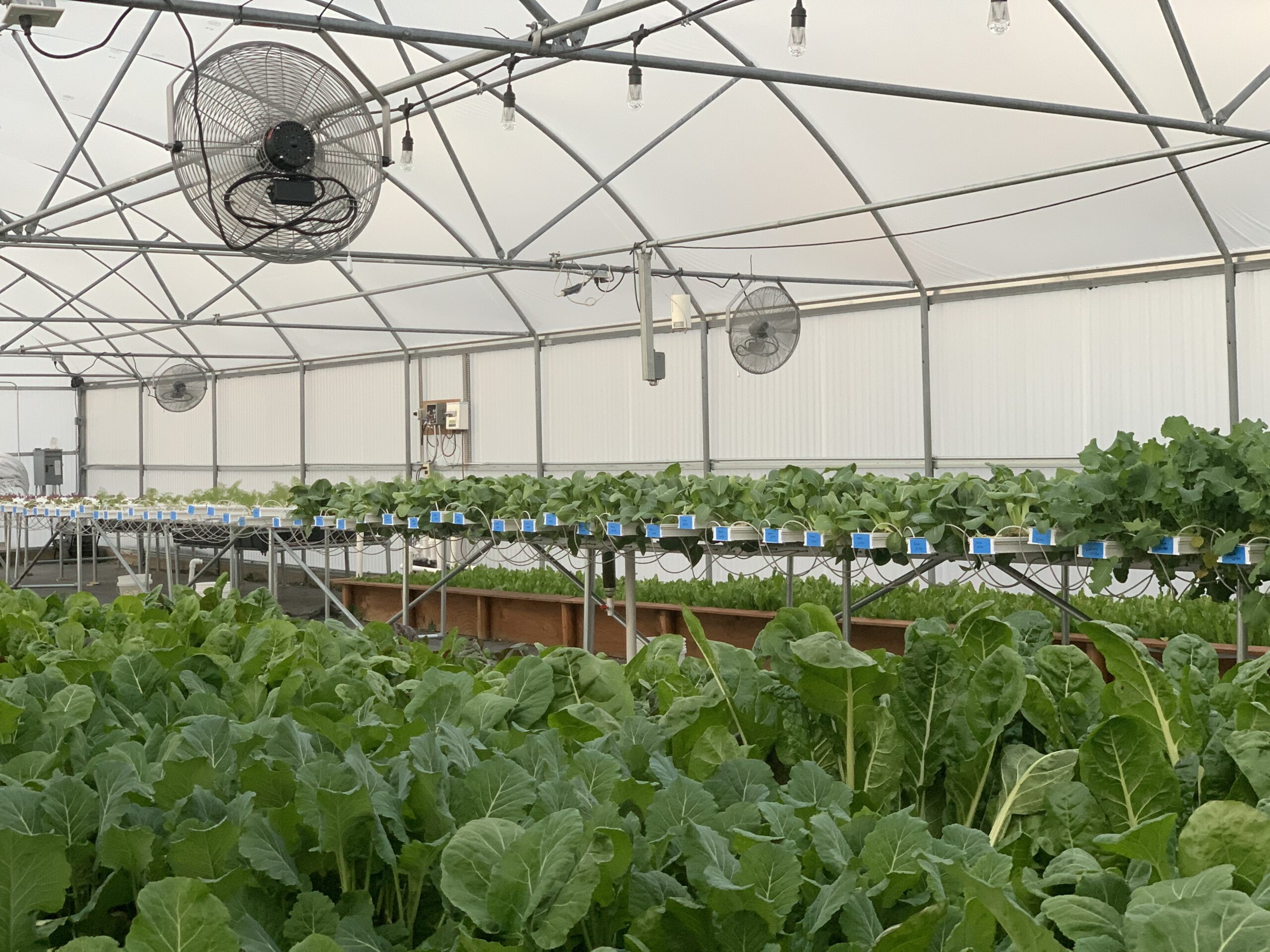 You can order all of these greens for pick-up or home delivery.
Kathy Wise

When my wife and I and the six other couples for the dinner first arrived, Jeff and his daughter Lilly met us at the barn, serving up icy New Amsterdam Gin G&Ts garnished with gorgeous red nasturtiums and flavored with our choice of aged tinctures made from the offcuts of the farm’s produce: common mint, Mexican mint marigold, Genovese basil, or peach. Then we put our masks back on and proceeded on a tour of the greenhouses, applying hand sanitizer and sampling pinches of bronze fennel, sweet alyssum, unicorn celery, and holy basil as we went.

Bednar pointed out the koi and goldfish tanks that feed the closed aquaponic system, noting that the fish had all survived the freeze, they were just swimming a little more leisurely. Aside from some white spots on leaves, he said they suffered little damage from the cold, thanks to being able to stagger their propane heaters and diesel generators to make sure none of the greenhouses got below freezing, even as they experienced hourly power outages for nearly a week. Other farmers in his orbit weren’t so lucky. An egg farmer lost hundreds of chickens due to frozen pipes. Another lost a greenhouse under the weight of the snow. Trees in orchards and crops started for spring planting simply froze.

“It has been an unprecedented week,” Bednar wrote in an email earlier in the day on Saturday. “It has been harder than the first week of COVID-19 shutdowns when we lost nearly all of our restaurant customers. Harder than the hail storm that damaged greenhouse roofs and walls. Harder than leaky water mains that had to be dug up several days in a row until we finally fixed the leaky spot. Harder than losing all our aquaponic fish to over-chlorinated city water. Harder than packing up the kids and dog and heading to our family’s house because of tornado threats. This has been a hard week for us, and we have fared better than many of our farmer friends.” 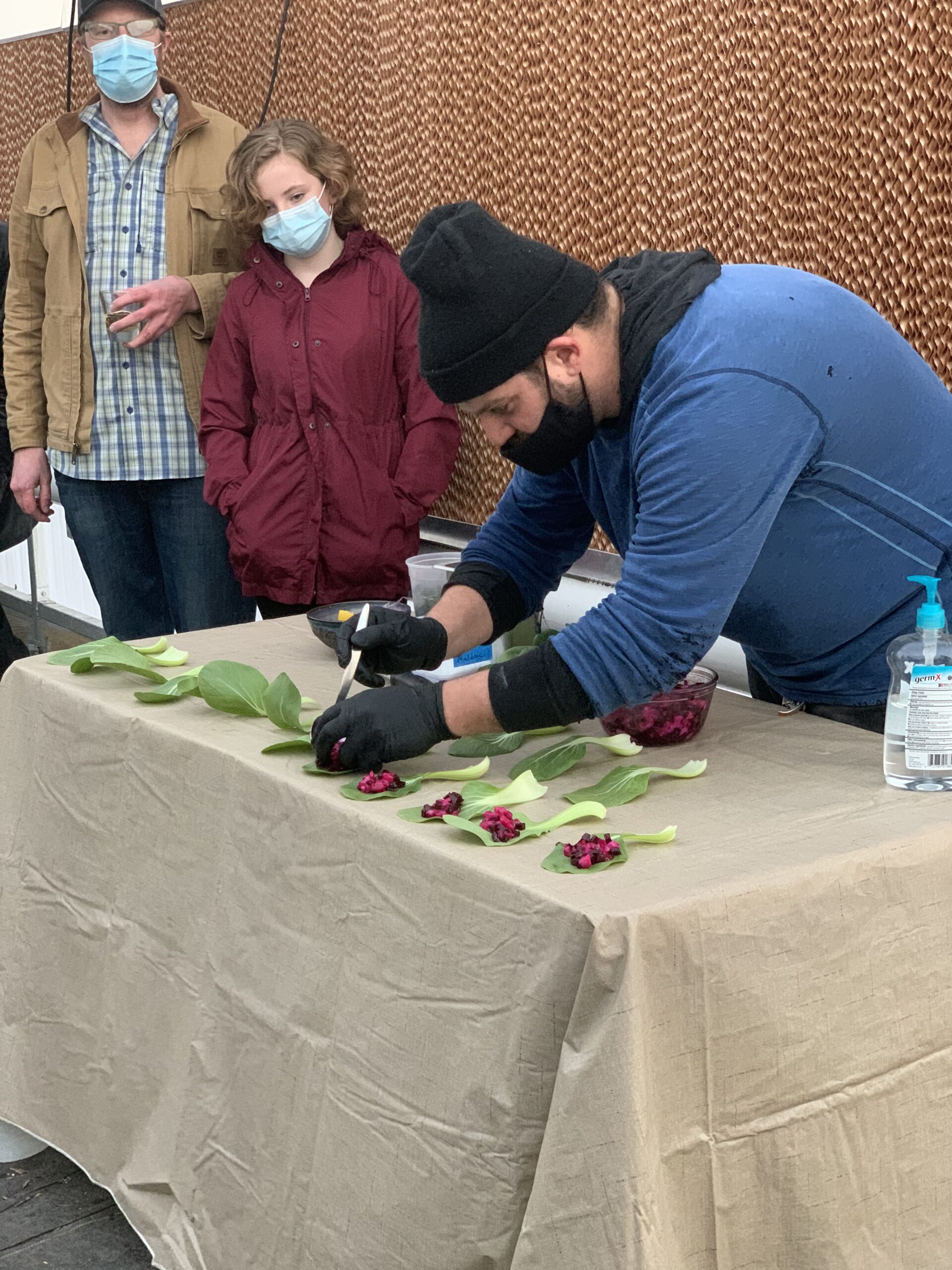 Which all made the rows of leafy green in his greenhouses feel all the more miraculous. We headed into one of the polytunnels, where chef and farm manager Joel Orsini (FT33, Izkina) plated an amuse bouche of pickled beets and scallops onto tatsoi leaves, which we popped in our mouths while taking selfies amid the purple and green rows of vegetation.

Dinner was set up in a toasty far greenhouse under fairy lights, where edible flowers climbed trellises and Bednar showed off his pepper plant collection, which he plans to expand. Orsini had built a wood-fired stove out of cinderblocks just outside the door, where, using a cast-iron pan and griddle, he managed to serve up a six-course dinner. We started with a delicate pickled mushroom tartine on a puff pastry that shattered with the first forkful, and moved on to a head cheese pressé topped with cabbage powder and sweet alyssum florets, and a cube of bison brisket with a puntarelle of chicory and black garlic. My favorite, though, had to be the rich rabbit ragout served over pillows of gnocchi, which had been seared over the wood-fired stove. In closing, there was a bola de fuba, a Brazilian cornmeal cake that Orsini made with Barton Springs Mill blue cornmeal. With the soft texture of a corn pudding, it was barely sweet and topped with a spoonful of fresh ricotta and a confetti of dried citrus, adding a lovely tart explosion to every bite. 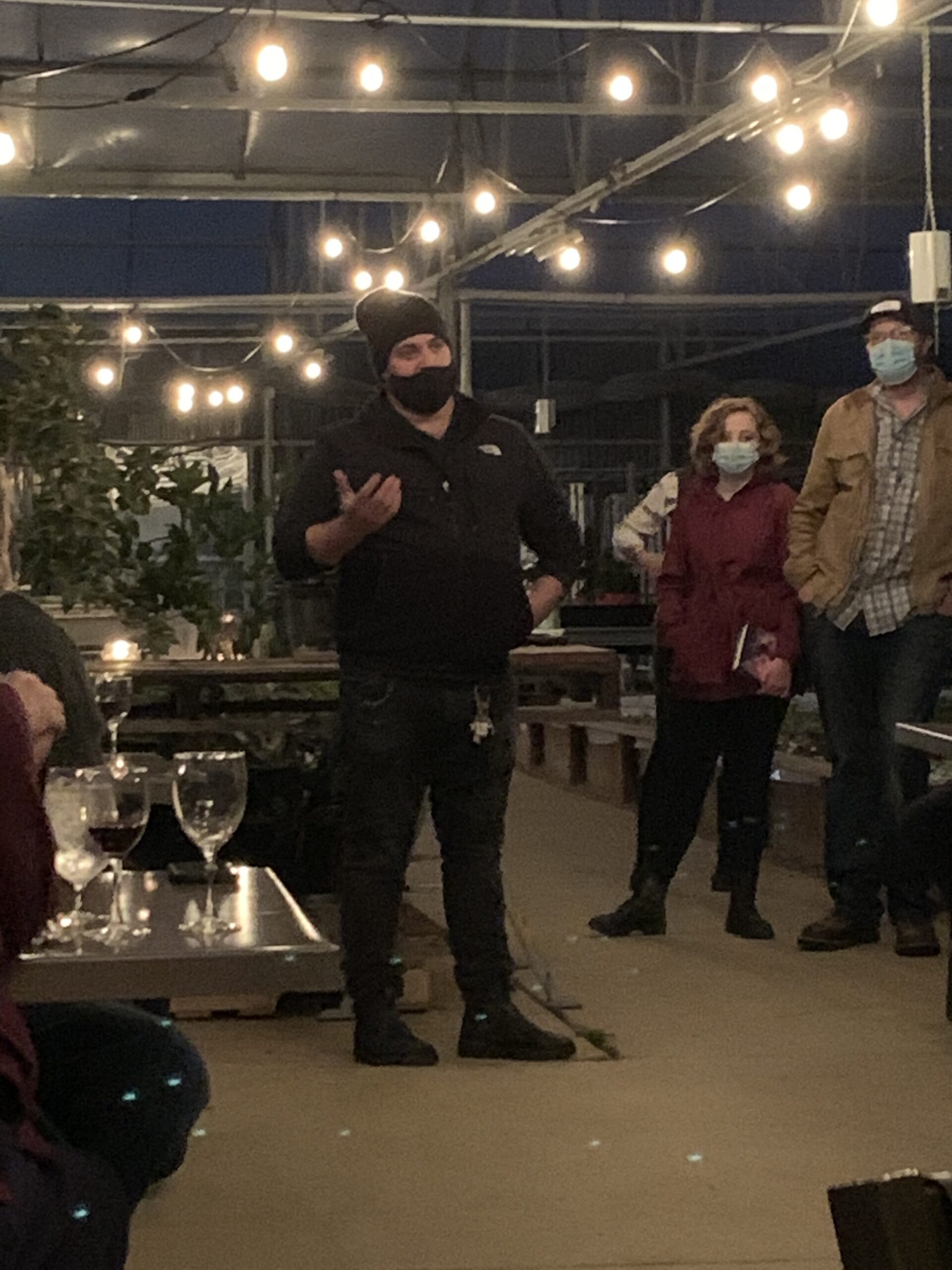 Orsini talks about his dishes (he made that table behind him out of shipping crates).

On a parting dare from a former North Texas mayor, my wife popped an acmella oeracea bud in her mouth. Also known as buzz buttons, electric daisy, or the toothache plant, the South American herb offers a prickling, numbing sensation that activates the salivary glands. Thankfully it wore off by the time we got back around to the barn, where Jeff was serving up cups of hot drinking chocolate, a special blend from Dude, Sweet Chocolate, topped with agastache marshmallows made by Orsini. We were sent home with a box of sugar cookies from Mix It Up, shaped like Bednar’s old farm truck.

It felt like a luxurious French ending to the meal, but with a Texas touch — generous gifts from those who are stretched at the moment to give.