Halfway through the vote on President Trump’s second impeachment, 10 months into a pandemic that’s left the lucky among us healthy but locked in our homes, weeks after the loneliest holidays of our lives — something normal happened.

I went to a park and watched grown men play catch and become little boys again.

It all started with a post on Oak Lawn’s Nextdoor site, the digital neighborhood hangout where people relentlessly discuss dog doo, feral cats, loud music, and man’s general inhumanity to man. But over the weekend, I noticed a new post that almost made me gasp. It was so simple and sentimental, but powerful in the way it affected those who read it. It felt like a message from our old lives, a weak radio signal from the way the world used to be.

Alice Miller, of Turtle Creek, had written, “My 74-year-old husband would like to have a partner to throw the ball with. He is a former high school and college pitcher and is looking for someone who knows how to throw a baseball. He is in good shape and loves baseball.”

Within minutes, there were replies:

“Played for 12 years as a catcher. Would be happy to throw the ball around again.”

“My husband played ball, too, growing up and would love to join in.”

“Wow! Love to see this come together.”

Alice Miller answered each one with a suggestion. “How about 3:00 pm Wednesday at Cole Park near tennis courts?” Soon, there was a post from Sherrie Cleaver, the community advisor for North Dallas High School, asking to get in touch and partner Alice’s husband with the Bulldog baseball team. This was becoming an actual thing.

When I pulled up to the park Wednesday, I felt slightly silly, not sure why I was there at all. People poured from their cars and headed for the tennis courts, excited and not quite sure why they were there either. In the middle of it all was Alice Miller’s husband, Frank, in a Rangers baseball jersey, playing catch, his grin so big his face mask couldn’t hide it. He was back in the game and downright giddy.

“I’ve been missing it, just really missing it,” he said. “It’s awfully hard right now to find someone to play catch with. Can’t throw it in the house. I guess others feel that way, too. It really struck a chord with people.” 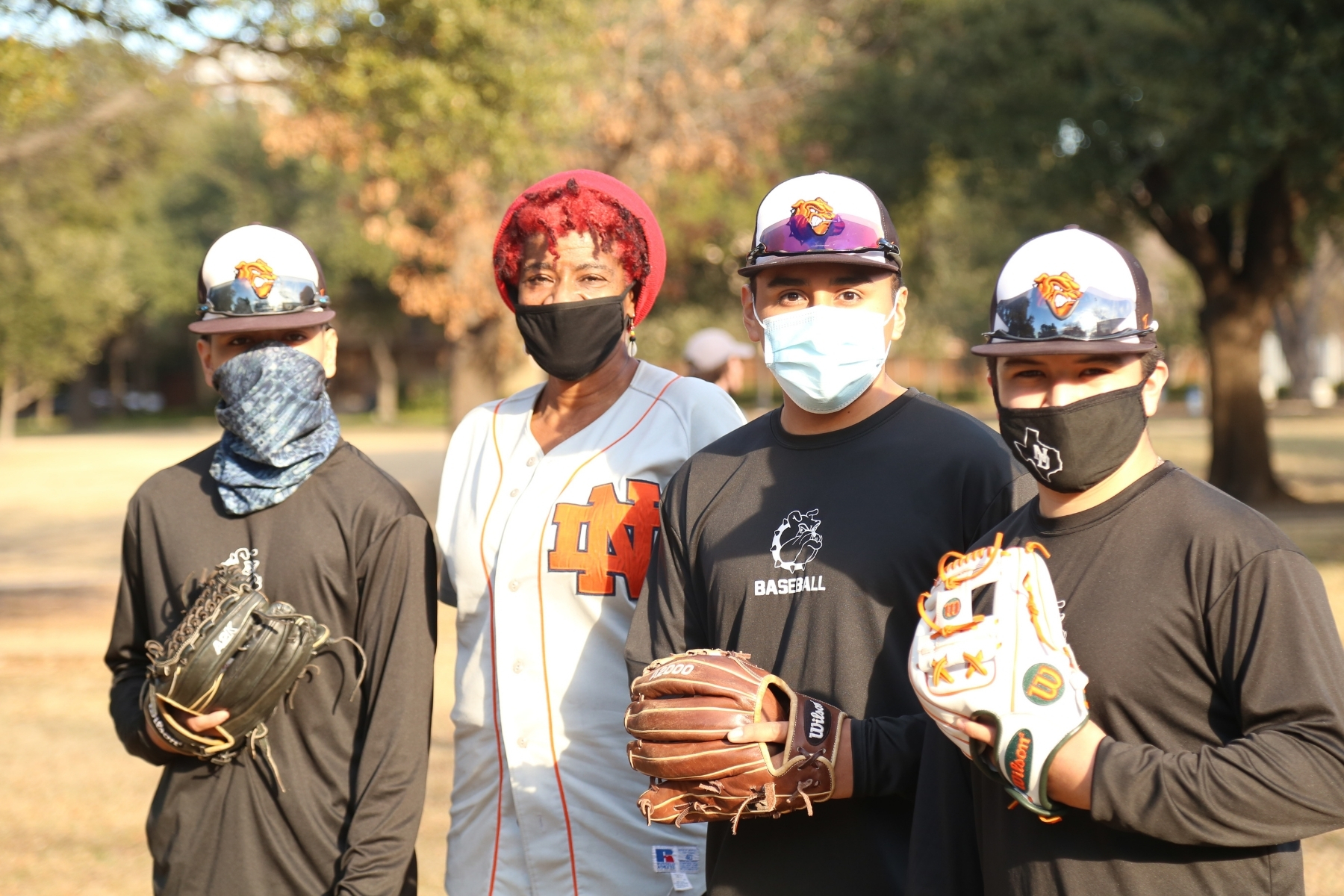 Frank and his new friends marveled at each other’s gloves. “Wow, that glove is 60 years old!” Michael Daughtry remembered aloud getting his first glove at age 5. “A left-handed glove with Reggie Jackson’s name printed on it. I thought it was so cool to be like Reggie.” Frank launched on his memories about Mr. October. “You are right. I had forgotten that! He was a leftie.”

It was all so normal. Except for the face masks and the fact that we couldn’t shake hands. Alice Miller talked about what she missed as badly as Frank missed baseball. “I miss hugs so much,” she said. “Hugging friends. Hugging someone when we meet. Just getting a good hug.”

Sherrie Cleaver showed up with three North Dallas High School baseball players. Julian, Joseph, and Bryan threw fastballs to Frank and his band of never-met-them-before-in-his-life friends. Joseph brought his mitt, a handful of balls, and perspective beyond his years. “Frank was young when he played. Someday that might be me,” Joseph said. “I wanted to see if he still has it. Man, he does!

Frank swooned in the background as he got his best game reviews in decades. “I’ll tell you what,” he said. “These kids are not just great players, they are really nice guys.” Frank has officially been asked to throw out the first ball at North Dallas High’s opening game, February 9. “I’ll promise you one thing. I am not going to bounce it.”

Bobby Estes, athletic coordinator for the school, said that for him this was about more than baseball. “Our school and our kids need to build a connection with this community,” Estes said. “It’s good for everybody.”

“We all need to learn from each other,” said Cleaver, the school’s community advisor. “Learn how to talk to each other, how to feel comfortable with each other.”

It was sunny, and while dogs chased each other in circles, the guys tossed the ball back and forth in elaborate diagonals that gave everyone a chance to catch and throw. Wives laughed about how happy their husbands were to be there. The high school players talked excitedly about their new season. Balls hit the dirt, flew over players’ heads, and rolled toward the street. There was groaning and laughter, bragging and baseball memories — and the constant slap of balls hitting leather.

Frank said he wanted to get as much throwing in as he could that day. He stretched his aching throwing arm. “I’ll tell you, my arm is feeling a little worn out,” he said. “But I gotta take advantage of this. You just can’t play catch alone.”

For all of us who feel like we’ve spent too much time alone, who miss hugs and wasting time doing something wonderful with people you’ve never met before, that moment in the park was a reminder that the old world is still out there. That we can still have fun together even if we are 10 feet apart, that politics and the pandemic can’t take the joy out of everything.

I’m getting a glove.