The city of Dallas owns and maintains about 4,400 miles of sidewalk, but only 1,200 of those miles are undamaged or unobstructed. A Washington, D.C.-based nonprofit that judges how safe cities are for pedestrians says Dallas is more than twice as dangerous as the national average, scoring us just outside the 20 most unsafe cities for walking in America.

In considering parking requirements for proposed developments, the city only takes into account what it means for people in cars, not giving any special favor to projects that may encourage the use of public transit or actually reduce the need for a vehicle. Meanwhile, about half of all fatal and severe vehicular crashes occur on just 8 percent of Dallas’ streets, split between the denser core of downtown, Uptown, and Oak Lawn and the high-speed, six-lane arterials you can find all over town. In 2019, 174 people died in traffic-related incidents and another 920 were seriously injured.

These statistics come from the city’s first-ever mobility plan, a project that has been in the works since the Department of Transportation was reorganized, in 2018. Until now, the city has not formally attempted to account for how transportation policies affect pedestrian safety, as well as land use and economic development. Back in 1991, the city considered the very bad idea of widening Harry Hines to eight lanes through the Medical District. By contrast, this plan calls for the opposite: traffic-calming measures where possible and improved infrastructure to make it safer for folks to get around without a vehicle.

This mobility plan, which was unveiled yesterday in a Transportation and Infrastructure Committee meeting, is called Connect Dallas. It identifies some of the city’s transportation problems and provides guidance to prioritize spending on projects that will make it easier and safer for people to walk, bike, and use public transportation. “It really lays out the foundation for other elements such as housing, economic development, and equity and how all of them connect together,” said Majed Al-Ghafry, an assistant city manager. He called it “the framework for how we move forward … in terms of funding strategy.” 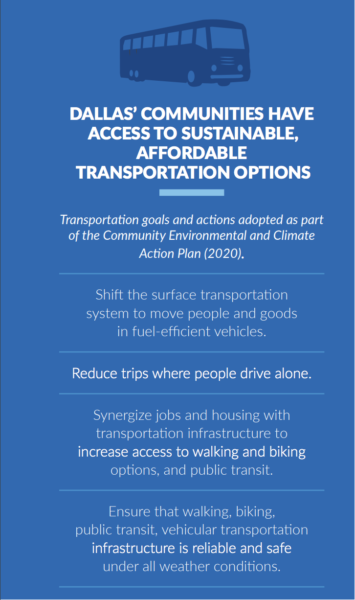 Some of the goals of the city’s new mobility plan.

There have been public surveys, dozens of meetings, council briefings, and a mobility symposium. The City Council’s Transportation and Infrastructure Committee learned yesterday that the 106-page draft was now online. The public is encouraged to share their opinions on the plan.

It identifies seven areas of focus: safety, environmental sustainability, equity, economic vitality, housing, and innovation. Rather than transportation policies that would benefit the region, the plan presents a strategy that it calls “compact and connected.” It calls for stitching together neighborhoods by investing in infrastructure like protected bike lanes and wider sidewalks while giving preferential consideration to private developments that would bring jobs and housing to neighborhoods lacking in each. Only 75 percent of DART’s existing major transit stops actually have sidewalks within a quarter mile.

“Though many viewpoints provided a diverse set of feedback that informed the process, one key theme emerged: a desire to create a more equitable and sustainable future by providing affordable and safe transportation choices that connect to key destinations,” the plan reads.

It presents transportation as a salve, acknowledging that our car dependence and sprawl have evolved because a vehicle is the only way to conveniently get to certain destinations. It wants an overhaul to the city’s bike strategy, which hasn’t been touched since 2011. It calls for working with DART to establish “last mile” options, an important connection for the new bus routes that will prioritize reliability over coverage. And it reiterates the importance of actually achieving the goal of Vision Zero, which is to eliminate traffic fatalities.

We’ve long used this blog to remind you that Dallas is a city that hates pedestrians, largely because it is designed for vehicles and not people. This plan identifies problems and establishes goals, but it doesn’t have a ton of concrete solutions outside of improvements to staff operations that the city believes will best position it to fix some of these things. (When it talks about “last mile” coverage, it’s hard not to recall how the city face-planted when regulating dockless scooters.)

Head here to read the draft for yourself, then take the city’s survey to let staff know your thoughts.

Instead, it reads like a way to reform how the city does business, analyzing the impact of everything from street design to parking and how getting these things right can make Dallas a more livable city. Some are more ambitious, like concentrating new housing within a quarter mile of high-frequency transit locations and reducing solo vehicle trips by 50 percent by 2040. Others are far simpler: finish building sidewalks within a quarter mile of all transit stops, add sidewalks to neighborhoods that don’t have them, eliminate some parking requirements for new developments.

The city has promised that this plan will not gather dust on a shelf like so many others have over the years. Now it has guidance. It is up to the city to follow it.