Enjoy unlimited access to all of our incredible journalism, in print and digital.
Subscribe Now
Advertisement
Humor

Scenes From the Nancy Best Fountain at Klyde Warren Park

Finally, our city has a fountain that tries to reach the heavens.
By Jonny Auping | December 11, 2020|12:35 pm
Advertisement

It’s not that what’s happening above me isn’t elegant. It’s just a bit dizzying and disorienting, like taking a shower in a Las Vegas hotel and trying to remember whether water is supposed to be a certain temperature. “Baby It’s Cold Outside” plays on speakers nearby, muffled by the water cannon blasts and the subsequent splashes. An empty can of peppermint White Claw floats by near my feet. I fish it out of the fountain and consider the true meaning of Christmas.

I’m at the Nancy Best Fountain in Klyde Warren Park, which is now the home of the world’s largest interactive fountain. The $10 million fountain’s construction was announced back in 2020, right before the holidays, maybe timed as a way to get everyone’s mind off the pandemic. I was far from Dallas then, still sheltered-in-place, craving human contact and the spectacle of something greater than my Netflix fireplace setting.

I wanted to spend my holidays in a city whose fountains try to touch God.

At the table near me is a frazzled aide to Mayor Eric Johnson, who began holding briefings in front of the fountain back in August. Fresh out of law school at UT-Austin, he says he came up here to “make a difference.” Now he’s just trying to keep his padfolio dry. He explains to me that the city just nixed a marketing plan to add a giant “B” and “G” with Poseidon’s trident serving as the “I” near the front of the park. The BIG campaign was successful in other parts of the city, he explains, but something so tacky would never be allowed near the city’s giant water park/fountain/light show.

A small child wearing floaties around his biceps runs by and grabs a manila folder off the aide’s table. I pluck it from the giggling child and return it to the poor sap. The outside of the folder reads “Project Superlative….Phase One: Nancy Best Fountain.” Nancy and Randy Best spent a cool $10 million on the fountain and its “aquatic firework displays.” With any luck, it would be the American version of the Eiffel Tower, proudly shown during television timeouts of college football games played at AT&T Stadium in Arlington.

Bustling toward me is a Highland Park family. The father’s face is paled with sunscreen. He’s carrying a bag of marshmallows and just wants to know, “So is it a pool thing or a Christmas thing?” Their daughter is horrified some of her SMU sorority sisters might be getting a drink at the nearby cafe and see her. The 9-year-old son was promised his pick of food trucks if he behaved at the Nasher Sculpture Center. He didn’t behave, but his mom knows every moment he’s eating ice cream and knocking over giant Jenga towers is a moment she can almost hear herself think.

So far, it looks like the usual suspects you’d expect at a skyscraper-esque holiday-themed water fountain. And then she walks by. I don’t know her name, but we have a history. She was in front of me in line at the $6 popsicle cart. She wasn’t like all the other dames you see in the park. She was sophisticated. Think DMA membership in a waterproof lanyard hanging out of a KERA tote bag. She was gorgeous in the sort of way that makes a guy want to leave a really big book in the Take-A-Book-Leave-A-Book case just to impress her. And now she’s here. I can’t help but think to myself Of all the interactive water fountains inside all of the freeway overpass parks she walks into mine.

I flip a penny into the fountain and wink at her through the soaring water jets between us before getting up to see the spectacle from another angle. Here’s looking at you, kid.

As I pass the “Please Don’t Throw Change In Fountain” sign, I think of Jim Garland, the “Elton John of fountains” and designer of this masterpiece. Someday, I’d love to shake that man’s hand and say, “You, sir, know how to make a really tall fountain.” I’m happy for the people here, whose children will never be impressed by another city’s tasteful but embarrassingly small fountains. 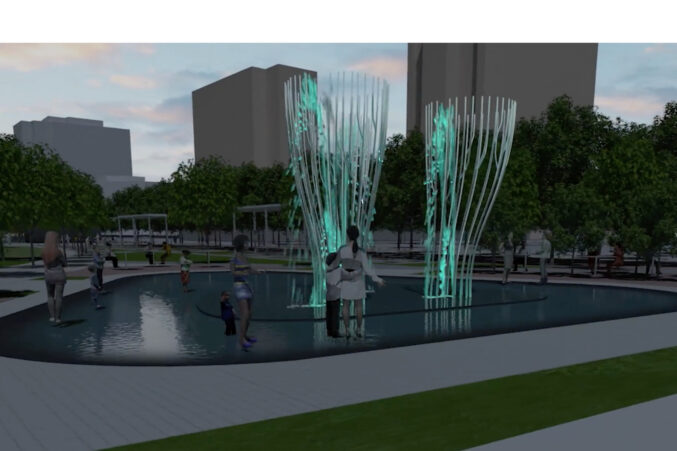 Just before I make it back to my car, a dog runs by me like a gust of wind, followed by a frantic boy calling after it. The dog is heading straight for the most powerful fountain jets, the ones that shoot nearly 100 feet in the air. I put my hand on the boy’s shoulder. “Let him go,” I whisper. “This place is special. He’ll be fine.”

The dog is sprinting through smaller jets, unfazed by their little bursts of water, determined to hop the barricade beyond the fountain’s shiny aesthetic, where the machinations behind the fountain’s true power lie. Suddenly, the dog is intercepted by a city employee who drags him by his collar back to the boy.

“Pets aren’t allowed near the fountain. This isn’t a park park,” he explains. “It’s an interactive citizen experience. You and your dog should get out of here.”

And at that exact moment the fountain blasts higher than it ever has and the jets dance colorfully to “Rockin’ Around the Christmas Tree.” And people everywhere clap because they don’t know what else to do. The dog cowers in fear. I gently tap the boy, signaling to him to clap, so as not to anger the great fountain. And as the show starts to die down, the boy says what did not need to be said.

We'll have a story a day until we run out.
By Zac Crain
Parks

An Unfair, Unhelpful Review of the New Nancy Best Fountain

The 5.7-acre park will be owned by the City of Frisco and operated by Communities Foundation of Texas.
By Christine Perez
D Magazine Directories