Over the past few weeks, Dallas Mayor Eric Johnson has repeatedly complained that the city’s search for a new police chief has been less than transparent. During a recent local radio appearance, he said he wishes the City Council’s Public Safety Committee could handle the hiring process. In a newsletter emailed last week, Johnson said he was concerned about the qualifications in the job description and wondered why Dallas couldn’t hold a public form with the candidates in the midst of a pandemic. In Tuesday’s state of the city address, Johnson spoke about his desire to continue to push for more public involvement in the police chief selection process.

But has the public really been shut out of the hiring process? Late Tuesday night, not long after Johnson finished delivering his speech in the Hall of State in Fair Park, City Manager T.C. Broadnax sent a memo to the mayor and the Council that laid out how the final stages of the hiring process will unfold over the next few weeks. This morning, the city manager announced the seven finalist candidates.

The search began in October, when the city put the selection process in the hands of Gary Peterson, a recruitment consultant who has led police chief searches in cities like Nashville, Seattle, and San Francisco. Peterson first met with the mayor and the Council and used that feedback to craft a candidate profile and job description. The City Council Public Safety Committee received monthly briefings as the search unfolded, and in November the city conducted a community survey to seek public feedback on the qualifications sought in the next chief. More than 4,500 people responded.

The city manager’s memo states that 36 people applied for the position, and he hopes to make a hire by January 1. Per the city charter, the city manager has sole authority to hire the next chief. However, Broadnax says the next few weeks of interviews will be collaborative and will include feedback from the mayor and Council. Dozens of stakeholder groups are expected to meet with the finalists.

In many ways, the process mirrors the approach Broadnax took when hiring outgoing Chief U. Reneé Hall, with one key exception. Because of the COVID-19 pandemic, much of the process has shifted online. Gone are the informal meet and greets hosted by business associations at downtown hotels where council members could hobnob with candidates. Gone are the community meetings at City Hall, where residents were encouraged to visit with the finalists. Those events will be replaced by the video conferences that have become a ubiquitous part of pandemic life.

If anything, that shift online has made the process even more transparent, says Councilwoman Jennifer Staubach Gates, chair of the council’s Public Safety Committee. For one, the interviews will be video recorded and made public. Gates says she has had multiple conversations with Broadnax and Assistant City Manager Jon Fortune about how to increase the Council’s involvement in the process. With this hire, instead of mingling at a Citizens Council mixer, council members may submit questions to the police chief candidates, who will record their answers in videos that will also be made public.

“I think the response to the survey is indicative that people are engaged,” Gates says. “We all had the opportunity to have input into the job description before it was published. It has not been an overnight process.”

Candidates will also participate in stakeholder panels consisting of representatives of dozens of community groups and organizations, ranging from activist organizations like Next Generation Action Network and Mothers Against Police Brutality to the police unions. Those conversations will also be taped and made public. Councilman Lee Kleinman, the term-limited vice chair of the Public Safety Committee, says the process is every bit as transparent as any he has participated in for hiring a top official at City Hall.

“If the mayor was concerned about the process, it may be in his best interest to pick up the phone and call Chairwoman Gates or the city manager,” Kleinman says. 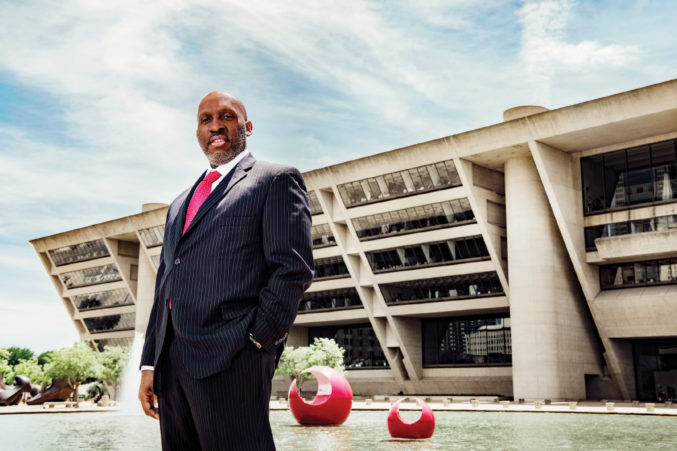 When reached by text, the mayor’s spokesman did not comment on Johnson’s specific concerns with the hiring process nor whether he discussed these with Broadnax or Gates. But many of Johnson’s public complaints about the police chief search were echoed by Dallas Police Association president Michael Mata, who believes the process has been too rushed. He lamented the inability to meet with the candidates in person in a public setting.

“I don’t understand how you are doing an exhaustive national search in 60 days,” Mata says. “Fort Worth, Grand Prairie, Houston; I guarantee it wasn’t 60 days.”

Fort Worth’s police chief announced his retirement in late July, and the city is poised to choose a successor by the end of the year. Chief Hall resigned her office in early September, and Broadnax wants a replacement by the beginning of next year, which means Dallas’ hiring process is around 30 days shorter.

Mata also took issue with the job description prepared by the manager and Council, which he says lowers the requisite qualifications for the job to five years of administrative experience and stating a master’s degree is “highly desirable,” but not required. That combination of the timeline and the curtailed qualifications, Mata says, suggests to him that the city manager already has a favored candidate.

“I don’t think the associations are really going to have a whole lot of say in this,” Mata says. “If we are making this decision in less than 30 days, that has to tell me that they already have a very short list of who they are deciding on. Why are you lowering the standards unless someone you have in mind has those standards? That’s where the rank and file have distrust from the beginning.”

Other stakeholders who have been invited to participate in the vetting of the next chief are similarly suspicious of the process, but not because they don’t believe they will have meaningful interactions with the candidates. John Fullinwider, an activist and co-founder of Mothers Against Police Brutality, believes that large cities today all tend to lean toward a certain kind of reform-minded candidate, but even the most progressive chief will run up against more systemic policing problems.

“They are all reform candidates. Most are going to look like Obama’s 21st Century Policing Task Force,” Fullinwider says, referencing the former president’s policing platform. “But you have to ask yourself, why are these reforms no match for the deep current of racism and brutality that runs through these departments? It is not that the reforms aren’t good on their face, but they are no match for the dysfunction, violence, and racism inside the departments.”

Fullinwider believes that real conflict at play in the hiring process isn’t the political squabbles over who gets to choose the next chief, but broader community divisions over conceptions of what constitutes just and equitable public safety, as well as internal divisions within the police department.

“If, down through the years, the most heavily policed neighborhoods remain the highest crime neighborhoods, then something is broken,” Fullinwider says. “If some communities feel so safe they build a wall around their community and even hire off-duty police to patrol, the model is pretty broken.”

Fullinwider’s observations about the divergent perceptions of policing in Dallas are borne out by the results of the community survey Broadnax included in his memo to the mayor and the Council on Tuesday. According to the survey, Dallas residents want a chief with a track record of reducing crime and retaining quality officers, but they also want a chief who can strengthen community partnerships and who understands the history of policing and racism in the United States.

Another survey question found that residents want to increase DPD mental health, de-escalation, and racial bias training; hold police officers more accountable for their actions; and facilitate a culture change within the department. They also want more police on the streets and a chief who will stand up for his or her officers.

When asked about priorities, the two most popular answers were reducing violent crime and holding officers accountable. Only 49 percent of respondents said they completely trusted or had a high level of trust in police. The survey reflects attitudes around policing that could be described as schizophrenic. It suggests that what is lacking in the hiring process is not public input, but a clear public directive.

What the public wants is a police force that is responsive and effective, but one that doesn’t escalate violence or terrorize vulnerable communities. It wants a force that has the tools it needs to do its job, but not one that uses those tools against the people it is sworn to protect. They want a force that can reduce violent crime and hold its own violent cops accountable.

These kinds of contradictory mission statements help explain how the City Council could, on the one hand, help draft a job description for the new chief that seeks an individual with “cultural awareness and sensitivity including an understanding of divisive tactics that separate the department from the community and residents, and the history of policing in America.” But then, at yesterday’s Council meeting, that same elected body voted by a margin of 13-2 to approve $7 million in new weaponry for the police, including tear gas that has been banned by international treaty and high-powered rifles used to deploy so-called “less-lethal” rounds of ammunition against peaceful protesters who took to the streets demanding police reform this past summer.

These are cultural and philosophical challenges facing the city and the Dallas Police Department that appear too large, complicated, and entrenched to expect a single police chief to fix. After all, Dallas has now had a string of reform-minded chiefs who haven’t been able to change the status quo. That’s because, regardless of their ability to meet the city’s desired qualifications, Dallas’ police chiefs are almost set up to fail.

Perhaps Mayor Johnson understands this. And should the next chief — no matter who gets the job — fail, Johnson will be there to quote from the city charter, lecture the public on the legislative process, and remind us that, in the end, it was always the city manager’s choice. Then he can wash his political image of the whole thing.

UPDATE: After the publication of this article, the mayor’s spokesperson shared a letter Johnson sent to Chairwoman Gates at 8:29 p.m. last night that outlines some of his concerns about the hiring process. You can read it here.