Southern Dallas developer Sherman Roberts has been federally indicted for attempting to bribe two former city council members over a five-year period in return for votes that landed a low-income housing development nearly $2 million in loans and grants.

The indictment was unsealed Wednesday. It does not name the council members, but one appears to be the late Carolyn Davis, who was chair of the city’s Housing Committee at the time of one of the alleged bribes. She was killed in July 2019 by a drunken driver after pleading guilty to accepting bribes from another developer.

The other alleged bribe recipient appears to be former District 4 Councilman Dwaine Caraway, who is serving a 56-month sentence for accepting bribes for his vote on another contract. His attorney, Michael Payma, said he had not seen Roberts’ indictment and was “not in a position to comment.” But the indictment quotes Davis speaking to a Council Member B, referencing a project “in your district.” That district in 2018 would have been District 4, which was Caraway’s.

Both counts say Roberts either transferred or conspired to transfer at least $5,000 worth of money or items to the two council members. His project received more than $1.6 million in city loans and grants for an apartment development in southern Dallas, partly as a result of Davis’ vote. The city of Dallas received $10,000 or more in federal funding each year from 2013 to 2018 as a result of the scheme, it alleges.

Roberts is also accused of agreeing to make monthly payments of $2,000, a lump sum payment of $60,000, and $600 cash in return for Caraway to steer the mixed-use development Patriot’s Crossing into Roberts’ control. It doesn’t appear he actually paid anything there beyond $600 in cash. Caraway pleaded guilty in the other case two days after allegedly agreeing to the scheme.

Roberts was an outspoken critic of the city’s first housing policy, which was passed in 2018 in part to help steer city, state, and federal dollars into low-income housing in different neighborhoods across town. Dallas historically concentrated such housing in southern Dallas, shoveling public dollars into neighborhoods that lacked opportunity and services.

Roberts also served as chairman of the board of a little-known city housing agency known as the Dallas Housing Finance Corporation. That year, the Dallas Morning News found that the board steered a $14,000 contract to Roberts’ City Wide Community Development Corporation. While that relationship was legal under city code, the News’ investigation triggered reforms that blocked board members from receiving contracts selected by their board.

The indictment says the criminal arrangement began five years before all that, in February 2013. Roberts agreed to pay Davis, who is identified as Council Member A, in return for her votes. She would go on to support his projects receiving federal housing tax credits as well as loans and grants from the city of Dallas. (While the indictment does not name her, it does include direct quotes in which “Council Member A” references being the housing committee chair at the time of the votes, which Davis was.)

That project was Serenity Place Apartments, a 45-unit complex located at the corner of Kiest Road and Lancaster Boulevard, in southern Dallas. On February 27, 2013, the city voted to approve the project as its selection for federal 9-percent low-income housing tax credits, known as LIHTC. Those federal credits are awarded by the state; cities apply on behalf of projects that would produce more low-income housing. Those projects then compete against one another for the credits.

In May of that year, the Texas Department of Housing and Community Affairs terminated the application. The indictment says that Davis wrote a letter in her “official capacity” to the agency’s executive director advocating for the project to get the housing credits.

The next February, the indictment says, Davis pressured other developers to withdraw their own applications for the tax credits and again advocated for Roberts’ project. Her housing committee motioned to approve, and it passed the full Council the next week. During that meeting, the indictment says, Davis also voted to award the project a $1 million loan, a $959,913 construction grant, and a $38,000 predevelopment grant.

“Council Member A knew that the vote would benefit Roberts financially and that Roberts needed the vote for his project,” the indictment reads. By April 2015, the indictment says, Roberts told Davis that “right now you and me are making money.”

The indictment says Roberts received $1.6 million from the city for Serenity Place from September 2014 to January 2016, in part because of Davis’ votes.

Davis also began asking for cash; “just a few dollars,” she would say. In May 2015, Roberts began bidding on the Patriots Crossing project. The indictment says Davis replied, “I am your mouthpiece.” She told Roberts that she would get a copy of the request for proposals to help tailor it to give Roberts a better chance at winning it.

Patriot’s Crossing was a real estate development across from the VA Hospital on Lancaster. In 2014, another developer secured $4.5 million in tax credits from the city to develop the land but blew the deal, leaving the project in limbo. He overpaid for the land and didn’t have VA approval for the project. The city, meanwhile, was out its $4.5 million. 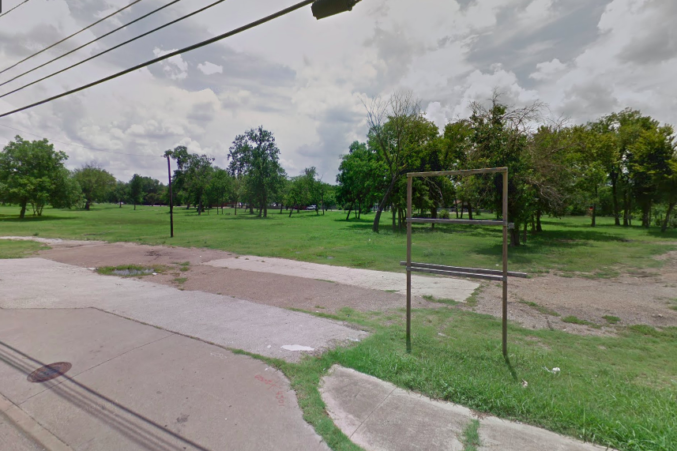 The city sunk $4.5 million into acquiring this land, which developer Yigal Lelah promised to build a mixed use development. Nothing got built. This is what it looked like in July 2017.

The city issued an RFP to search for developers to take over the project. Roberts wanted in, but city staff balked; he was proposing more low-income housing in an area already saturated with it.

Soon after, staff delayed the Patriot’s Crossing project for three years because of how it went the first time. When it came back around, it was 2018, and Davis had been term-limited from Council. It is here that D believes Caraway enters the indictment, identified only as Council Member B.

Caraway told Davis and Roberts that the city was drafting a new RFP for the development. “You can stop that … you going to have to tell them look I don’t want an RFP in my district … you can stop an RFP,” Davis replied. “The difference is I had control of Housing. When I was the chair … I would force Housing to let that property go into his development and he would start the project.”

Roberts told Caraway that he would make $850,000 off the residential alone, according to the indictment. It would take years to earn that money, though.

“Once you’re successful with this project, don’t forget about me and Council Member A,” the indictment quotes Caraway as saying.

“I won’t forget about you,” Roberts replied. “That’s where the money is.”

On August 7, Roberts and Caraway agreed to the arrangement: a $600 cash payment in exchange for stopping the RFP. Then a $2,000 monthly stipend and a $60,000 payment after he refinanced another project. But then, on August 9, Caraway pleaded guilty to accepting about half a million dollars in bribes for his support of a contract that paid for cameras on school busses.

Davis pleaded guilty in March 2019 for accepting $40,000 in bribes from another low-income housing developer.

Roberts could not be reached for comment. A phone call to his company went unanswered, his cell phone is off, and an attorney is not listed. The full indictment is below.