City Manager T.C. Broadnax announced today that he has chosen Eddie Garcia to be the 30th chief of the Dallas Police Department. Garcia has been the chief of the San Jose Police Department since 2016, and he will become the first Latino to lead Dallas’ police force. Garcia’s tenure in San Jose was marked by his efforts to improve the department’s relationship with the Spanish-speaking community by adding basic Spanish to the police academy curriculum, launching a Spanish language Facebook page, and increasing minority recruiting. In a release, Garcia mentions how he only spoke Spanish when he moved to San Jose as a child and eventually grew up to become that city’s top cop.

“My story began as a young boy moving to a new city, learning to speak English in a community that promoted me to Chief,” Garcia said. “It’s an honor to be welcomed into one of America’s greatest cities for the second time as Chief. I’m truly humbled by the thought of wearing the DPD uniform and working alongside such an amazing group of committed men and women. Together in partnership and collaboration with the Dallas community, we will meet the challenges of today and beyond.”

Garcia was one of seven finalists for the job of replacing outgoing Dallas Police Chief U. Reneé Hall, who announced her resignation in September. After last week’s public interviews, Garcia was one of two candidates — along with Dallas Police Deputy Malik Aziz — who most impressed some city council members. He joined the San Jose Police Department in 1992, and served in numerous positions over the years, including as a patrol sergeant, night detective, homicide investigator, and commander of the Community Services Division and the Special Investigations Unit. The city’s release also cites Garcia’s efforts as police chief to lead initiatives to help “build community trust; increase transparency; and embrace fair, impartial, and constitutional policing.”

“Despite the challenges of the global pandemic, it’s an exciting time for him to come to Dallas and continue building on the foundation of R.E.A.L. Change we’ve built,” Broadnax says in the release. “Advancing 21st Century policing in ways that are responsible, equitable, actionable, and legitimate.”

Garcia will officially take over as Dallas chief on February 3, 2021. 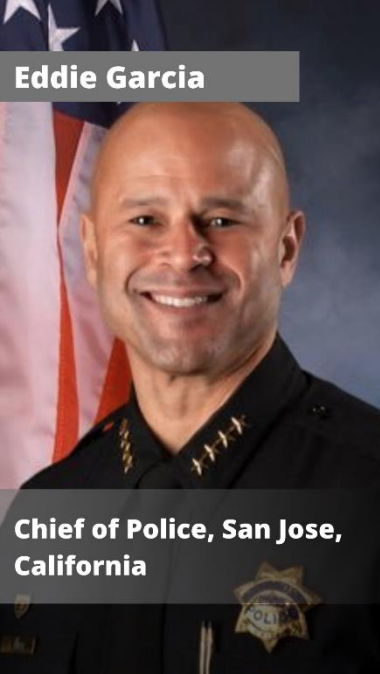 Eddie Garcia, the former chief in San Jose, will be the Dallas Police Department’s new top cop in February.
City of Dallas

Moments after the city issued its release announcing Garcia’s hire, Dallas Mayor Eric Johnson issued a statement, saying he already spoke with Garcia to congratulate him on becoming the city’s first Hispanic police chief. The mayor cited the challenges facing Garcia in combating Dallas’ rising crime as well as restoring trust between the police force and communities of color.

“Law enforcement alone cannot solve the challenges we face, but the hardworking men and women of the Dallas Police Department are integral to combating violence, which disproportionately affects people of color in our city,” the mayor wrote. “As policymakers, we must give Chief Garcia the tools that his officers need to keep people safe and continue to push for solutions — such as the programs recommended by the Mayor’s Task Force on Safe Communities — that can prevent crime without placing additional burdens on the police department. The people of Dallas deserve a city government that puts public safety first.”

Garcia will have his work cut out for him. In addition to the increases in violent crime, he will have to navigate contentious politics around the horseshoe while responding to his direct boss, the city manager. This year, thousands of Dallas residents sustained weeks of protests in the wake of George Floyd’s killing, calling for reform to policing. And the police department continues to suffer low morale and struggles with attrition. Garcia’s predecessor failed to win over her department, and yet, Broadnax has again chosen an outsider to lead the Dallas Police Department.

Aziz, who has twice been a finalist for chief and was demoted by Hall after she beat him out for job in 2017, posted a quote from Muhammad Ali on Twitter as the news of the hire was released.