Enjoy unlimited access to all of our incredible journalism, in print and digital.
Subscribe Now
Advertisement
Parks

A Better Look at That New Klyde Warren Park Fountain

Last week, when it was announced that Nancy and Randy Best had donated $10 million toward the erection of a new “super fountain” in Klyde Warren Park, our own Zac Crain ridiculed the idea. Seeing the rendering of the fountain that was released at the time, I agreed with Zac. It looked terrifyingly out of scale. The brilliance of Klyde Warren is that it brings people together in a comfortable human-sized setting in downtown Dallas, a place that has for so long been hostile to humans. This thing, it appeared the opposite of that. Then the Morning News wrote an editorial that must have made its architecture critic, Mark Lamster, cringe. [Update 1:35 p.m.: 15 minutes after this post went up, Lamster published his thoughts on the fountain, though he hadn’t yet seen the images we are publishing here.] In part:

Yes, this project is flashy, splashy and over-the-top. A “super fountain” that will shoot water 95 feet high choreographed to music and colored lights could become the most Dallas thing in Dallas. Like big hair and 10-gallon Stetsons, it makes a statement. Supporters say it’s destined to become Dallas’ “blimp shot” — an iconic feature of the skyline.

But we’re not afraid of big, bold statements. In fact, we encourage them. The donors and developers in our city who can afford to spray out $10 million didn’t get where they are without making bold moves. Dallas is a city of big hats, big ambitions, big money, and now big fountains. We say bring on the dazzle.

We say bring on the outdated clichés and the pitchforks to rend our flesh! Yippee!

Ugh. That editorial reads like it was written in 1960. Every point it raised in support of the fountain was actually an argument against it. So, yeah, I was with Zac.

But some new imagery of the fountain has surfaced, and it has led me to reconsider the project. As I do on so many other fronts, I now find myself locked in mortal combat over this issue with Zac Crain.

Have a look at this new animation of KWP 2.0. Ignore the images of the new Pavilion on the west end of the park. We’ll have to return to that. Skip forward to the 2:54 mark of the video. This is a much different fountain than the one we were shown on announcement day. And KWP’s president, Kit Sawers, tells me that they plan to operate the fountain in a sensitive fashion. It’s not like it will be shooting water 95 feet into the air all day long.

“During the daytime, it will not shoot to full capacity, but just serve as a beautiful and graceful part of the neighborhood,” Sawers wrote in an email. “We hope to have a nightly ‘performance’ of sorts, possibly on the hour, for a few showings, and then do something special for holidays and other celebrations. …

“What I love about KWP’s fountains is that they are one of the great democratizers of play in our city. Dallas children who are fortunate enough to play anywhere in the country love them, and Dallas children who don’t have access to such luxuries in their own neighborhoods love them. Those children play in our fountains WITH each other, and their parents/caretakers talk TO each other. Where else in our city does that happen?”

This fountain will be finished in a year’s time. Renderings are a mutable substitute for the real thing. We’ll see how it all comes out in real life. For now, though, I think there’s reason to be optimistic. Two more images for your eyeballs: 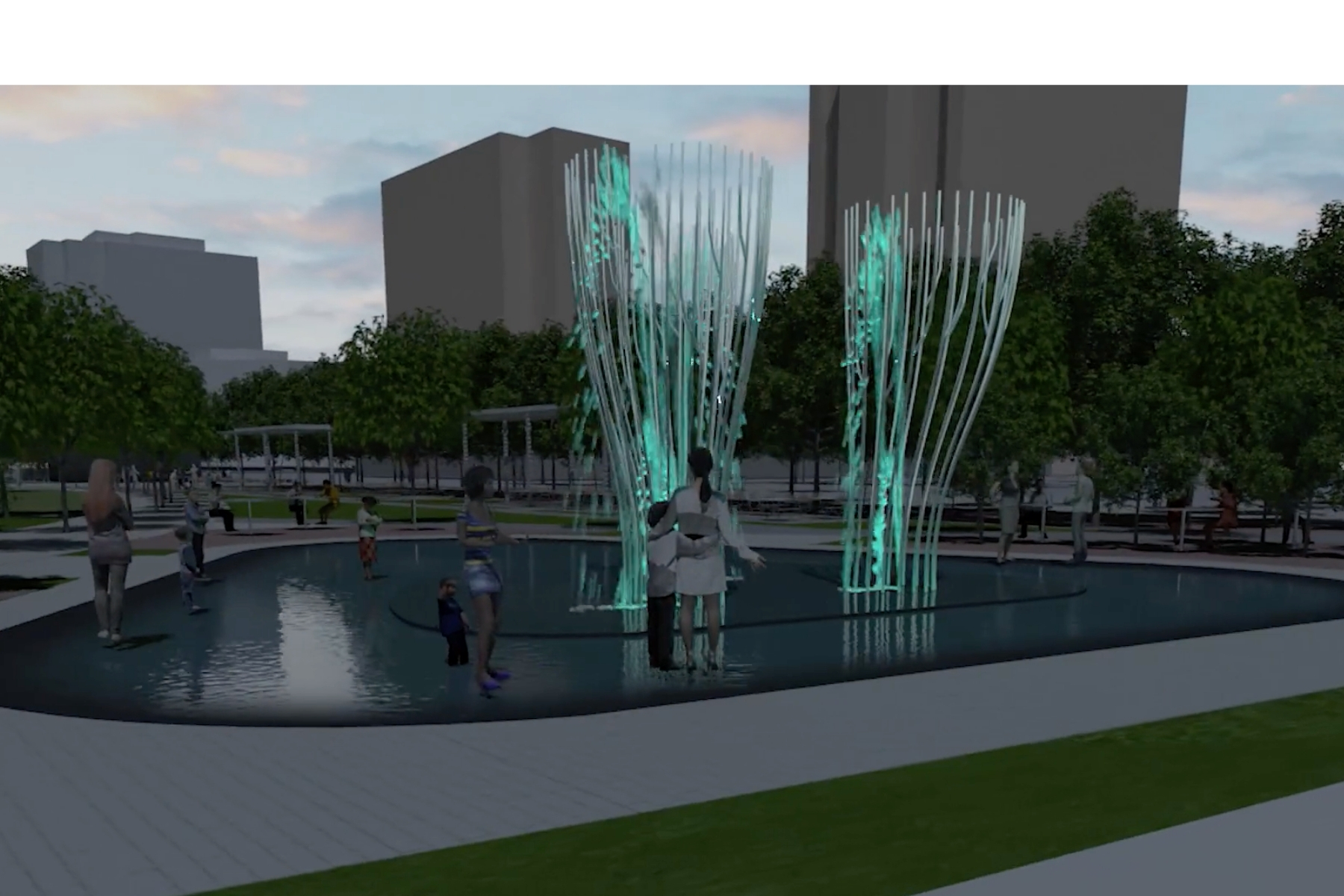 The doyenne of Klyde Warren Park is more about beauty than safety.
By Tim Rogers
Parks

Mi Cocina On The Park, when it opens this fall, will have special (that is, public park legal) Mambo Taxi–like frozen "margaritas" sans tequila.
By Rosin Saez
D Magazine Directories