Next Thursday the Dallas school board will consider scaling back its learning goals for kids, supposedly as a response to the damage done by the pandemic. But whose damage are we worried about here? The kids? Or the adults?

The damage to the kids is real and terrible. Earlier this month the school board sat through a devastating briefing on what the pandemic has done to student achievement. But later, new board member Joe Carreon told me he is skeptical that lower achievement goals are the remedy. He says the worst part of the briefing is that the briefing probably wasn’t devastating enough.

Carreon, who replaced Miguel Solis in District 8 in West and East Dallas, thinks as many as 25 to 33 percent of students in his district may not even be enrolled at all in school now. That means their achievement levels didn’t even show up in the numbers presented at the briefing.

He tells the story of spotting some kids recently playing soccer in the middle of the day near where he gets coffee. He wanders over and asks them why they aren’t in school.

The students who are in school, who have enrolled and who do attend either online or virtual instruction, are the ones who did so terribly in the numbers the board saw at its briefing. We have to assume the kids who aren’t even in school at all have been hit even harder.

The unmistakable pattern is that students suffering the worst learning losses during the pandemic have been Black and Hispanic. Historically at the bottom of the achievement scale, minority students had been making dramatic catch-up gains before the pandemic tore everything to bits.

Since the imposition of the Mike Miles school reforms five years ago, DISD has been treating bad test scores and school assessments as fire alarms, sending in beefed up teaching teams and extra resources where the extra effort can do the most good. The reforms were working so well that Dallas became a model for school reform statewide. 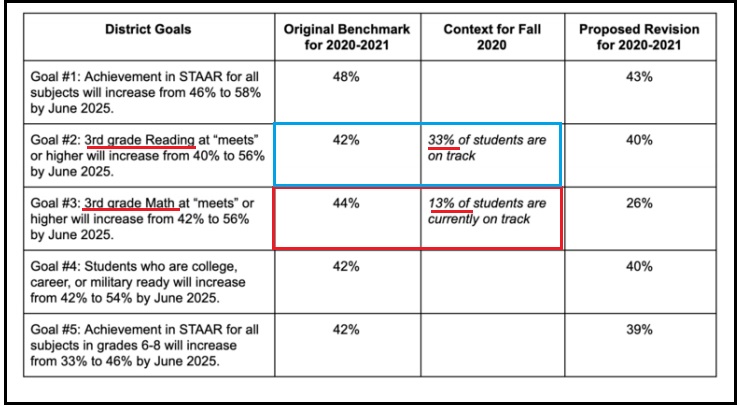 Third graders this year are disastrously behind the Dallas school district’s rather modest goals for them.
Dallas Independent School District

So what’s the solution? The board will be asked by staff next week to reduce the third grade math competency goal to 26 percent. That would put the year’s achievement level at 60 percent of the original goal.

Well, there you have it. Sixty percent is way better than 30 percent. In fact — check me on this, because I’m a bit math challenged myself — I think 60 is actually twice 30. So, wow. All the board has to do is enact this new goal, and the district is already doing twice as well. Wait. Would it be half as bad? Whatever. Way better.

So if the board enacts these changes, how many more Black and Hispanic third graders will be able to do math? Ah … I’m doing the math on that as we speak, got my pencil sharp, wetting it on my tongue again, let’s see. That would be … zero. Changing the goals will not teach one more child to do math. But it won’t look half as bad for the adults running the district.

Believe it or not, this is a debate we have been knocking heads over in Texas for 20 years. Serious thoughtful people, many of whom are my fellow liberals, have argued passionately that bad test grades for minority kids and bad state assessments for minority schools amount to a form of racism.

Only a few weeks ago, Dave Lieber, a staff columnist at the Dallas Morning News, wrote that he recently attended a company-sponsored class on bias. Now, he says, “I’m trying to view our world through a different lens, trying not accept things as they are just because they’ve always been that way.”

His most important insight, he says, is that poor statewide assessments for minority schools are a racist echo of 1930s real estate red lining, when the federal government refused to back mortgage loans in majority Black and Latino neighborhoods. “Through my new lens,” Lieber wrote, “I see that it’s one more significant way to hold communities back. When the state gives a school an F or a D grade, that’s telling everyone that particular school is failing or near failing. But the message is also that the surrounding neighborhood is a failure, too.”

The counterargument, which interestingly enough tends to come from the more conservative side of the dial, echoes a speech made by then Texas Gov. George W. Bush to the 91st annual NAACP convention in Baltimore, in 2000. Bush told the NAACP that the real racism we need to worry about is in softening the grades and the goals for minority kids and schools.

Half of DISD students have lost momentum during the pandemic.
Dallas Independent School District

Referencing Phyllis Hunter, one of a handful of brilliant young education crusaders who were working for him at the time in Austin, Bush said, “And I will confront another form of bias: the soft bigotry of low expectations. My friend Phyllis Hunter of Houston, Texas, calls reading the new civil right.

“Equality in our country will remain a distant dream until every child, of every background, learns so that he or she may strive and rise in this world. No child in America should be segregated by low expectations, imprisoned by illiteracy, abandoned to frustration and the darkness of self-doubt.”

It’s not simple. I spoke with DISD board chairman Justin Henry about it this week. Henry says he sees the importance of maintaining original benchmarks where they are so that we can see clearly how far below them we have fallen and how serious is the emergency. But he says it doesn’t help motivate people to give them goals that everybody knows they can’t achieve. He’s probably going to suggest a compromise to keep the original goals in view but append some kind of asterisk to explain why actual performance is so bad this year.

That all makes sense. A larger danger, however, looms over the whole conversation. Teacher unions here and nationally have been using the pandemic as leverage to attack merit pay systems and overall “summative” teacher evaluations. Some states already have dropped student test scores entirely from teacher evaluations, supposedly as a response to the pandemic.

The proposal before the Dallas school board next week is a great example of how that all works out in real life. Soften the standards; the adults will look better or not as bad; the kids won’t learn a damn thing more; Black and Brown kids will take the worst hit. Now, 20 years after Bush spoke, that kind of bigotry doesn’t even seem all that soft anymore, does it?