The city of Dallas didn’t let the pandemic get in the way of its spending. For the last fiscal year, of which COVID-19 infected the community for six months, sales tax receipts reported to the city of Dallas were only down less than a percentage point from the prior year. In all, Dallas brought in just $2.7 million less than it did in 2018-2019, an encouraging sign for the economy, if not for public health. That loss amounted to .9 percent.

“The governor began reopening in May and that really changed the course of the trajectory of sales tax forecast,” says Elizabeth Reich, the chief financial officer for the city of Dallas. “Clearly people had emerged from shelter in place and were back shopping and sustaining the economy. So aside from the safety issues—we still want people to be very, very safe and there is concern now with community spread that we all need to do more on that front—from a fiscal standpoint, the additional spending has been very helpful.”

The fiscal year runs from October through September. A major drop in sales tax revenue would require a reduction in city services, Reich says. Property taxes basically pay for public safety; sales tax revenue covers most everything else, including homeless services and libraries and parks. In 2019, the city brought in a little over $313 million. That number for 2020 was just shy of $311 million.

In May, the Urban Institute and Brookings Institution’s Tax Policy Center reported that states had lost $6 billion in sales tax receipts compared to May 2019. Texas was down 15 percent year-over-year. That month, Dallas dropped 12 percent, but then began improving. Reich says there is evidence that the suburbs have benefited from workers staying home, which Dallas loses out on. She expects that trend to continue as the pandemic forces companies to keep their offices closed.

The back half of the year was buoyed by the first four months. Dallas brought in about $11 million more year-over-year from October through January. That was about a 10 percent increase. February barely topped its prior year, adding just $376,799 in receipts when the previous three months each saw year-over-year increases of between $2 million and $3 million. March suddenly plunged 9.4 percent, down about $2.8 million compared to March in 2019. The bottom fell out in April; the city of Dallas lost about $6.3 million, a drop of 24 percent. 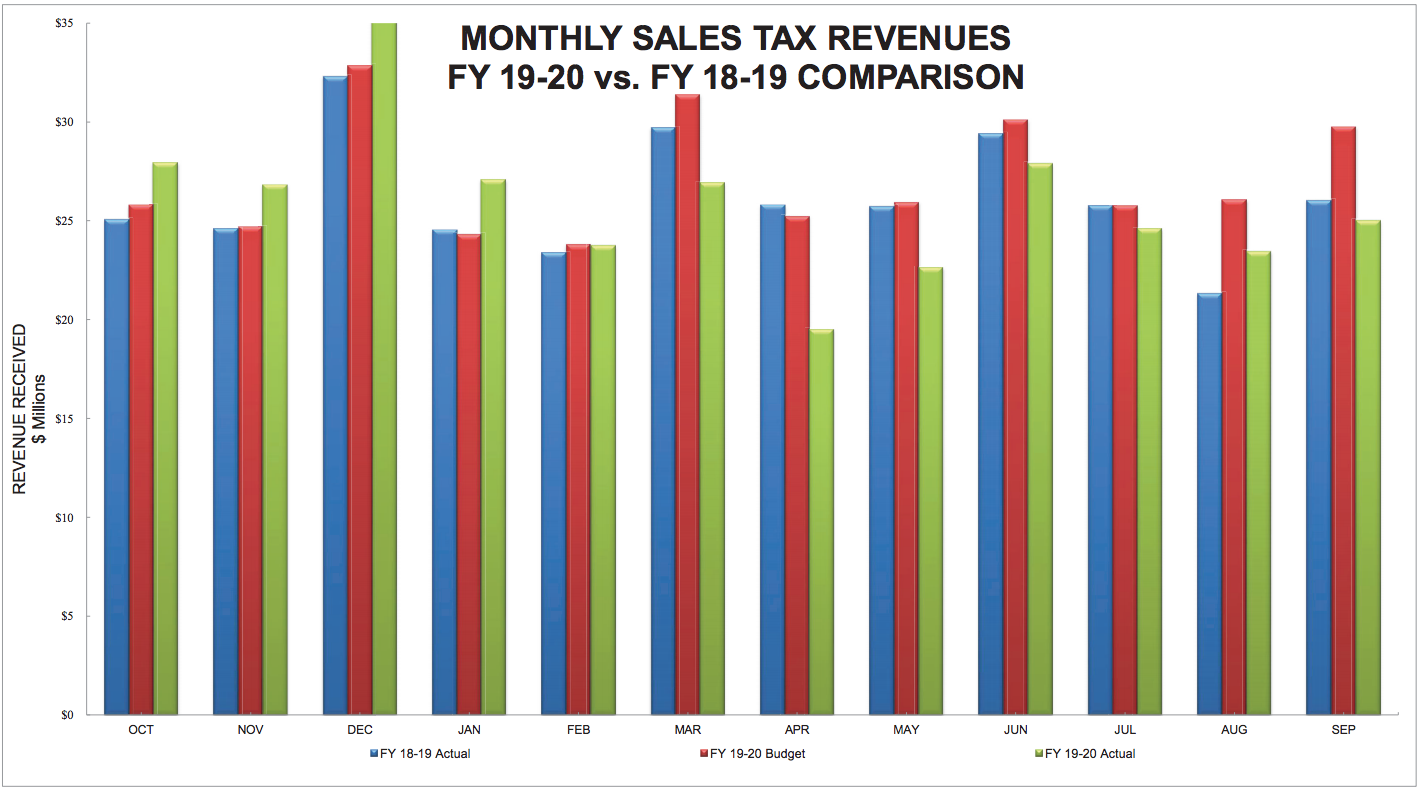 In May, the economy began reopening. Year-over-year losses were reduced by half: the city was down 12 percent in May, then 5 percent in June followed by 4.6 percent in July. August surged forward, actually adding about 10 percent more than August of 2019. The city had anticipated a loss of $14 million from what was budgeted, which wound up being nearly exactly right. But in looking at the actuals, the difference was only a loss of $2.7 million year-over-year.

September also would have been an improvement year-over-year, but an accidental overpayment from the state comptroller required the city to pay back $3.4 million in sales tax receipts. Reich decided to fully reimburse the state in September, which prevented a payment plan that would’ve reduced sales tax revenue over the next 25 months. In a memo to the City Council, she wrote “this is important given current economic conditions.”

“We don’t want to make cuts in services to the residents at a time when they’re most vulnerable and most need those services,” Reich says. “In terms of a fiscal stimulus, if local government needed to reduce its services and staff, that exacerbates any recession. It does not assist in recovery.”

Here is the problem: Reich fears commercial property taxes will take a nosedive in the next two years as they begin to be reappraised. A month ago, the Dallas Business Journal reported that North Texas had 9 million square feet of office space available for sublease, about half of which is vacant. About 5.7 million square feet has been made available since January. Sublease volume is up by almost 50 percent. That tells Reich a lot of those companies will argue for a lower tax rate.

Commercial property tax revenue accounts for about 45 percent the city’s entire property tax income, which equaled about half a billion dollars in 2019. She is worried about retail and commercial properties far more than residential, which is riding high on low interest rates, surging demand, and a dwindling supply.

Plus, the city got help during the pandemic. Federal CARES funding paid for personnel whose jobs suddenly required anything related to coronavirus response. It’s not clear what federal help will look like going forward.

Then there is the matter of the pandemic itself. As I reported earlier this week, new infections have increased by 63 percent over the last three weeks. New cases this week have been even higher, reaching a pandemic peak of 1,831 on Monday. Hospitalizations in Dallas County are up 163 percent from their low in September.

In opening the economy, Gov. Greg Abbott said we will need to learn to “coexist” with the virus. It appears his strategy has at least worked in motivating consumer spending in the city of Dallas—but the true cost, the human cost, has yet to be fully seen.