This is a story about the apple not falling far from the tree, and it’s a good thing. Good tree, good apple.

Now Moreno’s son, Jesse Moreno Jr., who was a member of the Dallas Park Board up until two months ago, has spearheaded an equally successful campaign to rescue one of the city’s most historic parks, Reverchon, a mile north of downtown.

The two efforts might look very different at first. Randall was threatened by neglect. Reverchon was threatened by money — a scheme to turn it into a commercial entertainment center. But in both instances, the public faced losing the same thing — access to a place intended to be solace and beauty for the public, meaning everybody.

When Jesse Senior was fighting for Randall Park, my kid was at Woodrow with “Young Jesse,” as he will always be known in East Dallas. He’s 35. I remember his father then as a relentless bundle of energy and good cheer who never got mad, never stopped, and never took no for an answer.

Jesse Senior is, in his son’s word, a baseball “fanatic.” He played at North Dallas High School and went on to be a founder of the Dallas Mexican American Baseball League, which still exists. But to Jesse Senior’s great frustration, Young Jesse didn’t like baseball.

The father did not give in easily. “My dad tried to force baseball on me by tying a glove on my left hand in order for me to become a leftie,” Young Jesse recalls. “That didn’t work.” He laughs about it now, which is a good sign. (I have been informed that lefties wear their gloves on the right hand, so that tells you how much Moreno and I know about baseball.)

All Young Jesse wanted to play was soccer. Randall Park across the street from Woodrow, the soccer team’s main practice field, was littered with drug needles and broken glass. When the weather got hot and dry, the dirt cracked open deep enough to break a kid’s ankle.

So Jesse Senior made one of those decisions fathers sometimes must make. If his son was going to insist on soccer, at least Jesse Senior would see to it that the kid had a safe field to practice on.

“My dad and other parents saw that there were substantial differences between Randall Park and fields up north,” Young Jesse says. “My parents put pressure on the Park Department and asked them, ‘Why do we have lush green fields up in North Dallas, yet in East Dallas we have dirt patches?’ He was told, ‘Well, it’s drought.’ And so my dad would push back and say, ‘So you’re telling me the rain clouds discriminate between North Dallas and East Dallas?’

He certainly did. I remember that about him. He was a genial, charming pusher, but he was a pusher. He pushed for support from the school and support from powerful alumni, but the thing he pushed hardest for was support from surrounding neighborhoods, where, interestingly, he may have met his hardest sell.

Those neighborhoods are still predominantly Hispanic but now are more deep-rooted and secure than they were 20 years ago. Back then the area was inhabited by more recent immigrants striving to endure in a new and very foreign place. They were not always sure that words like “public” and “park” applied to them.

Jesse Senior walked long, hot blocks and knocked on reluctant doors along Santa Fe Avenue, Martinique, Mount Auburn, and Eastside, all over the area carrying word of his park project but also bearing something larger: the concept that Randall Park was public and that they were the public for whom it was intended. The end product was a park beautifully restored under a joint partnership between the city and the school district.

So we fast forward the better part of two decades. It’s 2019. The father is mostly retired, battling some health setbacks. His son, an equally strong but more restrained personality, is running the family restaurant business and is a member of the Dallas Park Board. And here comes a plan with all of the Dallas 50-families insider hoopla and fanfare attached, trumpeted by the Dallas Morning News, of course. The idea is to basically give away the heart and center of Reverchon Park in Moreno’s park board district to a commercial for-profit sports and entertainment group.

The proposal to turn Reverchon into a commercial enterprise was delivered to the Park Board with all kinds of glossy expensively printed promotional material, but, as far as the public process was concerned, it showed up more or less out of the blue. That usually means the insiders have already made the sign of the cross over it, and now the public officials must apply their rubber stamp.

But with his father’s experience clearly in mind, Moreno saw a red flag immediately. “I think the most important thing was what wasn’t there,” he says. “The most important information I saw was probably the lack of community support.”

Instead, what Moreno saw was overwhelming opposition from the neighborhoods around Reverchon. “From the community members, we had email upon email [opposed to the giveaway] from people who lived within the immediate area. We also had emails from the other side, but those were emails from folks who sometimes didn’t even live in Dallas.”

A majority of the Park Board wound up voting in favor of the giveaway, as did the Dallas City Council.  (That made D Magazine editor, Tim Rogers, glad, because he thought the commercial scheme was the right answer to the park’s underlying problems of neglect.) The plan finally died a merciful death this fall when the promoters were unable to come up with the capital they had promised. That made me glad, not Rogers.

People opposed to it tell me they think the plan would have roared on through like a typical 50 families freight train had Moreno not had the gumption and courage to step out in front of it and ask tough questions. What stopped it eventually was the slow-down Moreno was able to impose.

“He absolutely gets the credit for that,” says former Park Board Member Becky Rader, who voted against the plan.

“No question about that,” says current Park Board Member Timothy Dickey. “He did it.” 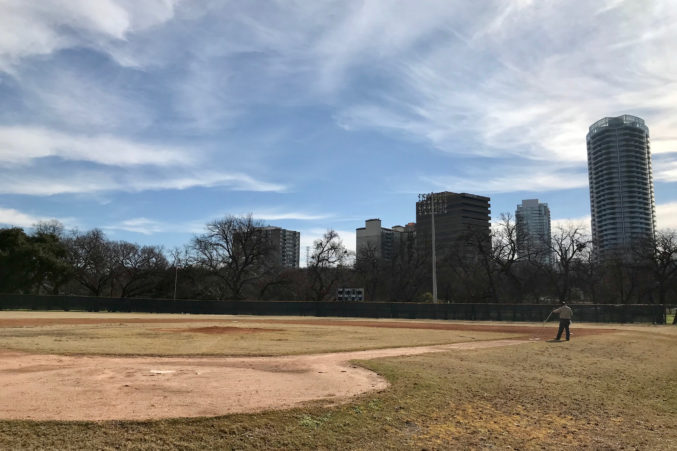 Some people who live in those towers were not happy.
Shawn Shinneman

Rader, Dickey, and Moreno all say they are optimistic about a new proposed plan to repair the park in which the city and the school district would again be partners as they were at Randall Park. But all three have their radar on full alert, because of the proposed cost — between $5 million and $7 million.

They think that’s way too high. They worry that it’s the typical Dallas shop-until-you-drop syndrome setting in, making the whole thing so expensive that the city will be forced to give away control again in order to raise the money.

Dickey says it’s better to do without some amenities in order to maintain control over the finished product. He offers an example: “There’s an old concession stand. One of the big things is, ‘Well, we’re going to have to replumb the concession stand, and it will be enormously expensive.’ Why do you need a concession stand? This is the era of food trucks and entrepreneurs and choices other than turkey legs and hot dogs. To me, it’s like, we don’t need that. That’s expensive.”

But the three are hopeful the proposed partnership with the school district will work out well. Dickey says he trusts Park Board President Calvert Collins-Bratton to ensure that all interested parties will be fairly represented in any negotiations.

“No question about that. He did it.”

Young Jesse tells me there is a personal twist for his family in the way all of this appears to be happening. His father is a devout North Dallas High School alumnus and supporter of the North Dallas Bulldogs baseball team, which has always practiced in the beat-up park at Reverchon. But in part for his son’s sake 20 years ago, he worked to help the Woodrow soccer team at Randall Park. Now Young Jesse is repaying the favor by helping his father’s beloved North Dallas baseball team preserve its access to a refurbished Reverchon.

Young Jesse says he left the Park Board to explore “other ways to help my community.” He has filed the appointment of a campaign treasurer to run for the District 2 City Council seat. District 2 gerry-wanders from far East Dallas to Deep Ellum, through the Cedars south of downtown to far Northwest Dallas. It is heavily Hispanic. The seat will be vacated next year by Adam Medrano, who will be termed out. Young Jesse says he will make an official announcement of his intentions soon.

In addition to the North Dallas/Woodrow baseball-soccer twist, I see another interesting turn of events in this whole saga. Twenty years ago, when his father was fighting to make Randall Park a public place, the public near the park was mainly working class and immigrant Mexican-American.

Most of those scads of emails Young Jesse was talking about in opposition to the Reverchon giveaway came mainly from affluent people in nearby condo towers. But he saw it the same way his father did. Public is public.