This has been a very bad week for sitting and watching. If you don’t mind my saying. And I don’t think that’s a particularly red or blue statement.

So, for personal therapy this week, I hunted up a few people I know who just do stuff. I don’t think I picked them for doing red or blue stuff. Just stuff. As opposed to staring at the TV. Like me.

The first doer of stuff I hunted up was Elizabeth Dry. She had come to the house last week to deliver some plants she wanted my wife to try in her garden, and I heard her drop what sounded like fairly amazing news. I wanted to know more.

As founder and executive director of Promise of Peace Garden and Community Center since 2009, Dry has been what I call an urban guerrilla gardener. Using vacant lots, parking lots, and even boxes on sidewalks as gardens, Dry has pioneered ways for people in poor and under-served neighborhoods to grow their own food.

Right now she is operating a garden on two adjacent residential lots in La Bajada, a century-old mostly Latino neighborhood in West Dallas. For several years La Bajada has been at the epicenter of a bitter battle over gentrification and displacement. I have written a ton about all of that over the years.

Today when I go to meet her at her garden, gentrification battles are not at all what I need to talk about. I need to know what it does for her to just do stuff – you know, dig in the dirt.

It’s not the digging, exactly, she says. It’s the food and the sharing. “When you share food, you are caring for one another,” she says. “It does all kinds of things, even for your immune system.” She gestures around at the rows and rows of edible plants, all raised by kids from the neighborhood under her mentorship. “This is caring central.”

With her at the garden is Alejandra Hinojosa, an intern from the Rio Grande Valley. She is a first semester graduate student at SMU in sustainability and development seeking a dual degree in design and innovation. I don’t even know for sure what that is. I just want to know what she’s doing here digging in the dirt instead of studying.

“I could very well be studying,” she says with a slightly rueful laugh. “I know that. I think it’s just that you can come here and breathe out a sigh and get rid of any kind of pent-up stress or heaviness or weight that you’ve been carrying around all day.”

They take turns telling me a story that feels at first as if it’s going to be about gentrification battles. On a recent weekend, a young couple from one of the nearby brand-new fancy-schmancy apartment complexes wanders up and ask if they can join the people from the neighborhood who are harvesting food. One of the neighbors doing the harvesting is a frosty senior citizen Mexican-American lady not fond of rich young gentrifying gringos.

But as it turns out, this young couple are not exactly gringos. They are Spanish, from Spain. They chose West Dallas because they wanted to be near La Bajada, so they could hear the language. By the end of the afternoon, the young couple and the lady from the neighborhood are animatedly trading recipes and searching the garden together for just the right peppers and herbs.

It’s just a nice story. Nothing about gentrification. I don’t think. Not exactly.

Oh, and that news I thought I overheard when she was talking to my wife is true. It happened just a week ago. Out of the blue and totally unsolicited by her, Dry gets a call from Mercedes Benz Financial Services USA telling her they have been researching her nonprofit. They love what they see and want to become a sustaining financial backer for a period of years.

They meet. It’s on. Funding from Mercedes will allow Dry to recruit more interns and pay them $10 an hour. So the sharing of food and the digging must be working for her. Look at me. I don’t share my food, and I never get calls from Mercedes Benz Financial Services USA.

I also caught up with Mariana Griggs again. Last July I wrote here about the vegetable garden she created in front of her house on Montclair Avenue in Winnetka Heights in North Oak Cliff. The garden, planted in the parkway between the sidewalk and street, raised some eyebrows in her fairly staid neighborhood. In fact, according to the city, it was illegal. 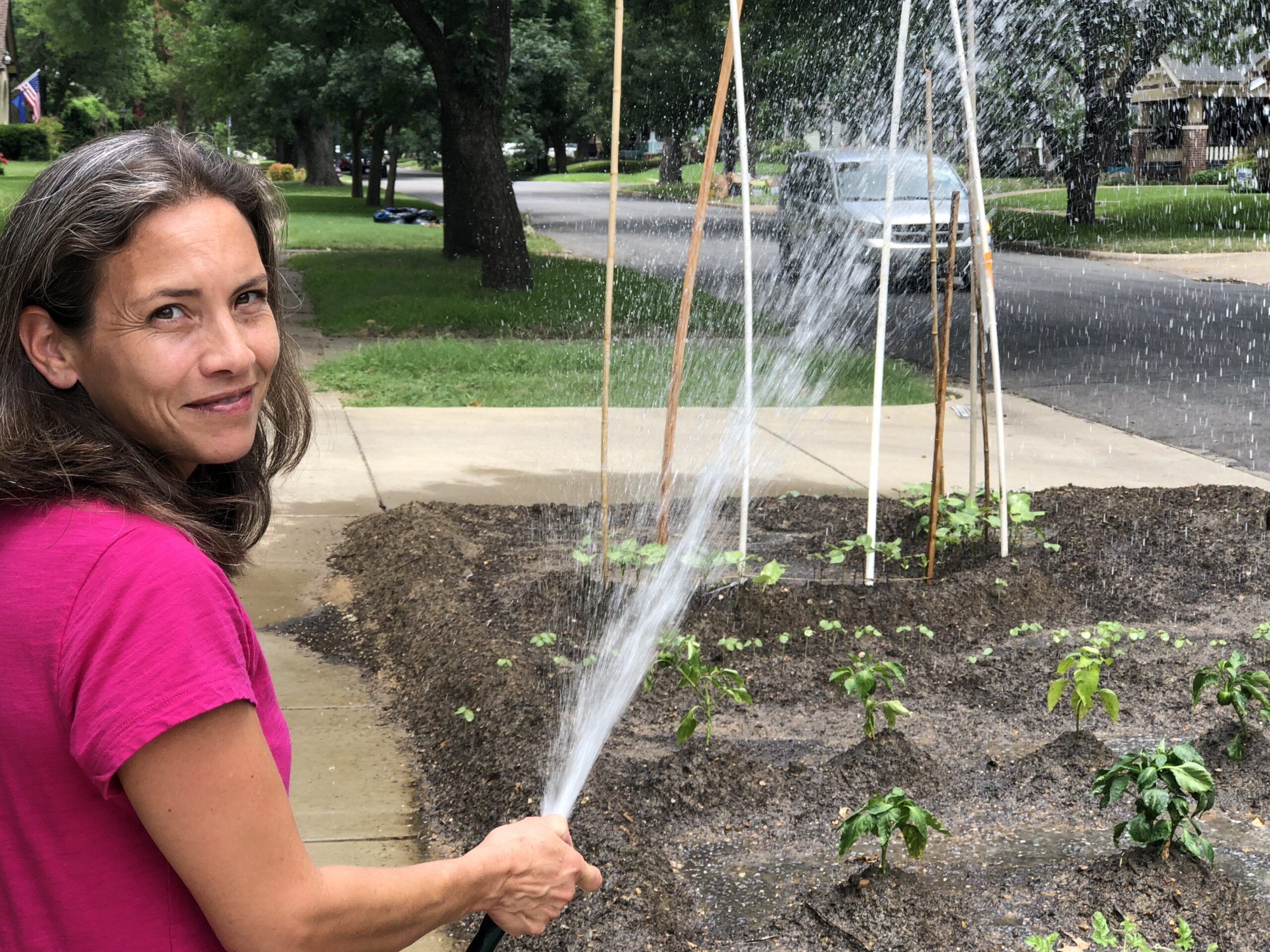 Mariana Griggs found relief from the stress of the pandemic in a front yard vegetable garden.
Jim Schutze

But like Dry, Griggs has been a wily urban guerrilla gardener for a long time. When I checked in on her this week, she told me her various official appeals and hearings should come to an end just about in time for the first hard frost, when it will be time for the garden to take a nice long winter siesta anyway. Her spouse, Scott Griggs, is a former three-term City Council member and recent mayoral candidate, so she is not a neophyte in dealing with the city.

A mother of three with a bachelor’s in business management and a master’s in forensic entomology, Griggs has been a longtime activist promoting community gardens. When we spoke last summer, I asked how she got her renegade parkway garden going, but I guess I never asked what it did for her.

“Stress is really bad, right?” she says. “OK. Everybody has been under stress and anxiety and everything else. I was suffering just like everybody else. It was bad.”

She talked to a counselor. “The counselor talked about something that you hear a lot but you have to repeat it: Do what you can control. Take control of what you can. You forget it, because there is social media, and there is a lot of angst. You don’t want to do anything, but you have to, because once you do you’ll feel so much better.”

Sure, but in the parkway? That’s kind of a middle finger to somebody, isn’t it?

The last person I hunt down is Dallas tax attorney Mark Melton, creator of dallasevictions2020.com, where 150 attorneys offer their services for free to people about to be evicted from their homes. Last week on Facebook Melton posted a description of a recent visit to court.

He and the judge, whom he did not name, engaged in a loud meaningful dialogue obviously designed to convey to the 15 hapless souls sitting out in the pews awaiting their own eviction proceedings that they could buy themselves some time by taking a few simple steps, including going on dallasevictions2020.com. 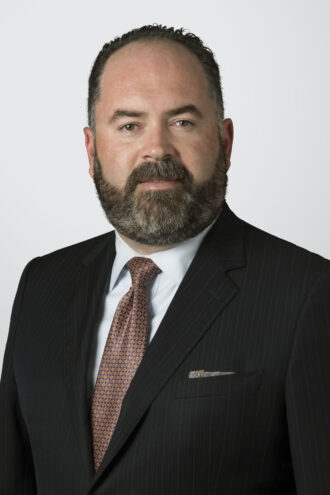 I ask him if what he’s doing is political. He says he doesn’t think so. He says various levels of government have issued sometimes overlapping measures of protection and moratoriums for tenants facing eviction due to the pandemic. Helping people sort out all of those provisions, he says, is something lawyers should be good at.

Melton tells me he is sympathetic with landlords, too. “But if you are making policy, the absolute worst thing that can happen is to have tens of millions of homeless people who have just been evicted sitting outside tens of millions of empty rental units. It’s not like there’s a line of people sitting out there ready to go rent those places when you evict folks.”

He was drawn to the cause of evictions in part because of an experience early in his own life dealing with economic duress. “I can relate to that feeling of extreme desperation,” he says.

But unlike digging in the garden, Melton’s work does not bring release from stress. He tells me an absolutely horrible story, just one of his most recent cases, about a family with a four-year-old boy in a coma living at home on a ventilator, about to be put out on the street.

“I spend every day talking to people who are having the worst days of their entire lives,” he says.

Like Griggs, Melton has sought counseling to deal with the stress of these times. He is especially haunted now by the knowledge that the last of the eviction protections is soon to expire.

“It’s hard not to think about the fact that we’re seven weeks out from the end of the moratorium, and all these people have no recourse,” he says. “Every time I want to put my head down and stop for a second, that likely means that somebody else is going to be homeless tomorrow.”

In the face of it, he says, the best he can do is to keep doing what he can. And there, he sounds like a gardener: “If we all just tended to our own little corner of it,” he says, “the world would be a much better place.”