Not long before he ventured to Oak Cliff’s Harrell Budd Elementary School to cast his ballot, the 86-year-old Willie Taylor spotted a jogger in his neighborhood and called out to him. “You voting today?” he asked. The man replied, “I can’t.” He was undocumented.

Taylor, who has voted on Election Day for the past 10 years, said he was thinking of that jogger as he walked into the elementary school. A trio of volunteers guided Taylor’s truck to the school’s side entrance. They took his wife, who is disabled, by her arm and helped her walk into the polling place.

“If nothing else, I’m voting for that guy,” Taylor said of the jogger. “He can’t vote, and I can, so how am I not gonna be here?” 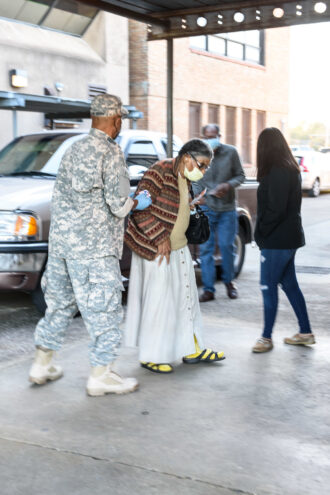 Dee Taylor is helped into the polling place at the Harrell Budd Elementary School in Oak Cliff on Election Day.
Bret Redman

Taylor is among the more than 121,000 Dallas voters who chose to forgo early voting and cast a ballot on the final day of the election. The lead-up to November 3 had more anxiety than the day itself, considering the fight over mail-in ballots and the now-infamous Joe Biden bus incident outside Austin. While some voters said they were anxious about their voice being heard, the day was largely anticlimactic and uneventful.

When voting began at 7 a.m., the polls were quiet and the crowds were thin. The county’s interactive map showed nearly all polling places with lines of 20 minutes or less. They stayed that way for the rest of the day. It might’ve been the record early voting turnout, or a byproduct of a contentious, exhausting election cycle. The final tally on November 3 was about 90,000 less than who showed up in 2016. Either way, many Election Day voters seemed eager to get this whole thing over with.

“I’m pretty tired of all of it,” said Peter Flowers, a 41-year-old commercial real estate developer in Highland Park, outside the city’s administration building polling site. “I’m just ready for it to be over.”

Other voters shared that exhaustion, but were too concerned about their candidate losing to think about anything else.

“I’m stone-cold panicked,” said Joanna Grossman, a 52-year-old law professor at SMU. “I don’t think the planet, let alone the people on it, can cope with another four years of Trump.”

Grossman was a poll watcher at University Park United Methodist Church, where Biden supporters and Trump fans had gathered to cheer on the occasional voter walking to and from the polls. The Biden camp blared Rachel Platten’s “Fight Song” and handed out blueberry muffins. The Trump group shouted “MAGA!” at the drivers passing through the church parking lot.

Nearby, 15-year-old Highland Park High School student Marshall Engel stood on the corner of Westchester Street, a stone’s throw from where the Scots play football. Holding a Biden-Harris sign, Engel, who is Jewish, relayed how he feels like an outsider in the deep-red community.

“Last year, a friend of mine and I were talking about bar mitzvahs at school,” he said. “A couple of guys beat us up because we weren’t following ‘American values.’”

Engel, despite this occurrence and being too young to vote, said he felt compelled to share his support for the Democratic presidential ticket. The sign was his mom’s idea, he said, but he leapt at the chance to do something on Election Day, even if he couldn’t cast a ballot. 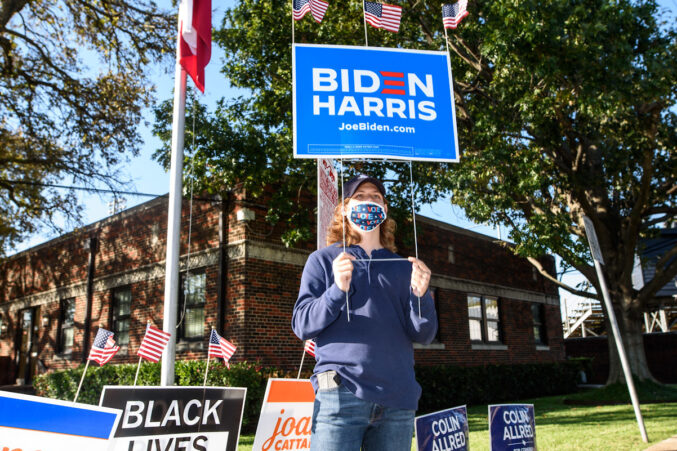 At 15, Marshall Engel is too young to vote, but wanted to make a statement of his own outside the Highland Park Administration Building.
Bret Redman

“I’m in the minority at my school, but I’m very concerned about another four years of Trump,” he said. “That’s one of the main reasons I’m supporting Biden: out of fear of Trump.”

Moments later, a man with a MAGA hat and a truckload of tiny Trump flags pulled into a parking space next to Engel. After planting a dozen of those flags in front of the 15-year-old, the man shared a cordial nod, said, “have a good day,” and drove off. Other drivers weren’t as cordial, shouting “TRUMP 2020” at the high schooler. The day was full of scenes like that: constant reminders of animosity that never quite boiled over into anything serious.

In Plano, voters and volunteers at Davis Library were momentarily shaken when a white truck boasting multiple Trump flags careened through the parking lot, bypassing signs forbidding entry. Democrats on hand said the incident was clearly electioneering, whereby voters wear paraphernalia too close to polling places. But this momentary hiccup was the only break from an otherwise monotonous day at the library, in which both Democrats and Republicans showed up at 7 a.m. to tout signs supporting local candidates like Van Taylor, Lorenzo Sanchez, and Lulu Seikaly. Sanchez himself was on hand to greet supporters.

“This is a race on turnout,” said the candidate for House District 67. “I’m feeling pretty positive about the work we’ve done knocking on doors and getting people out.”

The other side felt similar.

Mulos had reason to feel good. Taylor beat Seikaly by more than 50,000 votes, and Jeff Leach defeated Sanchez. When polls closed and tallies started trickling in, hope for a blue Texas quickly soured and voters turned their attention to the national race. For the Democrats, the pain of 2016 was still lingering. They knew the race wouldn’t be over that night, as states like Pennsylvania and Arizona and Wisconsin would take hours or days to count high volumes of absentee ballots.

“I remember being at a watch party and someone saying to me, ‘Trump’s gonna win this thing,’” said Grossman. “In the moment, I absolutely knew there was no way. Then, of course, he was right.”

Meanwhile, the GOP enjoyed a successful night across the state. John Cornyn retained his Senate seat, and Arlington Republican Ron Wright defeated his Democratic challenger for the U.S. House. GOP incumbents held their own in Tarrant County, too, despite Democrats’ plans to build on Beto O’Rourke’s victory in the historically red county two years ago. However, as of this writing, roughly 20,000 mail-in ballots still need to be counted. Election officials say staff shortages by COVID-19 have led to counting delays, and there’s also talk of legal grappling over 18,000 mail-in ballots, which apparently have faulty barcodes and are being counted by hand.

“Desperate people do desperate things,” said one election attorney. “And I think the Republicans are feeling a little desperate in Texas.”

They needn’t feel desperate. Even before any races were called, diehard Republicans were shooing away any notion that their party should be worried about local or national races. At midday, 78-year-old Plano resident Russ LeClaire parked his car at Davis Library, grabbed his cane and a Trump sign, and joined his fellow Republicans near the entrance to the polls. He was optimistic in 2016, he said, and he was feeling the same way this time around.

“My wife told me that she’ll get me a bottle of bourbon if Trump wins,” he said. “I think I’m having bourbon tonight.”

Want to Be a Hacker? Come to Dallas.