One day away from Thanksgiving, the city of Dallas’ COVID-19 czar says he is “deeply concerned” about patient demand pushing the region’s hospitals beyond their capacities. Dallas County incurred several days in a row of more than 1,800 new COVID infections. With hospitals filling up, healthcare leaders are nervous about having enough staff to handle the coming surge of COVID patients in addition to standard seasonal demands. Dallas County is joining many others across the country in anticipating what appears to be a harsh winter.

According to the Texas Department of State Health Services, the trauma service area that includes Dallas-Fort Worth has only 9 percent of its total hospital beds available and just 6 percent of its intensive care unit beds. Under normal circumstances, one in three beds is empty at this time of year. “We are deeply concerned about overwhelming healthcare capacity,” says Dr. Kelvin Baggett, the COVID-19 czar who is keeping his eye on the data. “They are overburdened and have combated this for over eight months now.”

While hospitals can expand and convert space for additional beds, the limiting factor becomes the staff. While he didn’t have a total number, Baggett says he’s receiving reports from area hospitals that caregivers are catching the virus in the community and having to call in. Unlike earlier in the year when only certain areas of the country were experiencing surges, the entire U.S. is setting records for new cases. That means no traveling nurses or physicians can act as a release valve for the hospitalizations stacking up in Dallas and elsewhere.

“Nationally, the strain put on the healthcare capacity is creating a staffing demand that has escalated tremendously,” Baggett says. “We have to consider the burden we are placing on our healthcare heroes and not do anything avoidable to put them more at risk.”

Unfortunately for public health advocates, the city and county have little power over shutting down sectors of the economy to slow the spread of the virus. In El Paso, an appeals court struck down the county judge’s order to shutter non-essential businesses despite case numbers overwhelming its hospitals. Texas National Guard troops are there helping move bodies after the morgue overflowed.

New York shut down schools last week after the city reached a 3 percent test positivity rate. In Texas, the positivity rate is hovering between 10 and 12 percent, but some Dallas providers are reporting as high as 30 percent positivity at their testing locations. Over the past week, Dallas County’s positivity rate is 16.8 percent, which is up from 15.3 percent the week prior. The seven day rolling average for daily, new infections is now 1,321, an increase of about 22 percent over last week’s 1,078. It is up 125 percent in the past month; the 588 recorded before Halloween was the highest seven day average since July. 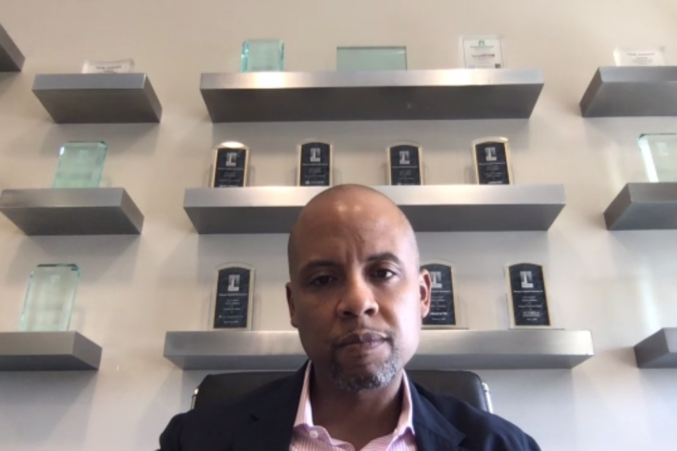 Dr. Kelvin Baggett, the city’s czar for COVID-19 response, Zooms in from his office.

Baggett says the city will continue to encourage masking, social distancing, and avoiding large crowds. There isn’t much else it can do; Gov. Greg Abbott is in control through his disaster declaration. Meanwhile, caregivers are exhausted. They’ve been fighting this for nearly eight months and there is no sign of it letting up.

“They’re fatigued, they’re tired,” says Dr. Mark Casanova, the president of the Dallas County Medical Society. “I’ve seen in the eyes of individuals I know quite well, it’s a combination of that fatigue, that being worn down. But it’s still a strong desire to do all they can and then I think that factors in—that leads to, frankly, what gives us frustration. Dismay.”

Thanksgiving is likely to make things worse, Baggett says. Public health officials say that indoor, maskless gatherings are a big part of why Dallas is seeing such an increase in cases.

“Right now, the most concerning period is related to Thanksgiving,” he says. “We know that there is a desire to gather, so we are deeply concerned and continuing to advocate consistently with the CDC guidelines that you have Thanksgiving with those who live within your immediate household.”

Baggett worries that asymptomatic carriers are lulling people into a false sense of security. “We are seeing a high degree of people who are spreading without a diagnosis or symptoms,” he says. “You may be in the company of someone that you believe is absolutely fine, but you don’t know that.”

Dallas County Judge Clay Jenkins echoed the sentiment on Twitter. “It’s up to all of us to sacrifice doing those things that we would understandably and selfishly like to do now until a vaccine is in wide dissemination and hone to the requests of our healthcare heroes for just a little bit longer to keep our families, our community, our economy, and our country safer from the threat of the COVID pandemic,” he wrote.

Baggett says many people are not following the proper protocol after a potential exposure and testing. And he warns against treating a negative result as a sense of security; you are just as vulnerable as you were before the test.

“We’ve also received some feedback around people who, for whatever reason, are going to get tested, and while they’re waiting to for the test to turn around, are still engaged in the same social or personal or professional activities that are creating some risk to others,” he says. “If there was a reason enough for you to go get tested, please wait until you get a result before you engage and take every precaution that you possibly can.”

But it isn’t all bad news. Baggett says he is encouraged by the reduction in the fatality rate among COVID-19 patients. He is heartened that vaccines could be distributed to healthcare providers within the next few weeks. As providers gain experience with the disease, they improve their ability to keep people from dying from it.

“Once you better understand how to diagnose it and have the most effective treatments that are more widely available, you are going to see improvements,” he says. “That’s the bright spot.”