On the morning of Election Day, voters from Oak Cliff to to Plano woke up to find that the lines were nonexistent, the poll workers were polite, and the sky had not (yet) fallen. While businesses downtown boarded up their windows, Dallas denizens took to the mostly quiet polls to cast their ballots. While plenty of voters were anxious about the results, most people captured in this series were happy that the big day was finally here; if, for no other reason, they will now have one less thing to worry about. Maybe. Possibly. No one really knows, but people on both sides of the aisle agree: “I’m ready for it to be over.”

Mark Twain is a polling site in South Oak Cliff. On Election Day of 2016, it overwhelmingly voted for Hillary Clinton over Donald Trump. 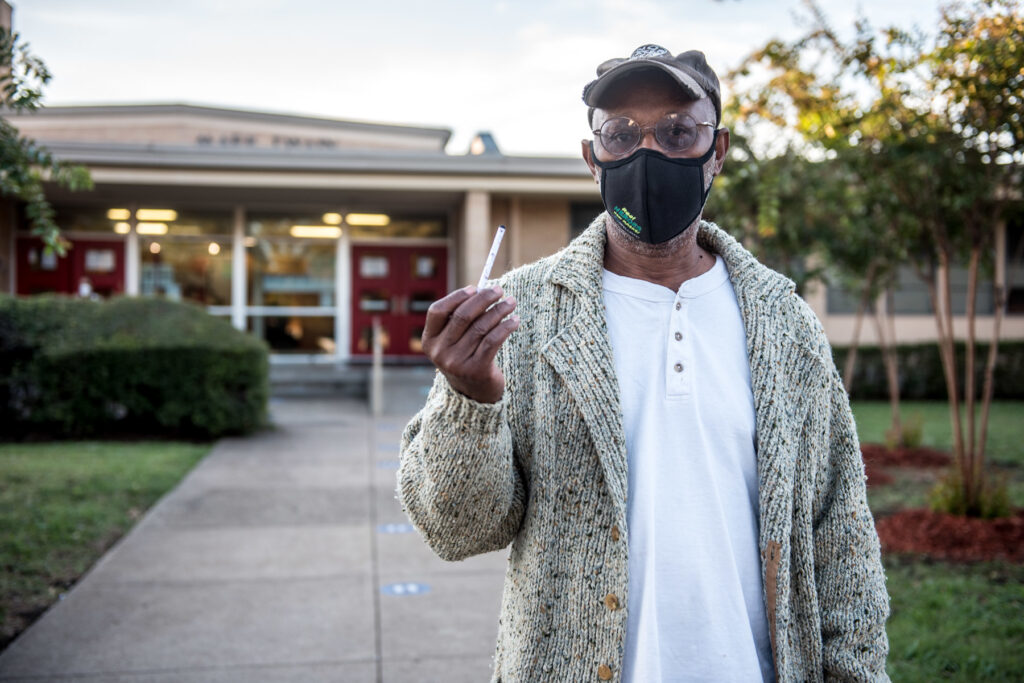 “I stand against hate of all kinds. There’s one heaven and one hell, and we’re all going to one of them. That’s an appointment we can’t miss. As a Christian, you can’t hate, no matter the circumstance. That’s why I stopped that riot at Dixon Circle,” he says, referring to the community’s reaction after Dallas police shot a Black man named James Harper in the back after a foot chase in 2012. “We can’t hate each other and expect to get anywhere.” 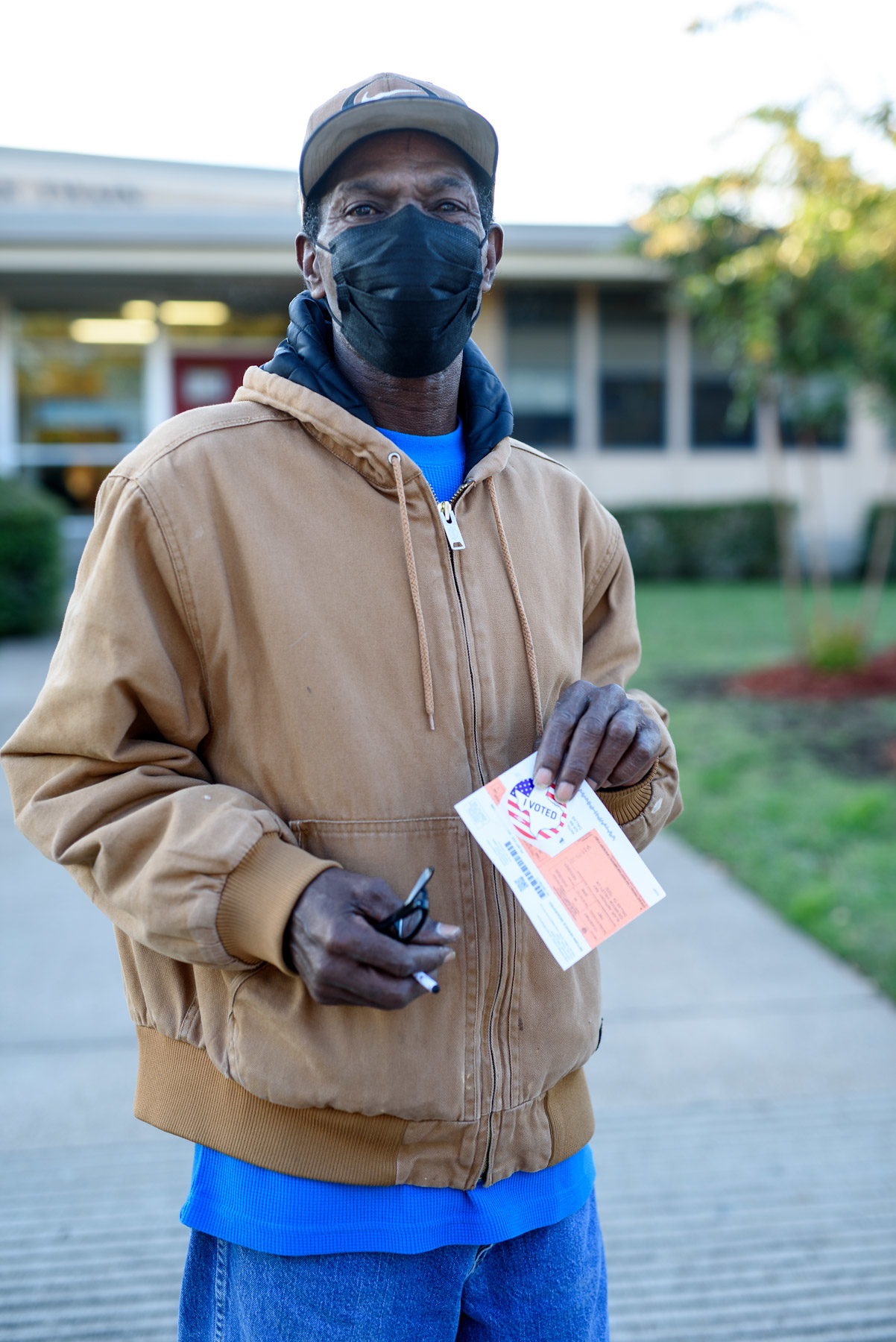 “This is my first time voting. I gave the man four years, and now it’s time for something new.”

When asked what inspired him to finally cast a ballot, Blair said he is frustrated by the way the president is handling the coronavirus pandemic. “My mother is really struggling, so I did this for her.”

Harrell Budd is a polling site in Oak Cliff, east of Interstate 35, about two miles south of the Dallas Zoo. It overwhelmingly voted Democrat on Election Day in 2016. 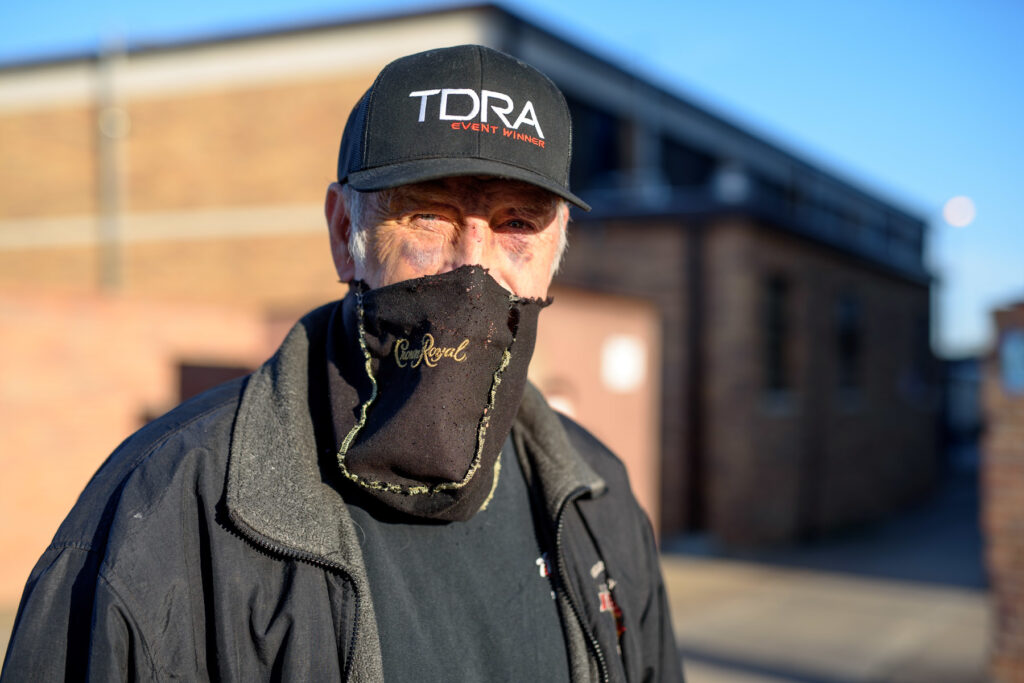 “That was easy. I spend a lot of my time drag racing, and lately, this election is all anyone wants to talk about. These young guys: it’s politics this, coronavirus that. I just want to race, man, but a lot of people would like to be able to have this ability [to vote].” 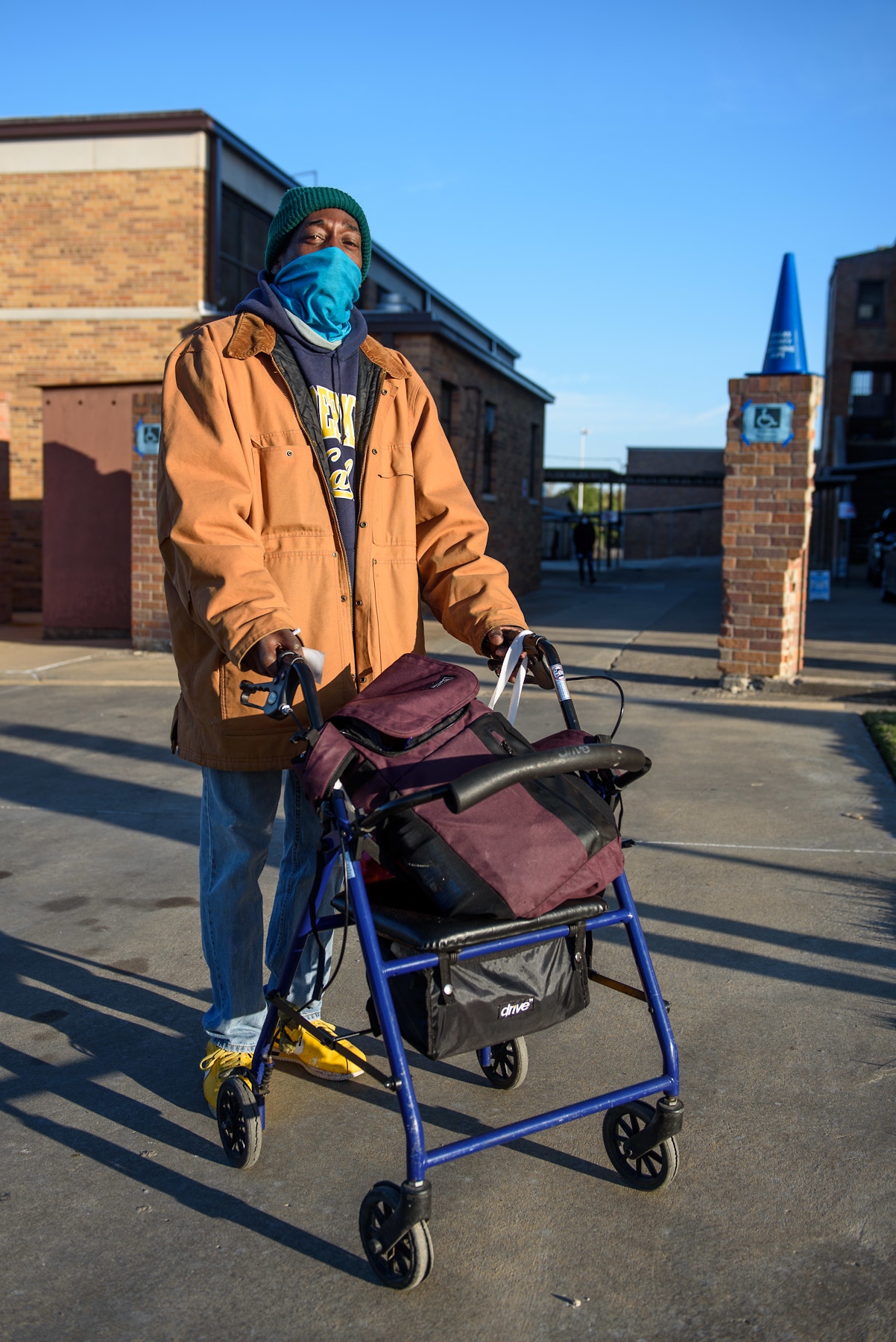 “The way these guys are going at each other, it’s hard to tell who’s telling the truth or not. I’m not a big fan of the negativity. You just gotta love.” 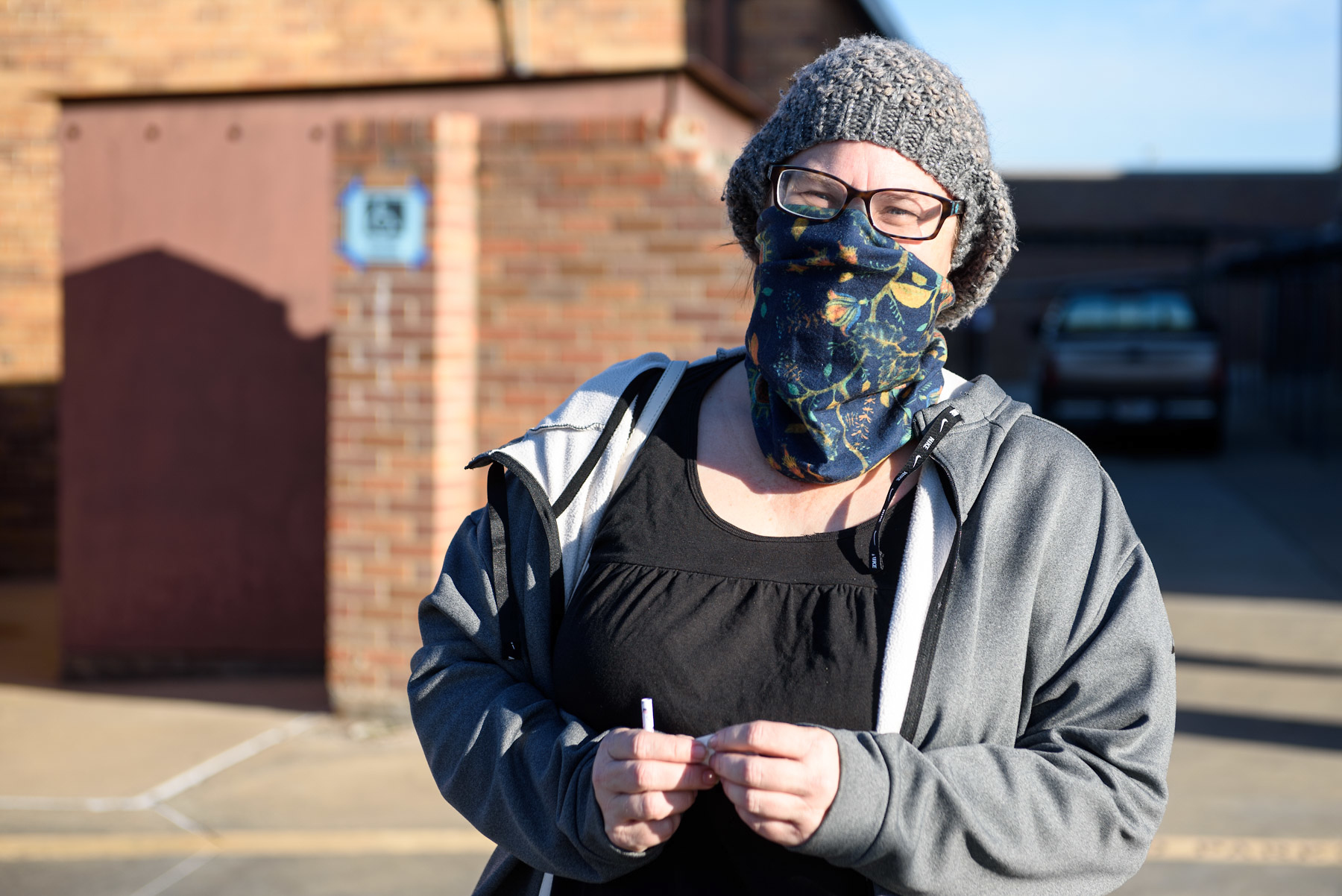 “People need to come to their senses and choose to love. I’m tired of the unrest and the destruction. I’m just trying to stay positive and do my part.” 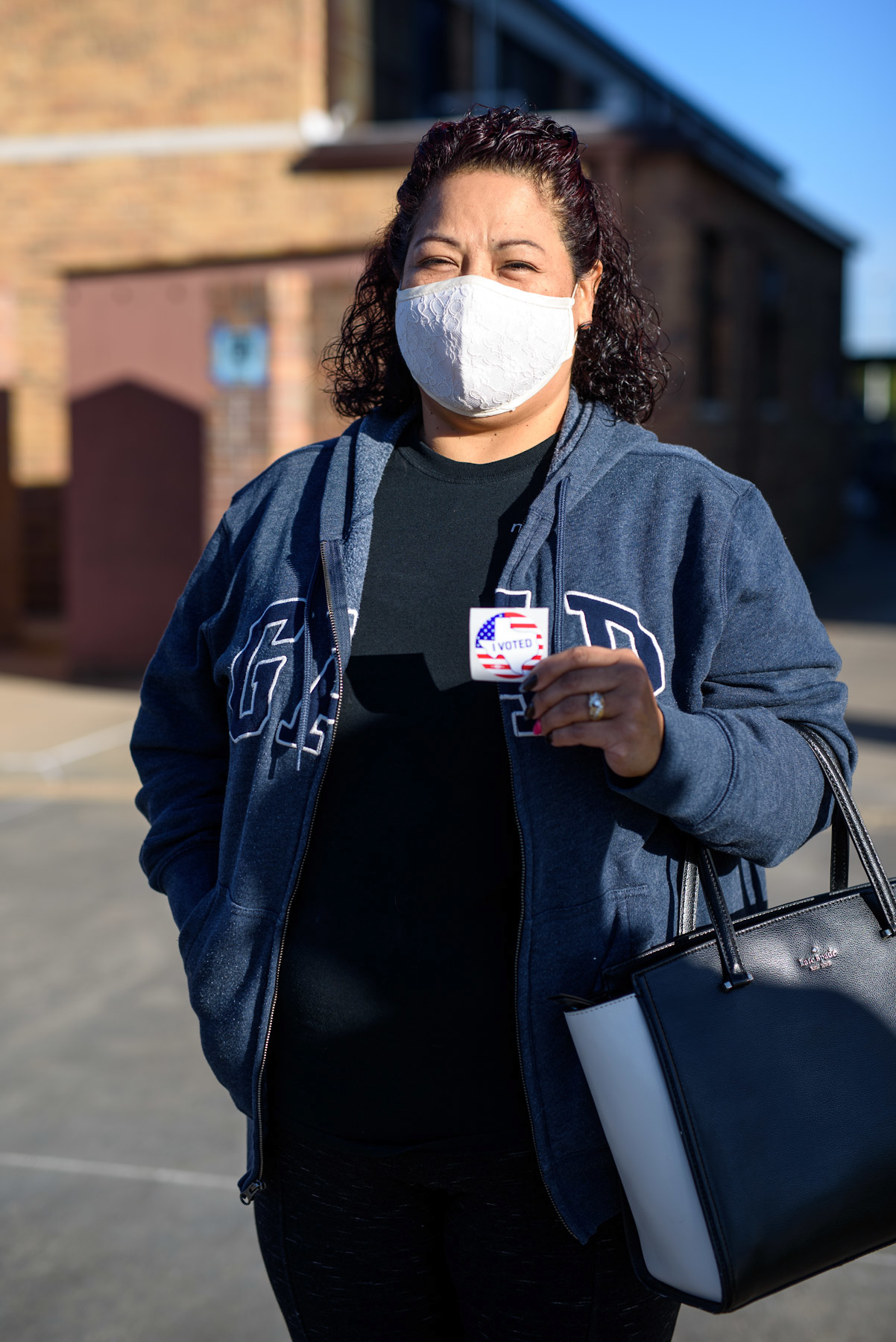 “You hear the stories about violence, so I did have a little bit of that in the back of my head this morning. But I wasn’t going to let that keep me from going out.” 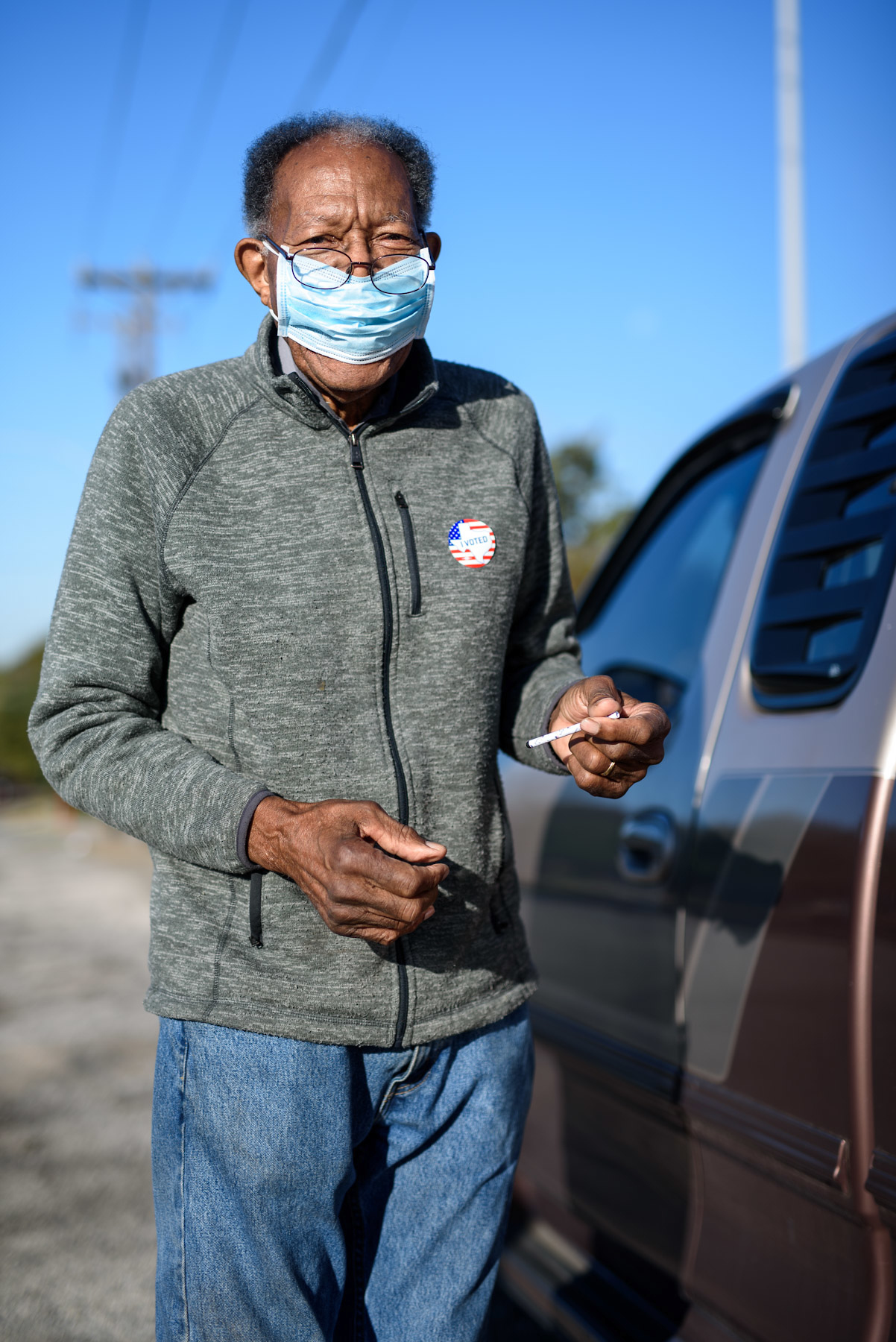 “I’ve voted here every election for 10 years. They made some upgrades, too, which was nice. For all the talk about this year being crazier than ever or what have you, this was the smoothest voting experience of my life.” 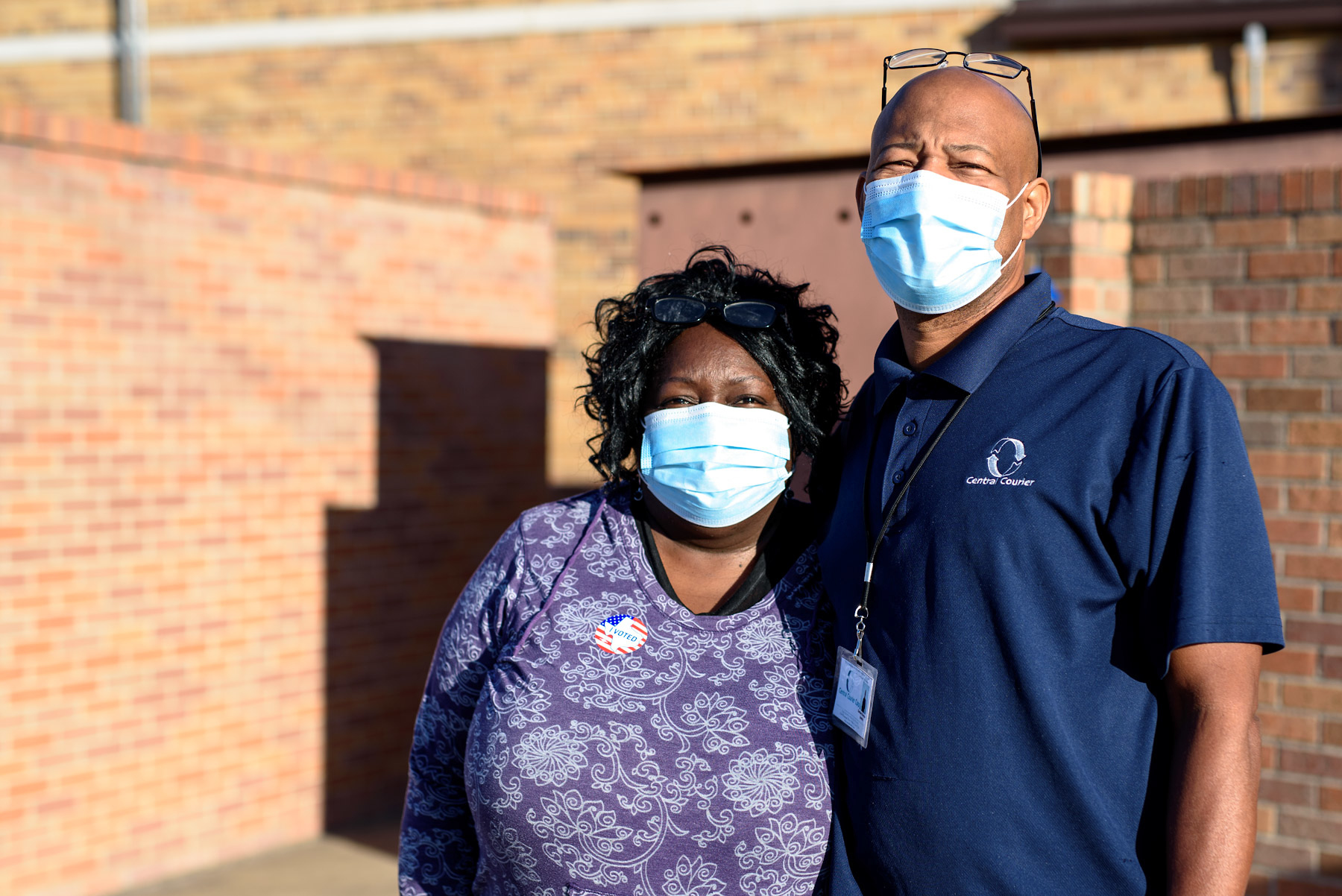 Kathy and Garland Horton, both 52

Kathy: “I don’t think either one is gonna really represent me, but one candidate has a softer heart.”

Garland: “If you don’t vote, you can’t complain. Government will always let you down, but you have to at least raise your voice with your vote.”

This is a polling site in Highland Park. It overwhelmingly voted for Donald Trump in 2016, as well as straight ticket Republican, when that was allowed. 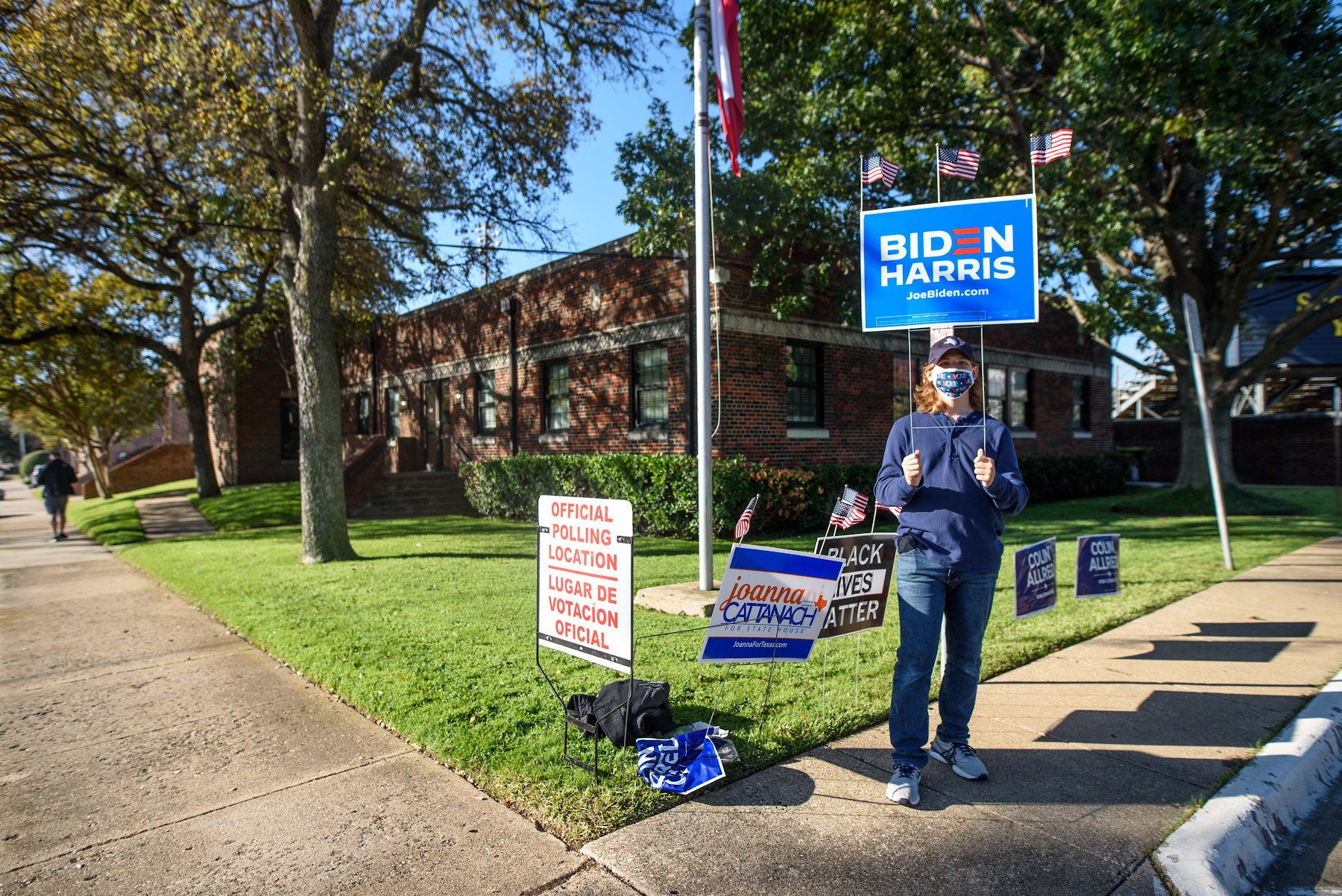 Marshall Engel, 15, is too young to vote, but he still made his way to the Highland Park Admin Building to voice his support for Joe Biden.
Bret Redman

“I’m in the minority at my school, but I’m very concerned about another four years of Trump. That’s one of the main reasons I’m supporting Biden: out of fear of Trump.” When asked if his parents were comfortable with him hoisting a Biden-Harris sign on a street corner in Highland Park, Engel chuckled. “Oh yes. This was my mom’s idea.” 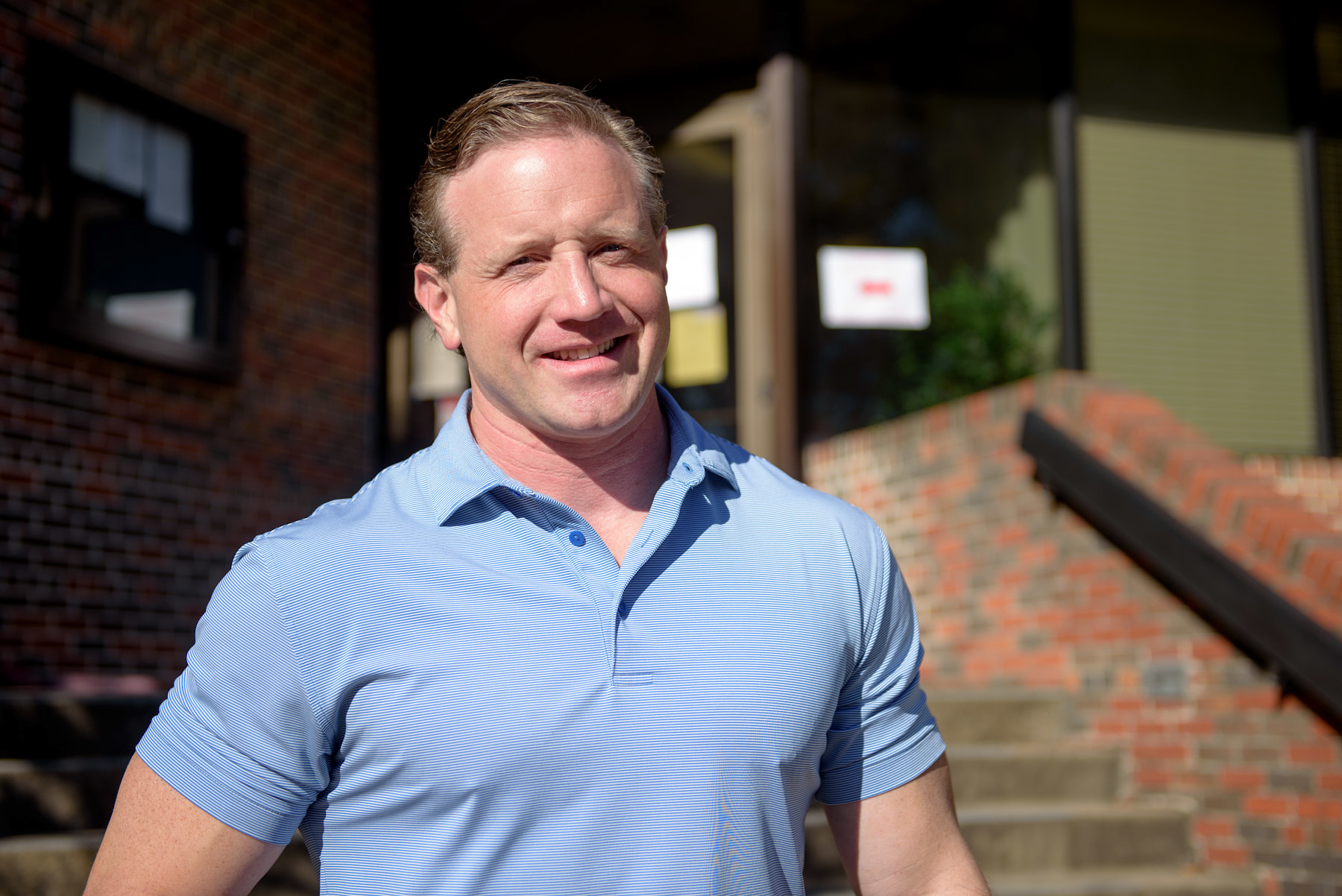 This is a polling site in University Park. It also overwhelmingly voted for Donald Trump in 2016, as well as straight ticket Republican, when that was allowed. 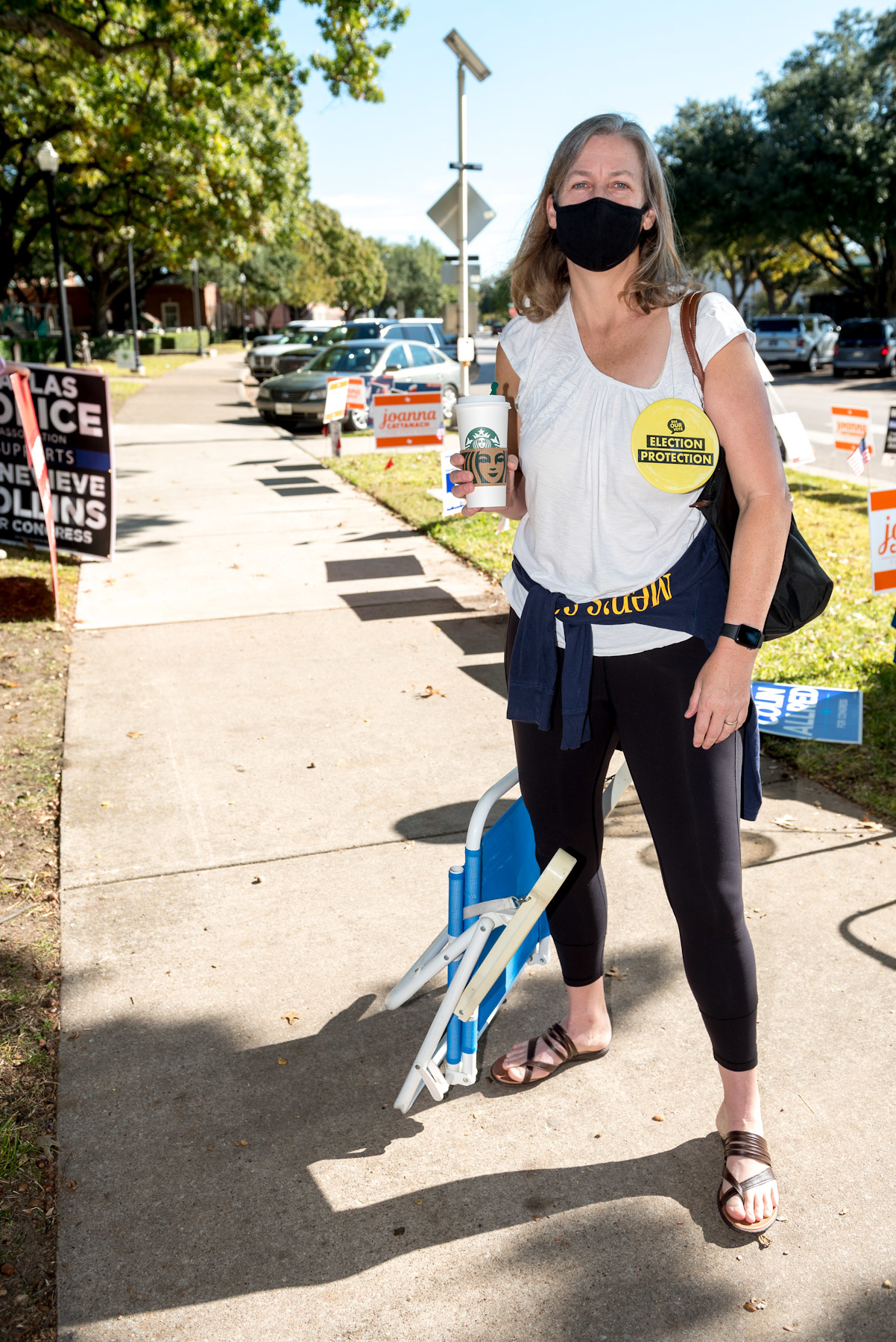 “I’m stone cold panicked. I don’t think the planet, let alone the people on it, can cope with another four years of Trump.” 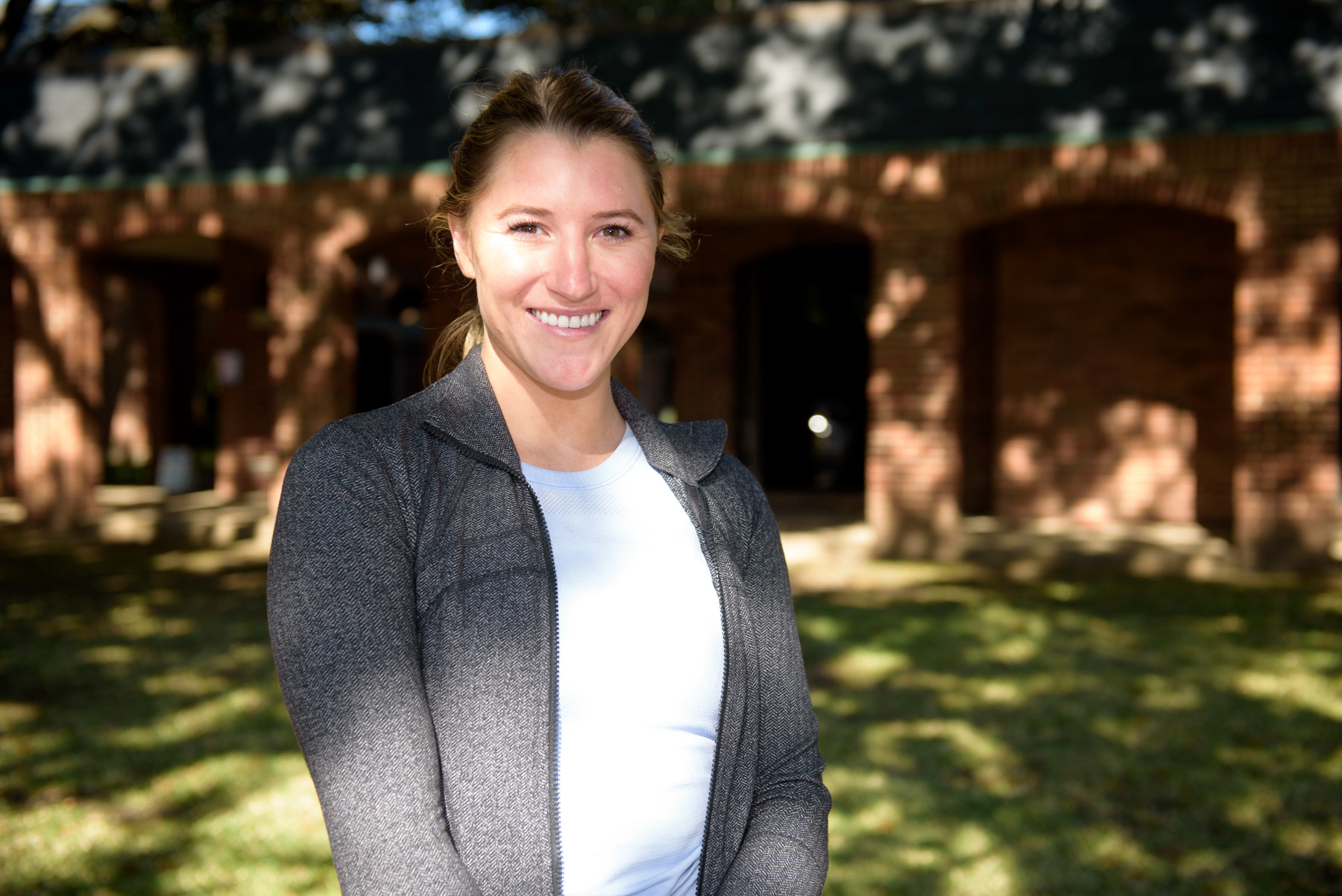 “I’m anxious, but getting too nervous isn’t gonna help. I don’t want to wake up tomorrow and realize I wasted all this energy, because worrying about it isn’t going to change what happens. But yes, tonight I’ll have the butterflies.” 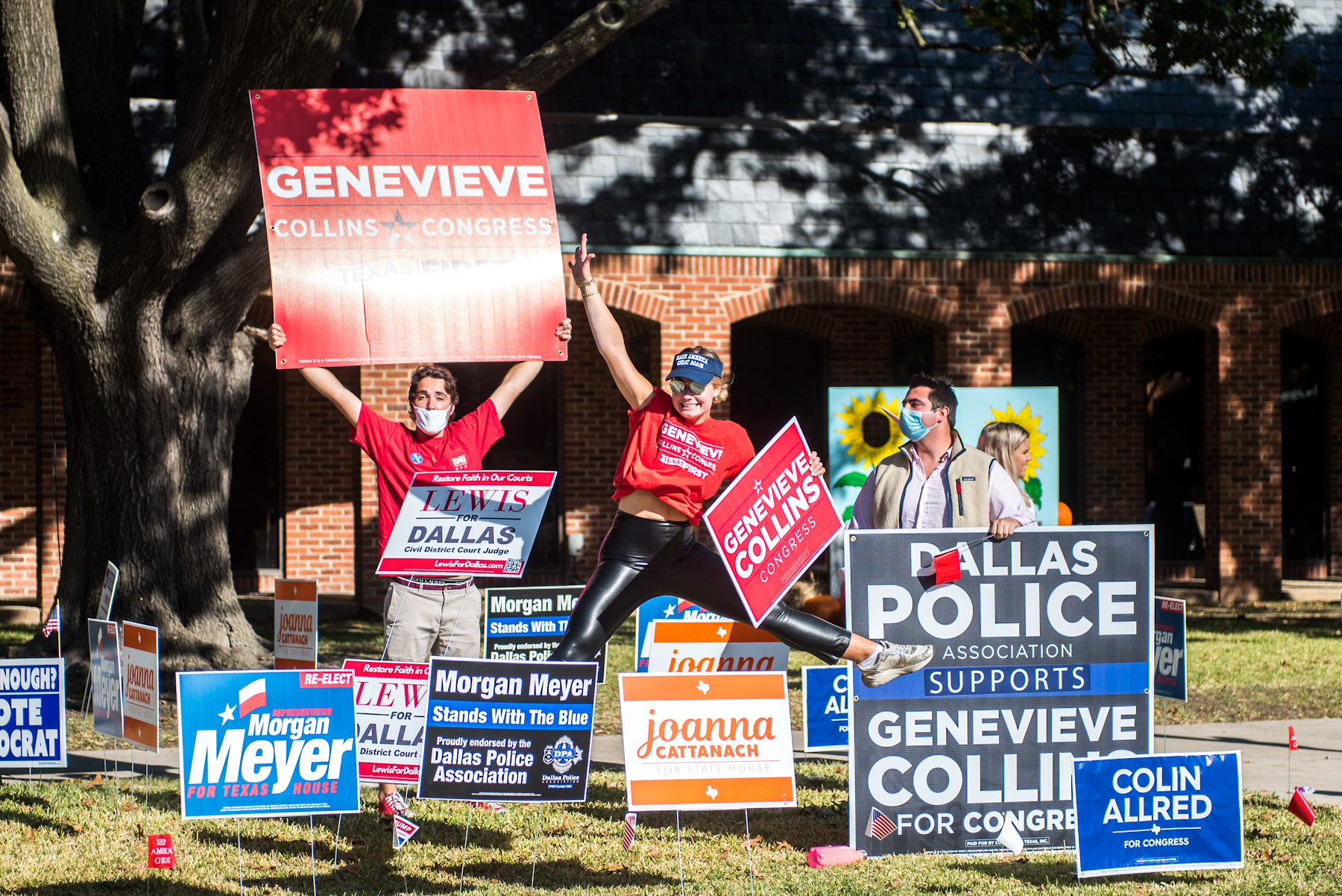 Elizabeth Fredfield, 21, an SMU student, photographed in the middle

“I’m keeping positive. There’s some good energy out here, and we have some good candidates on the ballot.”

Davis is a polling site in Northwest Plano. Democrats have their eye on Collin County, a longtime Republican stronghold that has been trending blue in recent years. 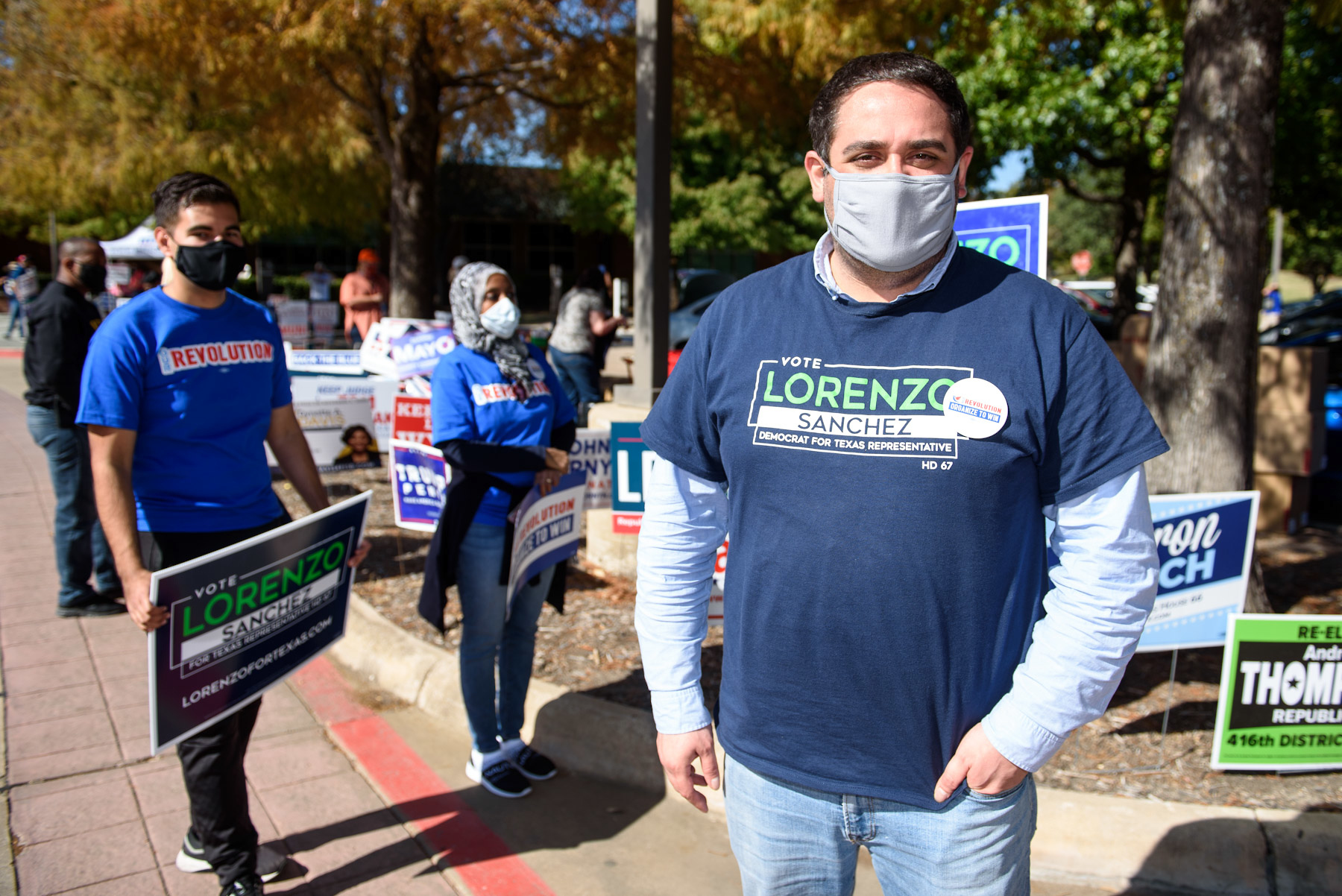 “This is a race on turnout. I’m feeling pretty positive about the work we’ve done knocking on doors and getting people out. I think people see that this area is changing, and it’s a change they’re happy about.” 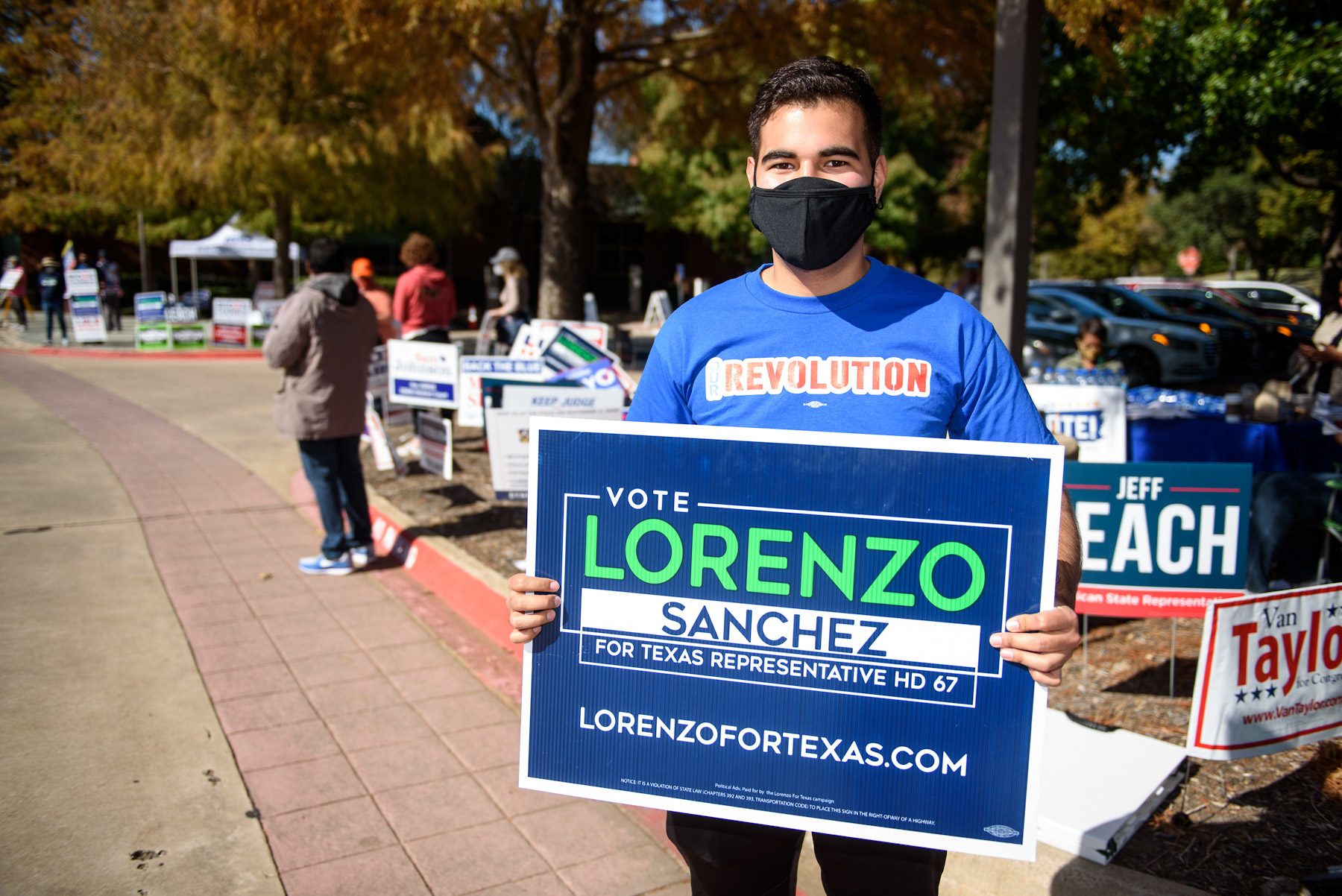 “I’ve lived here my whole life. I remember when Stonebriar was just a grass field. This area has changed a lot in the last few years, and I think it’s turning blue.” 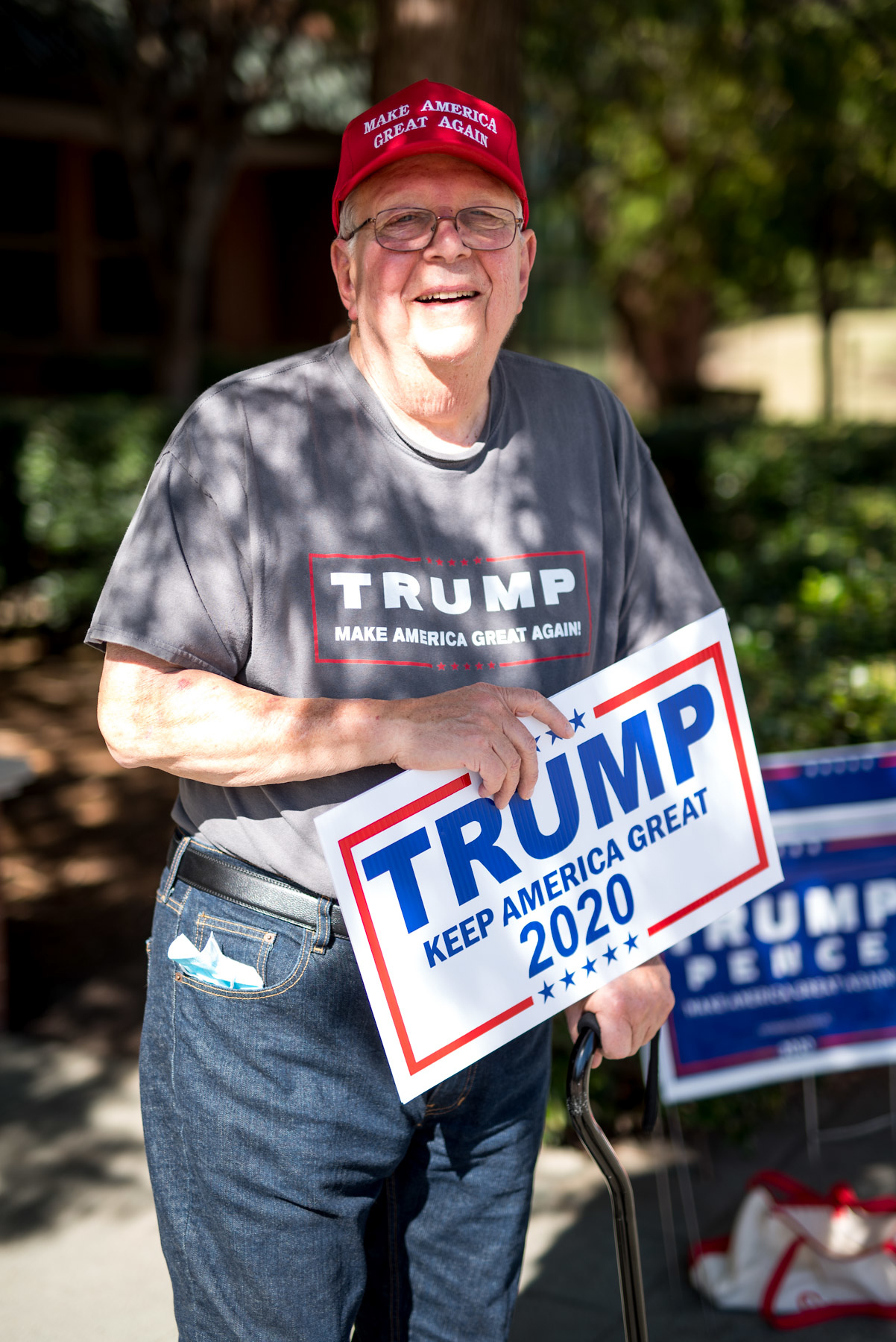 “My wife told me that she’ll get me a bottle of bourbon if Trump wins.” 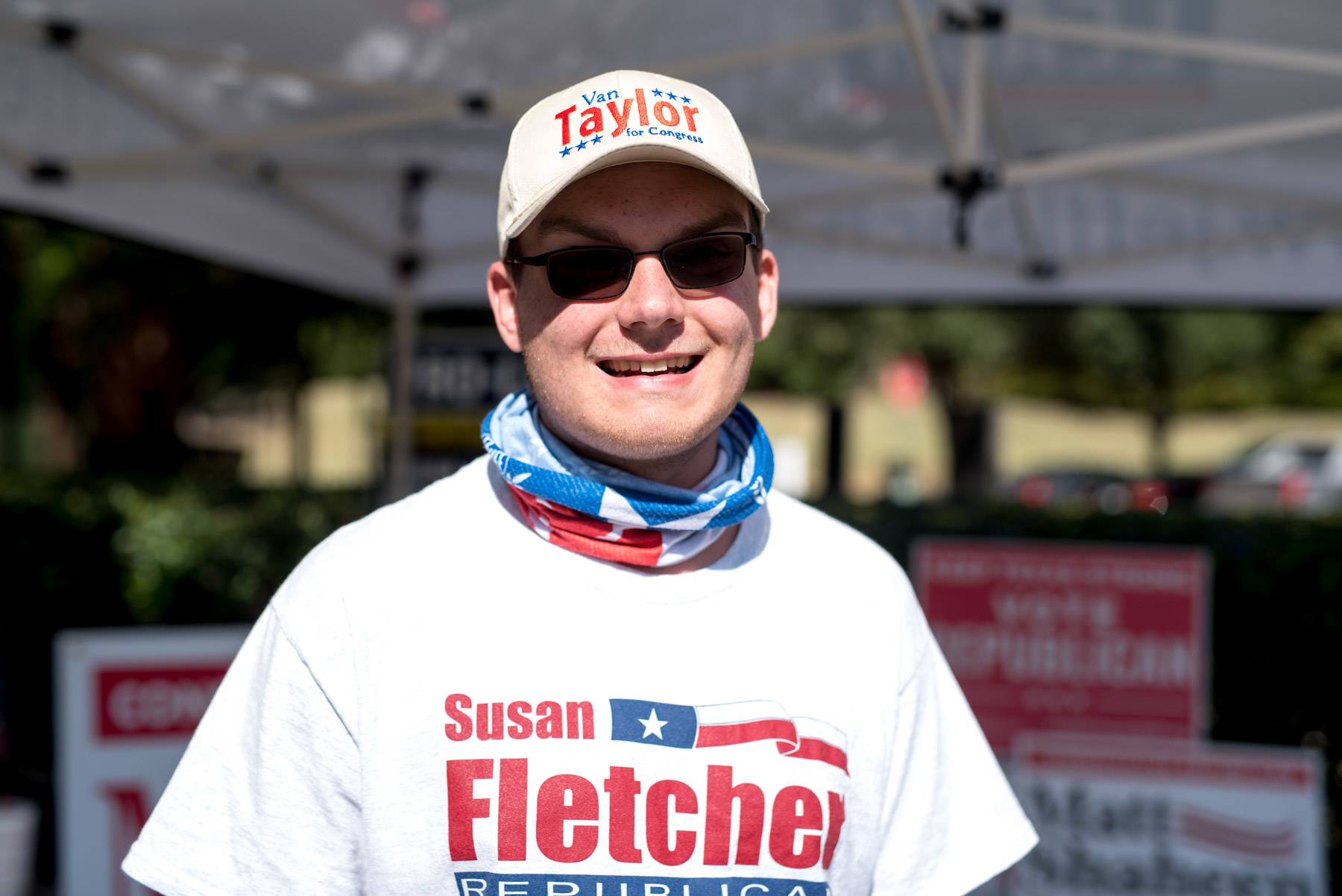 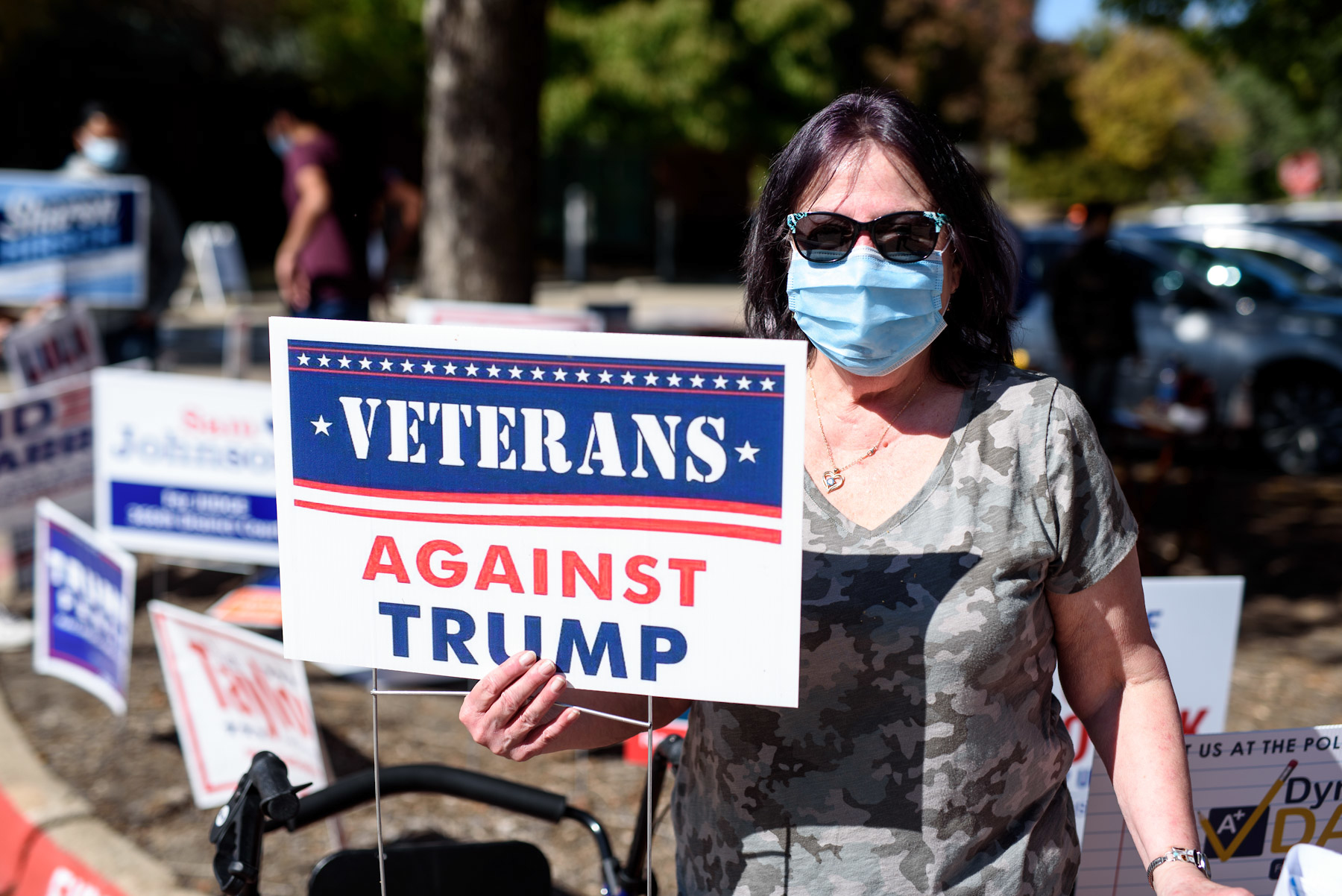 “I can’t vote for anyone who thinks there were airplanes during the Revolutionary War.”