Barring some sort of tectonic political shift, the City Council will next week approve — likely unanimously or close to — the new master plan for Fair Park. The Council was briefed on the plan Wednesday afternoon and it received unanimous approval from the Park Board in June. Most on Council had no concerns about the merits of the plan or the ability of the nonprofit Fair Park First to raise $58 million to complete the first phase.

“It won’t be an issue for them,” said Councilman Adam Bazaldua, who represents Fair Park and the surrounding areas, after I asked him what happens to the project if that money isn’t raised. “I have full confidence in seeing the vision executed.”

I dug into the plan in detail a few months back after the Park Board OK’d it, and it doesn’t seem like there were any changes to report. The broad strokes include transforming 800,000 square feet of surface concrete into green space, building a community park accessible to the public year round, adding a few new pocket parks around the edges, looping trails that guide you through the property and connect with the surrounding neighborhoods, a new parking structure, a hotel with surface-level retail and restaurants, an overhaul for the areas near the existing venues and the Cotton Bowl, and a greening of the land that will help curb a heat island effect that makes the grounds 45 degrees warmer on summer days.

The fundraising will be overseen by a consulting group called Rise 360 that helps nonprofits raise money. Last month, Bill Lively, a man who has been described as a “master fundraiser,” volunteered to advise the capital campaign. He oversaw a $334 million campaign to build the AT&T Performing Arts Center and helped generate $280 million in donations as the director of the campaign for SMU. He also served as head of the Super Bowl Host Committee, bringing in $25 million ahead of the 2011 event.

“We all know Dallas has a lot of good causes, and that there is a lot of competition for philanthropic funding, but we’re very confident because it’s Fair Park, because of its history, and because of its potential and vision we have with Fair Park First and its mission that we can make it among the top priorities in the community,” said Ben Casey, a consultant with Rise 360.

It’s broken up into three phases, the final of which will take up to 20 years to complete. The city wants the first one done in five years.

The first phase includes a 14-acre community park at Fitzhugh Avenue and Lagow Street, at the eastern corner of the property, a pocket park near the entrance at Martin Luther King Jr. Boulevard, and a parking garage that will ensure the city meets its contractual obligations with Dos Equis Pavilion and the State Fair of Texas for parking spaces. The 2017 bond included $50 million for improvements at Fair Park, but the nonprofit will need to raise $58 million in private donations to pay for the first phase. It has a plan to do so by 2024.

Brian Luallen, the executive director of Fair Park First, said Wednesday that there were already commitments pending City Council approval of the master plan but declined to say anything further. There also appears to be interest in leasing some of the properties in the agrarian district. That portion of the property includes the Pan American Arena and the other neighboring, agricultural and farm-focused buildings just north of the Cotton Bowl. Luallen said the interest came from a “thriving organization that feels very appropriate” but wouldn’t say anything else until the City Council votes on the plan at its next meeting, on October 28. 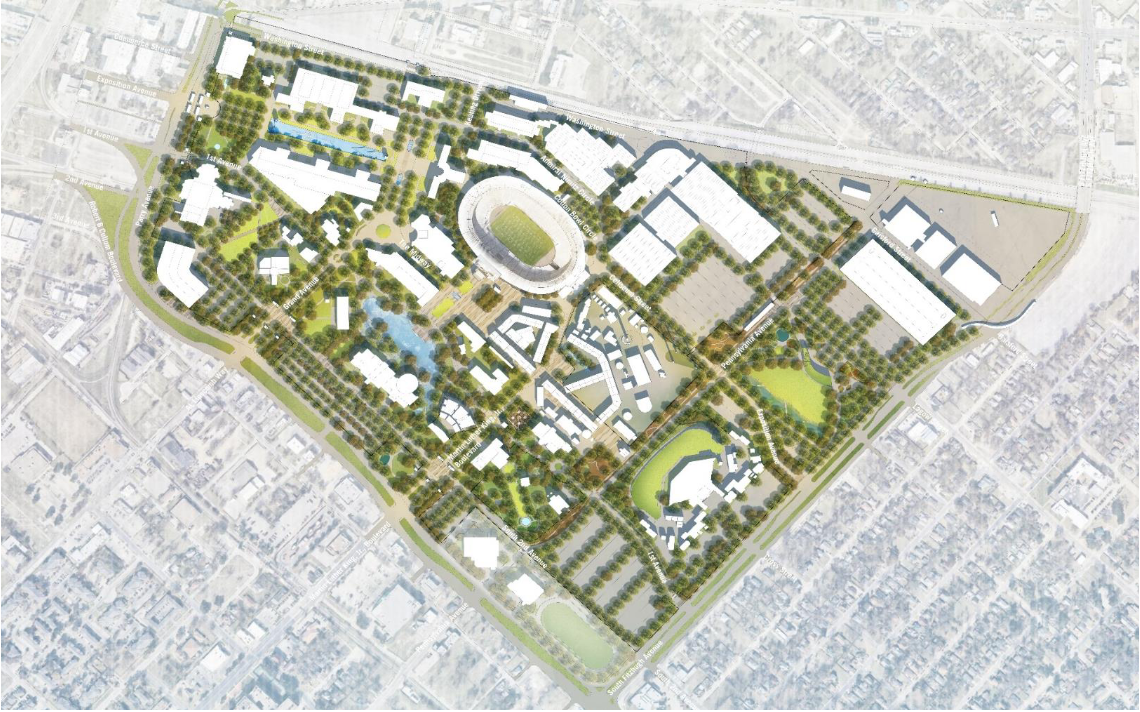 The vision for Fair Park.
Perkins & Will, Fair Park First

All of this feels like a wrap. Privatization was a contentious mess, with former Mayor Mike Rawlings trying to steer the deal to former Hunt Oil CEO Walt Humann. Humann was a man he trusted to get the job done quickly, and the decades prior generated numerous master plans for the property. The Park Board in 2016 refused to rush the vote, and eventually sent it back to the drawing board. That created a formal process to bid the operations out.

Spectra and Fair Park First won the deal over two other hopefuls, including Humann, largely because of Spectra’s scale. It’s an international company that has public-private partnerships similar to this one across the country. Fair Park First oversaw what Bazaldua described as a vigorous effort to hear from the community, whether that was in a living room or in a church sanctuary or in the Hall of State.

The councilman reminded his colleagues that hundreds of acres that now make up Fair Park were seized through eminent domain, displacing about 300 Black homeowners and creating distrust that lingered for generations. Bazaldua said he felt the groups understood that history and worked hard to bring the community along. “I have felt very confident through this process,” he said, “even as the trust had to be earned.”

Bazaldua said the success of the NHL’s Winter Classic, which attracted more than 85,000 people to the Cotton Bowl on New Year’s Day, cemented his confidence in Spectra’s operations. Now it’s time for Fair Park First to raise the money. And for the first time in many years, the people in charge all seem to believe that Fair Park’s future looks brighter — and greener.