The most interesting portion of Dallas ISD’s historic bond is a speck of the $3.7 billion it is asking for. Proposition A allocates $3.27 billion for fixing up many of its campuses, which are an average of 52 years old. Inside that is $41 million that will provide wraparound services to communities that need them, using data and community input to guide the investments.

Its funding mechanism—a bond approved by voters—is, by most accounts, a unique way to pay for such an option. Because it is a bond, the district is obligated to build something. There will be physical structures housing critical services that communities lack, whether that be healthy food or mental health services. It will start with four such structures that will operate in school feeder patterns in West Dallas, Pleasant Grove, South Dallas, and Oak Cliff. The determination of where to spend this bond money was based on something called a Community Resource Index.

We have written about this Community Resource Index before, but now we can look at the data that was used to formulate the index. You can play with the tool here: it draws a 2-mile radius around each of the schools and allows you to see how they stack up. What are the neighborhood’s graduation rates? Can you easily access childcare? What is the eviction rate? How many families are cost-burdened by what they pay in rent compared to what they earn? Uninsured rate? Incarceration rate? Which neighborhoods need the most help?

The bond designates $41 million to create community hubs in four feeder patterns: Spruce in Pleasant Grove, Lincoln in South Dallas, West Dallas’ Pinkston, and Oak Cliff’s Roosevelt, based on the stories the data tell. DISD will update its tool each year and the district is hopeful that increased investments will allow for more communities as the years go forward.

The district hopes this hard data will attract investment from nonprofits and other public agencies, like the city of Dallas, Dallas County, and DART. DISD chose these schools based on the Community Resource Index score and the age of its facilities, but also “the history of segregation and redlining in Dallas.”

“Although need exists across Dallas ISD, the Administration recognized that need is particularly acute in neighborhoods that have faced decades of disinvestment and unfair distribution of financial, educational, and material resources,” reads a report about the item. The goal is “to address myriad inequities that exist outside of school but impact students’ experiences in school.”

The thinking goes like this. Over time, federal, state, and local policies dug deeper holes for certain folks to climb out of in different parts of town. Cement plants and chemical factories and oil refineries were concentrated in West Dallas, and the city let its residents go without running water or paved streets into the 1950s and 1960s. In a remarkable swoop, the city seized land for Fair Park and eliminated generational wealth growth for residents in South Dallas. 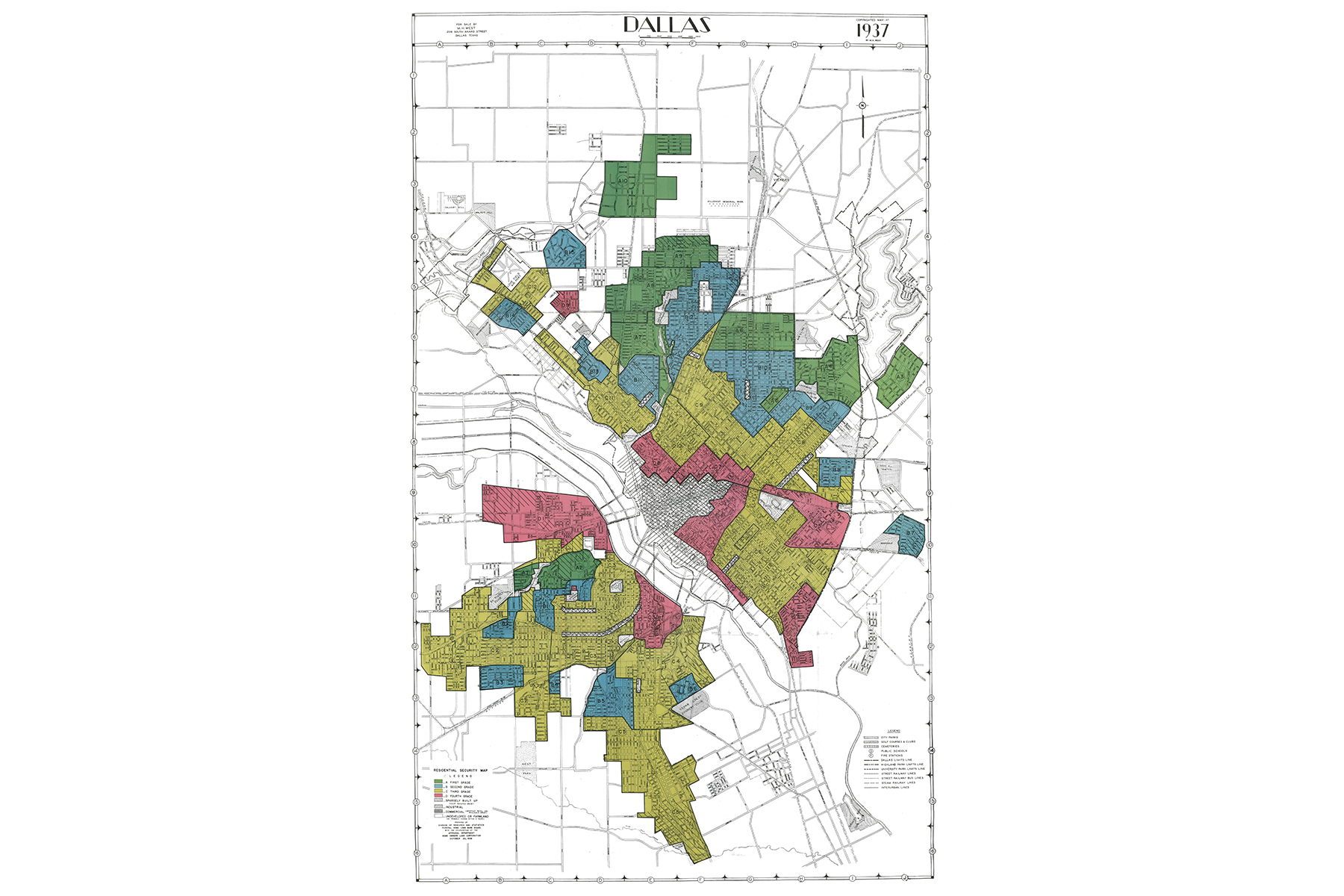 Color in The Lines: This 1937 map of Dallas illustrates federal home mortgage policies that effectively barred banks from granting loans in red-lined minority neighborhoods even when the applicants had equal or better credit than Whites in green-lined ones. Eighty years later, DISD’s equity bond program aims to address the damage done.

You can find these examples all over Dallas, in neighborhoods like Pleasant Grove and Oak Cliff. These issues affect kids because it affects their parents. And when kids don’t have sufficient resources—healthcare, after school programs, healthy food—learning becomes an obstacle. Dallas ISD is trying to reckon with all these things and use the bond to start the process of change.

With the help of its nonprofit research arm known as the Child Poverty Action Lab, or CPAL, DISD spent months creating data sets for the communities around each of its schools. It then compares them to one another to find which communities are most in need based on the data. It also solicited anecdotal testimony from residents.

The data show that these communities have lost out as a result of intentional policy-making, that city, state, and federal actions—all the way from granular local zoning decisions up to federal, nationwide redlining policies and the national highway system—have created a patchwork of haves and have nots. In Dallas, this hasn’t been sufficiently remedied.

For example, the residents who live in the 19.1-square-mile feeder pattern around H. Grady Spruce High School in Pleasant Grove have few health clinics, poor access to after-school programs, and are far below average in available recreation centers and libraries. Residents in the 5.2-square-mile zone for Lincoln High School in South Dallas lack grocery stores, mental health services, and job opportunities. Its ZIP code, 75215, is among the least employed in the city.

DISD wants to build additions to its schools that would provide the resources to change those things.

What will those programs look like? That will be decided after the bond passes, as will the actual physical location of the additions. But the options are fascinating: job training centers, mental health clinics, a restaurant with healthy food staffed by students, recreation centers.

A PDF lists what is possible. A vocational center estimated at $720,000. A childcare center at $200,000. Drop-in health clinic with exam rooms and a lobby for $225,000. Laundry and shower facilities for $75,000. This program is meant to bridge DISD with other service providers in the community, harnessing the trust that residents have in their neighborhood school.

“We recognize that schools are large institutions and play an outsize role in the health and vitality of a neighborhood,” says Jeff Hebert, a partner at HR&A Advisors, the consulting firm that organized the public input process. “Partnering to figure out how to have those services represented particularly as a site controlled by DISD is as much a part of the conversation as what DISD is doing itself.”

Councilman Jaime Resendez, who represents Pleasant Grove and the residents in the Spruce feeder pattern, told me he looks at this as a way to bridge public resources. He is from Pleasant Grove. “Anecdotally,” he told me, “just growing up, you know the areas that need as much attention as possible. To have a tool that uses so many indicators to show that need is great.” Now, the city can use the Community Resource Index to target its resources, like improving broadband access where it might be lacking.

Hebert worked on similar plans in California and Houston, where, in Gulfton on the southwest side, about eight partners offer tax help, a credit union, a business incubator, a farmers market, a water park, and a public park. That is a five-building campus on 4 acres and it’s listed as an example Lincoln could follow. It also cost $25 million, more than double what the bond would allot, signaling the need for partners.

There is still work to do. The district doesn’t yet know which school in the feeder pattern will contain the hubs. It is still finishing public input from community members near Pinkston and Roosevelt.

But using the Community Resource Index, the school district accepted the responsibility to highlight what communities need and produced the data to prove its case. Now the city, DART, and nonprofits can join with DISD to help make the changes that have been so badly needed.