The plan to allow a private development group to spend $10 million turning the century-old ballfield at Reverchon Park in Oak Lawn into a sports complex is likely dead. The deadline to sign the contract was Wednesday and the group, led by Dallas Mavericks general manager Donnie Nelson, did not follow through.

“Due to extreme disruptions in the professional sports and financial industries caused by the COVID pandemic, the contract was not able to be successfully executed,” wrote Parks Director John Jenkins in a memo to Council.

The proposal will have to be rescinded by the Park Board and City Council, a process that should be wrapped up during the next Council agenda meeting on October 14. According to John Lawrence, an assistant director with the Parks Department, the contract required the operating group to prove they had the cashflow to actually build the complex, which would’ve had seating for 3,500 people that could be expanded to 5,000 depending on the event. The city also required the group to provide signed agreements with any of the adjacent parking garage owners that would have been used by attendees.

“Those were the two deliverables required, neither of which the city received prior to the deadline,” Lawrence said.

This was an odd deal. The ballfield is tucked into the back corner of the 41-acre park. The diamond is a century-old relic that is still used despite the city’s significant lack of investment and maintenance. This was the second time the city had bid out redeveloping Reverchon’s aging ballfield, and it marks the second time the private operating groups balked. The first also couldn’t get the money it promised the City Council in 2018, when it won the bid.

Park Board President Calvert Collins-Bratton confirmed that Nelson’s Reverchon Park Sports and Entertainment LLC “was unable to complete its capital and parking agreements.” She, too, attributed it to the economic stressors brought forth by the pandemic.

Nelson’s group, which included Los Angeles Dodger and Highland Park native Clayton Kershaw, wanted a complete overhaul of about six acres that includes the ballfield. It would’ve had a turf field for soccer and rugby, and Kershaw’s foundation planned to build an all-abilities field closer to the chain link fence that separates Reverchon from Scottish Rite Hospital for Children.

The deal would have created a venue that could accommodate minor-league ballgames and concerts. The city would have owned it and Nelson’s group would have received a 20-year lease with the opportunity for 10-year extensions. The Dallas City Council eventually voted 11-4 in favor of pursuing the contract.

“I have a big family and I want families to stay in Dallas and build their lives and have entertainment options and educational opportunities. That’s why I ran,” says Councilman David Blewett, whose district is literally just east of Reverchon’s boundaries. “I wanted something right there, something inexpensive, you know? Take your kid, get a hot dog, it might cost you $50. How awesome is that? That’s the crime here. This could have been an asset if done right.”

Blewett originally voted against offering Nelson’s group the contract, believing he could get a better deal for the city. The first vote failed 7-7, but was recalled for a second vote. It then passed 11-4. Councilman Adam Medrano, whose district neighbors Blewett’s and includes Reverchon, was always a “no” vote.

He, like his former Park Board appointee Jesse Moreno, believed privatizing six acres of an open, 41-acre park was a bad idea. He says his constituents were against the deal for any number of reasons: noise, traffic, parking, and nerves over who would get to use the ballfield and when.

That ballfield is tragic. Blewett notes that it’s not level and the field doesn’t drain after rains. The bleachers are more than 50 years old. It is not compliant with the Americans with Disabilities Act. The bathrooms are out of date and the plumbing likely needs to be upgraded. On Thursday afternoon, a large Porta Potty sat outside the dugout while an amateur team stretched in the field. Medrano believed the park renovation didn’t have to be privatized.

“That was one of my arguments to them, we can do it another way,” he said. “I think the neighbors are excited about it. It’s going to be fun to rescind this contract.”

A group of neighbors even joined together to sue the city, arguing it didn’t follow public notice rules. There were two sparsely attended public meetings in the lead-up to the vote, one of which occurred prior to the first time the bid was issued, in 2017. This actually prompted the Park Board to pass a new public notice policy last month, which will require community input before the board moves forward with a formal request for proposals that would change the use of park land or privatize management of it.

“The Board wants to be sure any potential idea is vetted and supported by the public before any approval is given for an RFP,” says Collins-Bratton.

The neighbors also maintained it was a flat-out bad deal. They believed their property values would fall as a result of the congestion and noise, meaning less tax money for the city. They also believed the $30,000 the city would get each year from concessions was peanuts compared to the taxable value of the land, which sits at the edge of Oak Lawn and Uptown. 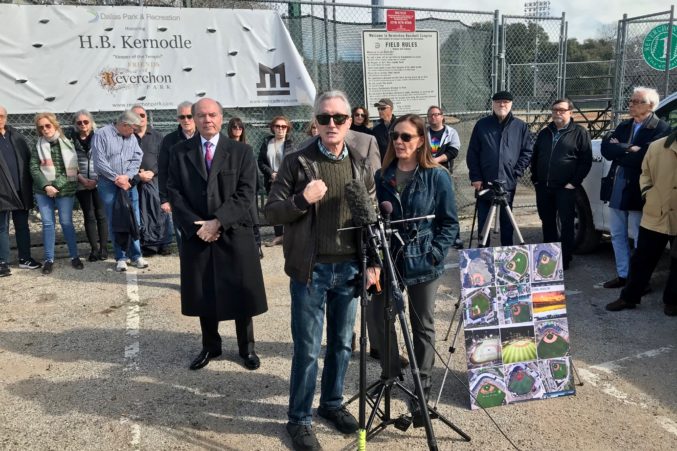 Robert and Charlotte Barner, plaintiffs in a case against the city’s deal to develop Reverchon ballpark, flanked by their lawyers and neighbors.
Shawn Shinneman

Tom Whelan, the attorney representing the plaintiffs, said the lawsuit will likely be dismissed once the bid is rescinded by the City Council. Collins-Bratton, the Park Board president, said, “I sincerely doubt a third RFP [Request For Proposals] will be issued.”

So what’s next? All parties are in agreement that the field is in bad shape. Nearby North Dallas High is shuttling its baseball team to the Texas Rangers’ Mercy Street facility in West Dallas because the field is in such disrepair. The Nelson bid had support from a bevy of parties: Dallas ISD, Friends of the Katy Trail, and Friends of Reverchon Park (which has had some curious, unexplained financial dealings of its own) all backed it.

But those neighbors didn’t want a stadium. They wanted a park. They still want a park.

“My clients and others are and have been working, and will be continuing to work, to raise funds to make a proposal to the city about an alternative restoration of the field that would preserve the existing use and availability to the public but improve the physical facilities so they are no longer in a state of disrepair,” Whelan says.

We don’t know how much that will cost. Conservative estimates come from folks like Jesse Moreno, Medrano’s former Park Board appointee who raised an early eyebrow to the project. He believes it’ll cost about $300,000 to restore the park: level the land, install new grass, add irrigation, replace the fence and the bleachers and the dugouts, and re-do the bathrooms. The neighbors in the lawsuit got an estimate from a firm that builds ballfields for private schools and found it to be around there.

Based on estimates from the new ballfield at Randall Park in Junius Heights, he estimates Reverchon’s needs will be somewhere between $250,000 and $300,000. (Randall’s was built from the ground up; Reverchon already has lights, for instance.)

Collins-Bratton believes $1 million is a conservative estimate. Other groups have it up to $5 million. Of course, the cost balloons with added amenities: new scoreboard, locker rooms, concession stand, all those things cost big money. The neighbors say they only want their field restored. The concern is that as amenities are added, so are maintenance costs. And as maintenance costs increase, so does the amount needed to offset those costs. As those rise, the park’s amenities become less accessible to the public.

What we do know: there exists at least $420,000 in old bond dollars, according to the city of Dallas. About $320,000 of that (not $200,000, as other outlets have reported) is earmarked for Reverchon from the 2006 bond. Blewett said he would give $100,000 of his discretional bond money for the improvements. The last bond, in 2017, did not include money for Reverchon’s ballfield. Moreno says neither staff nor community advocates raised concerns to Medrano’s office. “The need was not as great to the naked eye,” Moreno says.

That neighbor group, sources say, plans to raise $150,000 and offer it as a match to the city. Everyone seems to open to some variety of sponsorship revenue to help with maintenance.

That neighbor group will soon form a nonprofit called Restoring Reverchon Park Fund at the Dallas Foundation, according to Don Williams, the ex-Trammell Crow CEO who’s part of the group. It’s already secured gifts from 65 residents of the surrounding high rises. Williams said the neighbors would support the all abilities field if Kershaw still wanted to do it.

It appears the neighbors have won in this whacky back-and-forth of a beloved neighborhood park. The project is now back in the control of the city, so long as that contract gets rescinded by Council.