What’s with the murders?

Last weekend was horrible again. Four murders. Three in one night in one nightclub. At this point murder in Dallas is up 17 percent over the same date last year.

Murder has flared in other cities. We’re in the midst of a spiking national pandemic. Everybody is supposed to be scared and cautious. So why the murders?

There are two ways to approach that question. One is by looking at academic research, the other by talking to somebody on the street who knows.

Maybe our smartest cop — so smart we’re probably about to lose him to another city — is Maj. Malik Aziz. Aziz came up under David Kunkle, the chief of the Dallas Police Department from 2004 to 2010, the last chief in Dallas to truly understand and practice what is commonly called community policing.

I first met Aziz back in the day. He was helping sort out a racially tangled crime and policing issue in a historically Black neighborhood near Love Field Airport. This week when I went looking for him to talk about murder, I was afraid I might have missed him already: he had just been short-listed as one of three finalists for chief of police in Milwaukee, Wisconsin. That should give you an idea what kind of cred he carries nationally. Milwaukee? They’re going to be prit-tee careful, don’t we think?

But I caught him. He’s still here, at least for now. In agreeing to talk, he said pointedly he would speak to me not as a member of the Dallas Police Department but as recent past president of the National Black Police Association. Got it. Not DPD. NBPA. (Things are very weird, not to say dysfunctional, in the DPD right now.)

Aziz knows state of the art law national enforcement practice, and he knows Dallas. The first thing he said to me was that the murder spike, here and nationally, is real, not imagined. “Everywhere, people (in law enforcement) believe that this is a murder spike,” he says. “There’s nobody who has the delusion that we’re not in a spike.” 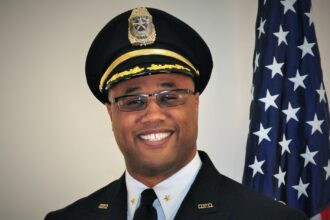 Aziz, who is Black, speaks about the current spike as an issue mainly in poor Black urban neighborhoods. The academic studies support him. On the one hand, he says the causes are broad. On the other, we spoke about something more specific called the “Ferguson effect” – murder spikes following major disruptions.

Ultimate causes, Aziz says, are as complex as society itself. “That is a dissertation. To get back to the very roots of violence, you’re looking at many variables that go into causation.”

He ticks off a litany of factors in what he characterizes as a vicious cycle – multi-generational poverty, bad schools, lack of economic opportunity, the lure of easy money. “Long before we see murder,” he says, “long before children get into the juvenile justice system, they are on their way to violence.”

But we also talked about a perception that murders and violence have increased immediately following major police violence controversies, from Ferguson in 2014 to George Floyd in 2020. As it happened, I had come across some academic research on that question before I spoke to Aziz.

In 2016, the National Institute of Justice in the U.S. Department of Justice published findings of a research project that looked at the relationship between flare-ups, uprisings and riots spurred by police shootings and subsequent spikes in the murder rate. Richard Rosenfield at the University of Missouri documented a statistically significant national uptick in murders in the year following the 2014 death of Michael Brown, Jr. in Ferguson, a suburb of St. Louis. That spike interrupted a long steep decline in the national murder rate going back almost 20 years.

In the 56 cities Rosenfield measured nationwide, there was a good deal of variation. In 40 cities there were increases in the murder rate in the year after Ferguson, and in 16 there were decreases or no change. Increases of more than 25 percent occurred in 18 cities. In 12 cities, the increase was more than 50 percent.

Sam Dotson, then the St. Louis Police Commissioner, labeled the phenomenon the “Ferguson effect,” which he said was caused by criminals becoming “empowered” by rioting. But pinning down a provable cause for the Ferguson effect has been tricky, Rosenfield says in his paper.

I guess we all think of former FBI director James Comey by now as the man who got Trump elected by giving credence, then taking it away from, the Hillary Clinton email story. We may have forgotten his earlier role at a national policing conference where Comey blamed the Ferguson effect on what he called “de-policing.”

De-policing, a clunky euphemism for what used to be called blue flu, is sort of the other side of the Dotson theory of empowered criminals. De-policing is about cops getting disempowered, slowing down their efforts because they feel discouraged. Comey told the conference that such a slow-down by police was the real reason for the murder spikes.

Both versions, disempowered cops and empowered bad guys, implicitly reinforce the idea that only rigorous law enforcement stops Black people in poor urban neighborhoods from killing more of each other in the first place. In his paper, Rosenfield doesn’t try to directly shoot down either one, because how can he? They’re both just hunches anyway. He does present data, meanwhile, to confirm that the Ferguson effect is real and that it is primarily a factor in urban Black communities.

But Rosenfield also presents other earlier academic studies showing that Black people in poor neighborhoods have far less faith in law enforcement, even without a Ferguson. Multiple studies have shown that poor Black people think calling White cops to a scene of trouble will only bring worse trouble. The cops won’t listen, won’t be able to tell bad guys from good guys, will get scared and start shooting people before they know what’s going on.

“What matters is not the factual accuracy of these beliefs in every instance,” Rosenfield writes. “What matters is that they can metastasize into a pronounced ‘legal cynicism,’ especially in disadvantaged African American communities.”

Rosenfield cites research by others establishing a direct correlation between legal cynicism and crime: “When people believe the procedures of formal social control are unjust, they are less likely to obey the law.”

If they feel that way already, he says, those feelings may be sharply exacerbated by, “widely publicized incidents of police use of force that seem to confirm the validity of the underlying belief system.”

I asked Aziz about all that. He said he believes the Ferguson effect is real: “It can be the Ferguson effect, the Baltimore effect. Every time something comes up, we have all kinds of academicians giving names to these different things, but there is a very real truth to it.”

Aziz says the way poor Black people view police – or the way any of us view them — is always going to be part and parcel of how we view the overall society. “Because the police are what?” he asks. “The police are the most visible form of our democracy in action.”

I asked him what he would say to the person who thinks the only way to counteract the Ferguson effect is with a tougher crackdown.

“You will never arrest your way out of any crime problem,” he says. “It won’t happen. It never has happened, and it never will.”

I asked him what he would say to the person who lives in a safe neighborhood and believes that containment is the answer. Wall it off, keep it on the Black side of town, then who cares?

Safety for us all, Aziz tells me, is in wholeness, shared responsibility and trust for us all. “You should want, in a very human way, not some utilitarian way, for your brother and your sister what you want for yourself,” he says. “We have a family in Dallas. If we want a vibrant progressive city, we are going to have to do it together.”

And we would let this guy get away to Milwaukee why?