I’m old. My only “kid” is 34 years old. But I certainly remember days when he was an extremely lively little boy whose every fiber of being was devoted to getting out from under us, outdoors, with his friends and into some kind of thing. So I wonder and I marvel and I ache inside for parents and teachers now trying to keep small children parked in front of screens for hours at a time as a means of education.

We all know it must be done. We admire all the adults trying to make it work. But the whole exercise also feels like a kind of crime against nature.

There is hope. Recently I came across Kerol Harrod, the children’s librarian at the Emily Fowler Central Library in Denton and an instructor in the Texas Woman’s University School of Library and Information Studies. He’s a guy who can spiel off every academic educational term in the book, things like print motivation, dialogic interaction, social learning theory. But he’s also a hoofer, a singer, and a comedian.

I found him online. I was searching around for people using theater, music, and puppetry to overcome some of the educational challenges of the COVID era. The article I found was about a series of virtual story times for young children that Harrod has done through the Denton Public Library. We spoke on the phone.

“I have a background in film, entertainment and performance,” he says. “In terms of holding children’s attention, a lot of it in my mind is sort of almost like a Vaudeville show. You have lots of things you’re doing along the way. You’re doing a song, and then you’re doing some sort of movement, then you’ve got some kind of props. You have the puppets come out.

“Then you read a book. You’re cycling through all this stuff, so that about the time you have a commercial break somewhere, you just switch gears.”

I have a family connection to the world of puppetry, which can be its own strange venue (obviously), but those connections also have made me aware of puppeteers around the country doing really intriguing things during a crisis in the field of early childhood education.

The Dallas Independent School District tells me it is developing curricula using the principles I’m talking about here – theater, art, entertainment – and it hopes to bring those elements online soon. The people I am quoting here are folks I found or already had met, but just about everybody in education already knows this stuff. None of this is breaking news. I thought talking about it might offer some small solace to parents who must be wondering about now if early childhood education is just dead.

Geoffrey Cormier of Charleston, South Carolina, is internationally known for his work in the ancient art of shadow puppetry. He speaks fluently about the role of shadows in the 17,000-year-old Lascaux cave paintings in France, Plato’s allegory of the cave, and about the art of shadow play in 19th century Bohemian Paris. But right now he’s working on shadow puppetry for six-year-olds.

When I reached him, Cormier told me he had received a call from a teacher friend in another part of the country, a person familiar with his work, who was basically making a desperate cry for help.

“She is absolutely dying,” he says. “She’s treading water. She has about 25 kids in her class. They are all sitting in Plexiglas cubicles. She has another 25 kids that are all remote from home.”

He says her whole school system is in a quandary. “They are trying to figure out, ‘How do we entertain, how do we keep their attention remotely or in these cubicles where they are sitting strangely divided like hamsters in cages?’”

His own challenge is that his friend’s school system wants him to produce four unique programs that are about an hour and a half each. Cormier is accustomed to creating shows no longer than 12 minutes. He is mixing up a combination of pre-filmed shadow puppet performances, a pre-recorded tour of his studio, and a live session where kids can ask him questions.

He will also do what he calls an empowerment workshop about things kids may think they can’t do, like draw. “First draw a circle. It doesn’t matter if it’s round or perfect. Draw a square. Draw four lines coming off that. There, you have a cat. Anybody can do that,” he says. “Then cut it out and cut it into pieces and tape popsicle sticks or straws to it, and there you have a moving shadow puppet.”

Dave English, another puppeteer I know, uses puppetry as a means of reaching and teaching homeless kids. English, an accomplished marionette-maker, performer, writer, and filmmaker in Pittsburgh, Pennsylvania, uses simple modeling clay and a line of patter for this work. 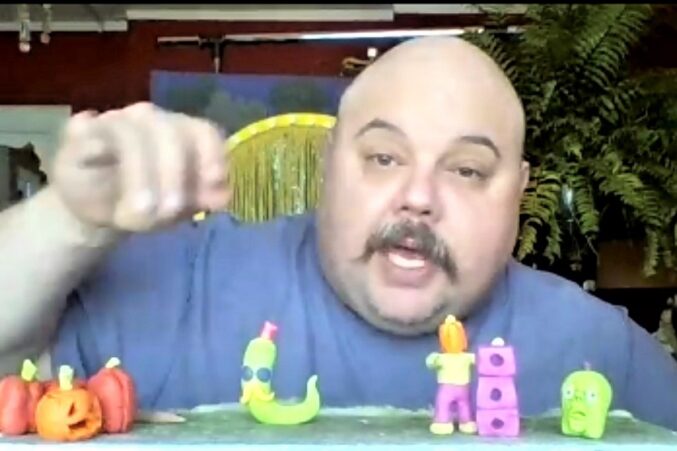 Working through the Homeless Children’s Education Fund of Pittsburgh, English does both group and one-on-one sessions: “So the kid might be logging in on a cell phone,” he says. “They might be coming in on a Kindle or a device from school.

“We have to figure out which device they have, if it works, how it works, how we can get it connected so they can participate. Then they have a box of materials they have received from Homeless Children’s Education Fund.”

In a typical session of an hour, he sits at his bench in his studio in the Polish Hill district of Pittsburgh with gobs of modeling clay before him. Wherever the kid is, at a shelter or a one-night stay at somebody’s house, she or he has matching gobs of clay.

Maybe the lesson of the day is about the alphabet. But to some extent, English says, he must roll with the kid. “You can’t kick them out of class,” he says.

Harrod, Cormier, and English all tell me they think art and theater can greatly inform virtual instruction, but all three say professional educators must be the centerpiece. They agree that all good teachers are performers anyway, and they say teachers today work under pressures that must be seen to be believed.

English tells me that he receives professional development training all the time from the professional educators, and that some of it is especially valuable.  For example, he has been trained in an area called trauma-informed instruction. An artist, he says, doesn’t necessarily know what to expect or how to deal with kids whose lives are unrelentingly traumatic.

I asked him what toll it takes on his own heart to be peering into the very tough lives of little kids every day. “It’s a mix,” he says. “When you’re seeing them enjoying it and they tell you they miss you and they thank you and say goodbye, it’s really gratifying. That’s legitimately good for your health.

“The negative stress of what’s going on in the news, the country, politics, everything, the pandemic, it all takes a physical toll on people. I’ve noticed the good vibe of helping kids is somewhat restorative.”

He told me about one little boy: “He let me know in our last session, ‘I can’t work on alphabet stuff today. I just want to make clay creatures.’ He told this lengthy complicated story using big multi-syllable words about tacos and how he likes tacos. So we made clay tacos.

“He was talking to me on a screen. He had another computer that was given to him by his school. He wanted me to watch him do his school work. So he took my face and aimed it at the other computer screen and worked on it. I was like, ‘Well, OK, if you want to do that work, I think that’s really great. I think that’s really smart of you. Do you want me to leave you alone?’

“He said ‘No, no, are you still there?’ He said he wanted to teach me what he was learning in school. It was an emotional need to have a buddy. So for the last 40 minutes of my time with him, I sat there quietly watching a screen of him looking at another screen.”