No very visible organized opposition to next month’s Dallas public school bond election has shown up, but a two-part, vote-no argument is bubbling along beneath the surface on social media. The first part argues that, even though voters have authorized big bond issues in the recent past, the Dallas Independent School District still has too many lousy buildings.

The second argument is that something crooked is going on with the bond money and the proof is Thomas Jefferson High School in northwest Dallas, still battered and unrestored a year after it was devastated by a string of tornadoes.

The first argument — too much money spent already, too many bad buildings left — is the easy one. DISD is a city unto itself, with more than 150,000 students and 20,000 staff. Its wants and physical deficiencies are indeed staggering, with almost $6 billion in unmet needs in the physical plant alone.

The proposed bond for Dallas is the biggest ever — $3.7 billion. But on a per-student basis, this year’s bond proposal in San Antonio — not a rich city — is 12 percent more than what Dallas is asking its voters to approve. A bond approved in the affluent Highland Park school district five years ago was 131 percent more per student.

People opposed to the Dallas bond may argue that DISD still has a lot of bad buildings, but the people in favor of the bond are saying the same thing. So fix them. And the thing the crazy Texas Legislature stuck on the ballot in all caps saying it’s a tax hike is flat not true. Nobody’s taxes go up when this passes.

The piece I personally am more drawn to, however, is the charge of corruption and conspiracy, because — I just am. And I didn’t get why Thomas Jefferson was still a fly-blown hulk when I thought the district had said it was putting TJ on some kind of super speeded-up fix-erator program that I never really understood. We’re a year away from the tornado, and, if anything, TJ looks like it got hit by another tornado.

So I have been asking around. Most of the people I talked to — with one notable and very welcome exception — would only talk to me on a not-for-attribution basis, meaning I can say what they told me, but I can’t name them. And I think when we get into it, you will see why they’re so goosey.

The exception is Dominique Alexander, head of Next Generation Action Network and the public face of the Black Lives Matter movement in Dallas. Alexander tells me he helped broker a deal early on in the Thomas Jefferson reconstruction process by which the general contractor, a big company, agreed to include a certain minority subcontractor Alexander wanted to help. “Those people met in my office,” he says.

As far as Alexander was concerned, the meeting in his office had defused any political landmines still lurking in the TJ contract. But then somebody overturned his apple cart. 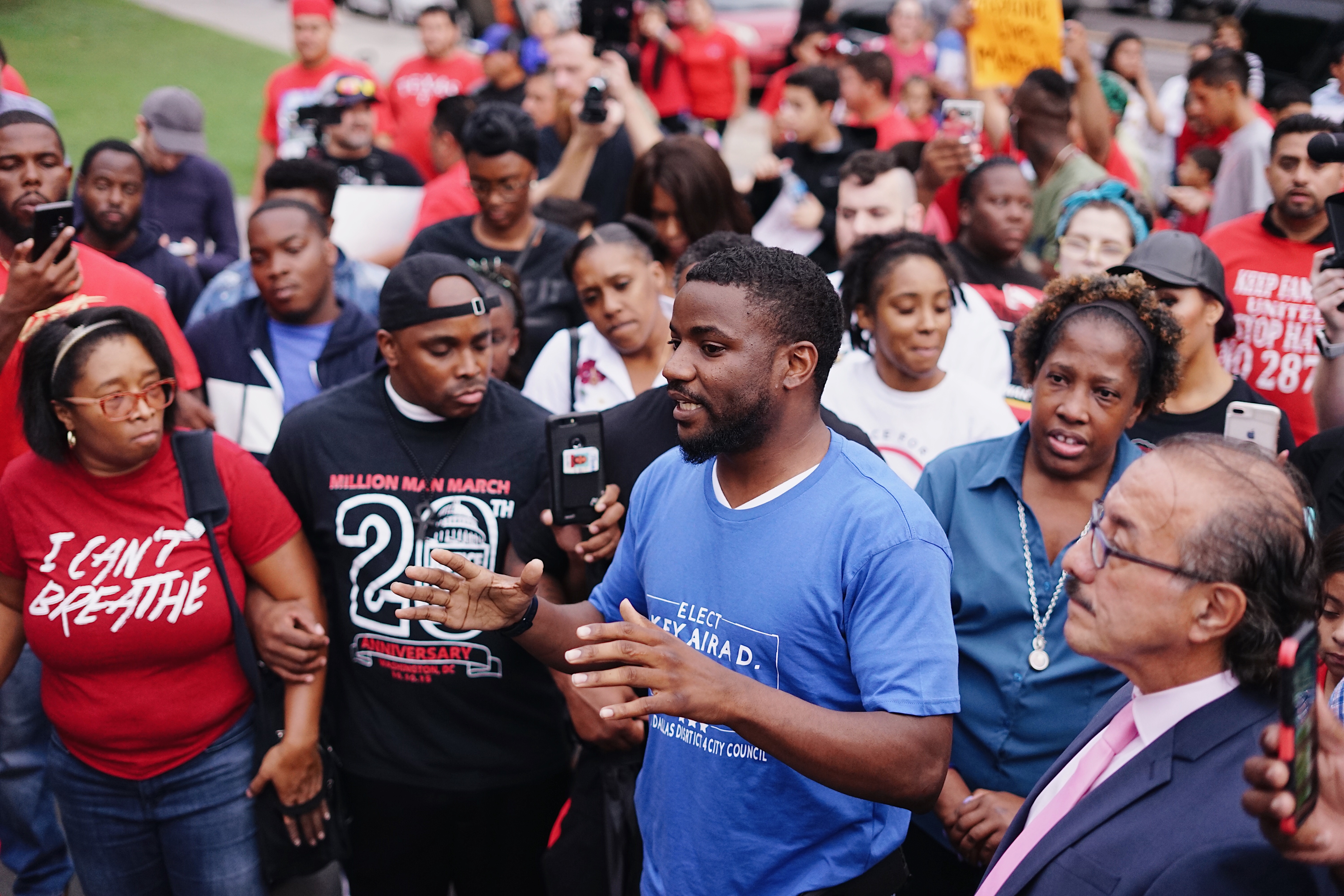 Dominique Alexander, wearing the blue shirt, stands among about 150 people who gathered along Lamar Street—near the Dallas Police headquarters and the apartment complex where 26-year-old Botham Jean was shot dead inside his unit by a Dallas cop—to protest police brutality on September 10, 2018. (Photo Credit: Creagh Cross)

“Thomas Jefferson had been resolved for, like, three weeks, right? So we get a call stating that they [the school board] are putting it back on the agenda [for the next board meeting],” he says.

Now I have to switch over to the other side of the dial, to the people who don’t want to be named. They tell me that Alexander’s involvement and the pressure brought to bear on behalf of one minority contractor was not a one-off. It was part and parcel of an entire pattern of business.

And here we come to a fragile seam in the story that depends a lot on point of view. To many conservative Whites, minority set-asides and the politics behind them all look like a racial scam. But to many minorities, the Dallas Country Club and pretty much the whole Park Cities look like the same kind of scam, only for rich White people. So at least on moral grounds we wind up with a my-scam, your-scam type of a deal.

It is true, from what both sides tell me, that the TJ contract could have been stitched up and sent out the door and work begun when Alexander says. It is true that the whole thing was stopped last August; the existing contract was ended; an entire new process was initiated; and the contract was awarded to a new company at that point. The entire school board, save one member, voted for the change.

Folks cannot be blamed, really, for smelling a rat. The school board refused not merely to explain why they had done it. They wouldn’t even really say what they had done. They said they ended the contract “for convenience,” which sounds weird, like some English aristocrat telling you, “such things happen.”

As it happens, the snotty-sounding phrase, for convenience, is very important and maybe the heart of the matter. It’s a legal term.

A contract can be ended “for cause,” meaning somebody did something wrong. Or the contract may be written, as this one was, to include trigger points where it can be ended “for convenience.” At those points, the client, in this case the school district, has the option of saying, “We have a right to end it right here if we feel like it, and we feel like it. We intend to go with someone else.”

The “for convenience” thing is written into contracts, I am informed, as an incentive. Keep us happy, or we will end it at the next trigger point, for convenience. I had never heard of it before, but I can see how it works. If there had been such a thing in my marriage vows, I’m sure I would have been a lot quicker about the chores.

When the school board ended the original TJ contract, it opted for an entire new way of letting the contract, different from the old way in a number of respects but especially notable here for one difference: the new system, unlike the old one, does not include a formal minority contracting point-scoring system.

Now, I got a lot of schmoozing from people about this change. At least one person urged me to believe that taking away the scoring system in no way diminishes the district’s general moral commitment to minority participation. Alexander, however, doesn’t see it that way. Nor do I.

A general moral commitment to minority participation is fine, but it is not the same thing as a hard requirement that assigns extra points to a proposal in a competitive public bidding process for the number of minority contractors included in the job.

The first reason everyone on the other side from Alexander wants to hide their names, I think, is that they agree with me. In fact they agree with Alexander. That’s exactly what they wanted to do — kill the point system to clean up the process. But they don’t want to say that out loud (more on that in a moment).

This is quite remarkable. Almost the entire school board, including women and minority members, voted to ditch the old system, at least for TJ, and undertake a new one that clearly de-emphasizes minority contracting. They did this because they were tired of the my-scam, your-scam way of doing business.

One board member tells me the board can scour these contracts and see where the money is getting puffed up to pay for everybody Alexander wants in on the deal. I don’t know if that’s true. But I think it’s what a lot of board members think. And Alexander is candid and blunt. There are people he wants in, and he will help them, if he can.

How? Well, this takes me to my most recent lesson in humility. Last September I wrote several pieces here about Black Lives Matter demonstrations in the Park Cities, one of which was a march Alexander led at the home of Fred Perpall. Alexander told me at the time he chose Perpall because Perpall is chairman of the elite Dallas Citizens Council, which I was sort of tickled by, because — elite.

Once the TJ deal had been laid out for me, however, I gained another somewhat different possible perspective on the march at Perpall’s house. When the TJ contract was taken away from the original contractor in August, it was awarded to the close second-place runner-up in the original bidding process, the Beck Group. Alexander’s challenge now — and I don’t know where this stands — is to get Beck to include the minority contractor whose cause Alexander was championing originally. The CEO of Beck is Fred Perpall.

This is the second part of why the school board has been so shut-mouth and people are reluctant to stick their heads up above the ramparts. Give Alexander his due. He is a force to be reckoned with.

Since what tickles me does not always turn out to be the truth, I will keep my opinions to myself about good guys and bad guys. Maybe this story does not really divide up that way. But as far as TJ and the bond election go, we can know a few important things for sure.

Killing the TJ contract and switching to Beck and the new process was politically risky for the board. But the switch-up was not evidence of corruption. It was evidence of integrity.