Enjoy unlimited access to all of our incredible journalism, in print and digital.
Subscribe Now
Advertisement
Covid-19

Last night at the Eldorado Country Club in McKinney was a great place to get sick. The Golden Corridor Republican Women and the Collin County Republican Party hosted an event called “Thinning the Blue Line.” It was billed this way: “Moderated by Texas State Senator Angela Paxton, local law enforcement answer everything you want to know about public safety and/or policing but are afraid to ask.” Judging from social media, no one at the event seemed concerned about one aspect of public safety over which they have direct control: their own respiration and its ability to spread a deadly virus. I don’t see a single mask.

Yesterday, Collin County reported 187 new coronavirus cases and two deaths. The county is approaching the infection level it saw back in July. Also, the president of the United States early this morning revealed that he and the first lady have it.

UPDATE (10/5/20) The event planner who posted the pics to Twitter has deleted her tweet. Here’s a screen shot: 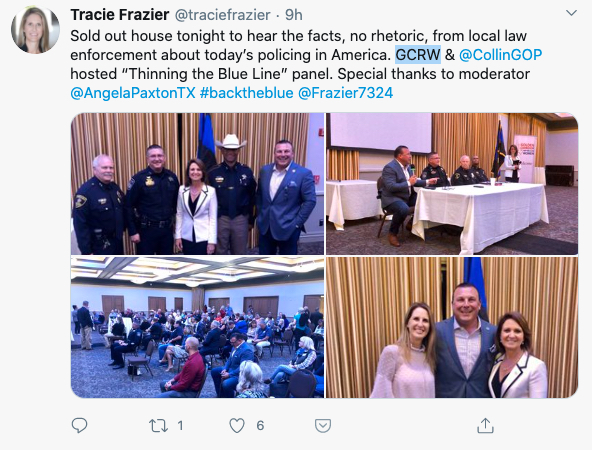 Dallas’ most important news stories of the week, delivered to your inbox each Sunday.
Golden Corridor Republican Women

The CDC has made boosters available to 16 and 17 year olds. 60 percent of the U.S. is now vaccinated.
By Catherine Rosas
D Magazine Directories