For having three weeks to vote, a lot of folks decided to show up on the first day anyway.

I’m usually the third early voter at my location in Fort Worth. Even for city council, school board or simple bond or ballot propositions, I’m there. My election judge jokes she can’t start an election without me. Even as COVID-19 spread this summer, I was there. Only thing new was my mask.

While I’m used to waiting a few minutes during presidential election years, I wasn’t prepared Monday morning to see a mile-long line around the John Peter Smith Viola Pitts Clinic.

Yet like much of this year—Friday happy hours, weekly lunches with my father, my Christmas party—my routine was upended. I decided after a few minutes of serious deliberation not to vote on the first day of early voting. But Mark Meeks, one of my fellow first- things-first voters, was not letting the long line stop him. He wasn’t alone. Tarrant County clocked 42,428 early voters on Tuesday, a hair behind the 43,140 that voted in 2016.

“I’m not worried about coming,” he said, holding an oxygen tank. He has chronic obstructive pulmonary disease, putting him at high risk for COVID-19. “But I have my oxygen. Plus, it’s fun to vote.”

Dallas, I saw, was no different. Except it set a new early voting record, with nearly 60,000 voters casting their ballot, about a thousand more than the previous record set in 2016.

Tyler Hazlewood was among them, and among the first in the county to vote at the American Airlines Center. He was in and out in 20 minutes, a remarkably short time compared to other sites that ballooned to nearly three hours. And this one was where Mark Cuban showed up to vote. It was the first time the American Airlines Center had been used as a so-called “mega center” for voting.

“It was very encouraging to see such a great turnout the first day of voting,” he said. “It was also so great to see a beautiful facility opened up to get the vote out and the staff did it super efficiently.”

He thanked the Mavericks’ owner for his work “to bring integrity back into The White House by endorsing Vice President Biden.” Cuban was in line around noon himself.

C.d. Kirven, a Dallas activist, voted at the Duncanville Library. Waiting in line was not an issue.

“This is one of the most important elections in American history. Our very democracy is at stake,” she said. “Like other Texans and Americans who waited hours in line to vote, we are determined to not only uphold our right to protest our government’s apparent indifference to our demands that they act in our nation’s interest but we are willing to do whatever it takes to make sure those demands are enacted. We have a chance to turn Texas blue that alone is worth the wait.”

She added she hopes former U.S. Rep. Beto O’Rourke runs for governor in 2022. She’d stand in line again to cast that ballot, she said.

The Oak Cliff Sub-Courthouse was where the party was—if a party means standing in line for two hours. But you’d at least be witness to a wedding. (And a person who fainted.)

Voters were already wrapped around the building before the sun was up. Clyde Greenhouse was the first to check in on Facebook: “We’re typically in and out in 10 minutes or less on the first day of early voting! Socially distanced line wrapped completely around building when we arrived at 6:45AM!” 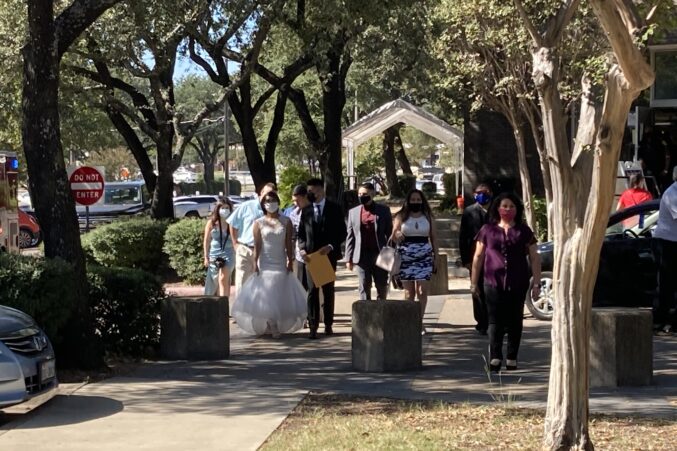 A couple got married outside the Oak Cliff Sub Courthouse on the first day of Early Voting.
James Russell

The voters kept lining up. But the other duties of county government didn’t stop. A man and woman arrived, dressed in their tuxedo and dress, to get married. Voters cheered when the couple and their witnesses walked out. (They didn’t speak English and declined to give their names for this story.) Dallas Fire Rescue arrived, shuffling in with a stretcher and out with a patient. Afterward, things got less exciting as the line sped up.

Voting on the first day of the early voting period is Cristin Padgett’s routine, though she admitted “3 p.m. may not be early.” That’s when she left her office and made the eight-minute trek to the Alfred J. Loos Sports Complex in Addison.

She was back at her office 30 minutes later. The process was fast and efficient.

When Danielle Snailer of Arlington heard I bailed after seeing the long line, she confessed she did too.

“I walked away but I’m planning to come back. I’ll come back every single day if I have to! Like Robert Reich says: If your vote didn’t count, they wouldn’t be trying so hard to suppress it. I will vote this election!”

You have three weeks to do so. Let’s hope the same energy carries on through October 30.

Your Chance to ‘Gram Your Early Voting Experience Ends Today