The polls are open across Dallas-Fort Worth.

From now until October 30, you can vote between 7 a.m. to 7 p.m. on weekdays and Saturdays or from 1 p.m. to 6 p.m. on Sundays. If you’re in line by closing time, you’ll be able to vote. Early turnout appears huge across the city: lines immediately wrapped around the University Park United Methodist Church in the Park Cities, the Martin Luther King Jr. Community Center in South Dallas, the Oak Lawn Branch Library, and the Lochwood Branch Library, among many others. A steady stream of voters queued up outside the American Airlines Center, the first time the stadium has served as a polling location. Hundreds of voters at Redeemer Lutheran Church on Park Lane are formed into a serpentine line that has taken over the soccer field. 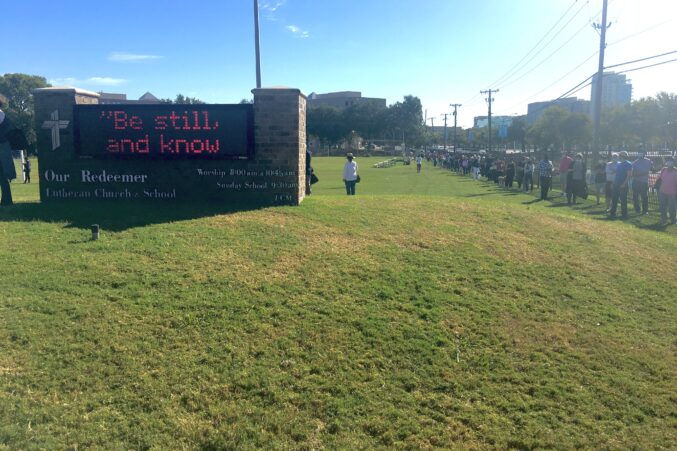 The line at Our Redeemer at around 10 a.m. on the first day of early voting.
Bret Redman

You’ll have more days to vote this year. Gov. Greg Abbott extended early voting by six days to accommodate the new safety measures brought forth by the pandemic. You’ll be able to vote with a government-issued ID, and you can vote at any polling location during early voting in the county in which you’re registered. (Here are the seven types that are accepted. If you don’t have one of those, you’ll need to sign a sworn statement and produce a certified birth certificate, a voter registration certificate, a utility bill, a paycheck, or a government document with your name on it. If you don’t have those, you can cast a provisional ballot but you need to bring government ID to the county registrar within six days of the election.)

Wear your mask and expect to pass by a sanitation station before casting your ballot. Dallas County voters will use a stylus to make selections and poll workers will be masked and seated behind a protective shield at the check-ins.

They’re doing all they can to ensure safety. Here are Dallas County’s health protocols; the lines will all be managed to ensure proper social distancing protocols, so don’t be scared off if you pull up and find a lot of people waiting to go in. People are excited to vote. If you’re wanting to avoid the crowds, wait a few days and monitor the status on the county’s website.

Expect a solid turnout. The Texas Secretary of State released new enrollment numbers on Monday that showed 16.9 million registered voters across the state, a jump of 300,000 since its last update on September 22. That’s a 12 percent jump since 2016, about 1.8 million new voters, and the state is still processing late applications—we could have 2 million more voters on the rolls by November 3.