When the Dallas City Council votes this afternoon on the budget for the 2020-2021 fiscal year, it will consider giving the police department an additional $8 million over what the department spent this year. The Council will also vote on nearly $30 million of infrastructure improvements, expanded mental health services, housing, and employment programs that the city manager has said were prioritized after protesters spent months marching through the streets after the killing of George Floyd.

For many activists, this budget doesn’t go far enough. They want millions taken from the police department and spread out to other services in the city to help lift up neighborhoods where jobs are lacking, streets are crumbling, and amenities don’t match what’s available in the more affluent corners of Dallas. To them, the disparity in money allocated to the police budget — which, at a proposed $509 million after cutting overtime by $7 million, is about a third of the entire general fund spend — and most other services is so significant that it requires reallocation.

Many on Council, however, believe this budget is a compromise between the conflicting priorities of activists and other constituents who they say list public safety as their top concern during a second straight year of violent crime increases.

“There will hopefully be a point in time when there isn’t as much need in the normal residents’ eyes for law enforcement, but right now that’s just not the case when you knock on the average resident’s door,” says Councilman Adam Bazaldua, who represents South Dallas and Fair Park. “I do believe this is somewhat of a middle ground.”

Those activists have made their voices heard beyond their calls from the streets. They are organized. Hundreds have spoken during the public comment portion of Council meetings, urging their representatives to consider drastic cuts to the police department. They have sent emails and produced well-researched reports.

Our City Our Future, a group of activists that has organized a groundswell of support for defunding police, surveyed more than 700 residents from each of the 14 council districts to get input on where they’d like to see investments. They then dug into the budget, identifying $200 million in police funding that could be reallocated to other public services. The report details how that divestment could work. In Defense of Black Lives, another activist coalition that shares the platform of defunding the police, has a similar report. Neither group’s divestment strategies made it into a budget amendment.

Their calls for reform include changes to policing. They believe police often escalate situations and put Black and Brown Dallasites at risk. They believe that not every 911 call requires a police officer. They want to stop criminalizing poverty (e.g., there’s an ordinance against sleeping outside, although the district attorney has refused to prosecute). They want money from the police department to address the root causes of those problems, to reduce criminality by boosting services.

“A big thing with investing in the community is understanding the help people need. … If we can combat these issues at their core, we’re not going to be faced with so much violence,” says Jodi Voice Yellowfish, an organizing member of Our City Our Future. “These are conversations people don’t want to have.”

Activists like her found a City Council that was publicly sympathetic but also unwilling to make such sweeping budgetary changes. Mercedes Fulbright, an organizer with the groups In Defense of Black Lives and the Texas Working Families Party, says they were able to get “four or five” council members to express their support for rethinking police funding. But that is well short of the eight votes they would need to pass an amendment to the budget.

“Many of our champions, especially at the beginning of this fight, absolutely believed in the need to divest and reallocate that money in ways that actually prevent the violence and crime we’re experiencing,” she said. “But with them being the minority in that ideology and that vote, it makes it hard because it’s forcing them to be isolated and be on an island by themselves in ways that compromise their abilities to push other progressive needs.” 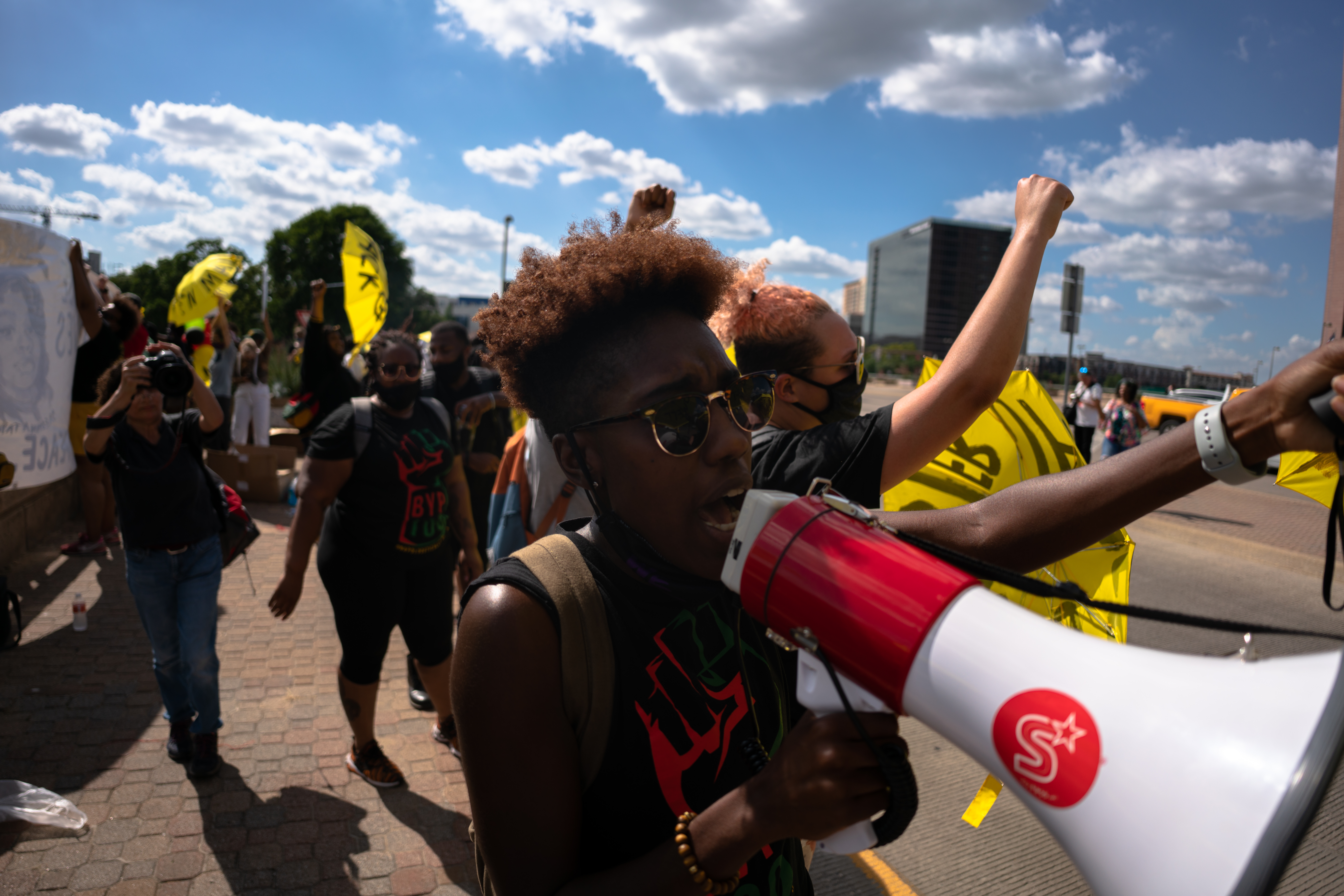 This has been a particularly contentious budget season, but not because of a dissenting voting bloc that supported activists’ calls to defund the police department—or even because of a revenue drop in the wake of the COVID-19 pandemic. Instead, Mayor Eric Johnson isolated himself from a majority of Council after trying to cut staff salaries by $6 million to fund some of his own public safety and infrastructure priorities.

Bazaldua sponsored the competing amendment, which instead funded similar measures with $7 million taken from the $24 million police spend on overtime. This incensed the mayor, who cited a second year of record murders — which are on pace to be the most in 13 years — and a 28 percent increase in aggravated assaults not related to family violence. (The mayor lost his vote twice.)

“I’m even hesitant they’re going to defund the overtime,” Fulbright says. “At this point, it’s, like, give us crumbs.”

On Friday, Bazaldua changed his amendment to put all of those savings back into public safety measures, including some adjacent initiatives like code enforcement. It’s the first major step the City Council has taken to address the shortfalls identified in a costly study of the police department that consultant KPMG completed in 2018. Bazaldua’s amendment uses nearly $4 million to hire 95 new civilian employees who will take over desk jobs that are currently occupied by 95 sworn officers.

KPMG recommended that 18 percent of the department be staffed with civilians, which would free up police officers to return to patrol. It also includes more money for fixes identified by the mayor’s Task Force on Safe Communities, adding $1.5 million to improved lighting and $300,000 for community violence interrupters who would be hired to help mitigate violence before it happens. Another $750,000 would go to addressing illegal dumping while $600,000 will “address the drivers of poverty.”

“I think all of those items are going to specifically speak to public safety initiatives and hopefully will make more sense to the public that our focus is on being more efficient while continuing to reimagine public safety,” Bazaldua said. “We’re going to have to be OK with incremental change because I believe the type of incremental change we’re seeing now is pretty monumental.”

Last year, as the city dealt with a similar rash of violent crime and a smaller police force, the City Council was all roses about giving the DPD more money. Officers got salary raises that competed with departments in the suburbs, which pay more and don’t have such problems with poverty — the very root cause that activists are calling to be addressed. The same activists that are pushing for changes now were pushing for changes then, but thousands hadn’t taken to the streets in the same way they did over the past three months.

“The Council, we were new, we really did not dig in too much” to the police budget, says Councilman Chad West, who represents North Oak Cliff. “There were some cuts and recommendations made, but DPD’s budget was not a huge focus last year because everybody was screaming for staffing levels to go up because we were so behind on that. So the focus was ‘Let’s give DPD what they need to be successful and make that happen.’ DPD had a lot of opportunity to use that and become successful and run with that. But it’s been a year and now we’re digging in.”

They’ll have to dig in more next year. This year, the city was bailed out with federal funds that paid for city staffers whose jobs suddenly required them to respond to the coronavirus. Commercial property taxes buoyed revenue. But next year, Chief Financial Officer Elizabeth Reich is anticipating a $62 million hole from decreased sales tax revenue. The activists may find a City Council more amenable to taking money from the police. After all, the department got its money but violent crimes are keeping pace or surpassing last year.

“If some of these things don’t make it into the budget, we’re just going to come even harder next year,” says Ari Brielle, another organizer with Our City Our Future. “The council members’ constituents are only becoming more and more aware of what’s actually going on.”

And they are planning. Fulbright says the Texas Working Families Party will hold community training sessions on October 10. Those will include informational sessions for activists, but they are also seeking to identify and train potential City Council candidates who could run for office in May.

“So when we go into the 2021 budget fight,” Fulbright says, “we can actually count to eight.”