On Sunday, NextDoor users across the city logged in to find a message from Mayor Eric Johnson via what appeared to be the city’s official account. The post read that he did NOT (his caps) support cutting $7 million from the budget for police overtime. The post cited a 28 percent increase in aggravated assaults not related to family violence over the last 10 months. It noted that the murder rate was on track to match last year’s, the most homicides Dallas has seen in a dozen years. The NextDoor post did not include the total amount of what was budgeted for overtime.

“With the police department hundreds of officers smaller than it was a few years ago,” the mayor wrote, “the overtime budget supplements patrol officers and detectives working to keep people safe and to catch the offenders responsible.” It said to “let your council member know where you stand” and included a link to the contact information for all 14 of them.

Here are some topics of other recent posts from the city’s NextDoor account: a request to take the U.S. Census, locations for mosquito control spraying, COVID-19 testing locations, bulk trash pickups skipping a week. Nothing political. That made the mayor’s post stick out. It didn’t mention the other side of what he’s referencing. Why would it? It was a political ad — if not as defined by the Texas Ethics Commission then at least in its intent.

The mayor’s strategy of getting his message out wherever he can despite lacking support from his colleagues has drawn the ire of city staff. Last week, he even tweeted a link to a favorable story published by the Empower Texans-owned Texas Scorecard, which he claimed contained “actual facts” about the amendment. It was a bizarre move; Johnson, a Democrat, elevated a website owned by an organization that is funded with dark money and has for years used its resources to get Tea Party and other far-right conservatives elected to state office. His email newsletter has repeatedly advocated for his amendment, which some on city staff suspect violates state ethics rules. Johnson’s staff maintains all of the mayor’s messaging is above board. 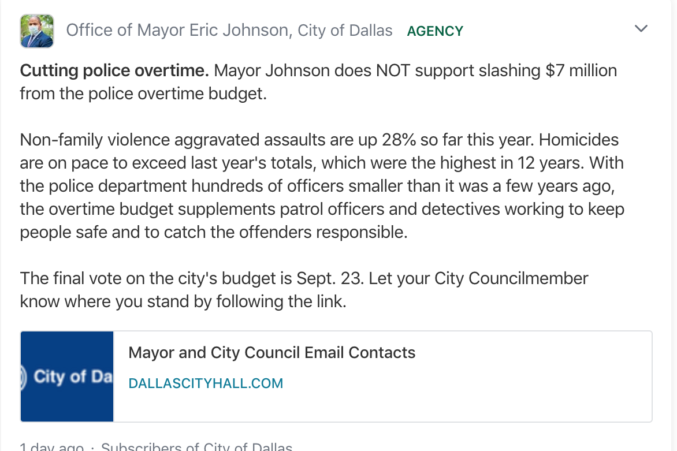 NextDoor, meanwhile, is a highly segmented platform. You can see only posts from your own neighborhood. It verifies your address through your mobile phone’s billing address, your utility bill, your driver’s license — something official. But if you’re the mayor, you can talk to everyone. The whole city elected you. Some cops can do this, too.

If you’re a Dallas resident who perhaps does not pay attention to the discourse at City Hall — remember, just 13 percent of Dallas residents voted in the mayoral election — and see that the City Council is cutting police overtime, perhaps you would be more inclined to contact your council member. “And the calls for people to contact them have been quite effective,” says Tristan Hallman, the mayor’s chief of policy and communications.

State law bars elected officials from advocating for matters that the public will vote on. Johnson’s staff argues that because the budget doesn’t appear on a ballot, the mayor can advocate for his position. His staff also notes, correctly, that his opponents have posted similar messages to NextDoor, Facebook, and Twitter. But on Facebook and Twitter, if someone doesn’t follow or friend you, you have to pay to spread your message, and that payment is made plain. In the case of NextDoor, the platform pushes the mayor’s message to people who didn’t opt to receive it. The message carries weight that a sponsored Facebook post wouldn’t.

The mayor has been trying to gather support for a budget amendment that would take $6 million from city staff salaries and put it toward public safety, infrastructure, and tax relief. His opponents — basically the rest of the City Council, as 13 of his 14 colleagues voted against his amendment last week— want to take $7 million out of the $24 million pool for police overtime and spend it on similar things. Johnson’s NextDoor post was intended to get residents to email their representatives and try to change their minds. (It is worth noting that not all on Council support the overtime cut. Council member and Deputy Mayor Pro Tem Adam McGough does not want to lessen overtime but did not agree with some of the other things that the mayor wanted to cut. The mayor’s amendment included another $7 million in reductions for things that the Council wanted in the budget, like transportation and arts funding.)

The mayor has ruffled some feathers at City Hall, where staffers are ticked that he wants to cut their salaries during a pandemic. He has frustrated activists who want the mayor to support taking money from the police department and reallocate it for social services. The most prominent group, Our City Our Future, has advocated for $200 million to be shifted from police into other city departments. This City Council and the mayor are at each other’s throats over just $7 million.

But back to the NextDoor matter. It’s the latest evidence of dysfunction between the mayor and the city manager’s staff. The mayor’s messaging about his budget amendment has apparently put him in the crosshairs of some city staff. Before the mayor’s post, Carrie Rogers, the director of the Mayor and City Council Office and one of staff’s supervisors, sent an email to her boss and colleagues explaining her interpretation of the city and state’s ethics codes. The mayor had sent out a series of email newsletters advocating for his amendment.

“It has to be informational in nature, not self-promotional. It cannot advocate for or against a measure. ‘I do this for you. Stand with me. I am fighting for you. I am doing what is right (read: they are not doing what is right.’ That is campaign work. You cannot work on campaigns. Period,” read the email, which was obtained by D Magazine. “You are a City resource. Therefore, you cannot be the creator of any such political advertisement.”

Mary Elbanna, the mayor’s chief of staff, countered with another email quoting the Texas Election Code’s definition of “a measure” as a “question or proposal submitted in an election for an expression of the voters’ will.”

“In the future,” Elbanna wrote, “we request that you not issue your own legal opinions or communicate with others, such as the body responsible for impartial hearings of City ethics complaints, regarding matters of law.” (Rogers had sent the email to the city attorney and the assistant city attorney, as well.)

In another email, Rogers responded that it is her “obligation to inquire equally about the validity of such concerns as it pertains to adherence to rules governing employees.” She wrote that it is “within my scope of responsibilities to determine if employees are performing their duties appropriately.” Kimberly Tolbert, the city manager’s chief of staff, then wrote an email supporting Rogers and reprimanding Elbanna. Tolbert writes that Rogers is Elbanna’s supervisor.

“It is imperative that all employees feel safe and have unfettered access to inquire about and address concerns regarding their peers, direct reports, superiors, or City officials,” Tolbert wrote. “The moment we say an employee cannot raise concerns is the moment we cease to be an accountable organization. In the future, you will not communicate with your supervisor in this manner.”

It’s worth noting that it is not just the mayor posting political messaging to NextDoor. Council member Paula Blackmon, who represents the neighborhoods near White Rock Lake and also voted against the mayor’s amendment, pushed the opposite view to her NextDoor members in her district before the mayor’s post. Her message also appeared to come from the city of Dallas’ official page if you weren’t looking closely.

A number of her colleagues posted a similar message to their Facebook pages. Council member Adam Bazaldua, of Fair Park and South Dallas, spent time responding to commenters under the mayor’s NextDoor post, seeking to clarify the side that wants to cut overtime.

The NextDoor message feels like it crosses a line. To me, it’s unclear that Johnson’s posts — and, to a lesser extent, Blackmon’s, for that matter — aren’t coming from the city of Dallas or that they’re not approved by the city. Johnson is listed as an agent of the city. They carry an added heft. They may not be a violation of ethics rules, but they are also not telling the full story. The mayor wanted a response from the public and presented the issue through his own lens using his broad platform.

Meanwhile, Johnson suspects the City Council is teaming up against him away from public view. Before the city manager unveiled his proposed budget, 10 members signed a memo to the city manager urging him to pursue alternative policing strategies. Numerous Council sources told D Magazine on background that they had planned to remain silent after the mayor presented his budget amendment for the first time. They say they do not discuss policy outside public meetings, which would be a violation of the Texas Open Meetings Act.

“We have seen examples of these kinds of backroom agreements for months, but we aren’t going to pretend that we’re the arbiters of what is legal and what isn’t,” Hallman said. “The mayor has been extraordinarily transparent with his proposals and his strategy of taking his case for public safety, streets, and tax relief to the public. He encourages taxpayers to continue to weigh in on the proposed budget.”

It certainly doesn’t look like the Council, staff, and mayor are making City Hall a more civil place to conduct the public’s business. The conflict comes at a particularly difficult time, as the 2021 budget will likely have a shortfall of $62 million because of cratered sales tax revenue. If you thought this year’s budget season was rough, buckle up. More cuts will be necessary next year; many Council members say the reason they won’t support the mayor’s amendment is because they anticipate mandatory salary cuts in the next budget. If they start now, how low will they go next year?

The Council will vote on the budget next Wednesday. Until then, do your research. Social media is never a great place to get the whole picture. Especially not NextDoor.