Last week, a piece I wrote about an upcoming Black Lives Matter march in the wealthy enclave of the Park Cities caused consternation among some readers and commenters. I figured the least I could do now that the march is behind us is report back on how it went.

Between 400 and 500 spirited but orderly demonstrators marched around the perimeter of the Southern Methodist University campus Saturday afternoon chanting “Black lives matter” and “Say his name.” Their discipline was matched by police from University Park and Highland Park, who joined state troopers from the Texas Department of Public Safety in forming a mobile cordon near the march but almost always remaining about a block away from it.

Neither element, marchers nor police, sought to incite the other. The whole thing went off in about an hour. A second much smaller march announced for later in the day trickled through the area and quietly dissipated.

The consternation caused by my piece on FrontBurner last Friday had less to do with the marches themselves, already announced and known, than with an element I added to the story – my knowledge of a citizen militia in University Park making preparations to counter violence during the marches.

I walked a couple of stretches with the marchers Saturday and also drove around the march and saw no evidence of the militia. One marcher, the political consultant and media personality Nicole Barrett, told me marchers had seen a man dressed all in black talking on a secret-agent headset observing the march from some distance. She saw no guns.

Conservative political maverick Russell Fish, leader of the militia, told me after the march that his group had fielded its own fire truck and had made other preparations: “We were serious enough to have set up a triage center with a doctor,” Fish said by text.

He added: “Sun Tsu said the best victory is one that comes form a battle you don’t fight.”

Sun Tsu was a Chinese military strategist in the fifth century before Christ.

Toni Scott, a marcher with the organizing group In Solidarity DFW, told me she thought the people in Fish’s group should be embarrassed. “They should feel silly,” she said.

Diane, another In Solidarity member who declined to give me her last name, said she was an Army veteran. “One thing that scares me,” she said, “is that, if they are as armed as they say they are, they’re going to hurt themselves. Or they might accidentally shoot somebody, because they don’t understand how to carry a firearm or a long rifle.”

In Fish’s defense, I have to offer that I know he is well trained in the handling of firearms, having taken advantage of about every kind of civilian firearm training available. I have been around him and some of his cohort when they were shooting, and they all seemed well-trained. Some are former military.

And there is this: the fear in Fish’s part of the Park Cities before the march was that demonstrators would enter residential neighborhoods. A week prior, a BLM march did concentrate on the home of a prominent business executive in the Park Cities. That executive, Beck Group CEO Fred Perpall, described these marchers as being “like the cheerleaders at South Oak Cliff [High School] or the church people. This is like the Black church people.”

A demonstration near private homes is different from one on commercial, public, or institutional ground. It just is. There are kids inside. It’s where families live. 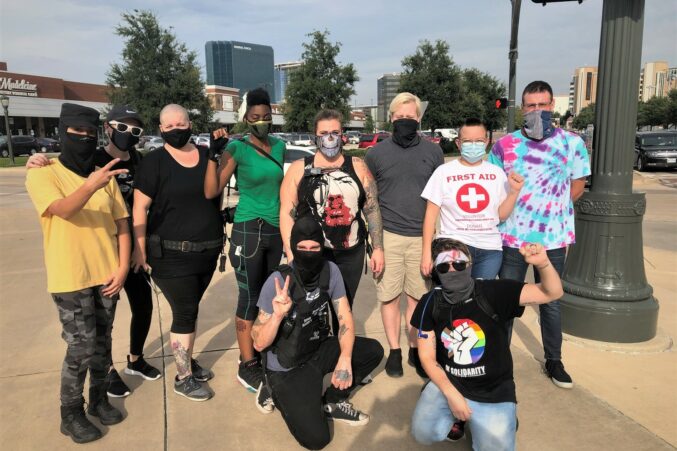 In Solidarity DFW posed for a team picture at Saturday’s BLM rally in the Park Cities.
Jim Schutze

Fish and his friends were looking at video of burning buildings in Kenosha, Wisconsin. Burning someone’s business and livelihood is different only by degree from burning that same person’s home. If one, why not the other?

On the other hand, I drove Fish’s neighborhood mere blocks from the march a couple of times as it was happening and observed a near-funereal calm. I wasn’t going to run up and kick on anybody’s front door wearing less than full ceramic body armor, but at some point you have to take peace for peace. And I need to speak to Fish at some point about the fact that the Biden/Harris signs in his neighborhood outnumber the Trump signs about two-to-one. (Most residents have no signs at all except for something about Scots. Afraid to get out and look closer.)

The marchers were about 85 percent White, almost all of them associated with SMU as students or faculty, except for the In Solidarity group who came from a wider area. Jo Lew, an SMU undergraduate, told me she was marching because she knew of repeated questionable incidents in which SMU students of color were stopped and questioned by university police.

“It’s something that is really disgraceful,” she said. “We need to not allow that. We need to represent our community in the best possible way and fight for justice for everybody.”

George Odwesso, another undergraduate marcher, shrugged and gave a puzzled smile when I told him people were sufficiently worried to have formed a militia. “I guess things are just so polarized now,” he said, “people can believe things that would have been totally impossible a short time ago.”

Things were not so calm Saturday in other parts of town. Dominique Alexander, head of the pro-BLM Next Generation Action Network, was arrested at a conservative rally at Main Street Garden Park downtown. Video on Facebook shows Alexander barging into the conservative rally and being picked up bodily and tossed into a flower bed by a security guard. Associates of said security guard then sprayed what appeared to be mace on other protesters who were nearby on Harwood. The rally was put on by a group promoting a kind of diversion therapy for liberals. Alexander was definitely diverted.

He was the only person jailed in that minor fracas. When he was released Sunday morning, he said he had been held on outstanding “tickets.” He told reporters outside the jail that a judge had ruled he had already satisfied those tickets with “time-served.” Alexander is awaiting trial on a felony family violence charge in Dallas County and also on a theft charge on Denton County.

The two actions, BLM/SMU on the one hand and Alexander getting arrested at Main Street Garden on the other, were connected to the same cause—racial justice—but could have taken place on different planets. When I ran into Nicole Barrett at the SMU march, it was a chance for me to do a reality check.

I met Barrett, who is Black, more than 15 years ago when she was working for former Dallas City Council member Maxine Thornton Reese. She’s a veteran of Dallas city politics. I fell in with her while she marched and asked her, “How would you compare this with 10 years ago?”

“Man, this is real,” she said. “This is real. These young people have really gotten it together. They are educated and involved. This is unlike anything. Now the voices are really being heard.”

She said, “I’m telling you. And they have come out, Black, White, all of them. They are really standing together. That I love. They’re in this together. I love that.”