Mike Wilson, who has served as editor of the Dallas Morning News for almost six years, told the staff in an email today that he is resigning at the end of the year. His letter notes a desire to “write, edit, lead, teach, learn,” and is “having conversations about where that might be.” His departure comes as some of the newsroom seeks to unionize.

Wilson says he’s handing newsroom operations over to managing editor Keith Campbell as reporters and editors “need and deserve fully engaged leaders.” In the meantime, he’ll help with the transition process and finish out a few projects with Grant Moise, the paper’s publisher. It’s not clear what the plans are for a permanent replacement. In his own note to staff, Moise writes that “we will continue to operate under this structure for the foreseeable future.”

Wilson was the first outside editor hire for the company in more than 30 years, coming from tours at FiveThirtyEight, the Tampa Bay Times, and the Miami Herald. He followed longtime editor Bob Mong, who retired in 2015 after 14 years leading the newsroom. Wilson led the paper’s digital-first strategy, implementing policies that required stories to be published online before they ran in the print edition.

He was also the first editor to oversee the paper’s paywall and digital subscription model, which now has about 40,000 digital-only subscribers. Getting that number up will surely be a priority for whoever comes after him.

The News has finished as a Pulitzer finalist in three of the past five years. In 2017, the paper’s coverage of the downtown Dallas police ambush was a finalist for breaking news. The next year, columnist Sharon Grigsby was a finalist for her series on sexual assaults at Baylor University that dug into how the school’s leadership failed the victims. The most recent Pulitzer nod was for photojournalist Tom Fox, who bravely photographed a gunman who fired his rifle outside the Earle Cabell Federal Building last year.

Upon his hiring, Wilson’s bonafides centered on his editing of narrative nonfiction and his eye for talent. And, indeed, the paper in recent years has lost many reporters to outlets like the New York Times, the Washington Post, the Wall Street Journal, the Boston Globe, and ProPublica, among others. The paper recently published Mark Lamster’s deeply reported piece on the Joppa neighborhood, which could very well be the last long-term editorial project to publish under Wilson’s tenure. The News‘ piece on his departure also notes “more than 400 awards for journalistic excellence.”

In a text, Wilson says he’s “feeling great about the decision and my time at DMN” and would “like my note to the staff to do the talking.” The letters staff received this morning are after the jump. 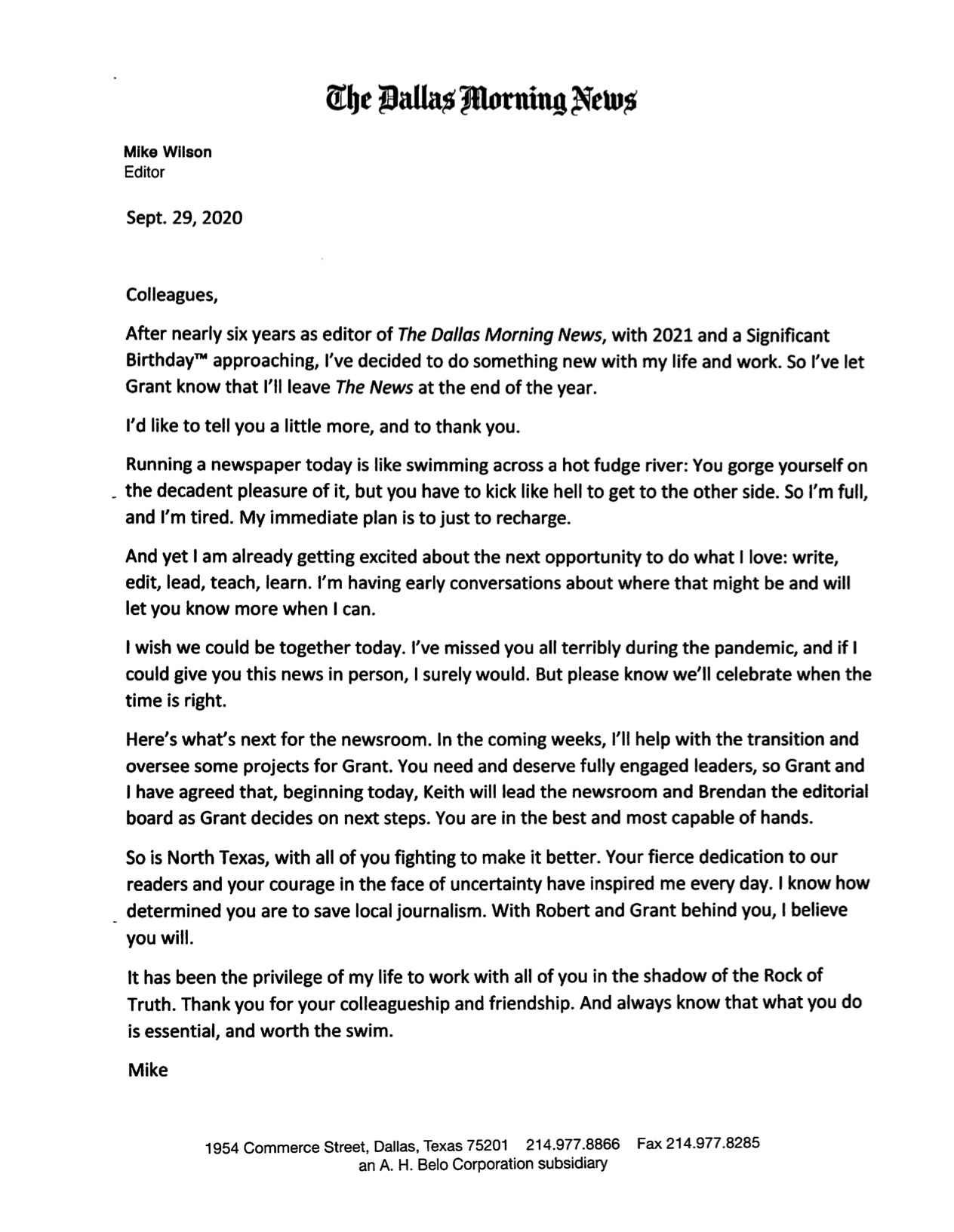 Here is the note Moise followed up with:

Mike Wilson, our gifted editor and advocate, has told me he is leaving The News at the end of the year. Mike talks about his future plans in his announcement to the newsroom, which is attached.

Mike has played a pivotal role in The News’ transition to a sustainably profitable digital newspaper and we are all grateful to him for his leadership.  When Mike first came to The News almost six years ago, we were a print-first newsroom, and thanks to his commitment and vision, we are one of the most advanced digital legacy news organizations in the country.

We’ve benefited from Mike’s compassionate and ethical leadership, his collaborative style and his embrace of diversity as a core journalistic value. The newsroom’s award-winning coverage of the 2016 police shootings, the extraordinary Joppa project, Standoff, Pain & Profit, the Amber Guyger-Botham Jean podcast, the reimagined Arts & Life section and the creation of the Breaking News desk are all part of his substantial legacy. Under his leadership, The News was three times a finalist for the Pulitzer Prize and won two National Edward R. Murrow Awards and countless other national honors.

I know you join me in wishing the very best for him and his family.

Keith Campbell, our managing editor and a 30-year veteran of The News, will lead the newsroom as Managing Editor. Brendan Miniter, our editor of editorials, will continue to lead the editorial board. Keith and Brendan will report to me. I am confident they will provide great leadership and continuity as we make this transition, and we will continue to operate under this structure for the foreseeable future.

Having talented leaders in roles that govern our news and editorial content is absolutely key to our success. I am excited about the impact Keith and Brendan will have on the day-to-day excellence of our newspaper as I make important changes in how we work collaboratively to maintain the journalistic traditions of The News.

As always, I thank each and every one of you for your diligence in supporting the goals we share for our company.

What Should We Rename Woodrow Wilson High School?