This is a breaking story and will be updated.

Dallas Police Chief U. Reneé Hall will resign as chief of the department after serving in the role for just over three years. City Manager T.C. Broadnax accepted her resignation on Tuesday. She is the first woman to ever lead the Dallas Police Department. In a statement, Broadnax says she will stay on through the end of the year rather than her planned effective date of November 10.

Her decision comes after weeks of criticism by activists and council members following a violent, long weekend of protests that involved dozens of instances of police being violent toward demonstrators.

In her letter, Hall cites “a number of inquiries about future career opportunities” but does not mention any of the questioning of her leadership in recent months.

“As you can imagine, for many reasons, I must keep my next career step confidential,” she writes. “Let me assure you that I will remain committed to my true calling which is law enforcement.”

Hall’s future with the department has been up in the air since June, when she first faced the City Council following hundreds of mass detainments on the Margaret Hunt Hill Bridge and instances where protesters were fired upon with pepper balls, “sponge” round projectiles, and tear gas. She denied that tear gas was used on the bridge against protesters, which later proved to be untrue.

Dallas Mayor Eric Johnson questioned her about the usage of the chemical weapon, using reporting in D Magazine as a basis. Our writer, Tim Cato, claimed he had been tear gassed among hundreds of other protesters. Hall adamantly denied it. An after-action report of the weekend’s protest proved that it had been. Suddenly, the question became whether Hall had control of her department; either she was lying, or someone had lied to her.

By August, several City Council members told Hall that they no longer trusted her. After that meeting, a performance review was scheduled for the city manager, which many believed would also include hard questions about Hall’s job.

“I had not spoken to the chief about her decision, but I was not terribly surprised by it considering the recent public statements of my City Council colleagues,” read a statement from Mayor Eric Johnson. “I know that people who commit themselves to careers as police officers face immense challenges and must be willing to make tremendous sacrifices. We demand much from them and especially from our police leaders — and rightfully so because the stakes are incredibly high.”

Hall was hired in the summer of 2017 while she was a deputy chief in Detroit. She spoke highly of community policing and expressed the belief that cops should live in the city they police. She was supportive of reforms, most notably pushing forward the Office of Community Police Oversight.

That body reviews citizen complaints against police officers and is now staffed with a full-time police monitor. Hall also initiated a “duty to intervene” rule, which would require police officers to stop a colleague if they see any misconduct. The chief implemented that rule after multiple officers watched George Floyd die with a knee to his neck in Minneapolis. She also curbed the use of tear gas and less lethal projectiles after that first weekend of protests over Floyd’s death.

“In her three years of service, Chief Hall has provided consistent, passionate, resilient and robust leadership to our City,” Broadnax wrote in a statement. “She has implemented a host of reforms that will assist our department as we move forward. I believe Chief Hall has succeeded in placing DPD on a path of true 21st Century Policing, and our next chief must have that same stout commitment to excellence.”

When she was hired, the police union openly described Dallas PD as being “in a catastrophic state.” The department had lost about a thousand officers between 2014 and her arrival. The cratering of the police and fire pension fund triggered a mass exodus from the department. The suburbs were believed to be safer to police and paid more.

Hall would advocate for, and receive, higher starting salaries to help shore up the loss of bodies. But she never quite gained the trust of the rank and file. Here is an anecdote from a 2018 profile in D, a little under a year after she was hired.

In 2019, in the midst of the mayoral race, murders spiked, cresting 200 for the first time since 2007. Hall answered by promising a reduction of violent crime by 5 percent. The mayor led criticism that she wasn’t going far enough in her plan to curb the violence. The department didn’t meet her goals, either. Murders are about on pace to mirror last year’s, which were about 30 percent higher than they were in 2018. Aggravated assaults have increased by nearly 30 percent year-to-date compared to 2019.

These numbers were revealed as the city reeled from the violence of the first week of protests, which included looting, property damage, violent arrests, and cases of officers shooting protesters at point-blank range with so-called “less lethal” munitions like pepper balls.

The city manager will appoint an interim replacement until the city can conduct a search for a permanent chief. 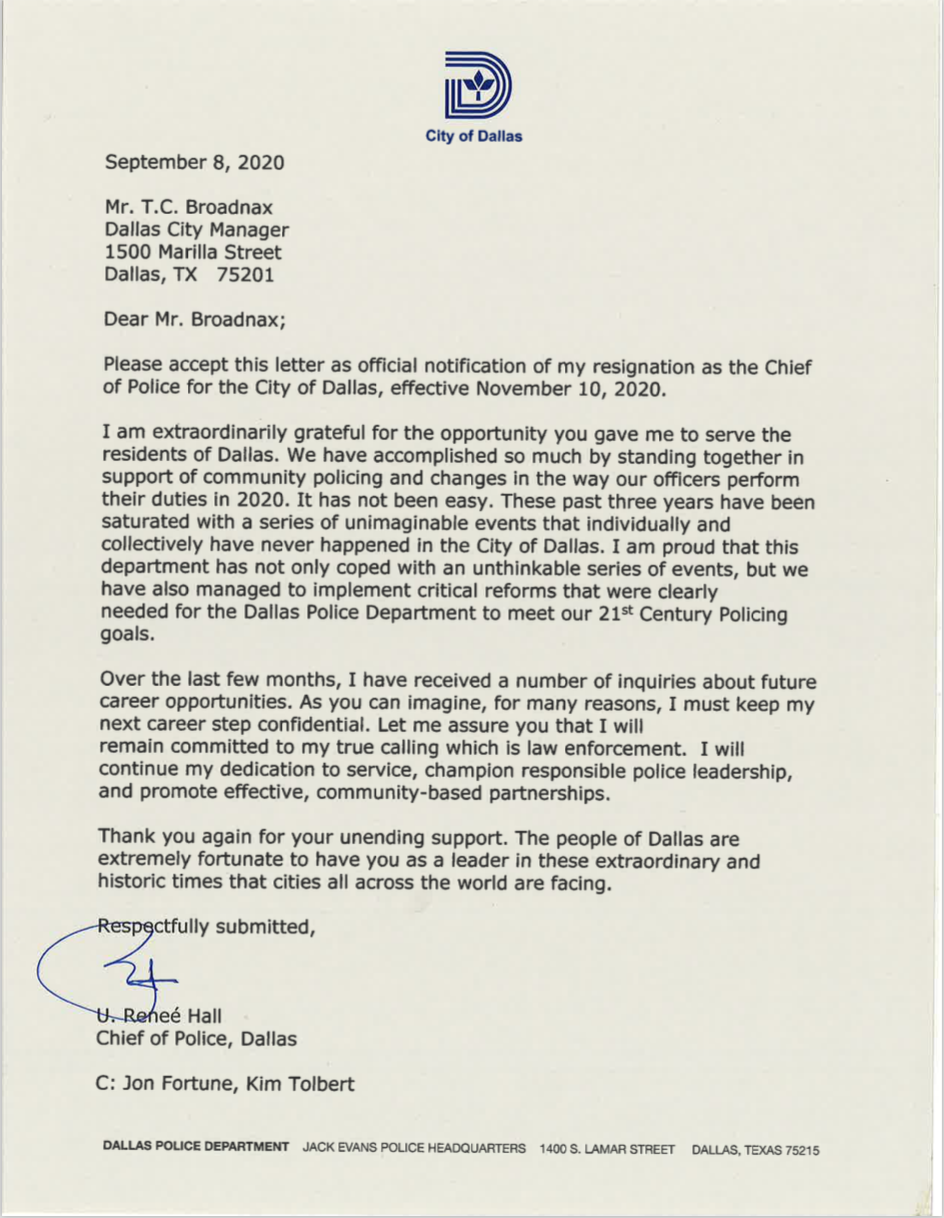 Tuesday, Chief Reneé Hall informed me she will resign her position as Dallas Police Chief on November 10, 2020. I spoke to Chief Hall this afternoon and asked her to remain in this key position until the end of 2020. She has agreed to do so. That will enable us to complete the short-term goals of the R.E.A.L. Change initiative. I am extremely grateful to Chief Hall for extending her time in Dallas. This year has been tumultuous and uncertain. A few more months of her leadership are key for several projects and for a seamless transition within the police department.

In her three years of service, Chief Hall has provided consistent, passionate, resilient and robust leadership to our City. She has implemented a host of reforms that will assist our department as we move forward. I believe Chief Hall has succeeded in placing DPD on a path of true 21st Century Policing, and our next chief must have that same stout commitment to excellence.

Since the Chief has agreed to stay through the fourth quarter, we have time to develop the search criteria for a new chief. I will be announcing that process when it is finalized.

I hope you will join me in wishing our police chief the very best in her next endeavor. She will be a tremendous asset to any entity looking for solid leadership and management skills accompanied by an obligation and commitment to excellence in safety, security or law enforcement.

“I want to thank Chief Hall for her service to the City of Dallas. I had not spoken to the chief about her decision, but I was not terribly surprised by it considering the recent public statements of my City Council colleagues.

“I know that people who commit themselves to careers as police officers face immense challenges and must be willing to make tremendous sacrifices. We demand much from them and especially from our police leaders — and rightfully so because the stakes are incredibly high.

“On top of those demands, Chief Hall had the burden and the distinction of being the first woman — a woman of color, no less — to serve as the police chief in Dallas. That was not lost on me. I wish her the best in her career and in her life moving forward.

“I believe the Dallas City Council now must continue to support public safety in our communities. We cannot exclusively rely on law enforcement to reduce crime, but we absolutely need new policing strategies and fresh eyes that can help us reverse the unfortunate and unacceptable increases in violent crime in our city. We need strong and experienced police leadership that instills a culture of community policing, crime-fighting, and accountability.

“While the city manager searches for a new police chief, it is our job as policymakers to provide police commanders with the tools they need to be successful and to make Dallas the safest big city in the country.”

Almost get fired, then get a raise two months later. Welcome to Dallas.
By Bethany Erickson
Police

One of the officers was fired last month after video showed him punching a man in Deep Ellum.
By Alex Macon
Police

The Dallas Police Department Has a New Boat