If it wasn’t clear at the start of budget season, six weeks ago, you should now understand that the city of Dallas’ budget is mostly baked by the time the public sees it. Balancing a budget and getting it approved is the top job requirement for City Manager T.C. Broadnax every year. And he did it again late Wednesday night, narrowly. The budget for fiscal year 2020-2021 passed by a vote of 9-6. It was the most debated vote in a decade, since the city instituted deep cuts as it dealt with tax revenue shortfalls after the Great Recession. Sound familiar?

The city’s biggest expense is public safety (as it is in other cities), so it was the biggest target for cuts, small though they may be. Ahead of the vote, about 70 speakers pleaded with the City Council one last time to reallocate police funding to other city services. They’ve done it every week and at every relevant meeting since this cycle began, taking the message from the protests to City Hall. But the decision was effectively already made by Wednesday night. Minus a few lingering amendments, this budget was done. It does not significantly change how the police department is funded.

This is the conflict to watch going forward. Those speakers have become more organized and more diverse. Yesterday, Rev. George Mason, the senior pastor of Wilshire Baptist, in Lakewood, added his support to rethinking police funding. Lawyers and physicians and teachers spoke. Activists threatened to vote their representatives out of office for not hearing them. Their message was clear: do it, or we’ll make you regret it.

“I beg you not to default to those who want you to do more of the same,” Mason said. “You may have noticed the voices of diverse faith leaders are getting stronger and more united on both sides of the river. If you pass this budget as it is, I can assure you that you will only embolden this advocacy.”

Are these reformers a minority, or will they become a voting bloc to threaten the makeup of the Council? Many council members say the average Dallasite tells them they want more funding for public safety, not less. Mayor Eric Johnson has said he has received “thousands” of emails saying as much. But the activists are the ones calling in every week saying they don’t feel heard. They’ve been marching for over 100 days.

“Our elected officials are supposed to have courage and political imagination,” Mercedes Fulbright, an activist with In Defense of Black Lives, told me before the budget vote. “We elect them to be somewhat savvier than the rest of the community, but if you’re telling me the way that you vote is based on a minority view of your community, then, yeah, you’ve gotta go.”

The total budget is $3.8 billion, with the discretionary general fund accounting for $1.4 billion. The police department gets about a third of that. By the time the Council begins suggesting amendments to the proposed budget, in early August, they’re really only working the margins.

They have about six weeks to suggest changes, convince their colleagues, and make sure all the tinkering doesn’t result in an unbalanced budget. (These amendments can be quite esoteric. Yesterday, they spent more than an hour debating whether to pay dues for a dozen or so professional organizations.)

Activists began calling for $200 million to be reallocated from the police budget into services after the budget had been proposed. None of those suggestions received support from Council.

In fact, the biggest controversy this cycle was a relatively small amount of money in the context of the broader budget. The $7 million cut from police overtime reduces that line item from $24 million to $17 million. It became the central point of contention for this Council’s reform of the police budget, when it really amounted to less than a single percentage point of the more than $500 million the department wound up receiving. In fact, the police department received $8 million more than it is projected to spend in the current fiscal year. That’s in line with what we’re seeing in most American cities. They’re giving more, not less, to police departments. 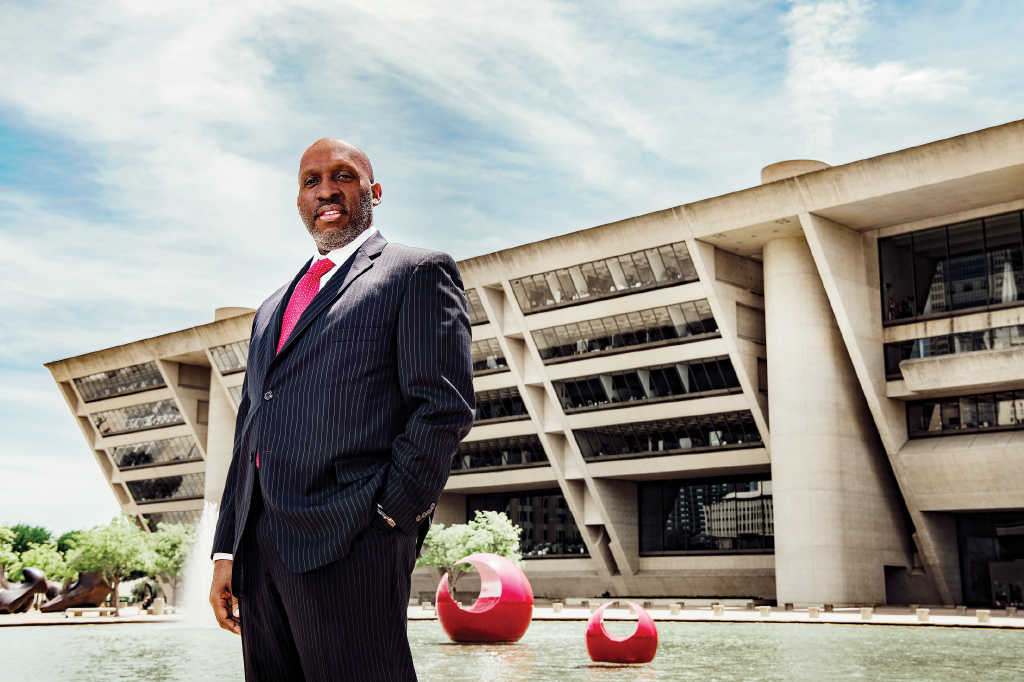 The highest-ranking city council members — Mayor Johnson, Mayor Pro Tem Adam Medrano, and Deputy Mayor Pro Tem Adam McGough — all voted against the budget for different reasons. That’s rare. Medrano, who represents Deep Ellum, the Cedars, and parts of Oak Lawn, said “I just don’t think it’s the best budget we could get,” but didn’t elaborate much further. Johnson and McGough said they would not vote for a budget that included cuts to police overtime, even if they agreed on some of the things those savings paid for. Johnson also said he couldn’t vote for a budget that didn’t have salary cuts for some staffers at City Hall.

Council members Jennifer Staubach Gates and Cara Mendelsohn, both of whom represent two of the city’s northernmost districts, also disagreed with cutting police overtime. Mendelsohn again hammered on the fact that murders are on pace to top last year’s record amount, and aggravated assaults are again up by 28 percent. To her, more money for the police is the answer.

The other no vote was the remaining North Dallas council member, Lee Kleinman, who, like Medrano and Gates, thumbs-downed the final budget before he is term-limited from the Council. He cited two reasons: one, Council didn’t lower the tax rate enough to offset the tax increase from an expected jump in property values, and, two, “because we folded” on rethinking police funding.

“We will never see change in this city if we couldn’t do it this year when we actually had an opportunity,” he said. “We just squandered it.”

Kleinman believes the police unions hold too much sway over the City Council. He has thought that for a long time. He wanted to see the City Council push back against accepting political contributions from those unions. He wanted to overhaul the police academy and recruiting practices, which he says are akin to “indoctrination” since they’re both overseen by sworn officers. (He is excited that the city of Dallas is partnering with UNT Dallas and the Caruth Institute to shift the academy to the university.) He failed to defund the mounted patrol unit. He thought the momentum from the activists would result in bigger changes to the police department.

In an interview this morning, Kleinman said, “I don’t consider myself a progressive by any means,” but added that he thinks his more progressive colleagues on the Council didn’t push hard enough to get real change in the department. Part of that is the nature of the budget. He has long advocated for zero-based budgeting, which would start the process from scratch each year. (“That makes the city manager’s head explode,” he quipped.) Or at least sunset some departments for blank-slate consideration.

“Maybe I’m jaded, but you go back to that term and how ‘baked’ the budget really is, it’s just not serving the interest of the city,” he said.

“We will never see change in this city if we couldn’t do it this year when we actually had an opportunity and we just squandered it.”

Part of that makes sense. The city provides services that are essential to residents, like trash pickup and street maintenance, that can be tinkered with based on financial conditions but can’t be eliminated. Others, however, could have opportunities for some creative budgeting, given the chance.

After all, it took two whole budgets for the City Council to give the department money to fix efficiency problems that were identified by KPMG in its (expensive) study of the department in 2018. One of its biggest suggestions was to further “civilianize” the department by hiring non-sworn staffers to free up cops from working desk jobs and get them back to the streets. They did that by taking $7 million in overtime and reallocating it to pay for 95 new office workers, which will free 95 cops to go back on patrol. The department expects this to be completed by the end of the next fiscal year, which will meet its goal of having 18 percent of its payroll made up of civilians.

Councilman David Blewett, of downtown and East Dallas, said that should help cover the drop in the overtime budget.

Some council members view this as real change. And the budget does fund infrastructure improvements, bike lanes, lighting, mental health services, job training programs, and housing assistance, sewer lines where there were none, and many other long overdue services. The RIGHT Care program, which pairs mental health providers with a cop before they’re sent out to a behavioral health call, will be expanded. Broadnax made sure all of this was included in what he proposed, allocating $30 million for such things. He said he did so after speaking with protesters.

He also laid out a plan for additional de-escalation and implicit bias training, a simplified complaint system for citizens, more body cameras for officers, a summer jobs program, and vowed to release more information on police shootings with the public.

“I think all of those items are going to specifically speak to public safety initiatives and hopefully will make more sense to the public that our focus is on being more efficient while continuing to reimagine public safety,” said Council member Adam Bazaldua, of Fair Park and South Dallas, ahead of the vote. “We’re going to have to be OK with incremental change because I believe the type of incremental change we’re seeing now is pretty monumental.”

The activists don’t agree. They want money from the police department spread out elsewhere, arguing that the gap between public safety and the city’s other departments — housing, arts and culture, libraries, parks — is so great that it needs to be rethought. They believe any single act of police violence is too many, that the system that funds police departments is broken and needs to change.

It is hard to bake that in once the budget is already complete. It is even harder without the political will.