In Thursday’s 102-degree heat, a handful of volunteers stood beside their cars accepting donations of backpacks and school supplies at the Martin Luther King, Jr. Community Center, in South Dallas. They directed others to a nondescript building down the road on Parry Avenue, across from Fair Park.

Overseeing it all was Tramonica Brown, the founder and leader of Dallas-based civil rights group Not My Son. She arrived hours in advance of the advertised 6:30 p.m. start time and left well after midnight. But she focuses on the generous support of her team and their volunteers, not her hours.

Not My Son was born of the protests against police violence in the wake of the killing of George Floyd. But it has extended its arms into the community, providing food to the homeless, cleaning up the streets, and working with elected officials to impact policy.

The group has three pillars: civic engagement, social activism, and community outreach. Their volume over the last three or so months is impressive. They marched people to the polls for early voting in the Democratic primary runoff. They entered into discussions with U.S. Rep. Michelle Beckley about a police reform bill. They went to Gainesville to protest a Confederate statue (where they also encountered armed Confederates). They went to a McKinney City Council meeting to protest a Confederate statue, too. They rallied on Juneteenth and the Fourth of July. They marched for LGBTQIA+ and women’s rights. Recently, they’ve focused on two community outreach initiatives: the South Dallas Clean Up Project and the Back 2 School supply drive and community festival.

Part one of the South Dallas Clean Up project attracted more than 100 volunteers. Split up into teams of six, with one volunteer medic each, they cleaned both sides of Martin Luther King Jr Blvd. and 2nd Avenue. William’s Chicken sponsored the event and gave a “hefty, hefty” donation, Brown says. Each team had 20 boxes of food to hand out, so each homeless person received two pieces of chicken and a biscuit.

“Yaheim [Israel, Brown’s husband and the leader of the Watchmen], had been going for quite some time down there to feed the homeless right when we began protesting,” Brown said. “So he already really knew where all of them were typically stationed.” 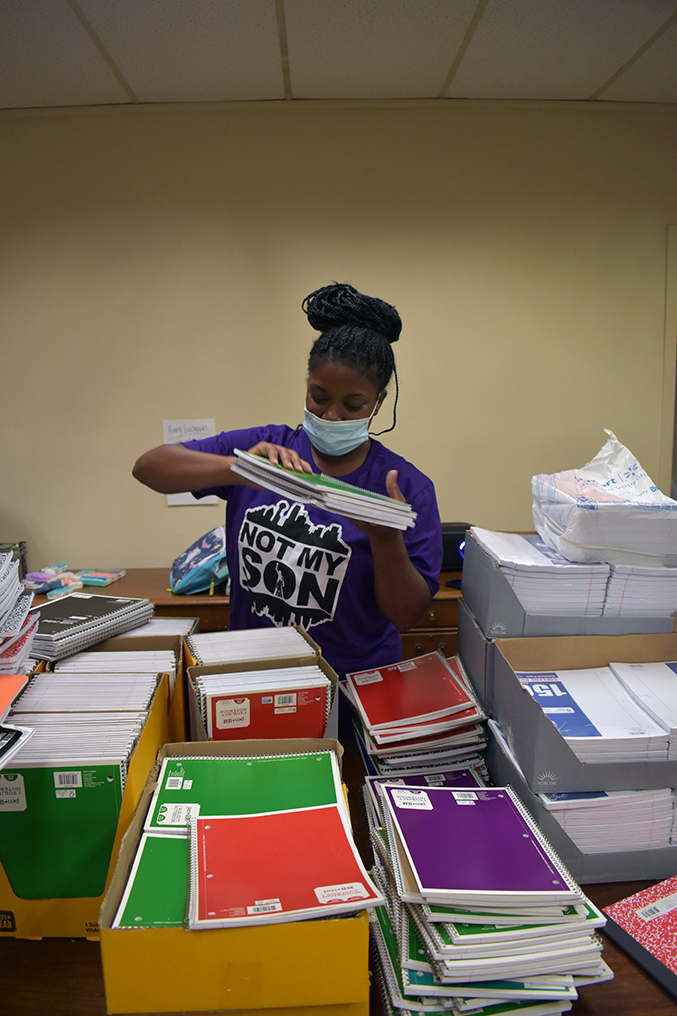 Tramonica Brown, a co-founder of Not My Son, organized a school supply drive for the community. (Photo by Trace Miller)

This is only one example of Not My Son’s relationship-oriented service. Another is the way the group interacted with Tent City. “We just sent cars out there” with 100 boxes of food, Brown said. “We didn’t clean up out there because we wanted to build a relationship with them before.”

They returned on July 25, handing out toothbrushes, toothpaste, and soap to the homeless. They posted checklists and tips to stay cool on Instagram. They held the event earlier in the day, from 12 p.m. to 3 p.m. Just like the first time, they fed at least 300.

“What we wanted to do was to spark the narrative, so that way other people can continue to do it,” Brown said. “because there’s tons of groups out there who wanted to do community outreach. And we can’t do it by ourselves.”

So far there’s every sign of success. Four other groups have already begun organizing cleanups in South Dallas as well as other parts of the city. Not My Son is also organizing a school supplies drive and a tutoring initiative. Brown is a former teacher. The stakes are high for her.

“School—it’s problematic already,” she said. “A lot of kids are gonna get left in the dust. It’s sad to say it that way, but some of those kids who need that extra push, who are special needs of some sort, they are going to need more than the average kid.”

Which is why Not My Son has partnered with the Smart Project to provide in-person and virtual tutoring in math, reading, English, Spanish, chemistry, physics, and biology for Title I students. Which is why Not My Son volunteers and organizers are stuffing backpacks—last night and tonight—with donated school supplies collected over the past week or so.

Tomorrow, Not My Son, the Watchmen, and the Smart Project will hand out the backpacks to preregistered families at Crawford Memorial Park, in Pleasant Grove. When parents sign in for their children’s backpacks and supplies, they’ll have the option to sign their children up for tutoring. Most of the Not My Son team plans to tutor.

“We have to show better to require better,” Brown said. “It’s imperative that we show them what we mean. Like, we want to see our streets clean, councilmen. We want to see our government built better, so we’re gonna have get-out-the-vote initiatives, we’re gonna challenge the people to go out and vote… Yeah, we’re out here hollerin’ and screamin,’ and with good cause and with good justification, but there’s gotta be an endgame.”

Back inside last night, in that dingy building filled with colorful backpacks, the conversation drifted to politics and strategy. How do we educate people about mail-in ballots? How do we mobilize Millennials and—especially—Zoomers to vote? How can we transport low-income voters to polling stations? Because it can work. It will work. Not My Son just has to keep going.

“Everybody’s not gonna get a seat at the table,” Brown continued. So we have to be creative, and we have all these beautiful people who have entrusted us and they’re following us. So we have to use that to actually create a real narrative—to be like, ‘Hey, we are cleaning up our community. We’re asking that we defund from the police and invest in the communities.’”