The Dallas City Council will soon vote to begin the overhaul of Hensley Field, the 738-acre former Naval yard at the western edge of town. Later this month, the full Council will consider spending $2 million in mostly bond dollars on a master plan to chart the redevelopment of the enormous parcel that has long been used for random storage.

The city housed the Robert E. Lee sculpture here until it was purchased and moved to a West Texas golf course. It’s where the police department keeps its aging vehicles. It’s where the city put nurse Nina Pham’s dog after her owner contracted Ebola. In its darkest moment, the city even considered shuttling the homeless here, a dozen miles from downtown.

There has not been a concrete plan for all these acres since the Navy vacated the premises in 1999 without cleaning it up. It’s near Mountain View College, Dallas Baptist University, the Potter’s House of Dallas, Mountain Creek Lake, a handful of neighborhoods, and a Home Depot distribution center. It’s about as close you can get to Grand Prairie while still being in Dallas. Councilman Casey Thomas, who represents the Oak Cliff district where it is located, called the land a “blank canvas,” one that is fewer than 100 acres smaller than the entire footprint of downtown.

“This is the type of project that not very many cities have had an opportunity to create,” he said.

On Monday, Peer Chacko, the city’s chief planning officer, briefed the economic development committee on the possibilities. It could support “7,000 new diverse, mixed-income dwellings,” another 7.5 million square feet of “commercial, institutional, and civic space,” and 15,000 “new jobs created across sectors and industries.”

Dallas has for years touted a neat number of how many more “affordable” units are required to meet citywide demand—10,000. It’s not hard to understand why Thomas referred to this as a “legacy project.” But there is much work to be done.

For one, the site is polluted from years of military use. There’s jet fuel and battery acid and lead paint. The Navy was ordered to clean it up in a 2002 settlement with the city but has dragged its feet in the years since. Chacko said Monday that the Navy has “committed” to the cleanup using existing funds. He believes having a master plan would get them in gear. Currently, the Navy is investigating the scale of the contamination.

“The site has been partially remediated and such work has been ongoing for years,” Chacko wrote in an email after the meeting. “We believe that the master planning process will provide momentum for cleanup efforts by clarifying intended site plans, future uses, and phasing. We will be keeping the Navy involved and informed throughout the master planning process and they will be included in conversations about phased implementation around a cleanup schedule.”

Councilman Chad West, who represents neighboring North Oak Cliff, said he wanted the master plan to include public transit and floated the idea of extending DART’s Red Line out to the site from Westmoreland Station. That connection will be key, particularly if the city wants to attract jobs and housing.

“You get past Mountain View College and a few neighborhoods and it opens up,” West says. “You wouldn’t have to cut through neighborhoods like you would in other parts of the city.” 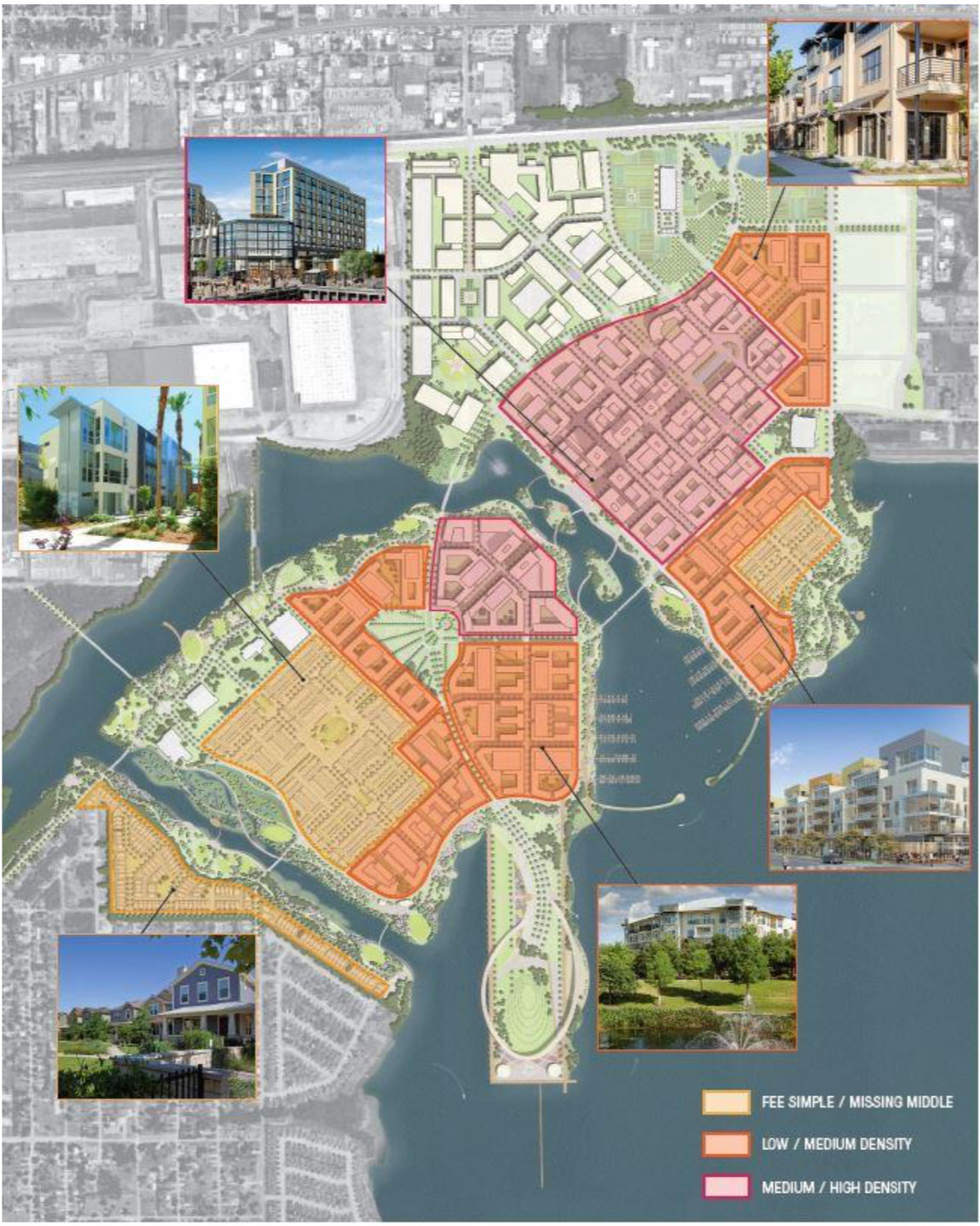 Goals for the Hensley Field development. (Courtesy city of Dallas)

This has also been a priority for Mayor Eric Johnson. It is one of Dallas’ 15 designated Opportunity Zones, a federal program that provides tax breaks on capital gains that are invested in low-income communities. Many of Dallas’ Opportunity Zones—which were picked by the governor’s office after lobbying from private developers—are near neighborhoods that probably didn’t need the nudge, like the Cedars. This part of Dallas doesn’t have that same organic growth.

In a trip to the White House in January, Johnson touted Hensley Field as a “unique opportunity that could produce tremendous benefits for Dallas residents.” City staff has found seven similar projects throughout the country. The closest is in Austin, where the redevelopment of the vacant, former Mueller airport transformed empty land into a “mixed-use urban village.”

And, indeed, the city’s preferred vendor is the McCann Adams Studio Team, which led the Mueller redevelopment. The site was left empty when the airport moved in 1999. Mueller’s goals are similar to what Chacko lays out. According to the Austin American-Statesman, it’s home to 8,500 residents and has enough jobs for 5,500 employees. City officials hope to support 14,000 jobs at the development in the coming years. (About 1,550 homes are priced below market rate.)

They will need to move quickly. Opportunity Zones have deadlines. Even though the IRS has extended some of those deadlines because of the pandemic, with each year that passes, those tax breaks are less sweet. The first deadline — for a 15 percent capital gains tax break — already passed with the end of 2019. The next big investment deadline — to realize a 10 percent capital gains tax break on money invested in an opportunity zone — is June 2021.

“The size of this project demands that we don’t rely on any one tool to facilitate implementation,” Chacko said. “Opportunity Zones have certain time-bound restrictions that would need to be extended in order to provide sufficient leverage for this long-term project.”

In the meantime, the City Council must approve the spend for the master plan, the vendor must be selected, a master plan must be completed and approved, the city must attract investors, and the deal needs to be finalized. The master plan alone is expected to take 18 months.

That said, it’s a tantalizing opportunity—if the city can pull it off.