The city of Dallas is now being sued to remove Shingle Mountain and rezone the properties the giant mound occupies. Marsha Jackson, the homeowner who lives adjacent to the 70,000-ton pile of asphalt roofing shingles, filed the lawsuit against the landowner and the operator in April. After a failed effort by the defendants to have it dismissed, the lawsuit was amended earlier this month to include the city of Dallas. It’s the first time the city has been sued over it.

The lawsuit acknowledges the role of the site’s operator and the landowner, who, it alleges, joined together to create an illegal shingle dump near the McCommas Bluff Landfill to collect dumping fees from contractors who didn’t want to wait in line at the city landfill. The dump is now Jackson’s neighbor, and has been for nearly three years. The main pile is estimated to be between 60 and 100 feet tall.

But the suit blames the city for its existence. It says existing deed restrictions should have blocked the city from issuing a certificate of occupancy, but the operators got one anyway. The city didn’t require the operator to get a special use permit or even have a site plan, it alleges. More broadly, it says the city’s zoning purposely steers similar sites to Black and Latino neighborhoods and, despite having removed other large polluters away from nearby developments like Trinity Groves, has refused to do the same for Shingle Mountain.

“The City Council does not take zoning and permitting actions that contribute to the presence of illegal landfill uses in or adjacent to predominantly White non-Hispanic residential single-family neighborhoods,” reads the suit. “The City does not issue permits in violation of deed restrictions and does not impose heavy industrial zoning adjacent to single family homes in predominantly White non-Hispanic residential neighborhoods.”

In January of 2018, Blue Star Recycling opened for business on two tracts of land separated by a small creek next to Jackson’s home of more than two decades. Earlier this year, we learned that Blue Star’s founder, Chris Ganter, had worked on the roof for a man named Cabe Chadick. Ganter wanted a site to buy roofing shingles from contractors, then grind them and sell them to municipalities and other government agencies for use in roads and other surfaces.

Chadick told a court in February that he bought the land through his company, CCR Equity Holdings Five, LLC, and leased it to Ganter but didn’t pay much attention to what went on there. The lawsuit alleges something different: “CCR through the actions of Cabe Chadick bought this property for the express purpose of leasing it to Blue Star Recycling and for the express purpose of accepting the disposal of solid waste at the site.”

And that’s what it did. It grew and grew and grew, faster than Ganter could sell it. And by the time the state realized that the massive mound of fiberglass-based shingles was clogging the creek, it was too late. It’s been there, towering over Marsha Jackson’s home, ever since. (Chadick has denied colluding with Ganter.) 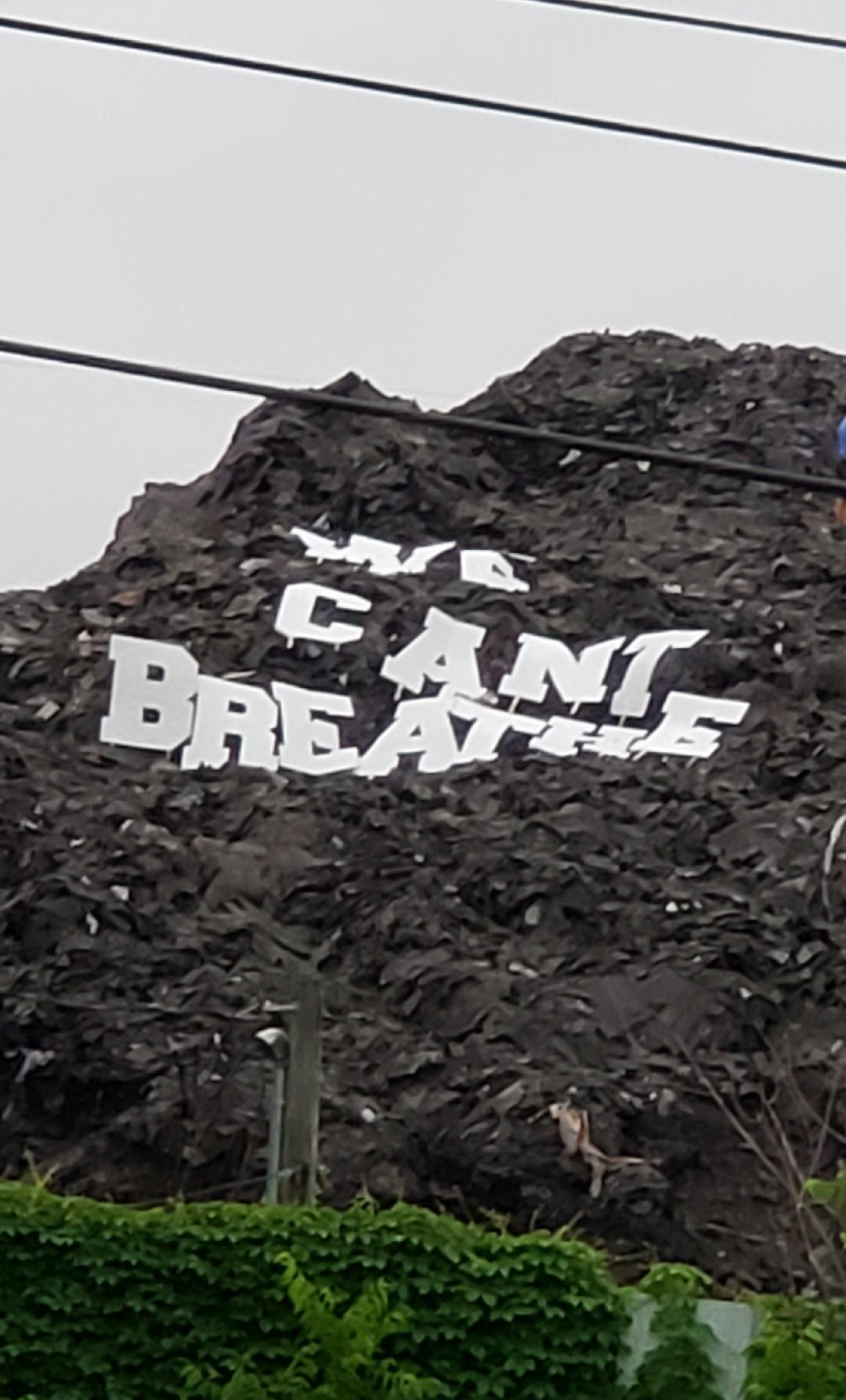 A sign on Shingle Mountain, placed there to get the city’s attention. (Courtesy: Jim Schermbeck)

On Wednesday, Jackson said her health has gotten worse. Last week, she said her skin broke out and she thought she was having a reaction to medicine. Her doctor told her it was likely from the fiberglass blowing in the air outside her home. After she walks her dog, she returns home with a headache. She says she can’t leave her home without a long-sleeved shirt or jacket and a mask. Her 12-year-old granddaughter doesn’t leave the house because the air irritates her asthma.

“My hands were blistered. They were bumped up like they had mumps or something, really itching and irritated,” she says. “That’s the fiberglass that’s blowing. We can’t even be outside in our own yard. We’re just living in a hellhole and the city is turning their back on us.”

The city sued Blue Star in December 2018. In November 2019, Judge Gena Slaughter ruled that the company had to clean up the site and fined it $1,000 a day for each day of noncompliance. But Ganter had left the company, and his second in command, Carl Orrell, maintained that Blue Star was bankrupt.

In February of this year, the city went after CCR and Chadick, who told the city he had three bids to remove the shingles but didn’t want to pay the tipping fees at the landfill. The city didn’t go for that. It’s now July and Jackson says some trucks show up sometimes, but nothing ever gets removed. “They were just spreading it around on the ground to make it look like they were moving some of that fiberglass,” she says.

The lawsuit pins the city to the wall on allowing this operation, but it also alleges broader discrimination via zoning that shows a “consistent pattern of actions of City decision-makers (who) have imposed much greater harm on people of color than on Whites.” For example, the city allocated $2.5 million in bond dollars to relocate the Argos Ready Mix concrete batch plant a few miles down Singleton Boulevard because it was an eyesore for the Trinity Groves development.

It cites the City Council agreeing to spend $1 million from the general fund to remove lead soil contamination ahead of the construction of downtown’s Belo Garden park. More directly, the lawsuit explores the way another shingle process plant—Southwest Shingle—obtained its special use permit. Unlike Blue Star, Southwest wasn’t located near any homes like Marsha Jackson’s. It appears its process for obtaining that permit was more rigorous and its site had no deed restrictions.

The lawsuit is basically arguing that the city screwed this up and left Jackson and her neighbors with little recourse. More broadly, it alleges the city has prioritized Black and Latino neighborhoods as sites for polluters. Meanwhile, the city’s lawsuit against the operators has gone nowhere and Marsha Jackson still can’t go outside. The city is exploring rezoning this part of Dallas, which includes 23 homes. Three of those are in Shingle Mountain’s immediate vicinity. But the mountain will still have to be removed.

Jackson hopes the city will place a lien on the property to take it over and clean it up. She’s heard there’s money set aside in the budget for this, but nobody can tell her how much.

The lawsuit’s desire is clear, however: “the city has the authority to enter onto the Shingle Mountain site and remove the illegally stored waste but has not done so,” it reads. And Jackson says she is in pain from breathing in the dust from the pile of shingles.

“We can’t breathe; that is the truth,” Jackson says. “I can’t even have a conversation without my voice quaking.”