Each of Dallas’ protests against systemic racism and police brutality chant the following call-and-response:

“All lives can’t matter till what?”

You will also hear, in response: “Black! Trans! Matter!” and “Black! Queers! Matter!” These answers are a reminder to remember Black LGBTQIA+ people, who disproportionately bear the brunt of hate crimes and violence. Just yesterday, a 22-year-old Black transgender woman was shot dead in East Oak Cliff. Between 2018 and 2019, Muhlaysia Booker, Brittany White, and Chynal Lyndsay were all found dead in Dallas.

This reminder was manifest, in a somber yet sanguine, colorful, and glorious display, this past Sunday. A crowd of about a thousand gathered at Turtle Creek Park for the Support Pride/BLM rally and march. Like in many large cities across the United States, where official Pride marches were canceled due to COVID-19 concerns, Dallas’ Pride event was organized through grassroots efforts. Held in support of Black lives, the chorus was “all lives can’t matter until Black lives matter, but Black lives can’t matter until Black trans and queer lives matter.” For many, that refrain—and the grassroots approach to the march—represented a return to Pride’s roots.

“Stonewall was a riot, and it was started by [Marsha P. Johnson,] a Black trans girl,” Jorge Gallegos said as we marched down Cedar Springs Road through Oak Lawn, Dallas’ traditional gayborhood. “This is the best way for us to honor the movement. And if all Black lives matter, we need to include all of them: queer lives, queer Blacks, trans people.”

June, of course, is Pride month. June 28 marks the anniversary of the 1969 Stonewall riots, which sparked the gay liberation movement. As members of the LGBTQIA+ community have gradually gained acceptance, rights, and protections in the 51 years since Stonewall, Pride events have become more celebratory. But in light of recent incidents—the police murders of George Floyd, Breonna Taylor, and Rayshard Brooks; the suspected lynching of Robert Fuller; the recent murders of Black trans women Riah Taylor and Dominique “Rem’Mie” Fells—protests against systemic racism and police brutality, rather than Pride events, have taken center stage this June.

“It is so intriguing that all of these events, basically all of these riots for George Floyd and Breonna Taylor, are happening in the midst of Pride month,” says Kolby Campbell, an organizer of Not My Son, a local civil rights organization that participated in Sunday’s Pride event. “Basically, Pride was dismantled for this year because of COVID. However, there are so many people that are a part of this community that have banded to show support and solidarity for [the Black Lives Matter] movement.”

“At the end of the day, we are ready to put down our rainbow flags to pick up the Black Lives Matter flag,” Campbell, who is gay, continued. “We are ready to walk hand in hand to make sure that Black people are getting the same change that the LGBTQIA community got to get … At the end of the day, I just feel like it’s so imperative that the link between Pride and this current Black Lives Matter movement is recognized. Because we’re still finding our way to celebrate Pride. But we’re doing it in a different fashion; we’re doing it in a different color.” 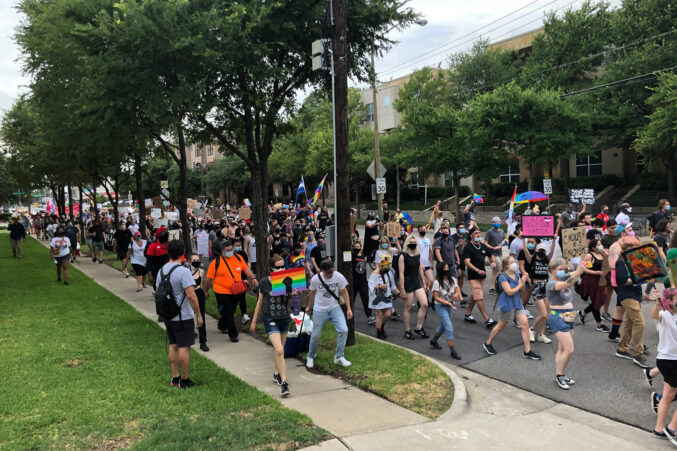 About 1,000 people walked through Oak Lawn on June 28, 2020, in support of Black Lives Matter and Pride month. (Photo by Trace Miller)

Campbell and Krista De La Rosa, a Black trans woman from Dallas who helped organize Sunday’s rally, explain that, when one says “Black lives matter,” that oftentimes excludes queer and trans Black lives. Campbell admits that, sadly, bias still exists in certain corners—especially White corners—of the LGBTQIA+ community. And De La Rosa describes how growing up gay, bi, lesbian, or trans in the Black community can be difficult because “it’s not typical in our culture” and “our families don’t really support us or give us the support that we need.”

“So our message today is just simply, if we’re out here saying Black lives matter, [we need] to include our trans brothers and sisters as well in that community,” De La Rosa said after the march.

Before marching, Dallas activists and event organizers shared words. C.D. Kirven, a veteran Black and gay civil rights activist, discussed being an ally and intersectionality. Kirven highlighted the power of voting. Mieko Hicks, a Black trans woman and a host of TransFusion Radio, spoke of the nigh-unspeakable dangers that Black trans women face daily—violence from both members of the public (especially for being trans) and from the police (especially for being Black).

Qualified immunity—the Supreme Court ruling protecting police officers from prosecution—has been criticized in the wake of recent officer-involved shootings and other incidents of police brutality. Similar, but largely unknown, is the so-called “gay/trans panic defense” or “LGBTQ+ ‘panic’ defense” which the LGBT Bar defines as “a legal strategy that asks a jury to find… a victim’s sexual orientation or gender identity/expression… to blame for a defendant’s violent reaction, including murder.”

In other words, if a man unknowingly goes on a date with a trans woman, realizes she’s trans, then murders her, he can claim temporary insanity or diminished capacity as a defense of his violent action; he can claim that the “sexual proposition by the victim—due to their sexual orientation or gender identity—triggered a nervous breakdown.” The bar says the defense was most recently used in 2018 to downgrade a murder charge to manslaughter.

The defense is not a freestanding defense, but it is instead used to “bolster” other defenses to try to knock a murder charge down to something less, like manslaughter. It’s rare and, historically, rather ineffective. Bills to ban it have been passed in just 10 states. It has been introduced in nine others, including Texas, and in Congress, but has yet to pass there.

Pride and Black Lives Matter should coexist because racism and normalizing the gay community constitute the two biggest issues we face today, she argued.

The march itself, which took off at around 7 p.m. after about an hour of speeches, passed peacefully and almost without incident. At the intersection of Cedar Springs and Oak Lawn, at around 8:15 p.m. a group of men from Christ Forgiveness Ministries accosted the march with megaphones and signs, calling for all to repent, claiming that the founders of Black Lives Matter practice witchcraft, rebuking lesbians in the name of Jesus, and warning of God’s punishment for “sodomy” and “fornication.” They followed the march back to Turtle Creek Park, where they stood on a corner and continued to preach for hours. In response, protesters turned the music up and had a dance party.

“Every night!” they cheered. “Every fucking night!”

The Dallas Pride Parade Is Moving to Fair Park