Above all, North Texas is fortunate to have architecture critic Mark Lamster writing in the pages of the Dallas Morning News. I want to make that clear. There are too many large American cities that don’t have a voice like his helping readers understand how their lives are shaped by the concrete poured around them.

In January, when he argued that it is time to close the Triple Overpass and create a space dedicated to confronting racism, I thought he was nutty. It took me a few months. I went back and reread that piece earlier this week and now see how prescient it was. It’s a stunning idea, actually. And Dallas should explore it.

Today, Lamster published a story about the old Dawson State Jail and what the Trinity Park Conservancy plans to do with it (and with a new park on the banks of the river). “It will take quite a bit of imagination to remake Dawson,” Lamster wrote, “which is not so much a work of architecture as an obscenity in three dimensions.” Read the piece. It’s sharp and insightful.

But now I want to pick on something. Last weekend, the DMN published in print Lamster’s story about the Rolex building. I’m not sure what happened. Maybe Lamster, like the rest of us sometimes do, was having a bad pandemic day when he wrote it. I’m not saying the piece was bad. Not at all. It’s just that Lamster made some interesting choices, the sort of choices that suggest the consumption of gin for breakfast.

Rather than write a straight-ahead story about this cool building (a wall around part of the building was constructed with traditional Japanese methods by a 15th-generation stonemason), Lamster instead concocted this notion that the building could serve as the headquarters for five superheroes, which superheroes he then invented. One of them is Trinity, whose superpower is spraying toxic water. Another is Pegasus, whose superpower is transforming into a flying horse.

So then the review of the Rolex building is written as a conversation between Peg and a real estate agent giving the superhero horse a tour of the potential new headquarters.

I’ll say this: it’s the most imaginative thing I can remember seeing in the paper. But I think if I were Lamster’s editor, when he brought me the idea, I would have said, “Mark, buddy, we’re all struggling to get through this thing. Having kids quarantined during the summer really sucks. I myself broke down and got a kitten for my daughter after she’d been begging for one for months and months. It’s a female. I wanted to name the kitten Longform. But my daughter named it John. Then, after about 24 hours, my daughter said she wanted John out of the house because she doesn’t get along well with our dog. Yeah, we have a dog. Anyway, have you been drinking gin for breakfast? I’m not going to pay to illustrate these five superheroes of yours. I’d rather see pictures of this cool wall built by the 15th-generation stonemason.”

I like the effort. Sometimes you have to shoot your shot. But I don’t think this one drew iron. 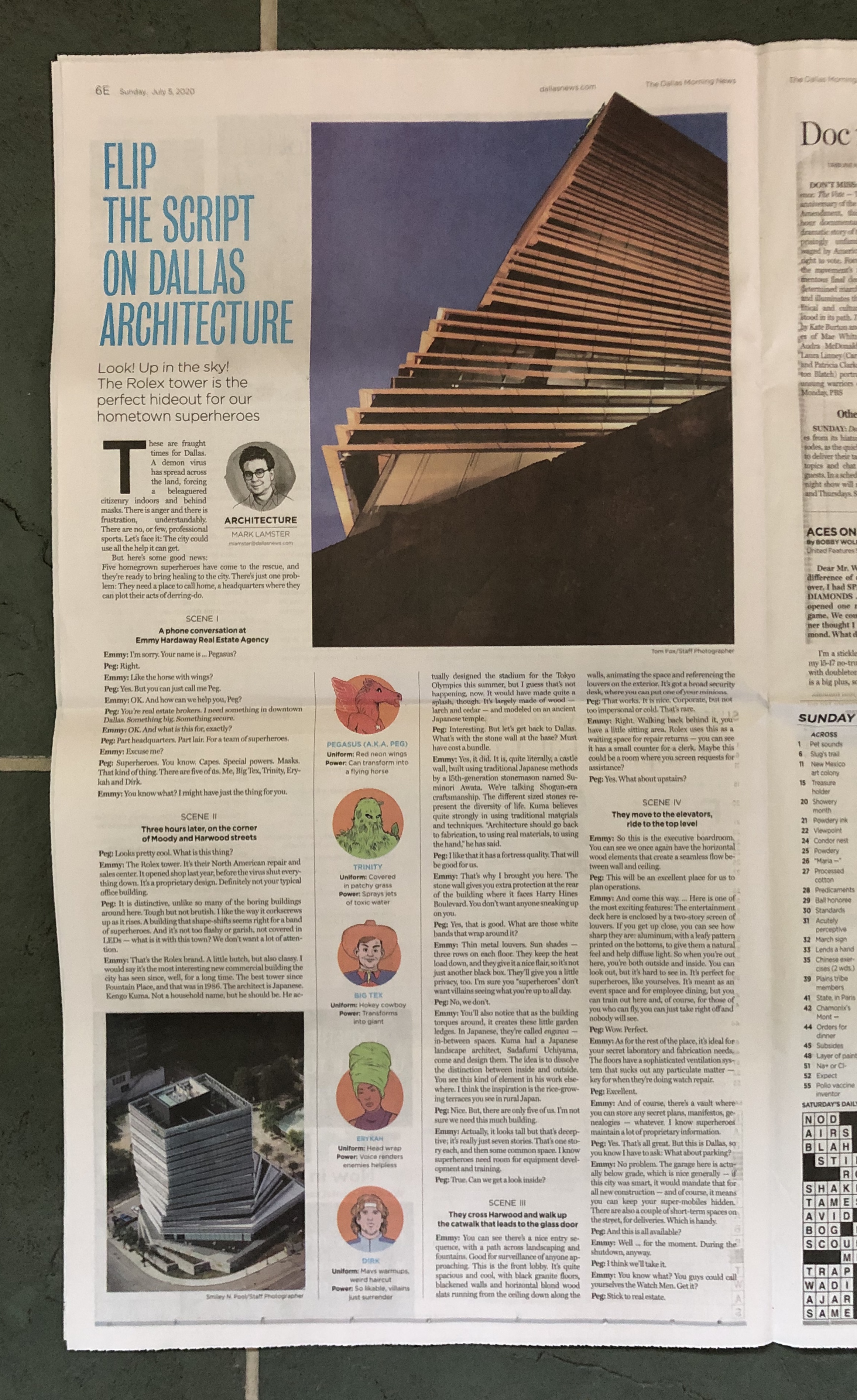 Not horrible, I suppose. Again, though, I’d really like to see more pictures of the stuff that the real estate agent is showing Peg. Also, I’m curious why the illustrator wasn’t credited. Same thing on the online version. If you invent superheroes and have somebody draw them, that person usually gets his or her name in the paper.

Oh, speaking of online, here’s how the story looked on a phone. The text is interrupted every three paragraphs or so with an ad. When those graphs are short, the result is godawful. Well, unless you’re looking to date an Asian girl, I guess:

I don’t know. Maybe the advertising people at the DMN are drinking at breakfast, too. It would be understandable.

Dallas’ most important news stories of the week, delivered to your inbox each Sunday.
Mark Lamster

The North Texas leader grew his Humphreys & Partners to be the largest apartment design firm in the country.
By Brandon J. Call
Nature and Environment

This is ugly.
By Tim Rogers
Faces of Influence