On Friday afternoon, at a specially called meeting of the Dallas City Council, 213 public speakers signed up to air their grievances. Over the course of almost five hours, just two people spoke in support of the police.

Since Tuesday, demonstrations have been peaceful, but last weekend was filled with tear gas and violence. A man lost his eye and seven teeth after being shot with what appeared to be a sponge bullet, a “less lethal” form of crowd control that police used on peaceful protesters throughout the weekend. Another man had his jaw broken by a cork bullet fired by an officer with either the Irving or Garland police departments; that’s still under investigation. A curfew was initiated Sunday, and 124 people who violated it were shuttled to Lew Sterrett. Some were filmed being thrown to the concrete before their arrest. Then, on Monday, 674 marchers were corralled after walking onto the Margaret Hunt Hill Bridge and shot with sponge rounds and detained.

For the public speakers yesterday, those wounds were still fresh, even if the last few days have been quiet and meaningful.

“Blinding us instead of killing us is not progress,” said Ben Struby.

“I am now terrified to be a vocal member of my community,” said Jesse Solis.

“I have been horrified by what I’ve seen in our city,” said Allison MacMahon.

“For the past 50 years, Dallas has had one of the most unaccountable police forces in this country,” said longtime activist John Fullinwider, on behalf of Mothers Against Police Violence, after naming eight people who had been shot and killed by Dallas officers since 1970. None of the cases he named ended with a murder conviction. “We have to find another way.”

“One of my main concerns in the response by DPD is the amount of trauma they’ve created in this community. I’ve had countless calls from people with depressive symptoms, anxiety attacks,” said Zandra Ellis, a co-founder of the mental health advocacy nonprofit Foundation 45.

These speakers were in pain. Some cried. Others described 7-inch welts on their thighs from being shot with sponge rounds during Monday’s mass detainment. Their voices shook through their allotted minute and a half. Some spoke of watching in horror from the safety of their downtown apartments as protesters were fired upon and taken into custody. They called for Police Chief U. Reneé Hall to be fired. Like public comment in many other cities, they demanded that City Council defund the police department and reinvest those dollars into communities of color. Later, three council members expressed being open to the idea in some form.

The voices were a contrast to the day’s peaceful events: a mourning at City Hall, culminating in an 8 minute and 46 second silence at 8:46 a.m., in honor of the amount of time Minneapolis Ofc. Derek Chauvin held his knee to George Floyd’s neck. Faith leaders led the day in prayer, and Mayor Eric Johnson and Congresswoman Eddie Bernice Johnson spoke.

“Racism is not new to this country,” Congresswoman Johnson said. “It’s a part of the fabric. I have lived it for 80-some years. But let me say this. We’re not going to live in peace until we come to grips with racism. … I want to tell you what’s on my heart. The first term that I was in public office, my first interim study was to study race relations in policing. Nothing has changed.” 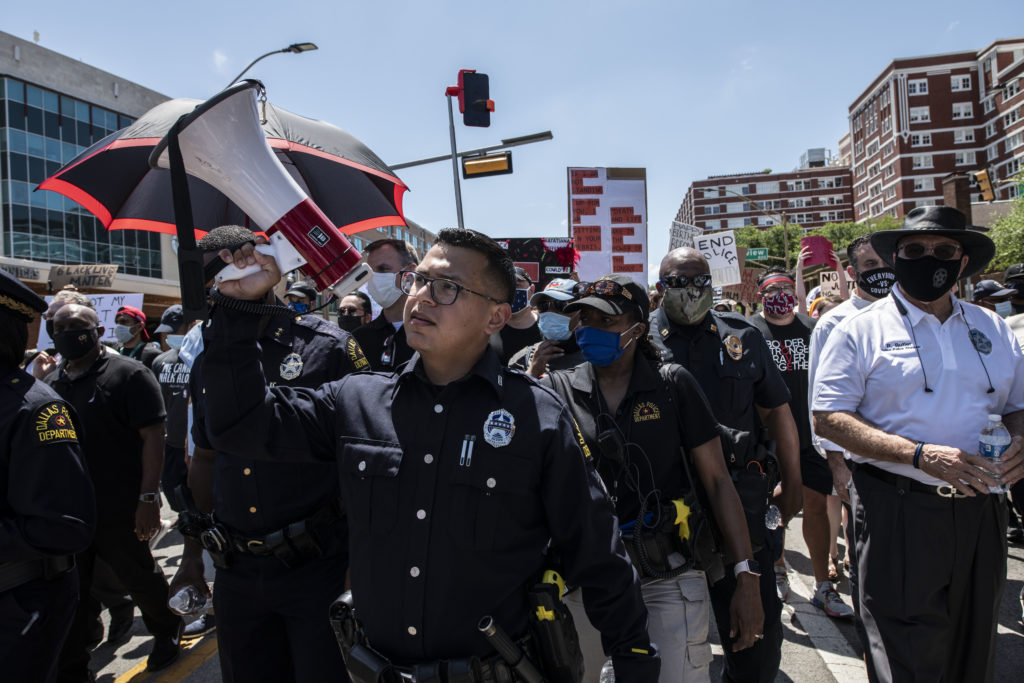 At 11 a.m., a Blue Lives for Black Lives Matter event, organized by Dallas Ofc. Arturo Martinez, kicked off at police headquarters, on Lamar. They handed out pizza and sandwiches. At least 600 people attended. Two helicopters whirred overhead. Mark Cuban spoke of “change coming from the bottom.” Mavs CEO Cynt Marshall asked us all to look at our neighbor and say, “Every voice matters. Everybody belongs.” Chief Hall said the Minneapolis officer “murdered” Floyd and noted, “We watched it. We have to own it. We have to acknowledge it. And we have to fix it.” City Manager T.C. Broadnax repeated portions of a speech from earlier in the week, telling protesters that he’s just like them when he takes off his suit. He still walks his neighborhood with his ID on him.

We marched down Lamar, many uniformed police officers walking alongside civilians. We paused in front of the South Side Flats. We said his name: “Botham Jean,” the 26-year-old who was shot and killed in his apartment there by an off-duty police officer. We marched along Griffin to Akard on our way to the City Hall Plaza, where we all took a knee for that 8 minutes and 46 seconds. Hall wept. Police officers spoke passionately in interviews. 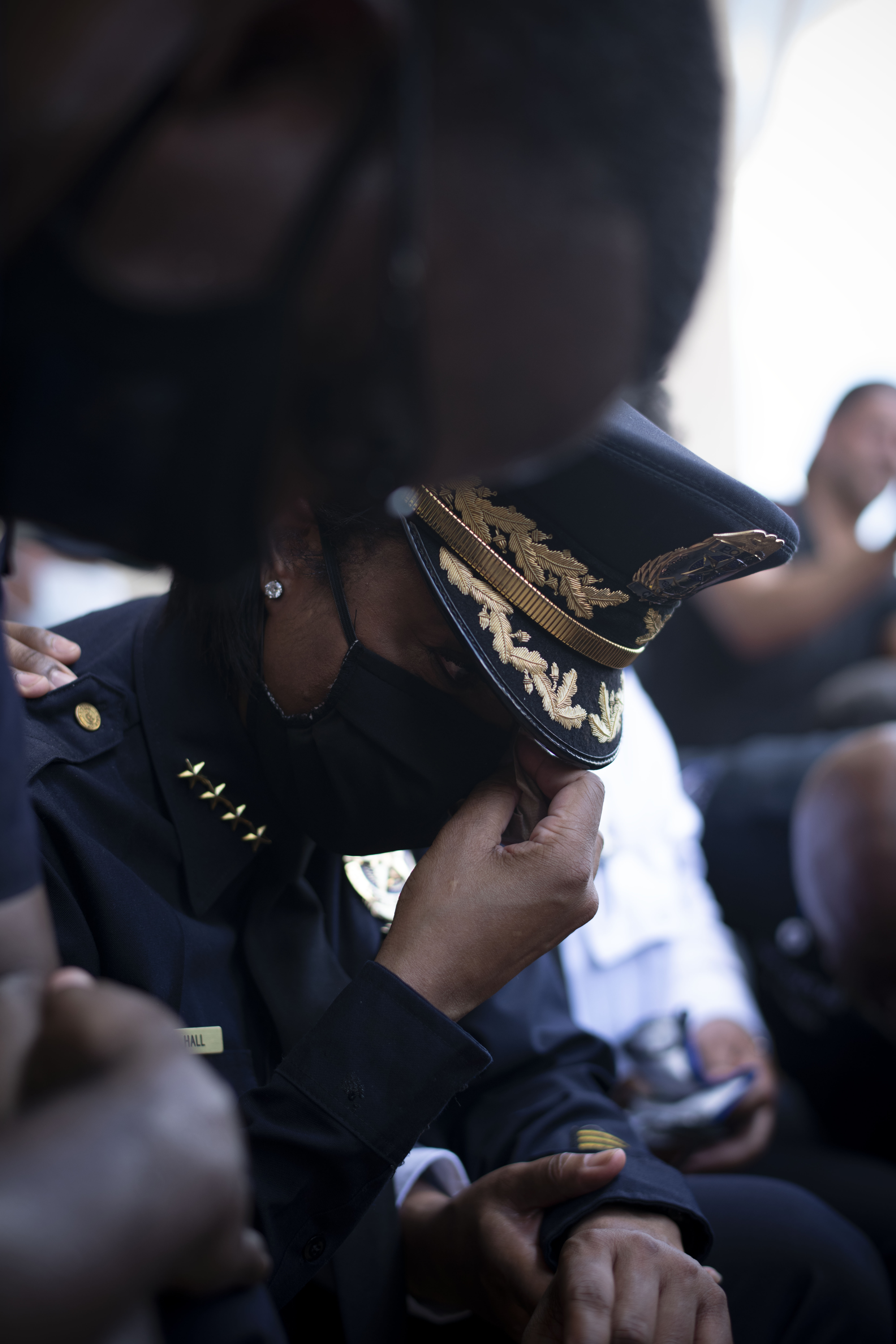 Chief U. Reneé Hall cries while taking a knee in honor of George Floyd at Dallas City Hall Plaza on June 5, 2020 (Photo by Elizabeth Lavin)

“In Minnesota, that guy had, like, 18 complaints. Somebody was complaining on him,” said Cpl. Larry Bankston Jr. “If the people on top don’t do anything about it, the ones that interact with one another, like the patrolmen, they have no power to fire the guy. They can say, ‘I’m not going to answer calls with him because he’s an asshole,’ but the problem with not answering calls with someone you figure is a bad police officer, you’re not giving that officer presence to not do the bad act that he might possibly do. There’s layers to this thing, man.”

These moments of solidarity have fissures. Hours before Friday’s protests, Hall announced that the charges of the 674 protesters Monday night would not be filed. But she defended the actions of her department. “I strongly believe we made the right decisions to deter and disperse the large crowd on the bridge,” she said. “We had to protect the protesters from vehicular injury on a roadway still open to traffic. It was critically important to process protesters and then safely reopen the bridge.”

But the charges for the 124 picked up violating curfew stuck. Ashley Samuel, 30, attended the 11 a.m. protest. The counselor at Kipp Oak Cliff Academy High School said she was held for 29 hours at Lew Sterrett after being arrested for violating curfew Sunday night. She was released at about 5:30 a.m. on Tuesday. “I was told there was going to be a curfew. Which is fine,” Samuel said. “Kids get curfews all the time and it’s a $500 ticket. What I got sent into was a war zone. They held me at Lew Sterrett Justice Center. … [It was] 29 hours of psychological torture. I am shaken, but I am not broken.”

Earlier that day, at the morning event at the City Hall Plaza, Shenita Cleveland waited until council members Tennell Atkins and Omar Narvaez had finished reading a proclamation dedicating the day as George Perry Floyd Remembrance Day. She clutched a megaphone and began yelling at Mayor Eric Johnson. She, too, had been detained on Sunday night and taken to Lew Sterrett. She called for her charges, and those of others arrested for a curfew violation, to be dropped.

“Help us, Mr. Mayor,” she said. “We were handcuffed for seven hours because of your order. Tell the truth!”

The mayor and the Council listened but did not engage, then entered City Hall.

The City Council meeting, later in the day, was a mess. It lasted nearly nine hours and devolved into shouting between the mayor and council members. At one point, the mayor muted two council members and City Manager Broadnax, who tried to step in to defend Chief Hall from Johnson’s line of questioning.

The two men then lectured one another, with Broadnax saying, “I run this city,” and Johnson responding, “You run this city. You don’t run this meeting.” It wasn’t exactly the sort of cooperation and leadership you’d hope for amid uprisings in the streets during a pandemic. Technical glitches made things worse. At least 50 public speakers were declared “not present,” but many have reported that they were either not called or could not get into the system to comment. (We’ll have more on this on Monday.)

“It’s MY job to maintain order in this meeting, and that’s a fact.” – Mayor Eric Johnson

Tension between Dallas’ city manager and the mayor are spilling out during this council meeting.

It appears that the mayor expected more from the police chief. He grilled her about Monday’s incident on the bridge, verifying details from coverage in D Magazine and the Dallas Morning News. Chief Hall would not say whether projectiles were fired on the bridge; none of the officers were wearing bodycams, so she could not verify the claims.

“Just because it was printed in a newspaper does not make it law,” she said. Soon after, a News photographer tweeted a photo of the sponge round he says he was shot with. “It still hurts to sit,” he wrote.

Hall said tear gas was not fired, that it was smoke. She said she ordered the SWAT team to not fire tear gas. Mayor Johnson then wanted to know the chemical breakdown in the smoke. She could not say. Councilman Adam Medrano said he believed the chief’s order to not fire tear gas was disobeyed, because the reactions of those on the bridge was so violent. He demanded that she determine who violated her order.

Broadnax said the chief hasn’t had the time to fully investigate the bridge incident. It was too soon to comment. The chief said violence that erupted around officers on Friday and Saturday of last weekend motivated the decision to fire tear gas and the sponge rounds, adding that a brick nearly hit her. By Sunday, the curfew was meant to stem that violence. Council members Omar Narvaez and Adam Bazaldua called for the chief to drop the charges of the 124 who were rounded up, which included Samuel and Cleveland. They said it wasn’t fair to not pursue the charges of those on the bridge and not those who violated curfew.

City council members Jaime Resendez, of Pleasant Grove, joined Bazaldua in calling for exploring redirecting public safety funds. “Divesting resources from the police department is the only way to go at this time,” Resendez said. “We need to be investing in providing access to higher social, economic, and political power. Because from my perspective, systemic change can only be brought about by combating systemic racism.”

City Councilman Lee Kleinman, who has for years had a prickly relationship with the police unions, wanted to consider eliminating the Police Academy and called for his colleagues to not accept campaign donations or endorsements from police associations. He said it’s a conflict of interest, considering the Council sets the department’s salaries.

Broadnax ended the marathon meeting by detailing immediate and longer-term reforms, which include more face-to-face meetings between the chief and the Community Police Oversight Board; an increase in body cameras and a revamped policy for the release of that footage; implicit bias training; identification of officers with “three or more incidents that may be cause for concern”; a cultural assessment; and more. The decorum between our city leaders was distressing, to say the least. The dysfunction between the city’s highest officials became public at the worst possible time.

There is a lot of work to do to heal the public who called in with their concerns. But if anything, Friday’s events—the interruption of the mayor’s ceremony, the hundreds of public speakers, the City Council infighting—show just how much listening our city’s policymakers still have to do before they can begin that work.