The parking lot of Williams High School in East Plano was mostly pallets of boxes, with a few people in masks and a truck humming nearby. But on the far side of the lot, a line of cars stacked bumper-to-bumper clogged the entries a half hour before the distribution began. Each car–even the ones that look brand new–was here to receive food.

Since the COVID-19 pandemic began, the economy has spiraled into one of America’s worst recessions. Over 2.6 million Texans have filed for unemployment, creating unprecedented demand for food pantries like Minnie’s Food Pantry.

Cheryl “Action” Jackson, who founded Minnie’s in 2008, has felt this crisis acutely. On a normal month, her organization would serve 5,000 people. That’s now up to between 17,000 and 20,000 people each month. She’s also broadened her service. Since schools were closed to curb the spread of the coronavirus, Minnie’s partnered with Plano ISD to provide meals to over 16,000 students on free or reduced meal programs. She’s providing with less; the number of volunteers willing or able to leave their homes to help food pantries has decreased, leaving an overworked operation understaffed at a time of great need.

That Thursday, Jackson gathered the group of scattered volunteers and launched into a pep-talk. The line disappeared out of sight, filling suburban blocks with cars awaiting their boxes.

“Don’t worry,” she told the group. “We’ve done lines like this before.”

A speaker atop a folding table started booming with music. Jackson told them to turn it up.

The distribution is a well-oiled machine. Cars cycled through with their trunks ajar. Masked volunteers directed traffic and loaded food into trunks and truck beds. The slogan on each box of food is a quote from Mother Teresa: “If you can’t feed a hundred, then feed just one.” The volunteers will serve over 400 people within the hour, but Jackson leads them in a chant of that mantra.

Minnie’s has increased these distributions to six days a week since the pandemic began, in addition to the pantry’s normal hours. Jackson has been at every one. And then George Floyd was killed in Minneapolis. 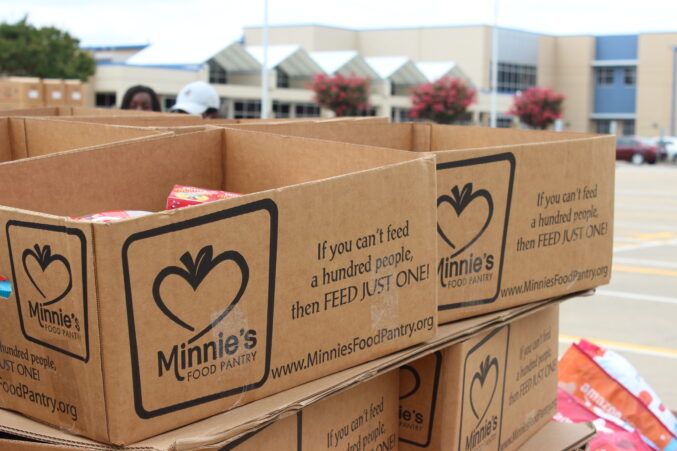 Each box of food that Minnie’s provides carries this quote from Mother Teresa. (Photo by Abby Blasingame)

As if battling America’s hunger crisis wasn’t a big enough challenge, Jackson has also turned her attention toward fighting America’s crisis of racism. On June 7, Jackson hosted a “Hungry for Change” rally in Downtown Plano to remember lives lost to racist violence.

The rally, held on a Sunday afternoon, felt like a  church sermon. Pastors spoke, Hammond sang, and the crowd prayed together. A group holding “Sikhs for Black Lives Matter” signs wheeled coolers through the crowd and handed out water. Women wearing hijabs marched down the brick streets. The 2,000-plus people in attendance were united not by one faith, but by faith in a path forward for Plano.

Robert Jackson, Cheryl Jackson’s son, also took to the stage. Like many Black Americans, Robert has his own stories of negative encounters with the police, including an instance where an officer pulled a gun on him during a traffic stop. But his speech didn’t mention those incidents. Instead, Robert told stories about how Plano officers have brought people committing petty theft to Minnie’s for groceries, rather than arresting them.

After the rally, Merritt invited Jackson to attend George Floyd’s funeral in Houston. There, she spoke with the mother of Ahmaud Arbery. She met the sister of Botham Jean and the sisters of Atatiana Jefferson; both were killed in their homes by police officers in Dallas and Fort Worth. A week later, Jackson was on a last-minute flight to accompany the families and Merritt as they met with the president.

“You can’t write a speech to me about what’s happening in my country and in my own backyard,” Jackson said. “I need to look into your eyes and know that you feel the hurt and pain that I feel like or that I felt when I was with Ahmaud Arbery’s mom. I want you to feel that; that way you’ll have compassion.”

For Cheryl Jackson, the drive to exert herself over these two issues is linked by the common thread of motherhood. Jackson and her husband worked a combined five jobs as a young couple. They still struggled to put food on the table for their two sons. At their income level, they hovered far enough above the poverty line that they were turned away with only a brown bag of beets at the food bank. It wasn’t enough to feed their family.

After her dad died in 2008, Jackson decided to create a legacy for her last living parent. With just two cans of corn and a 600 square foot office, she started Minnie’s Food Pantry. She named it after her mom, Minnie. With the help of Robert, Jackson spent the early days of Minnie’s scrounging for donations. They used their cars until they could afford a larger van.

“We literally started with just a mentality to make a difference in one family and one person’s life and not trying to make it like we’re trying to go feed a million people,” Robert Jackson said. “And now you look up and you’ve provided over 11 million meals and counting.”

Minnie’s does not receive government assistance, so the pantry is able to serve people in the same income gap as she was. She remembered how poorly she was treated when she was in need. That’s why each person she serves literally walks in on a red carpet. While Minnie passed away in 2015, the pantry continues to serve people in her name.

Her legacy lives on. Jackson found a photo of her mother and father at the flagpoles in front of the Plano Municipal Center. They were praying for the city. With Hungry for Change, Cheryl Jackson did the same.

“Put your child’s face or somebody you love where George Floyd’s face was,” Jackson said. “That’ll make you passionate. That’ll make you say change has to happen because it could have been my own sons. And that’s what I thought about.”

Although Jackson approached these issues through a lens of compassion, not everybody reciprocated that sentiment. To her shock, people sent out fake emails claiming the rally was canceled. Others declared they would no longer donate to Minnie’s. Jackson also received emails calling her expletives. “First I became hurt. I mean I had so many emotions. I cried… I said ‘Let’s come together in love and solidarity as a community’ so why are you cursing me out about this?” Jackson said.

Raised as one of seven children in South Dallas, Jackson was never lost in the crowd. As a wobbly toddler learning to walk, she refused to be picked up or hold her parents’ hands. She was determined to do it herself. “She’s kind of taken that mentality and went through life with that, like you know you join me after I’ve proven I can do it but I need to prove that I can do it by myself,” said Jackson’s sister, Lynette Wellington.

For years, Jackson insisted on inviting Oprah to her annual Feed Just One gala. Her friend Shovon Jackson always included Oprah in the seating arrangements with a shrug of skepticism; Oprah’s name would always vanish right before plans were finalized.

That changed in 2018. Oprah finally came for Minnie’s 10th anniversary. “I literally was in awe,” Shovon Jackson said. “She called me and told me I couldn’t tell anybody and I just broke down and started crying. I couldn’t believe it, but I believe that she manifests things.” 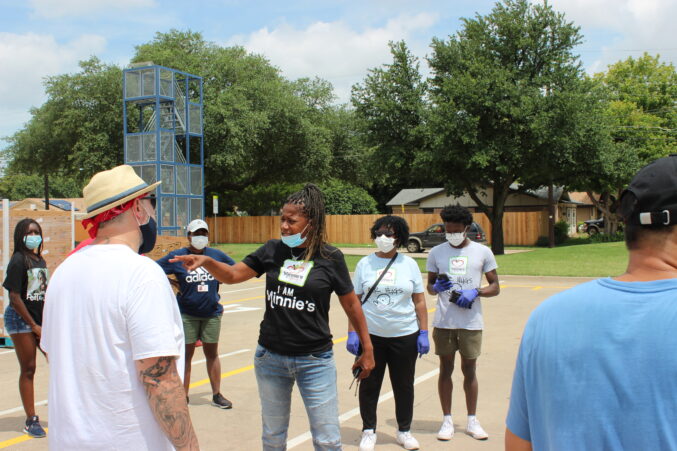 Cheryl Jackson leads a group of volunteers in Plano while distributing food for Minnie’s Food Pantry. (Photo by Abby Blasingame)

It’s what she’s always done: start with a seemingly impossible goal, but operate with a conviction that makes it possible. She has a knack for transforming a stubborn no into a wholehearted yes. Her friends describe this relentless persistence as God-given. The memory of her mom invigorates Jackson. Every effort is a living testimony.

“It’s not even just about feeding people. It’s about literally leaving this world a better place,” Robert Jackson said. “We’ve been doing just that and she’s not gonna stop anytime soon.”

During a recent Thanksgiving, Jackson stayed up the whole night, crying and trying to figure out how to feed those in need of a holiday meal. There are the frequent doctor visits to treat the pain in her back from constantly lifting and moving boxes. And each time she helps, she’s doing so during a pandemic.

“She’s in tune with the needs of people, is the best way I can say that,” Wellington said. “That at the risk of even her being exhausted, tired, getting sick, that she is willing to put it on the line for someone else.”

Jackson doesn’t plan on halting her long march toward justice anytime soon. At the rally, the back of her shirt featured five names. There were George Floyd, Ahmaud Arbery, Breonna Taylor, and Trayvon Martin. The fifth name, Tony Bennett, does not have that familiar ring.

Bennett is Jackson’s brother. He’s been in prison for 29 years on concurrent life sentences for aggravated burglary with a deadly weapon and burglary of a home. Bennett was convicted under the three-strikes law, which has been criticized for its disproportionate effect on minority offenders and imposing life sentences onto people whose actions don’t warrant such punishment.

“I want a chance to make something out of myself,” Bennett wrote in a letter posted on Jackson’s Facebook page. “It’s crazy sis, I’m around murderers and rapists and they don’t have as near as much time as I have.”

Jackson’s new objective is a twist on the quote that is found on each box of food she gives to hungry people in the community.