A disquieting scene unfolded last night as a peaceful rally morphed into a controversial mass detention after Dallas police and state troopers surrounded hundreds of demonstrators trying to march across the Margaret Hunt Hill Bridge. It was the fourth consecutive night of demonstrations to condemn police brutality and commemorate the countless victims of police violence, and the second night on which there were no violent incidents originating from the protestors.

But as about 500 marchers reached the middle of the bridge, they met a wall of police in riot gear. Smoke bombs and sponge bullets and zip ties weren’t far off.

The rally, organized by activist Dominique Alexander’s Next Generation Action Network, was originally planned for 6:30 p.m. at the Dallas Police Department’s headquarters, in the Cedars. But it became clear that Dallas police and state troopers were planning to rigidly enforce the downtown area’s 7 p.m. curfew.

Essentially all vehicular access to the headquarters was cut off . So the rally was moved at the last minute to the Frank Crowley Courthouse on Riverfront, just outside the curfew zone. Later, County Judge Clay Jenkins said he reached an agreement with Alexander that would protect the protestors so long as they stayed on county property. He couldn’t guarantee their safety if they left it.

“Mind you,” Alexander said, as Dallas police, National Guard, and state troopers looked on, across the street. “With us coming to this location, I would not put anybody in danger. Of course, I’m going to get myself advised, and I’m going to ask the city of Dallas for verification on their zone. So, as you see those Teletubbies [i.e. law enforcement officers dressed in riot gear], they’re designed to make you be scared. But we want them to know that we’re not scared.”

“Police starts riots,” he added, “not protestors. People who stand in the way of our rights are the ones who start riots.”

The day started calmly, with a bullhorn and encouragement for fellow protestors to share their story through a PA system. Before the detainments, many who attended seemed nervous to use their full names. But their messages were aligned.

Katie, a young protestor wearing goggles and bearing an umbrella reading “STOP SYSTEMIC RACISM,” said she attended the rally to raise her voice against police violence: “Cops are brutally attacking black people for absolutely no reason except for racism, and it’s got to stop. Plain and simple.”

Carl Alberto, an ER nurse bearing a sign reading “FRONTLINERS STAND WITH BLACK LIVES MATTER,” said, “I want to be here in support of every race—especially the black community, right now, because obviously we’re seeing a lot more injustice against the black community.” He hoped for a peaceful protest: “If we can’t control the government, we can at least control ourselves, and show that we can do it peacefully.” He stressed that he believes police often serve and protect. He also couldn’t help but worry about the spread of COVID-19 via these large protests.

Just before 8:45 p.m., protestors started heading north, on Riverfront. It’s unclear if Alexander communicated with this city about this move. While he coordinated with the county regarding the rally, he did not communicate about the march. Many of the protestors filed in with the crowd, though it’s not clear whether a majority knew they were headed for the bridge. They didn’t know what they were walking into. 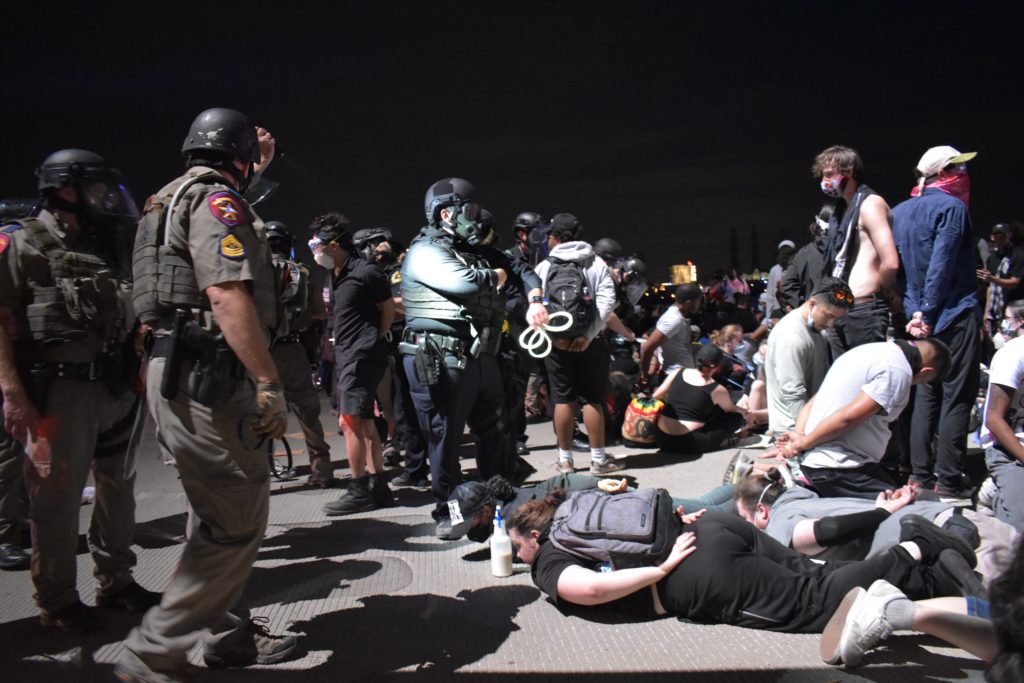 When demonstrators reached the intersection of Riverfront Boulevard and Woodall Rodgers, they pushed past a light police barricade, which was basically a few officers and their cars, and proceeded onto the Margaret Hunt Hill Bridge, on their way into West Dallas. Some protestors said that cops had blocked off other ways around the bridge once the march headed up the ramp.

“It was like we had to go up there,” said protestor Isabell Wyatt.

Police officers in riot gear blocked the bridge running west. Protestors knelt before the police line, raised their hands, and chanted, “Hands up! Don’t shoot!” It was about 9 p.m. It’s difficult to say exactly how the chain of events unfolded. Officers fired pepper balls (i.e. paintballs filled with Mace); a few protestors chucked a water bottle or two. Then came the smoke. Protestors retreated, about-faced, and resumed chanting. They were met with a hail of pepper balls and smoke canisters, which loudly pinged and ricocheted against the bridge’s metal suspension. The few protestors who responded by hurling water bottles were shouted down by the majority of protestors, who hoped to salvage the remaining peace.

Again, protestors about-faced. Again, they kneeled and resumed chanting. Again, they were met with a hail of pepper balls and smoke. (Some protestors maintained they were hit with tear gas; the police department said its officers only fired smoke.) They were pushed farther back, slowly. But a new police line suddenly appeared behind them, blocking the bridge running east. They were trapped.

The police and troopers advancing from the west then ordered everyone to lie on the ground. Protestors amplified the command, even as another pepper-ball shot rang out. State troopers reached the front line of protestors and started zip-tying their hands behind their backs. It was 9:10 p.m. They would be here past midnight.

“All right, guys, listen!” an officer shouted into the loudspeaker. “Listen up!”

“Fuck you!” a protestor, on the ground, shouted.

“Hey, quiet down!” another protestor yelled.

“You will not get hurt,” the officer continued. “You will be handcuffed. Everybody just breathe. Everybody’s going to be OK.”

“No, we’re not OK,” a protestor responded, into a megaphone, as other protestors frantically texted or called family or friends.

“You will be taken into custody, one by one,” the officer went on. “Relax. Breathe. Nobody’s going to harm you.”

By now, there was almost silence, except for the buzz of choppers overhead. By about 10 p.m., law enforcement officials had detained hundreds of people, including my sister. State troopers cuffed her at 9:30 p.m. Ten minutes later, they moved her to a group of female detainees. Twenty minutes after that—almost an hour after they’d started detaining demonstrators—the police started separating juveniles from adults.

The eerie scene was chaotic and poorly organized. Groups of men, women, and juvenile detainees lined the highway. One line had their backs to the wall while another line faced them. Nobody, not even the police, appeared to comprehend the situation. State troopers, when pressed, maintained they were assisting Dallas police by handcuffing and searching bags. They believed that detainees were headed to the Lew Sterrett Justice Center, packed into one of two DART buses that the city manager had purchased off the auction block ahead of Sunday’s curfew.

A Dallas police sergeant told me he believed that jails were full; they were processing detainees on the bridge so that they could be transported—in those DART busses or vans driven by police—to Frank Crowley, and released to their cars.

It wasn’t immediately clear what charges detainees were facing. One officer told me that detainees faced charges of a class C misdemeanor of obstructing a highway. Another officer told me that they faced charges of a class B misdemeanor. Some of the protestors say they were told they were being arrested for violating curfew, despite the bridge being outside the curfew zone. News reports revealed that District Attorney John Creuzot told the police chief that he would not prosecute the detained; he later said they would not be jailed, but that he would allow police to ticket at their discretion.

There was little clarity at any level — not among the detainees, on up to the police and state troopers.

“The whole thing was peaceful. We are still peaceful,” said protestor Simone Bolton, who sat with her hands zip tied behind her back. “We’re not angry. We’re not upset. We just want them to let us do what our rights are, which is to protest peacefully. We’re not making a ruckus. We’re not doing anything wrong. These are our rights. For us to be sitting here for hours? No one has any weapons or anything.”

Protests are planned to continue this week. Wyatt, the protestor, was undeterred, despite seeing a fellow protestor have a seizure while awaiting transport in the DART bus. She said she’ll be attending more.

Matt Goodman contributed to this report.