The long-awaited master plan for the future of Fair Park sailed through the Park Board Thursday afternoon unanimously. The construction is divided into four phases and will take up to 20 years to complete, pending funding. But the important phase is the first one. The Park Board was promised three parks in the next five years, including the long-awaited community park at the eastern end of the 277-acre property.

Located near Fitzhugh and Lagow Street, the 14-acre community park will exist outside of what planners refer to as the “pay fence,” meaning it can be accessed by folks for free, even while events like the State Fair of Texas are taking place. This corner was once a residential neighborhood of Black homeowners, until it was stolen by the city through eminent domain and demolished for State Fair parking so White attendees didn’t have to see who lived nearby. The decision has crippled the surrounding neighborhoods for generations, leaving empty parking lots as markers of the policy’s brutality.

The plan removes 800,000 square feet of concrete and blacktop—about a quarter mile in total—and adds 52 acres of expanded green space throughout the park. A 1.5-mile loop trail will occupy the middle of the park. There are plans to plant 65,000 square feet of native plants and blackland prairie grasses along Pennsylvania Avenue. There are other additions: an expanded plaza outside the Cotton Bowl, a park linking the cultural centers, a privately funded hotel and retail development near Exposition. Perkins and Will is responsible for the master plan, under the direction of governing nonprofit Fair Park First. You can look at it in full here.

We’ll have more analysis in the coming weeks. For now, let’s walk through some major takeaways. 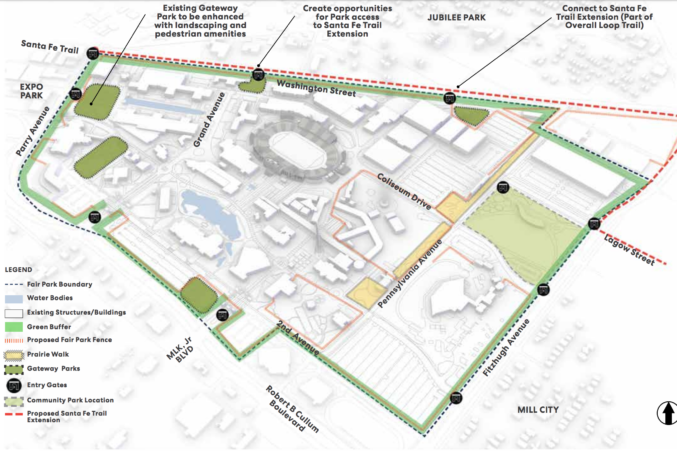 A full look at the future parks under the new Fair Park master plan.

Including the community park, there are six total throughout Fair Park. (I will apologize now for typing “park” so much.) The two most significant are the aforementioned 14-acre community park and what’s being called the Music Green, a rectangular grassed plaza lined with trees that will be the connective tissue between the Music Hall, the Hall of Religion, the Magnolia Lounge, and the African American Museum.

The community park was the major concern for policymakers and the surrounding neighborhoods. Fair Park feels walled off even when events aren’t happening. Brian Luallen is the executive director of Fair Park First, the nonprofit that’s making sure this master plan gets funded and comes to life. As he put it, “Fair Park should not and will not have a front door or a back door.”

The specifics are conceptual, but the plans are not. Fair Park First and its partner In the City For Good conducted nearly 900 conversations over three community meetings and 24 neighborhood gatherings in the three ZIP codes that neighbor the park. About 65 percent of the attendees selected the Fitzhugh and Lagow location. And they want it to provide wifi.

“There is a huge digital divide in the surrounding areas and we hope to be able to remedy some of that,” Luallen said, without getting too specific given the early stage of planning. 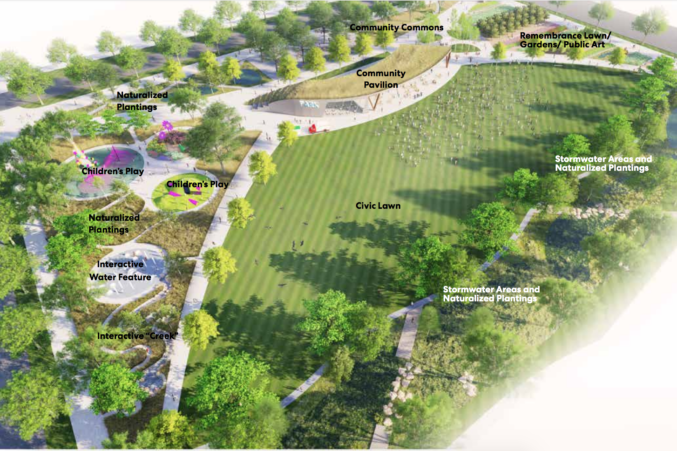 A rendering of the Community Park at Fair Park.

The community wants splash pads and all-ability playgrounds and recreation opportunities. They want a performance area, as the venues inside the park are often booked up privately. They want space to lie out and places to have picnics and grill. There should be a trail and a dog park and restrooms. Luallen said these are all part of the ultimate vision for the community park.

There is a planned area for a remembrance lawn, and the organization will solicit ideas for public art, memorializing the neighborhood that was here before the city and the State Fair took it away. But the centerpiece is the civic lawn, 10 acres of green space where a thousand people take up maybe a fifth of it. It’s near the Dos Equis Pavilion, but Luallen was hopeful that design will include a berm of trees that could help dull the noise that has long poured into the surrounding neighborhoods from the amphitheater. (Again, no specifics there. Too early, he said.) 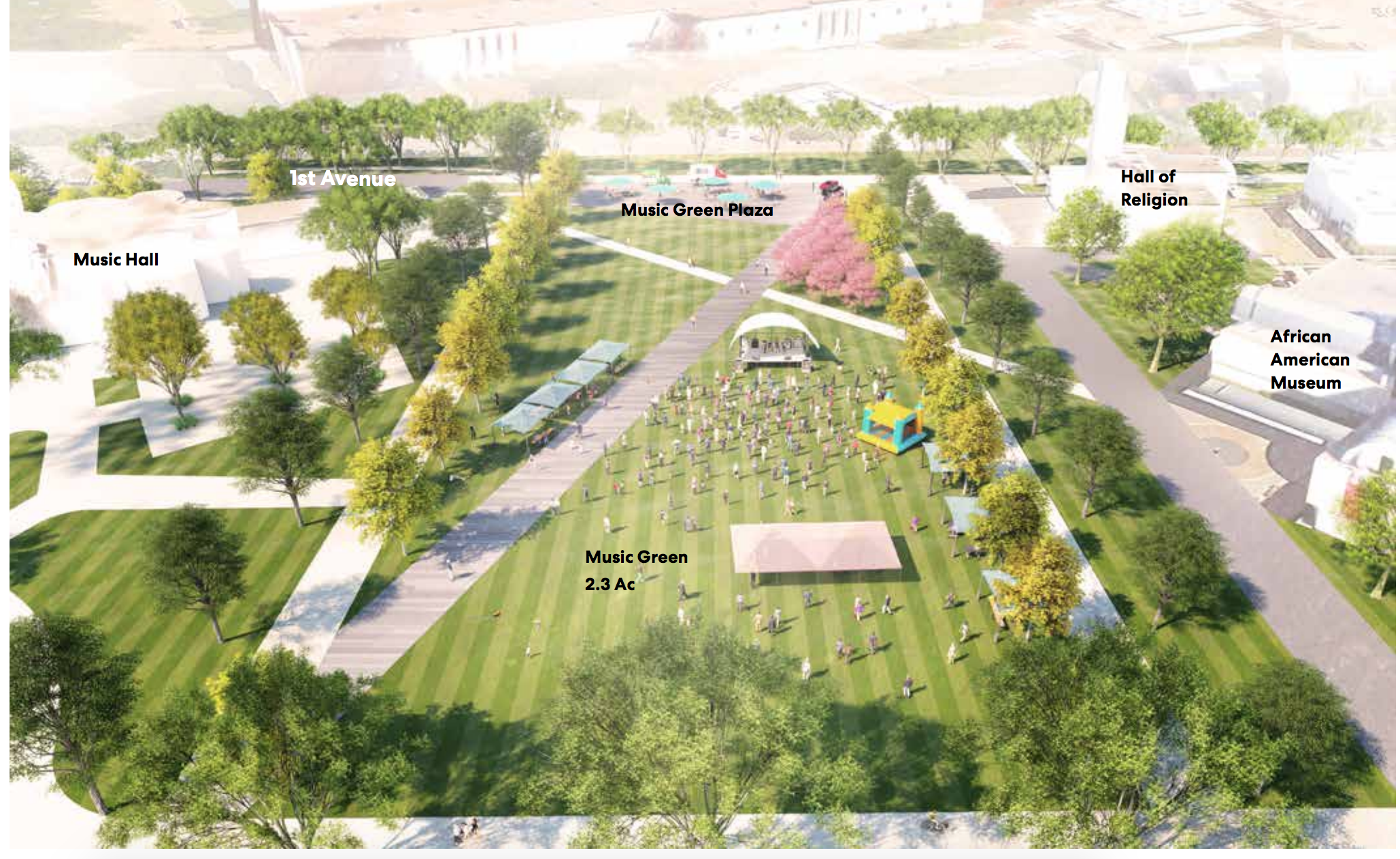 The plans to link the cultural centers at Fair Park through a park.

The other big idea is the 2.3-acre Music Green, which replaces concrete with green space and effectively links many of the cultural institutions inside Fair Park. As Luallen put it, “The vision is connecting the space in a way that is very organic.” The group studied the urban heat island effect at Fair Park, which is how hot it gets as the sun soaks into the concrete. It found that areas with “gray top”—sidewalks—are 25 degrees hotter than ambient and “black top”—parking lots—are 45 degrees hotter.

The Music Green rips all that up and replaces it with grass and trees. It would be “an area of respite,” with the Music Hall on one side and the African American Museum on the other. The northern border is 1st Avenue, which will turn into a pedestrian plaza once it hits the Music Green. This construction is included in the first phase. It looks like a smaller Klyde Warren Park. 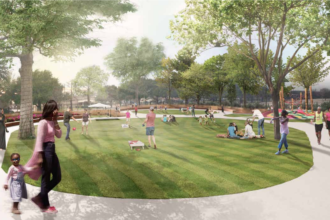 The 1-acre parklet at MLK Boulevard in the Fair Park Master Plan.

The roughly 1-acre MLK Gateway Park will be accessible no matter what’s happening inside in the park. It will welcome visitors entering from South Dallas via Martin Luther King Boulevard. There’s a small walking trail with recreation for kids. It’s a parklet.

Future phases will include other parklets near the Jubilee neighborhood at the park’s northern edge and near Gurley Avenue. The Vietnam Veterans Memorial will also get a parklet and a makeover.

It sounds like the goal is to make these areas more defined, to make it clearer for walkers to understand where they’re going. The Museum Area will be dotted with new trees. The Leonhardt Lagoon and the Cotton Bowl Plaza will be extended, considering how crowded it was during the NHL’s Winter Classic. The Band Shell will be surrounded by trees. 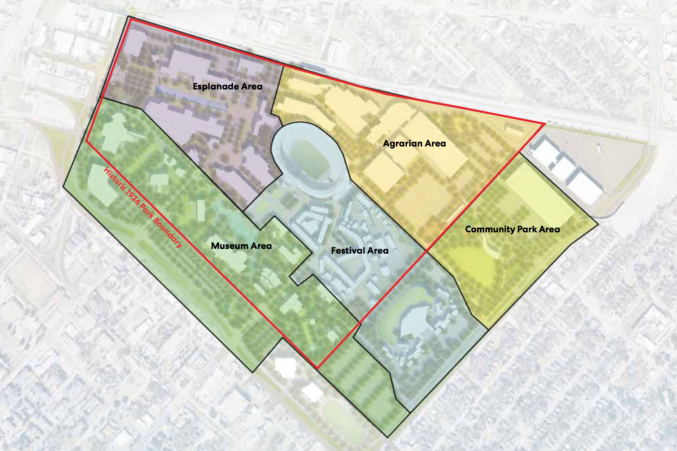 There are plans to install a Blackland Prairie Trail just off Coliseum Street, which will run 4.4 acres to the north side of the park.

There is a major wayfinding initiative. There are more than 20 new installations for pedestrian signage throughout the park. There are plans to highlight programming and history. Cycling trails will have additional signage, too, particularly the planned connection with the Santa Fe Trail along Washington Street. Lighting will get an overhaul throughout the park.

Luallen said it’s an effort to make the 277 acres easier to navigate.

Another part of navigability: the trails. There are two signature features here. The first is a 1.5-mile loop that will take you essentially through the middle of the park. The northern and southernmost borders are the Cotton Bowl and the Leonhardt Lagoon. The plan uses a path adjacent to Washington Street to connect the Santa Fe Trail through East Dallas to Deep Ellum. Those come in subsequent phases, likely the second. Plans also include improved sidewalks around the border of the park with improved entry points near the surrounding neighborhoods, pinned to the park’s public amenities. 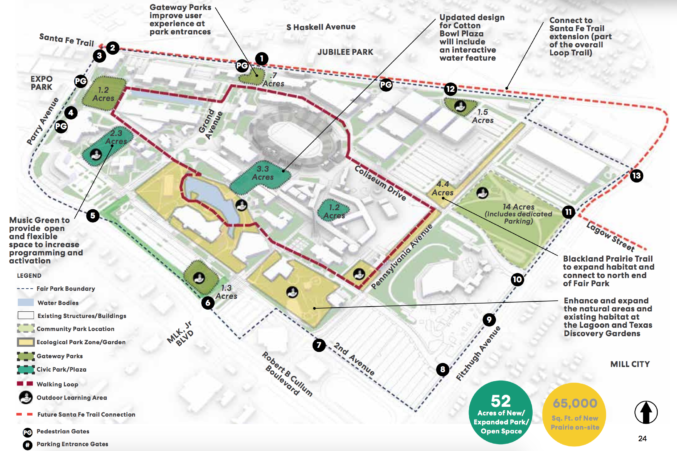 All the planned trails coming to Fair Park, if the master plan is implemented. (Courtesy Perkins & Will)

The plans include planting 1,270 trees and converting 800,000 square feet of concrete into green space. There will be prairie planting areas throughout the park to “increase wildlife habitat, improve stormwater functions, and provide more access to natural environments.” The master plan sets aside about 52 acres of new green space and 65,000 square feet of blackland prairie and native plants along Pennsylvania Avenue, which it refers to as “an exhibit.”

Expect an overhaul of the stormwater system. Perkins & Will hopes to install 24 acres of new stormwater management that will collect and recycle it for use elsewhere. The city will likely have to upgrade the drainage system near Fair Park; the Mill Creek Drainage Relief Project will benefit East Dallas but will not extend this far south.

Part of Fair Park First’s job is to raise money to help pay for this. As of its last 990 filing, in 2019, it had just $1,257 in assets. The first phase alone—the parks—is estimated to cost $85 million. The rest is still TBD. James, the president, said it’s been tough to get support when they don’t have anything to show the philanthropy class. Now they do.

“Our goal is to make sure this is privately funded for at least the first phase,” Luallen said. “We’re looking for state and federal grants” as well.

James said they’ve launched a fundraising committee and has “interest from one of the leading private citizens in the city of Dallas that’s looking to give us a gift.” He didn’t say who. There are plans for a private boutique hotel near the Museum Green, which would include some garage parking and surface-level retail. Luallen said he was confident a developer would cover that cost. He also said a parking deck near the community park on Fitzhugh would be privately funded. The Fitzhugh parking deck would come in the first phase; the hotel would be in the second.

Fair Park First is also hoping to see savings from the efforts of the park’s operator, Spectra, in operational efficiencies. That was one of the major plusses of bringing Spectra on to operate the park a few years back, which kicked the master plan into gear. James also said he was hopeful that the vendors would “give us more favorable terms and conditions than we’ve had previously.”

They’re also seeking to rent out some of the vacant buildings. They’re in talks with a nonprofit known as Spark! to take over Science Place 1. Another nonprofit called the Red River Music Fund would “celebrate all things Texan” and include a banquet space in the museum with a food and beverage component for extra revenue. James said a potential tenant would need to help with deferred maintenance on the buildings.

“I’m not sure we’ll ever get a master plan this beautiful again,” said Park Board President Calvert Collins-Bratton. “This is certainly our gold standard.”

This also isn’t the first master plan for Fair Park. It’s actually partially based off the concept and design for the 1936 Texas Centennial Exposition. It also pulls in other elements from other plans; the concept for the Music Green, for instance, was first presented in 2003’s Hargreaves Plan. But this is the first since the city handed it over to a competent private operator, one who, before the coronavirus shut down events, had booked the Rolling Stones in the Cotton Bowl and packed it out with the NHL’s Winter Classic. Now, the real work starts: getting City Council approval, then putting the park back in Fair Park. And everything else that Fair Park First hopes to accomplish.